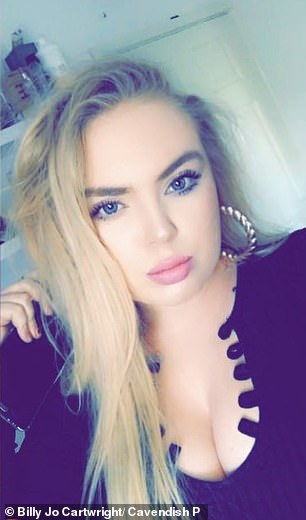 A mother has been banned from the road after she stole her boyfriend’s Range Rover after bingeing on WKD and drove the £3,500 car the wrong way down a motorway slip road before smashing into a tree.

Billy Jo Cartwright had been drinking with friends in a Travelodge car park earlier this year – in breach of January’s national lockdown rules – and downed ‘three to four bottles’ of the vodka drink.

Cartwright’s best friend, Becky-Jo Wood, tried to stop her but the drunk 22-year-old then jumped into the driver’s seat of her boyfriend’s Evoque and careened around the car park of the hotel.

The mother-of-one then veered the wrong way onto the sliproad and into the the path of oncoming traffic leaving the M60 motorway near Birch Services at Rochdale, Greater Manchester.

She tried to swerve the two tonne car around but lost control of the vehicle, mounted a grass verge and ploughed into a tree.

Cartwright’s unnamed boyfriend, 30, rushed over to the crash scene whilst the shameless mother-of-one tried to falsely pin the blame on Miss Wood.

Tests showed Cartwright, of Rochdale, who is hoping to become a veterinary nurse, was more than twice the alcohol limit. 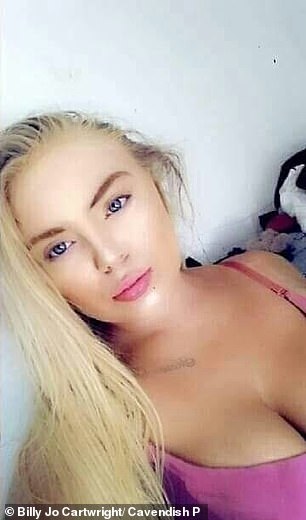 Billy Jo Cartwright, 22, binged on bottled of WKD before she got behind the wheel of her boyfriend’s £3,500 Range Rover, drove it the wrong way down a motorway slip road, and crashed into a tree

She was sentenced to an 18-month community order and 120 hours unpaid work.

Cartwright was also banned from driving for two years and will have to abide by a two month curfew from 8pm to 6am.

The incident occurred on January 16 after the group met up for an impromptu ‘al fresco’ drinks party.

Prosecutor Lisa Boocock told the court: ‘This was in the middle of the Covid pandemic and all in breach of Covid rules.

‘Miss Wood saw this defendant drinking a substantial amount of alcohol. Between the lines, others were as well.

‘Miss Wood saw this defendant drink three-to-four bottles of WKD. The defendant then took the car keys and got into her boyfriend’s Range Rover Vogue.

‘Miss Wood came outside to have a cigarette and saw the defendant and went to the driver’s side and tried to get the keys.

‘But the defendant wouldn’t hand them over and Miss Wood then got into the passenger seat of the vehicle.

‘The defendant drove on the wrong side of the road, into the face of oncoming traffic, and then went onto the slip way, nearly reaching the motorway.

‘The defendant then accepts that she loses control. She went onto a grass verge and then hit a tree and this brought everything to a halt.

‘One of the Costa staff [who witnessed the crash from a shop in the car park] ran over to see if everything was okay whilst the defendant asked Miss Wood to say that she was the driver and said she would give her some money if she did. 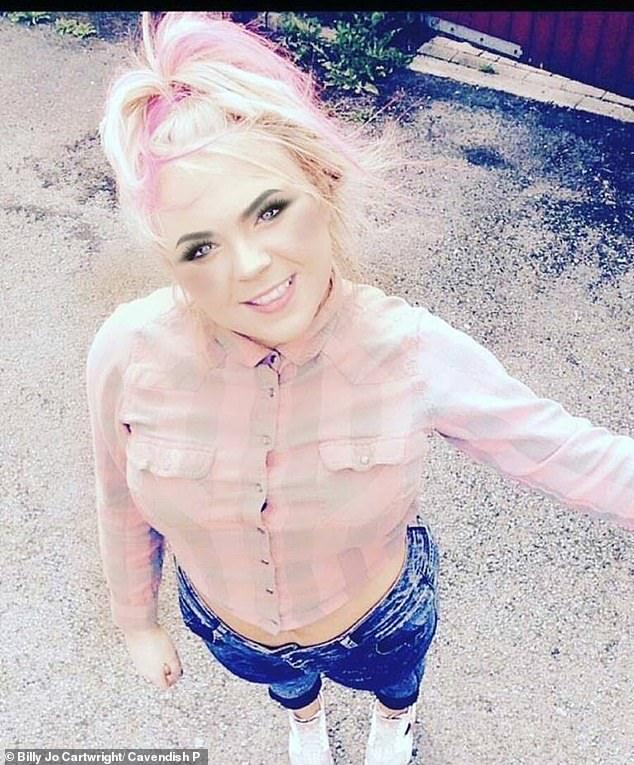 The mother-of-one, who is hoping to become a veterinary nurse, was more than twice the alcohol limit 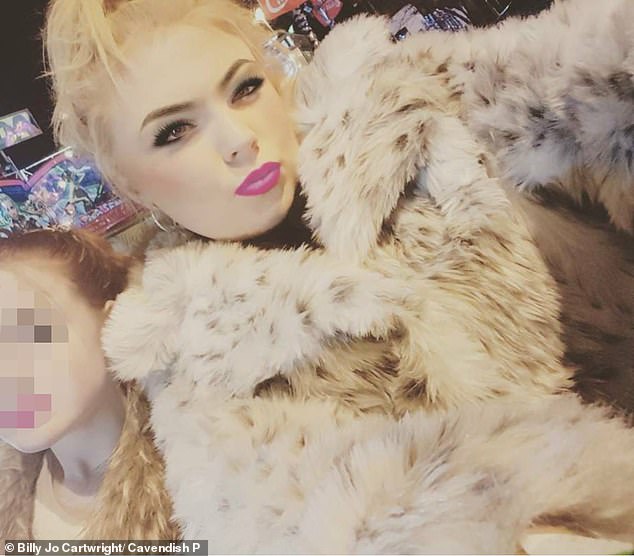 ‘The Costa staff member saw cans and bottles of WKD in the car. Then the defendant’s boyfriend ran out. She ran towards him and said: ‘Look what she’s done!’ indicating it was Miss Wood’s fault.

‘When the police arrived, the defendant said Miss Wood was the driver but was then arrested and failed a breath test.’

Tests showed Cartwright had 79 micrograms of alcohol in 100 millilitres of breath. The legal limit is 35mg. 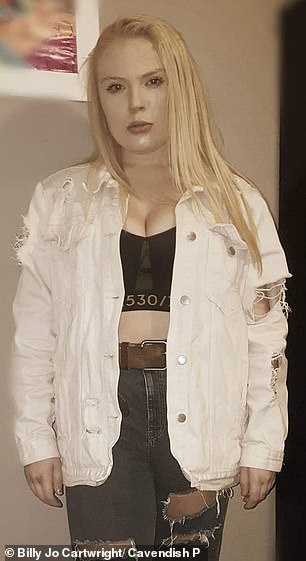 She was sentenced to an 18-month community order and 120 hours unpaid work. Cartwright was also banned from driving for two years and will have to abide by a two month curfew from 8pm to 6am

Defence counsel Iain Johnstone indicated that Cartwright had been pressured to drink the alcohol and that she had a troubled upbringing.

He said: ‘She accepts that she did not have permission to drive that vehicle.

‘She went with her friend to the Travelodge where alcohol was being consumed and she was goaded or plied with alcohol with people saying, ‘Go on, drink it!’ She did and panicked and became fearful as her boyfriend is older and he’s a big chap. She had never driven a car before.’

‘She realized that she was going the wrong way and tried to turn it around, but it was a big and heavy vehicle. She has had a troubled upbringing but wants to start a veterinary nurse course.’

Sentencing Cartwright, the judge Mr Recorder Nicholas Clarke QC told her: ‘Why you were at the service station at a time of Covid drinking with your friends at the Travelodge is quite beyond me.

‘But you were risking the spread of this terrible disease and you were not doing your bit to protect others. At the time, you got very drunk then for whatever reason, you decided to have a drive in a very heavy vehicle.

‘You put at risk your own life, that of your passenger who was trying to stop you, and also other road users. It was fortunate that nobody was seriously injured.

‘You then tried to bribe the passenger then you tried to blame her when the police attended.

‘You could be sent to jail and you would deserve it. But you have personal difficulties and I hope what has happened will steer you towards a more positive future.’