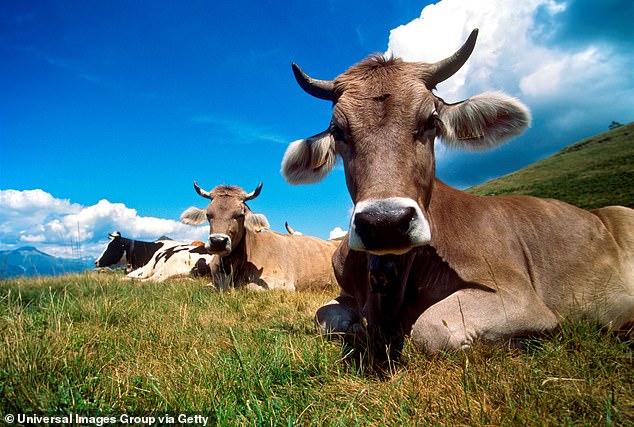 The Secret World Of Weather

Here is the local weather forecast, presented by Mother Nature: sheep are huddling together, spiders are spinning smaller webs, the scarlet pimpernel flower is beginning to close its petals and aircraft vapour trails are spreading out across the sky.

Tristan Gooley is the author of The Natural Navigator, which explained — among other things — how to use a puddle as a makeshift compass. In his latest book, he reveals natural ways of predicting very local weather.

It’s a skill which can come in very handy. In New Jersey in 1777 the army of George Washington was pinned down by the dastardly redcoats. Luckily, George was an amateur meteorologist who kept a weather diary.

In his new book, Tristan Gooley claims that there is no evidence for the widely held belief that cows lie down when rain is on the way (stock image)

He noticed that wind was coming from the north-west, which meant colder weather overnight. So he was able to plan an escape route over cold, hard ground that would previously have been too soft and muddy.

Natural forecasts are all around us, if only we knew where to look. Don’t bother studying cows, though.

According to Gooley, there is no evidence for the widely held belief that they lie down when rain is on the way. No, birds are much more useful.

Birds ride air currents known as thermals, rising wafts of hot air created when the sun heats the ground. The higher the birds, the stronger the thermals. This means the air is unstable and bad weather is on the way.

Birds also act as natural weathercocks. They like facing into wind, partly because they take off into the wind and partly because facing the other way ruffles their feathers.

If you notice a flock of birds looking one way in the morning but another way in the afternoon, it means a change of wind direction and an imminent change in the weather.

It’s perhaps no surprise to discover that the best way of forecasting local weather is to read the clouds. Gooley writes extensively and in great detail about clouds, but here are some of the highlights: 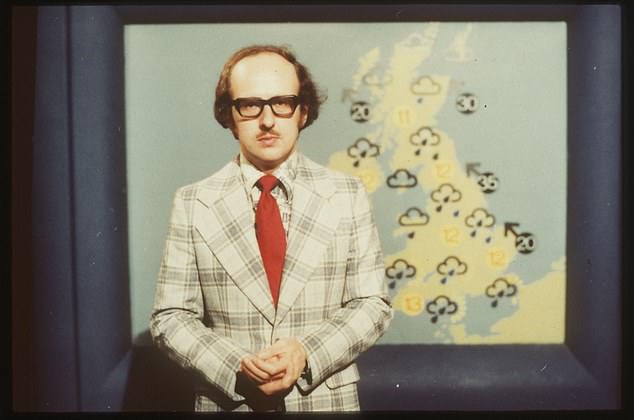 Not all clouds are bad news. ‘However sombre a cloud appears,’ says Gooley, ‘if it has a neat horizontal base and good visibility below, it is unlikely to rain on you.’

And let’s not forget fog. It may be unpopular, but it forms under clear skies and is a sign of good weather to come.

Even the night sky offers a makeshift forecast. A clear moon means dry, clean air, and so no prospect of clouds or rain in the coming hours. In the winter, though, lack of cloud cover usually means a frost.

Dry, clean air also robs the stars of their twinkle. If you notice that the stars seem to gradually twinkle more during the evening, it means moisture levels are rising and — you guessed it — bad weather could be on the way.

The book is full of fascinating trivia. In theory, it should be possible to make a forecast by watching a baseball game. According to Gooley, home runs are more likely just before bad weather because balls — and all other projectiles — travel further in humid air. 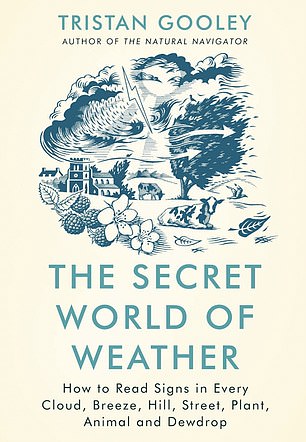 In his book, Gooley also claims that the night sky offers a makeshift forecast

He also suggests that wind is sexist. Men and women react differently to a cold breeze: men face the wind, but women turn away because their breasts are more sensitive to low temperatures.

However, we all have the same reaction when the breeze reaches Force Six (25-31 mph, large branches in motion).

This marks the moment when we noticeably begin walking more quickly to reach shelter.

If you fail to predict rain and get caught in a shower, did you know that some trees provide better shelter than others? The bigger the leaves, the more rain that will dribble through.

‘During a heavy shower, beech leaves allow twice as much rain through as pine needles,’ says Gooley. ‘Oak makes one of the worst umbrellas.’

Look for a tree whose branches point upwards, channelling water to the trunk.

If you really want to stay dry, head for the nearest juniper bush. It may be small and prickly, but Gooley notes: ‘It is so good at keeping the rain off the ground that there is sometimes a micro-desert under these bushes.’

Knowledge of local weather isn’t just useful for trapped American generals, it is a great asset if you’re planning to commit serious crime.

In 1986 a man called Glen Wolsieffer called police in Pennsylvania to report that an intruder had murdered his wife, Betty. Police were immediately suspicious. It had been a cold night, and the ‘intruder’ had supposedly clambered over the roof: yet there were no footprints in the dew.

There was also dew on Betty’s car, but none on Glen’s, even though he claimed to have returned home at 2.30am and said he hadn’t been out since.

A forensic meteorologist concluded that he was lying: he had been out and the warmth of the engine had dried the car. Mr Wolsieffer was prosecuted and jailed for murder.

The story of the killing and the investigation was later told in a true-crime documentary. It was called Dew Process. Of course it was.