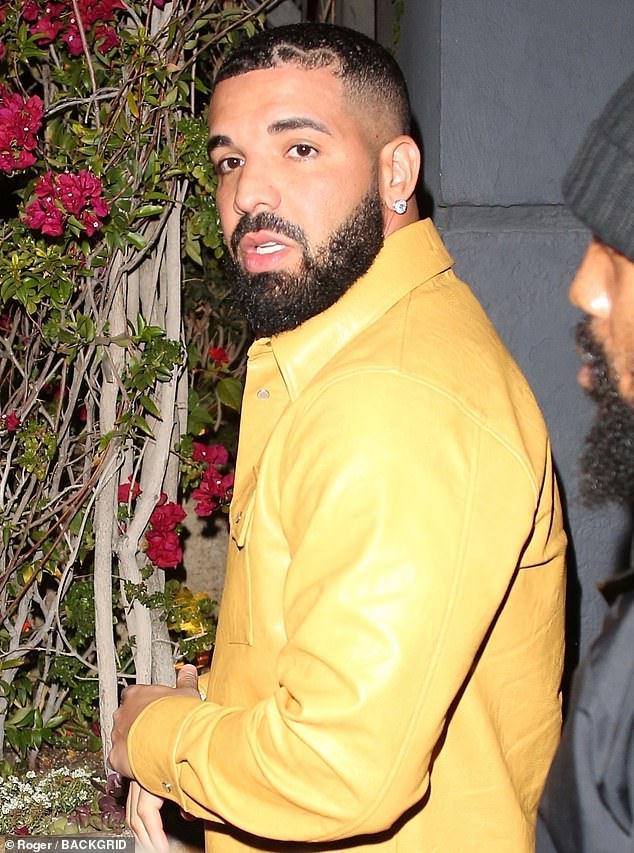 Drake and The Weeknd were spotted stepping out in Hollywood on Wednesday evening before being joined by French Montana and Chris Brown.

The singers were attending a star-studded event at The Highlight Room to commemorate fellow musician Belly’s 37th birthday.

Although all four of the performers were seen outside of the party, only the Go Crazy songwriter documented his experience during the function on his Instagram account.

Big night out: Drake and French Montana were spotted arriving at a birthday party held for fellow rapper Belly before being joined by performers The Weeknd and Chris Brown on Wednesday evening

Drake was spotted wearing a bright yellow button-up jacket on top of a white t-shirt while arriving at the event.

The What’s Next songwriter complemented his tops with a pair of skinny beige pants and a clean white set of Nike Air Force 1’s.

The 34-year-old notably had a heart shaved above the left portion of his forehead and accessorized with a pair of diamond earrings.

The Weeknd kept it much more dressed-down during the event, as he wore an all-black outfit that included a comfortable-looking bomber jacket.

Dressed to impress: All four of the performers wore eye-catching outfits while attending the birthday party. Brown was the only one of the four who documented his time at the event on his Instagram account

Taking inspiration: French Montana was dressed in a flashy button-up shirt featuring a graphic of the Venus de Milo

The 31-year-old hitmaker paired his top with a slim pair of jeans and shiny leather high-top boots.

The Can’t Feel My Face singer also wore a black facial covering to keep himself safe during the star-studded event.

French Montana opted for a much more flashy clothing ensemble for the birthday party, as he was dressed in an eye-catching button-up shirt featuring a graphic of the Venus de Milo. 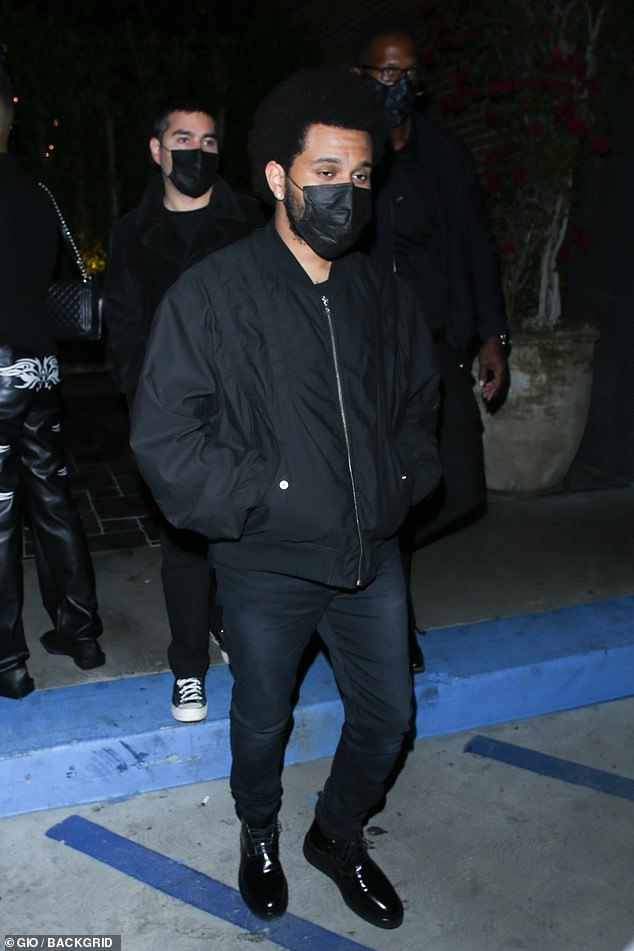 The 36-year-old rapper contrasted his top with a highly distressed pair of blue jeans and a multicolored set of sneakers.

The performer accessorized with multiple articles of jewelry, including several necklaces and a watch.

At one point, the songwriter put on a white facial covering before coming into contact with other partygoers. 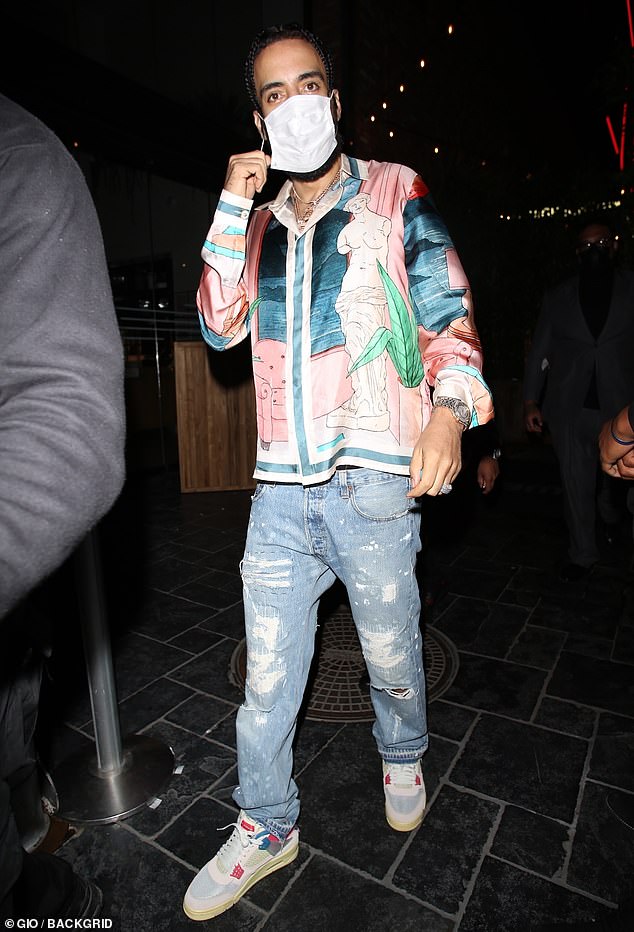 Staying safe: At one point, French Montana was seen putting on a white facial covering to keep himself protected while arriving at the event

Brown – who has been friends with Drake for years even though they both dated Rihanna – arrived at the event while surrounded by members of his entourage, many of whom kept him company during the birthday party.

The 31-year-old rapper appeared to be keeping it casual as he wore a yellow Stussy button-up jacket featuring a light brown collar.

The No Guidance songwriter was also dressed in a black t-shirt featuring a graphic print of a basketball player, which he later showed off in an Instagram photo.

Brown complemented his tops with a pair of slightly baggy blue utility pants that featured various messages and designs printed across their construction.

Fresh dressed: Drake wore a yellow button-up jacket while stepping out. The Grammy-winning artist paired his top with a pair of beige jeans and white sneakers

The hitmaker tied off his outfit with a baseball bap and a pair of Adidas sneakers.

He also added several articles of jewelry to his outfit, many of which stood out from the flatter tones of his tops.

During the event, Brown posed for a picture with a member of his entourage, which he later posted to his Instagram account the following morning. 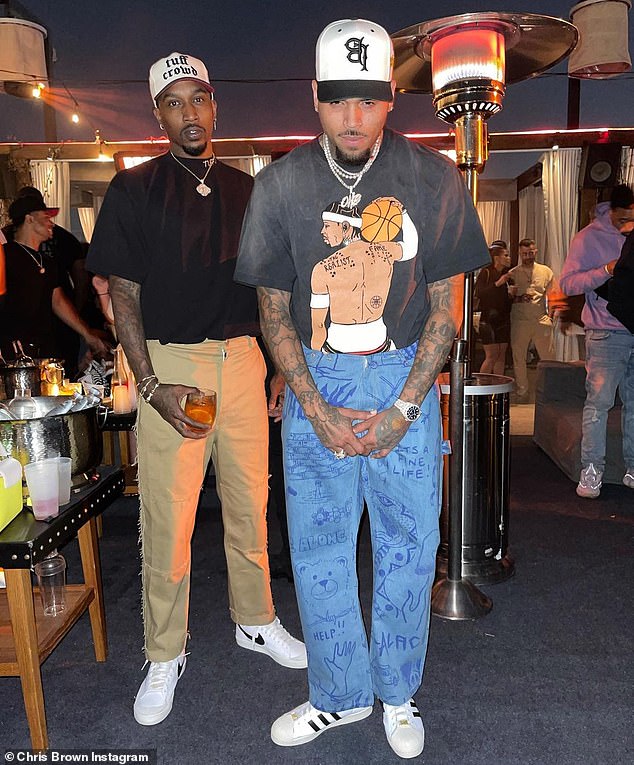 Showing off: On Thursday morning, Brown posted a photo that had been taken during the event to his Instagram account and simply wrote ‘DA VIBES’ in the post’s caption 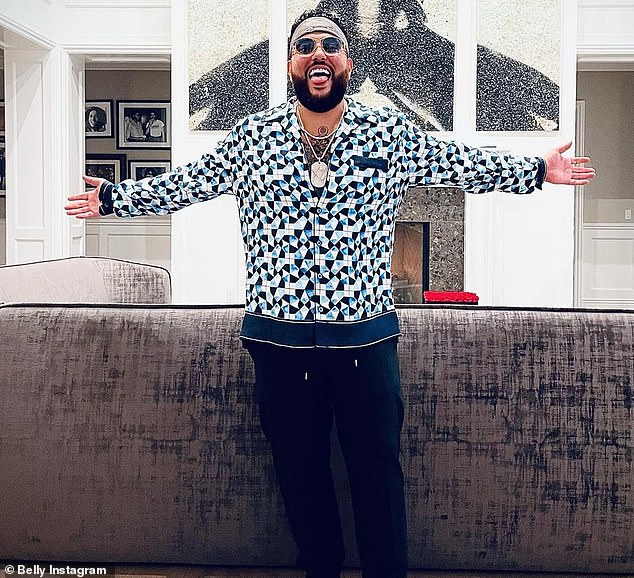