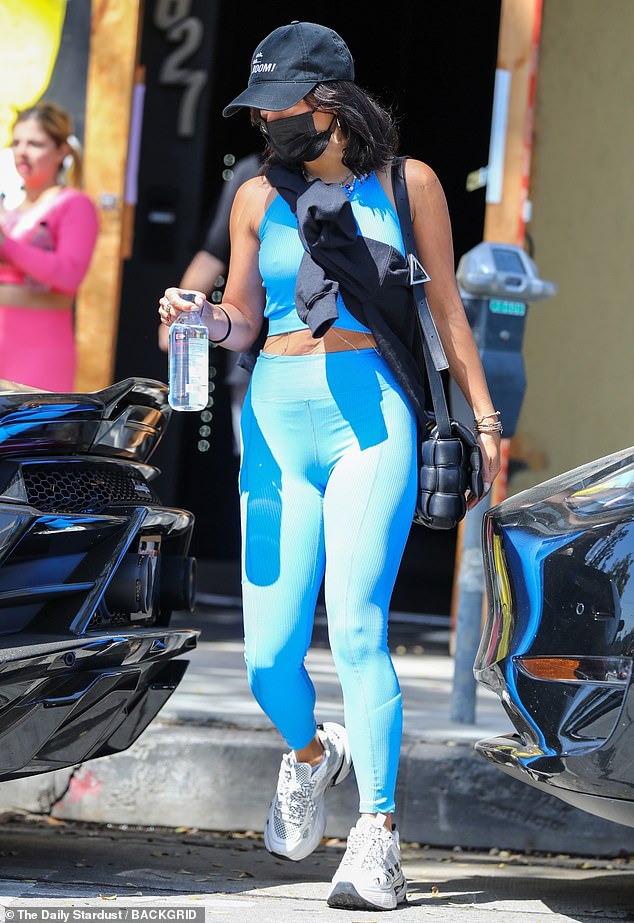 Vanessa Hudgens looked fit and ready to take on the world after leaving the Dogpound Gym in West Hollywood on Thursday.

The Disney Channel alum was seen exiting the fitness center and celebrity hangout with a drink in her hand before entering her car and driving off.

During the 32-year-old’s trip to the gym, she was shown twerking in a video posted to the Instagram account of her BFF GG Magree, who was also present during the workout session.

Taking care of herself: Vanessa Hudgens was seen leaving the trendy Dogpound Gym in West Hollywood on Thursday afternoon

Hudgens was dressed in a light blue athletic crop top that displayed just a bit of her toned tummy.

The Spring Breakers actress paired her shirt with a matching pair of athletic leggings that clung tightly to her shapely form and wore a pair of large multicolored running shoes.

The performer kept a black sweater wrapped around her shoulders and carried a small purse to keep her belongings close during the shared outing.

The Powerless star wore a facial covering to keep herself safe while spending time in public and accessorized with several articles of jewelry. 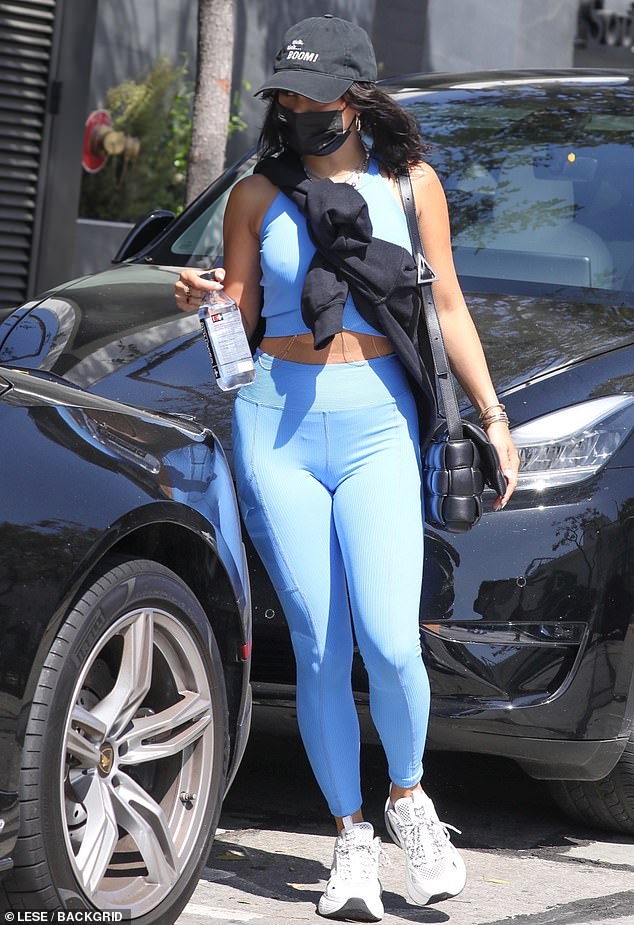 Cool outfit: The Spring Breakers actress wore a light blue athletic top and a matching set of leggings that clung tightly to her toned form 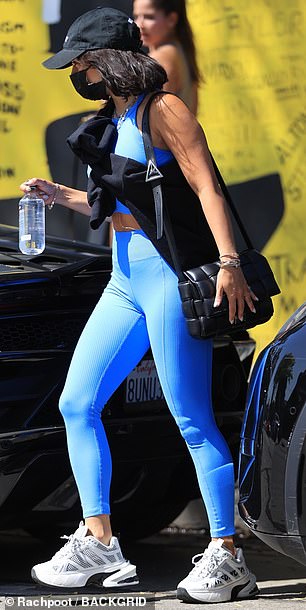 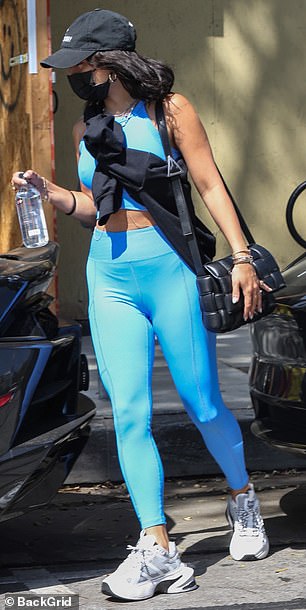 Extra storage: The Disney Channel Alum kept a small black purse with her during her shared outing. She also wore a cap bearing a graphic for her upcoming film Tick, Tick… Boom!

During her workout, the actress took part in a video that was posted to Magree’s Instagram Story.

Although the only deviation in the actress’ ensemble was that she had tied her hair into two ponytails, the 32-year-old Australian kept it casual in a light gray athletic top and form-hugging athletic shorts.

The BFFs were shown spinning around on a workout pad before rotating around once and landing with their derrieres pointed to the camera, at which point they began to gyrate for the camera.

The text graphic that was added to the video read: ‘We take working out v serious.’ 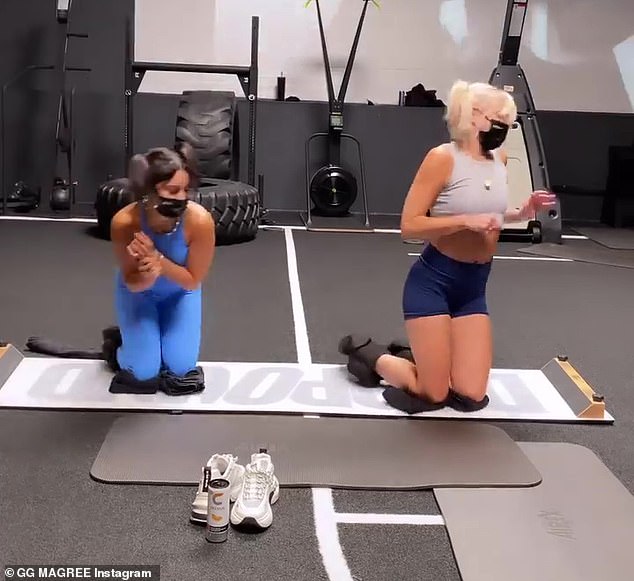 Getting into position: Hudgens was also featured in a video posted to GG Magree’s Instagram Story where the two were seen spinning around on a workout pad 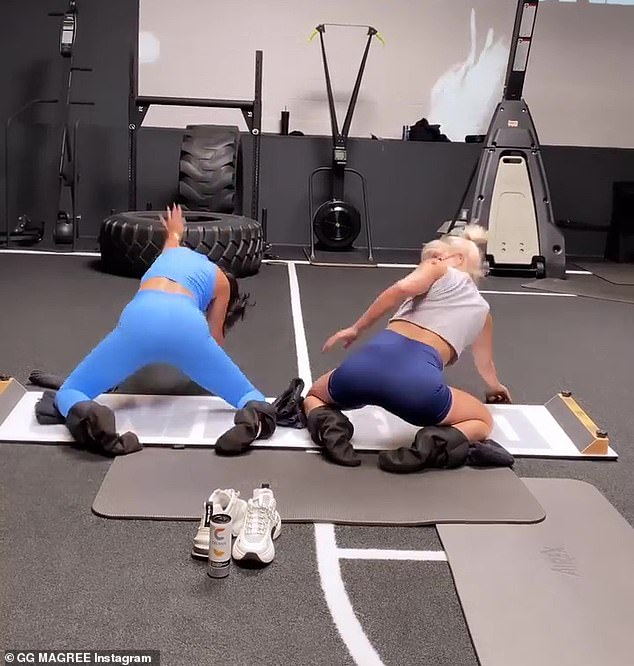 Something to do: The BFFs then began to twerk for the camera after spinning around successfully

Hudgens and Magree are often featured in each other’s Instagram posts, along with several other mutual friends of theirs.

On Saturday, the BFFs were featured alongside their pal Vince Rossi in a set of selfies that were posted to the actress’ account.

The three friends were seen giving their best looks to the camera while spending time in a greenery-surrounded backyard.

Hudgens also wrote a short message in the post’s caption that read: ‘Always a vibe.’ 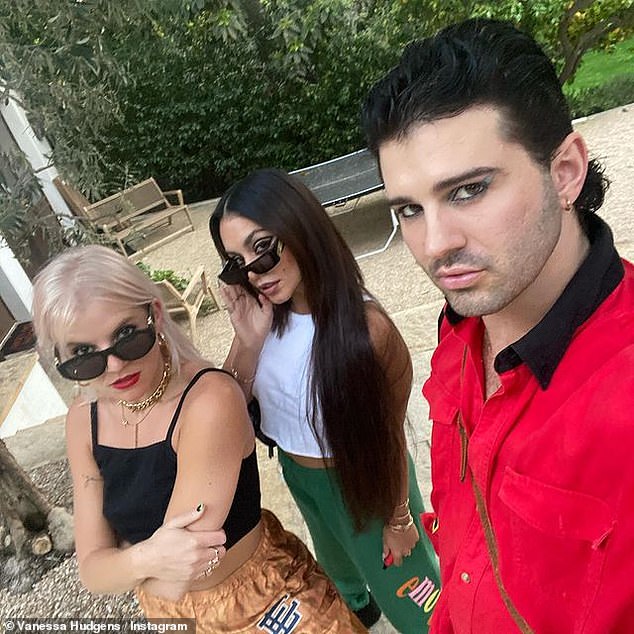 Three’s company: Earlier this week, the two pals posed for a few selfies taken by Vince Rossi, which were later posted to Hudgens’ Instagram account