PICTURED: Chris Brown’s $230k Porsche 911 is damaged after driver CRASHES into his prized sports car as he exits star-studded bash

Chris Brown’s prized Porsche 911 was left damaged in the early hours of Friday morning, as the star exited a star-studded party in West Hollywood.

The Loyal hitmaker, 31, was among a number of stars attending a party at hotspot The Nice Guy when his sports car, worth an estimated $230,000, was hit.

Police were spotted arriving on the scene to assess the damage and the situation around the crash, which appeared to happen in the venue’s parking lot.

Damaged: Chris Brown’s )left) prized Porsche 911 was left damaged in the early hours of Friday morning, as the star exited a star-studded party in West Hollywood

Pictures from the scene show a black car completely wrecked after hitting the vehicle, as officers blocked the streets with their vehicles.

Virginia native Chris, who donned a black ensemble with gold chains, looked unfazed as he eventually made his departure at the steering wheel of his car.

MailOnline has contacted a representative for Chris Brown for comment.

Beloved of celebrities the world over, the Porsche 911 is one of the most popular sports cars and has barely changed in design over the past five decades. 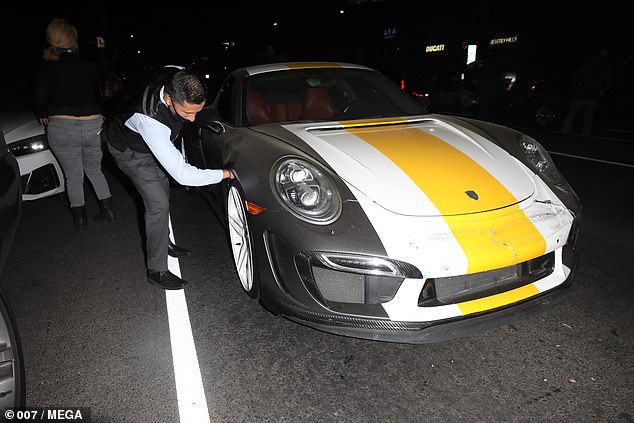 Assessed: A valet was seen assessing the damage on Chris’ car after the shock crash occurred 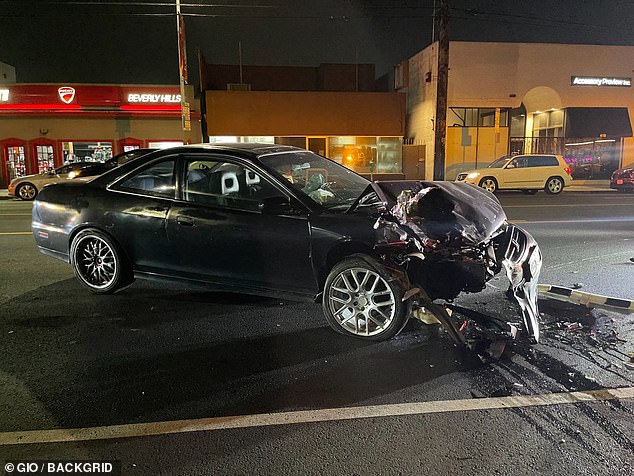 Chris owns the 2016 Porsche 911 Turbo S which comes standard with a 3.8-lighter six-cylinder engine rated at 560 horsepower and 516 lb-ft of torque.

However, the singer called on TopCar to pimp his ride with a Stinger GTR body kit and increased the horsepower by 60 more ponies.

They also added an additional 95 lb-ft of torque to the vehicle, which allows the sports car to reach 60 mph in less than three seconds.

He also invested in a new front bumper with an integrated front splitter and a rear bumper that comes with a diffuser to help provide better stability when travelling at rapid speeds.

Although Chris has not revealed how much he paid for the modified 911, the starting rate for the car is $188,100, while the Stinger GTR kit costs approximately $40,000.

Go Crazy hitmaker Chris has been particularly proud of his speedy purchase, and in 2016 shared a plethora of snaps of himself posing beside the vehicle.