By Caroline Graham For The Mail On Sunday In Los Angeles


The Duchess of Sussex will not go to Prince Philip’s funeral for medical reasons – but Prince Harry will definitely attend.

Buckingham Palace last night confirmed that Meghan, whose second child, a girl, is due in early summer, will not fly on ‘physician’s advice’.

Sources close to the couple had previously said they were ‘united in grief’ with the rest of the Royal Family, but added that Meghan, 39, who suffered a miscarriage last year, would seek medical guidance before making the 11-hour flight from California.

The Sussexes have faced criticism for accusing the Royal Family of racism during their controversial interview with Oprah Winfrey interview which aired last month while Prince Philip was in King Edward VII’s hospital in London. Sources say the Duke was briefed about the content of the interview after he left hospital, where he had been treated for a heart condition.

The media gathered outside Harry and Meghan’s £11 million estate in Montecito, a two-hour drive north of Los Angeles, after news of Philip’s death was announced on Friday.

One onlooker said: ‘There have been lots of cars coming and going from their place but no one has seen Prince Harry.’

Harry, 36, is exempt from Covid quarantine because he is attending a funeral, but will be expected to take a coronavirus test before leaving the US and on the second and fifth day after returning to Britain.

It is unclear when he will make his transatlantic flight, but rumours of his ‘imminent departure’ were rampant.

A source said: ‘Everyone expects him to leave by Monday at the latest. There is a private 737 jet at Santa Barbara airport which everyone is watching in case he’s taking that. Every hour the word goes out that his departure is imminent but, so far, they’ve been false alarms.’

Last January, it was reported that Prince Philip was ‘deeply disappointed’ by the couple’s decision to walk away from the Royal Family and start their new life in the US

The jet in question belongs to American self-help guru Tony Robbins, but is available for private charter. Mr Robbins sold his home in Montecito last year.

Harry was last photographed with his grandfather in May 2019 shortly after the birth of son Archie, when he and Meghan took the newborn to Buckingham Palace.

In an interview with James Corden in February, Harry described Zoom calls with the Queen and Prince Philip during lockdown, but joked that his grandfather was so impatient he would never press the ‘leave meeting’ key, instead choosing to slam shut his computer to end a call: ‘He just goes “doof”!’

Harry enjoyed a close relationship with his grandfather. An aide said: ‘They shared a love of all things military and were extremely close at one stage. 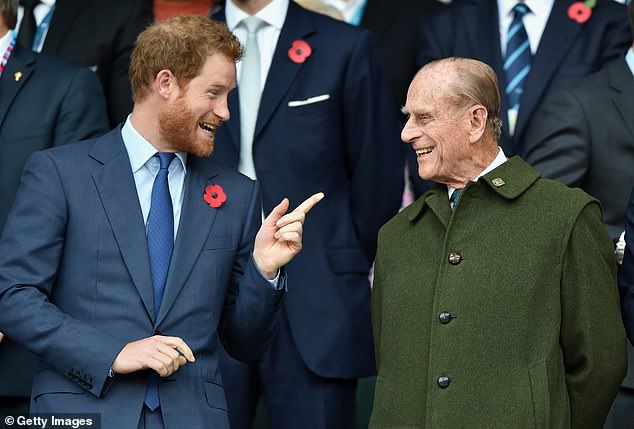 ‘Whenever you saw Philip and Harry together, they were always laughing. The Duke was very proud of Harry’s military service.’

But last January, it was reported that the Duke was ‘deeply disappointed’ by the couple’s decision to walk away from the Royal Family and start their new life in the US.

Last night, Meghan’s estranged father Tom Markle said: ‘I would like to send my condolences and sympathy to Her Majesty the Queen and the British people for the loss of Prince Philip. He was a great example of service to his country and love to his wife.’

Harry’s attendance at Saturday’s funeral will be the first time he has been seen in public with his family since the frosty Commonwealth Service at Westminster Abbey in March 2020, when it was said that neither Prince William nor wife Kate spoke to Meghan or Harry.