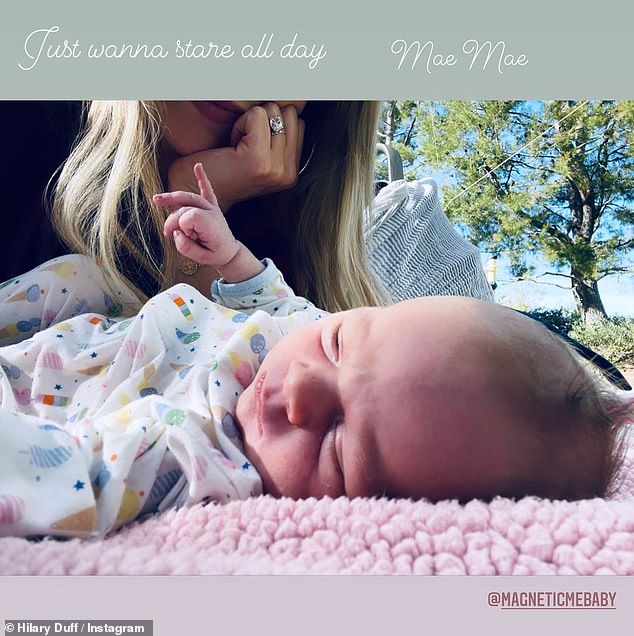 The 33-year-old, who laid next to Mae in the grass, gushed in her post’s caption that she ‘just [wants to] stare all day’ at her new arrival.

Duff’s post comes not long after Younger creator Darren Star revealed details about the show’s upcoming spinoff, which will be focused on the Cheaper By The Dozen actress’ character.

In the shot, Duff could be seen wearing a dark top, which contrasted well with the bright tone of her blonde hair.

Her newborn daughter, whom she welcomed late last month, wore a cute patterned onesie while resting on a pink blanket.

The Lizzie McGuire star welcomed her newest child with her husband, Matthew Koma, whom she first became romantically involved with in 2018.

The now-married couple first met in 2015, when they collaborated on her fifth studio album, entitled Breathe In. Breathe Out. 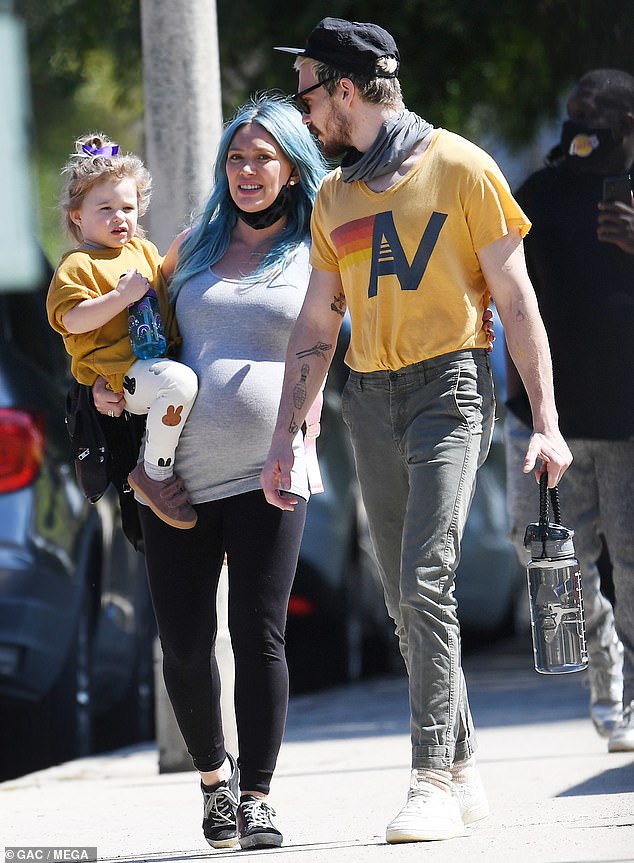 Proud parents: The Lizzie McGuire star welcomed her new daughter with her husband Matthew Koma, whom she married in 2019; the two are pictured together in March 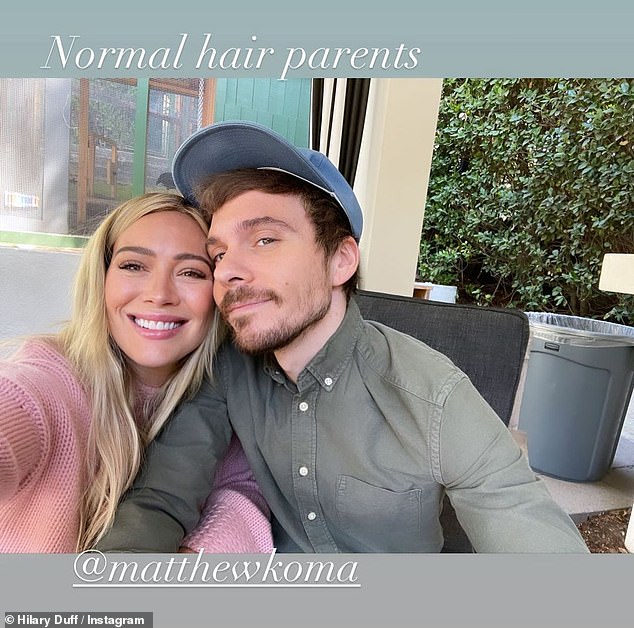 Adding another one: The married couple also welcomed a daughter named Banks in 2018, just over a year before they tied the knot

Duff and her 33-year-old husband welcomed their first daughter, Banks, aged two, just over a year before they tied the knot in December of 2019.

The actress also shares a son named Luca, aged nine, with her former husband Mike Comrie, whom she was married to from 2010 until 2016.

The Clarity co-writer has acted as a stepfather to his wife’s older son ever since they became married.

Prior to her two marriages, Duff was in high-profile relationships with singers Aaron Carter and Joel Madden.

The Agent Cody Banks actress’ post comes not long after Younger series creator Darren Star revealed a few key details about the show’s planned spinoff, which will be centered around the performer’s character, Kelsey Peters. 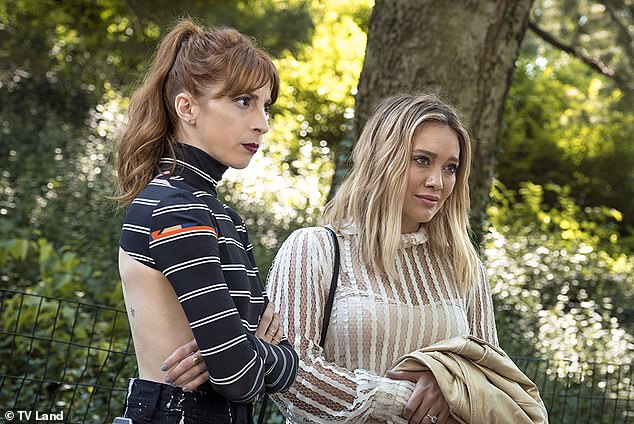 Keeping it going: Duff shared her picture not long after Younger creator Darren Star revealed a few key details about the show’s planned spinoff, which will be centered on her character, Kelsey Peters

The 59-year-old producer recently spoke to Variety and gave the media outlet his take on the project’s premise, and remarked, ‘The best way to describe it is that it would be a bit of a female Entourage with Kelsey as the lead.’

The writer also noted that the new show would not feature any of the other characters from Younger and that Duff’s character would ‘be following another dream.’

Although Star expressed enthusiasm about working on the project, he did point out that nothing had been confirmed about the show just yet and that everything was still technically up in the air. 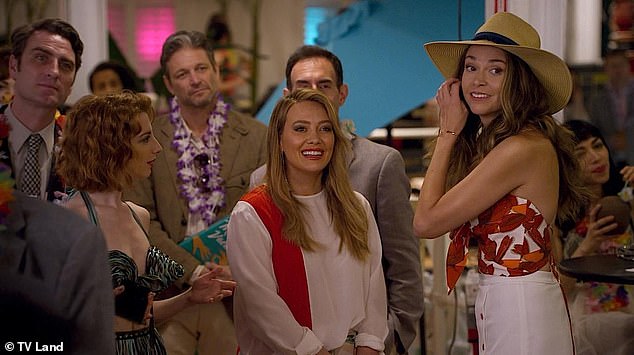 Going her own way: The producer expressed that the new show would not feature any of the other characters from Younger and that Peters would ‘be following another dream’ 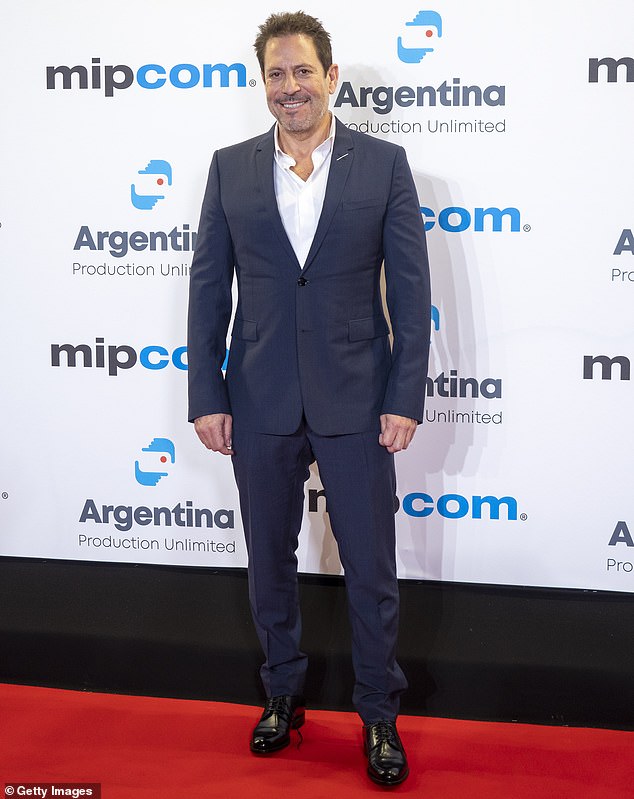 Maybe, maybe not: Star made a point of noting that the project had not been officially picked up as of yet and expressed that ‘we never know if these things are going to happen’; he is pictured in 2019