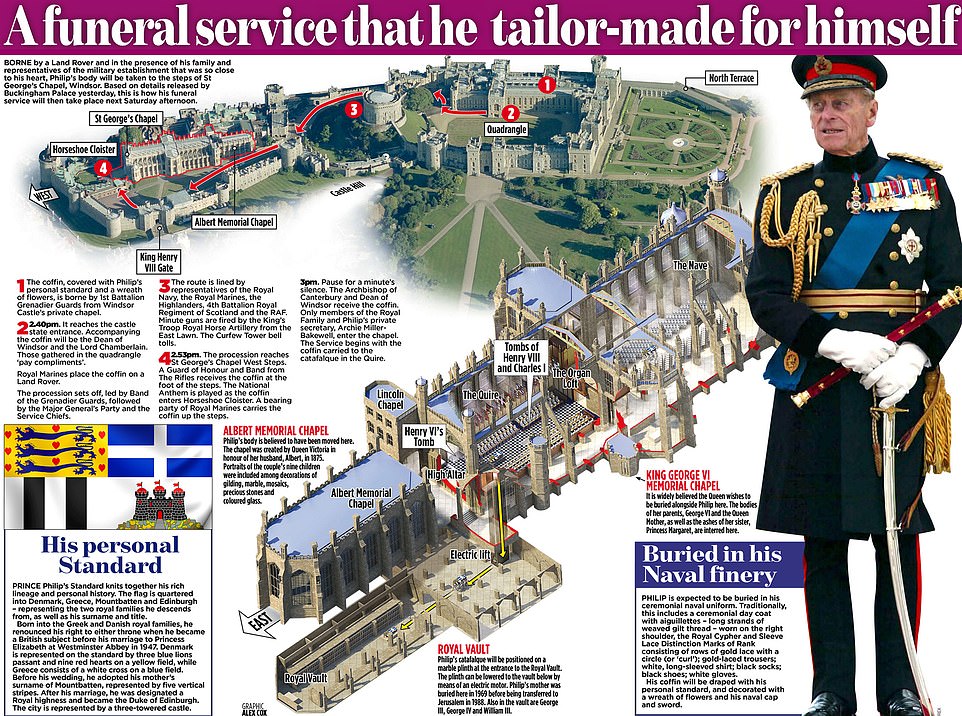 Borne by a Land Rover and in the presence of his family and representatives of the military establishment that was so close to his heart, Philip’s body will be taken to the steps of St George’s Chapel, Windsor.

Based on details released by Buckingham Palace yesterday, this is how his funeral service will then take place next Saturday afternoon.

Based on details released by Buckingham Palace yesterday, this is how his funeral service will then take place next Saturday afternoon

1 The coffin, covered with Philip’s personal standard and a wreath of flowers, is borne by 1st Battalion Grenadier Guards from Windsor Castle’s private chapel.

2 2.40pm. It reaches the castle state entrance. Accompanying the coffin will be the Dean of Windsor and the Lord Chamberlain. Those gathered in the quadrangle ‘pay compliments’.

Royal Marines place the coffin on a Land Rover.

The procession sets off, led by Band of the Grenadier Guards, followed by the Major General’s Party and the Service Chiefs.

3 The route is lined by representatives of the Royal Navy, the Royal Marines, the Highlanders, 4th Battalion Royal Regiment of Scotland and the RAF. Minute guns are fired by the King’s Troop Royal Horse Artillery from the East Lawn. The Curfew Tower bell tolls.

4 2.53pm. The procession reaches St George’s Chapel West Steps. A Guard of Honour and Band from The Rifles receives the coffin at the foot of the steps. The National Anthem is played as the coffin enters Horseshoe Cloister. A bearing party of Royal Marines carries the coffin up the steps.

3pm. Pause for a minute’s silence. The Archbishop of Canterbury and Dean of Windsor receive the coffin. Only members of the Royal Family and Philip’s private secretary, Archie Miller-Bakewell, enter the chapel.

The Service begins with the coffin carried to the catafalque in the Quire.

Philip’s body is believed to have been moved here. The chapel was created by Queen Victoria in honour of her husband, Albert, in 1875.

Portraits of the couple’s nine children were included among decorations of gilding, marble, mosaics, precious stones and coloured glass.

It is widely believed the Queen wishes to be buried alongside Philip here. The bodies of her parents, George VI and the Queen Mother, as well as the ashes of her sister, Princess Margaret, are interred here. 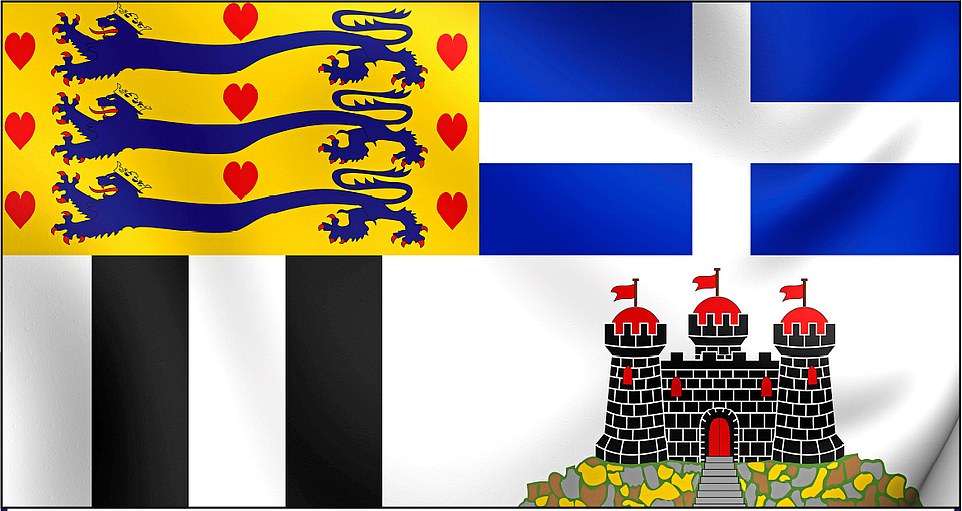 Prince Philip’s Standard knits together his rich lineage and personal history. The flag is quartered into Denmark, Greece, Mountbatten and Edinburgh

Prince Philip’s Standard knits together his rich lineage and personal history. The flag is quartered into Denmark, Greece, Mountbatten and Edinburgh – representing the two royal families he descends from, as well as his surname and title.

Born into the Greek and Danish royal families, he renounced his right to either throne when he became a British subject before his marriage to Princess Elizabeth at Westminster Abbey in 1947.

Denmark is represented on the standard by three blue lions passant and nine red hearts on a yellow field, while Greece consists of a white cross on a blue field.

Before his wedding, he adopted his mother’s surname of Mountbatten, represented by five vertical stripes. After his marriage, he was designated a Royal highness and became the Duke of Edinburgh. The city is represented by a three-towered castle.

Buried in his Naval finery

Philip (pictured left on his honeymoon in Malta in 1947 and right at Sandhurst in 2006), is expected to be buried in his ceremonial naval uniform.

Philip is expected to be buried in his ceremonial naval uniform.

His coffin will be draped with his personal standard, and decorated with a wreath of flowers and his naval cap and sword.