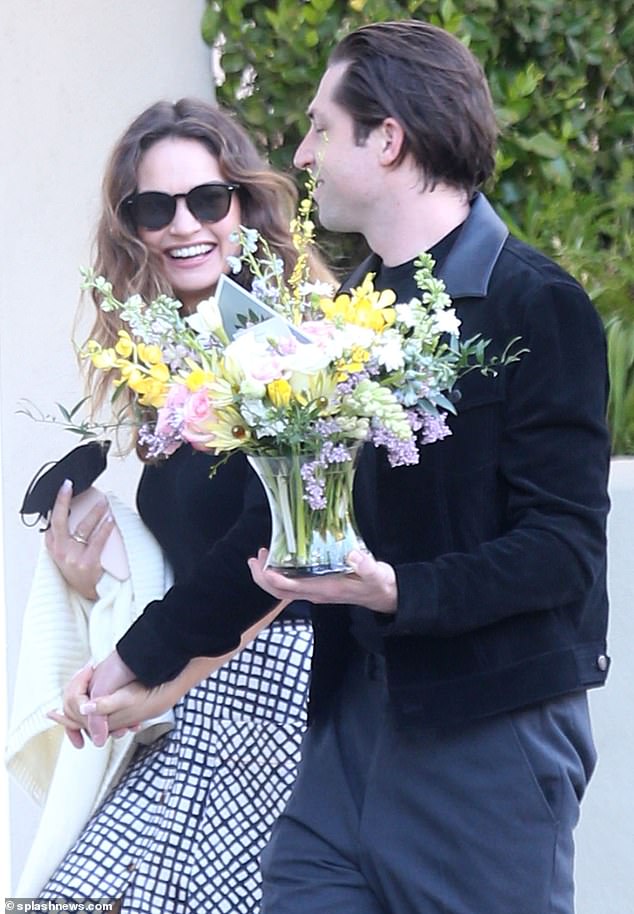 Lily James’ new boyfriend has revealed that he appeared in The Wedding Singer as a child.

And speaking with The Mirror, the Queens of the Stone Age musician detailed how he was gifted a guitar by the movie’s leading man after jamming in a trailer.

Cool connections: Lily James’s new boyfriend Michael Shuman has revealed that he appeared in The Wedding Singer as a child and was was gifted a guitar from Adam Sandler (the couple are pictured in Los Angeles in April)

Michael explained that he managed to get a role in the Hollywood flick because of his dad, Ira Shuman, who is a former executive production manager for Walt Disney.

He explained: ‘My dad’s in the film business so I was just in the right place at the right time.

‘Once, my dad took me to his [Adam Sandler’s] trailer and he was just jamming playing guitar… and he was like, “Come on in, we can play”.’

The musician said that they played The Beatles song Do You Want To Know A Secret, as that was all he could play at the time. 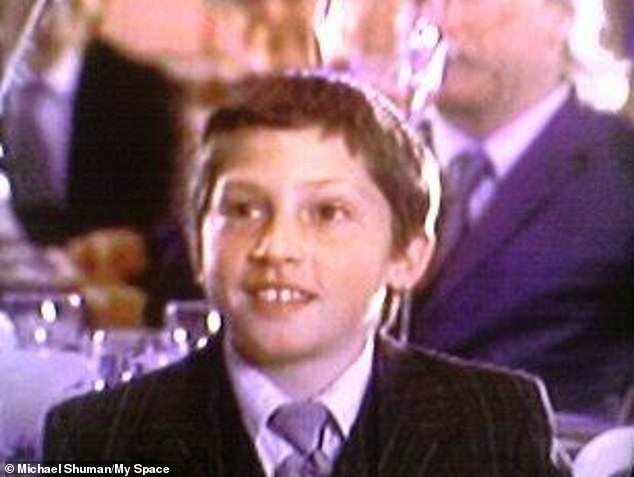 Michael continued: ‘Then the next day, I went to school and I came home and Adam had given me a guitar and an amp, which was so sweet. I still have the guitar.’

The musician’s father Ira has also worked on films such as Strange Days as well as The Wedding Singer.

Elsewhere in his interview, Michael recalled the ‘scary’ experience of being handcuffed for three hours while trying to cross into Canada.

He explained how some vitamins he was carrying tested as having ‘traces of amphetamines’ but after a retest everything was fine and he was able to leave.

Lily and Michael have gone from strength to strength since being linked in February. 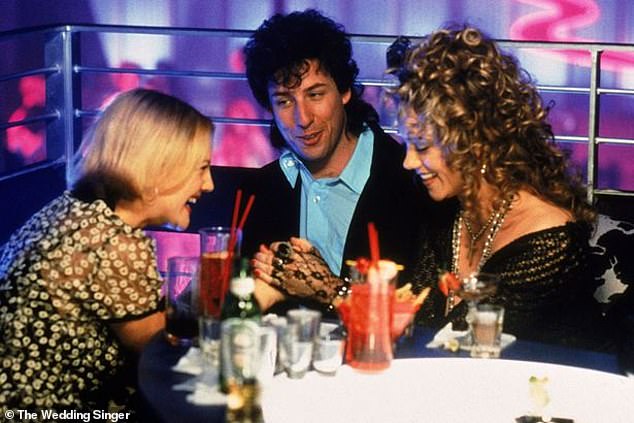 Sweet: Michael added that he ended up jamming to The Beatles song Do You Want To Know A Secret with Adam (pictured in the film) in his trailer inbetween takes on the movie

The partnership initially came as a shock to fans of the pair, as Lily is known for her family friendly roles in Downton Abbey, Cinderella and Mammia Mia.

Meanwhile, Michael is a member of Queens Of The Stone Age, the band notorious for on-stage nudity and claims of drug and alcohol abuse.

The couple were first linked this year after they were spotted sharing a kiss outside a boutique hotel in Suffolk while she filmed What’s Love Got To Do With It?

The American star was said to be staying at the hotel where Lily was quarantining with cast and crew for the film.

An eyewitness told the Daily Mail at the time: ‘Lily’s driver turned up just after 9am, then she and Michael emerged from the hotel together a few minutes later. They were laughing and joking and looked very happy together.’ 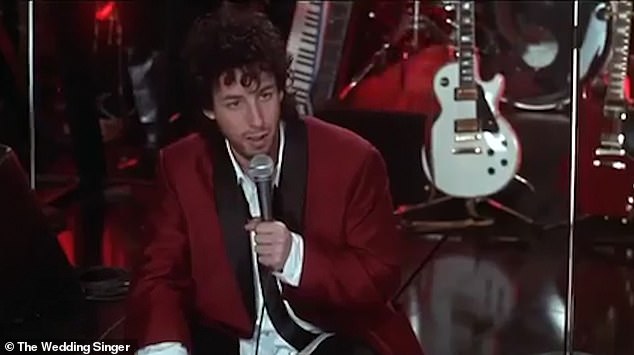 Generous: The actor (pictured in The Wedding Singer) also gave Michael a guitar and amp,  which the musician said ‘was so sweet’

While just last month, the American rocker was thought to be staying with her at her new £3million home in north London while she was filming in the UK.

Now things seem to have taken a step up, with Lily visiting Michael’s parents Ira and Janet Shuman, in Los Angeles at the end of March.

Lily has kept a low-profile since she became the subject of worldwide scrutiny when images emerged showing her and actor Dominic West enjoying an al fresco lunch with their mutual agent, Angharad Wood, in October.

They enjoyed a two-day vacation in Italy where they were seen riding on a scooter through Rome, and Dominic appeared to at one point lean over and kiss Lily’s neck.

A source told MailOnline the thespians spent two nights in a suite at the top Hotel De La Ville with a panoramic view over the city and just at two minutes walk from the Spanish steps.

Just days later, Dominic defiantly defended his marriage to wife Catherine FitzGerald, with the pair staging a photo opportunity outside their Wiltshire home and telling reporters: ‘Our marriage is strong and we’re very much still together.’

TV and film star Lily previously dated The Crown star Matt Smith, 38, on and off for five years, with the relationship said to be over just weeks before she was pictured with Dominic.

In July, she was pictured heading to Chris Evans’ London hotel after partying into the early hours at private members’ venue, Mark’s Club in Mayfair. Just days later, the duo put on a cosy display as they enjoyed an ice cream together in a London park.

Lily has raised eyebrows in the past by forging close friendships with her co-stars in recent productions – Armie Hammer in Rebecca and Dominic in BBC drama The Pursuit Of Love. 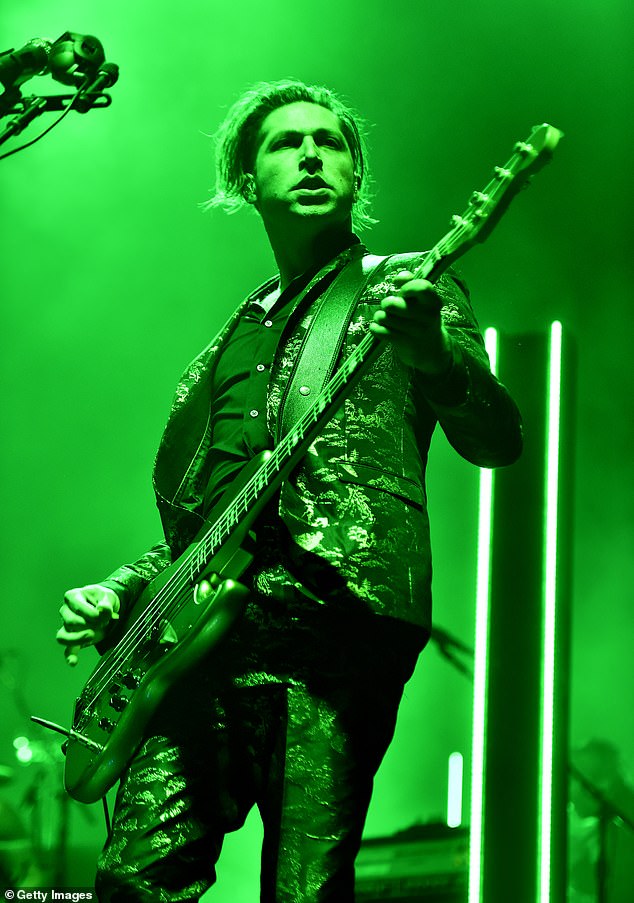 Musician: Michael is better known for being in rock band Queens of the Stone Age (pictured performing in California in 2018)