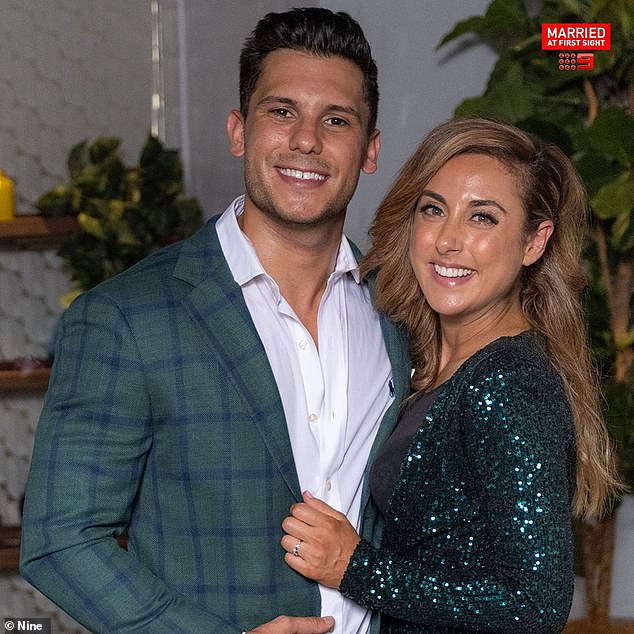 They’ve had one of the strongest relationships on this year’s season of Married At First Sight.

And Johnny Balbuziente and Kerry Knight  finally got their happily ever after during Monday’s episode.

Standing in front of each other for their final commitment ceremony, an emotional Johnny, 30, confessed his love for Kerry.

‘I began this journey not knowing if I could ever be in a serious relationship again after a long period of dark times,’ he began.

‘My heart had been ripped out of my chest and my world was turned on its head. But I worked hard to get back on track and that I did.’

He confessed that although he was initially hesitant going into the experiment, Kerry helped bring down his walls.

‘I was happy, but not truly happy. I was avoiding finding love because I was scared of the heartache. I threw myself into this crazy experiment and this was one of the biggest leaps of faith in my life.’

‘And I can safely say I have found so much more out of this than I could have ever hoped for. Kerry you literally took my breath away. Our eyes met and yours sparkled.’

‘You are such a great listener and I could talk underwater. I’m frantic, you’re calm. I’m often late, and you’re always on time. I just really think we make a perfect double act.’

Johnny also confessed that he had concerns about their relationship but was willing to make it work.

‘I’m concerned that you’re not as open with your feelings as I am. I question why it feels you are holding back from me. Maybe you aren’t feeling this as much as I am.’

‘But Kerry, I miss absolutely everything about you and this relationship… I have never met somebody like you. I’m falling in love with you,’ he said.

After confessing his feelings, Kerry told Johnny: ‘I promise I will stand by your side, hold your hand and give you all the time you need while you heal.’

‘Johnny you have my heart. I’m absolutely falling in love with you. I’m wholeheartedly recommitting my vows today and promising to give our future together a red-hot crack.’