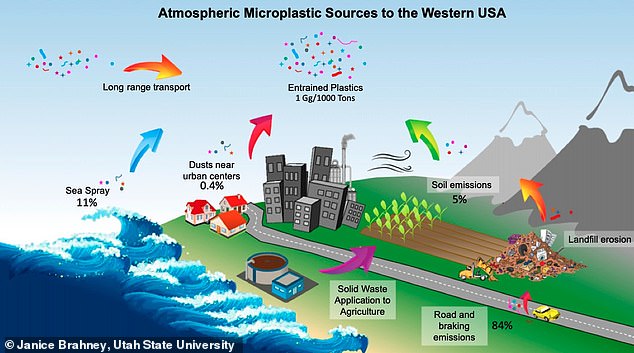 Roads and the vehicles using them are responsible for 84 per cent of microplastics found in the atmosphere, according to the results of a new study.

Researchers from Utah State University examined different sources of atmospheric microplastic pollution found in the western US over a 14 month period.

These microscopic pieces of plastic pollution are so pervasive they affect how plants grow, waft through the air we breath, infiltrate the oceans, are found in the guts of insects in Antarctica and even in the human bloodstream, study authors warned.

The US team found that 84 per cent of microplastics in the atmosphere came from road dust, mainly tires, 11 per cent from sea spray and five per cent from agricultural soil.

Study authors found the majority of atmospheric microplastics came from roads, with sea spray (as bottles and packaging breaks down) coming in second 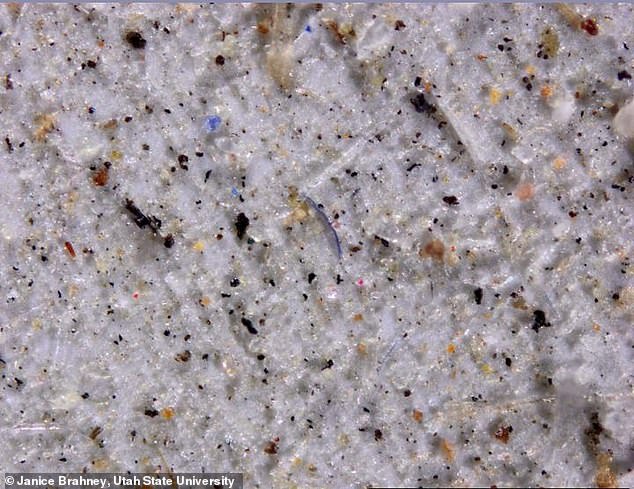 Tonnes of plastic waste fails to get recycled and dealt with correctly.

They end up in waterways, the soil, oceans and even the atmosphere, breaking down over time from larger pieces of plastic waste.

They can also come from tire rubber as cars drive on roadways, and micro beads used in washing and fabrics.

Plastics don’t break down for thousands of years, instead forming smaller and smaller particles that enter the atmosphere and climate system.

Scientists warn microplastics are so small they could penetrate organs.

Creatures of all shapes and sizes have been found to have consumed the plastics, whether directly or indirectly.

Janice Brahney, Natalie Mahowald, and colleagues examined major sources of atmospheric microplastics as well as the locations where it is concentrated.

They found microplastics from the land on the surface of the ocean and plastic from the ocean on land – suggesting it spreads through the atmosphere.

Overall, the greatest concentration of atmospheric microplastics was estimated to be over the ocean.

Depending on size, microplastics remained in the atmosphere from approximately one hour to 6.5 days, the latter long enough to take them to another continent.

Even the most remote continent on the Earth, Antarctica, received microplastic pollution from the atmosphere, despite having zero microplastic emissions.

The findings suggest that even after atmospheric microplastics settle on land or in water, they may reenter the atmosphere.

Understanding how microplastics move through global systems is essential to fixing the problem, said Brahney.

‘Plastics enter the atmosphere … not directly from garbage cans or landfills as you might expect … but from old, broken-down waste that makes its way into large-scale atmospheric patterns,’ the team explained.

Roads are a big source of atmospheric plastics, where vehicle tires churn and launch skyward the tiny pieces through strong vehicle-created turbulence.

Ocean waves, too, are full of insoluble plastic particles that used to be food wrappers, soda bottles, and plastic bags.

These ‘legacy plastic’ particles bob to the top layer of water and are churned by waves and wind, and catapulted into the air.

Dust and agriculture sources for airborne plastics factor more prominently in northern Africa and Eurasia, while road-produced sources had a big impact in heavily populated regions the world over. 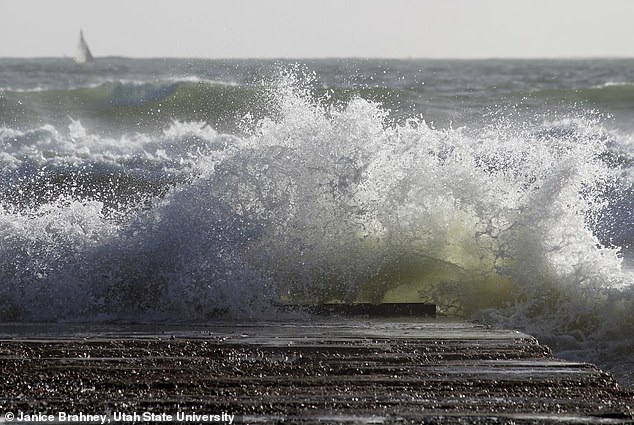 These microscopic pieces of plastic pollution are so pervasive they affect how plants grow, waft through the air we breath, infiltrate the oceans, are found in the guts of insects in Antarctica and even in the human bloodstream, study authors warned 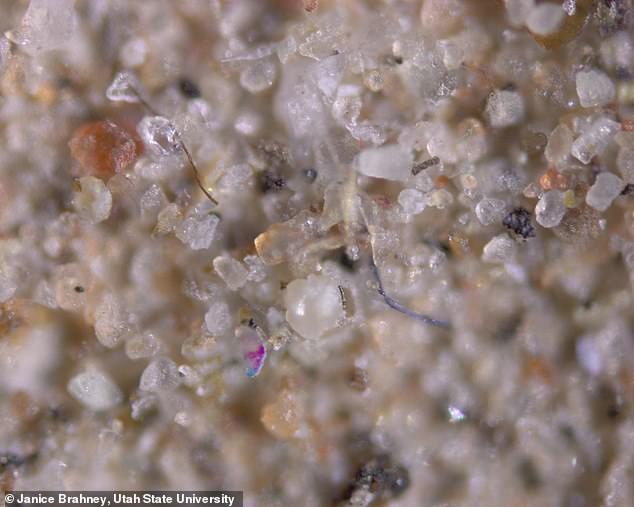 The US team found that 84 per cent of microplastics in the atmosphere came from road dust, mainly tires, 11% from sea spray and five per cent from agricultural soil

This study is important, said Brahney, but it is just the beginning.

‘Much more work is needed on this pressing problem to understand how different environments might influence the process – wet climates versus dry ones, mountainous regions versus flatlands,’ she said.

‘The world hasn’t slowed its production or use of plastic, so these questions become more pressing every passing year.’

The findings have been published in the journal Proceedings of the National Academy of Sciences.

URBAN FLOODING IS FLUSHING MICROPLASTICS INTO THE OCEANS FASTER THAN THOUGHT

Urban flooding is causing microplastics to be flushed into our oceans even faster than thought, according to scientists looking at pollution in rivers.

Waterways in Greater Manchester are now so heavily contaminated by microplastics that particles are found in every sample – including even the smallest streams.

This pollution is a major contributor to contamination in the oceans, researchers found as part of the first detailed catchment-wide study anywhere in the world.

This debris – including microbeads and microfibres – are toxic to ecosystems.

It has long been known they enter river systems from multiple sources including industrial effluent, storm water drains and domestic wastewater.

However, although around 90 per cent of microplastic contamination in the oceans is thought to originate from land, not much is known about their movements.

Most rivers examined had around 517,000 plastic particles per square metre, according to researchers from the University of Manchester who carried out the detailed study.

Following a period of major flooding, the researchers re-sampled at all of the sites.

They found levels of contamination had fallen at the majority of them, and the flooding had removed about 70 per cent of the microplastics stored on the river beds.

This demonstrates that flood events can transfer large quantities of microplastics from urban river to the oceans.