Boris Johnson today said there are questions that need to be ‘satisfied’ over the David Cameron Greensill lobbying row as he insisted an independent probe will be given ‘carte blanche’ to ask anybody anything.

The Prime Minister said he wants a review led by Nigel Boardman to be ‘done quickly’, with the legal expert to be given ‘maximum possible access so we can all understand exactly what has happened’.

However, Downing Street admitted at lunchtime that the probe will not be underpinned with legal powers and it will only be able to make recommendations.

Mr Cameron has welcomed the review and said he is prepared to give evidence to it.

Downing Street yesterday announced the Cabinet Office had commissioned an inquiry into ‘the development and use of supply chain finance and associated activities in Government, and the role Greensill played in those’.

The review will look at how contracts were secured and ‘how business representatives engaged with Government’ amid a furore over text messages sent between Mr Cameron and Chancellor Rishi Sunak.

A spokesman for Mr Cameron said: ‘David Cameron welcomes the inquiry and will be glad to take part.’

It came as Labour accused Mr Sunak of ‘running scared’ after he failed to attend the House of Commons to answer an urgent question on the Greensill row. 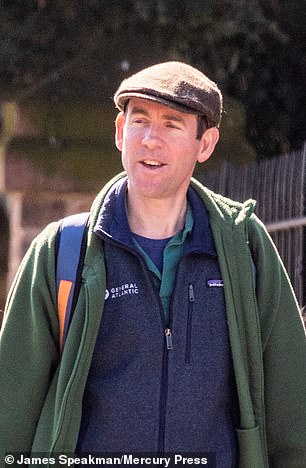 Downing Street yesterday announced the senior lawyer, Nigel Boardman, had been commissioned to carry out a review into how Greensill Capital – founded by Australian financier Lex Greensill (pictured right) – was able to secure Government contracts 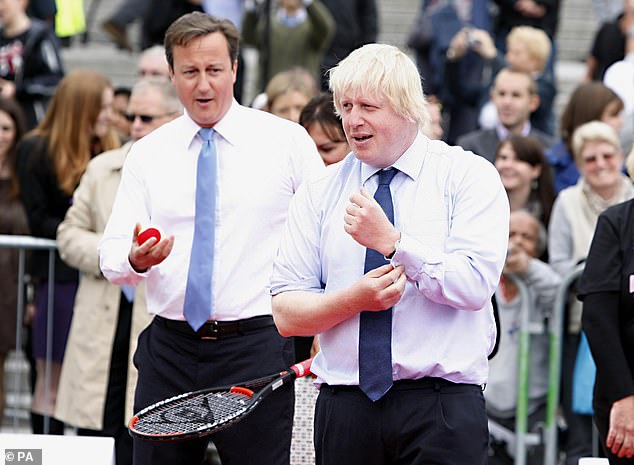 The former Prime Minister, 54, said he ‘will be glad’ to answer questions about his work for the now collapsed finance firm Greensill Capital after Mr Johnson ordered a probe (pictured: Mr Cameron and Mr Johnson together in 2011) 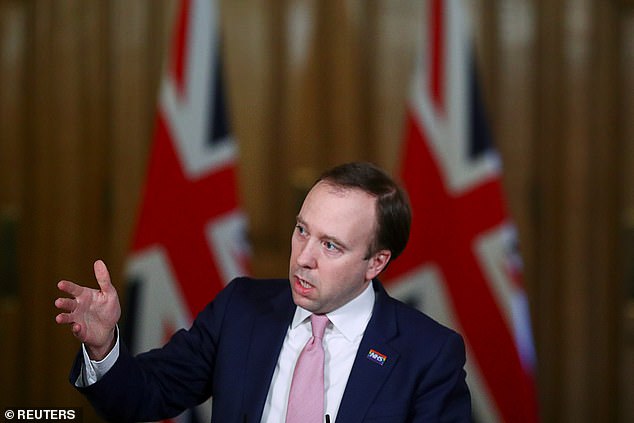 Mr Cameron is now facing scrutiny over his work for American healthcare firm Illumina after it emerged the company secured a £123million Department of Health contract in 2019. Health Secretary Matt Hancock is pictured in March this year

Friends or ‘frenemies’? Boris Johnson and Davis Cameron’s rivalry dates back to Eton

The announcement of an official investigation into the Greensill lobbying row immediately prompted claims from Tory MPs that Boris Johnson wanted to settle his old rivalry with David Cameron.

Competition between the pair started during their time together at Eton College, when both decided they wanted to become prime minister.

Their political paths have been linked ever since, as they first headed to Oxford University where they were both in the notorious Bullingdon Club, before then heading to Westminster.

Both men were elected as MPs for the first time in 2001 but it was Mr Cameron who achieved his dream before Mr Johnson as he first became Tory leader in 2005 and then PM in 2010.

Mr Johnson was made to wait as he took a different path, stepping down as an MP in 2008 to serve two terms as Mayor of London before a return to the Commons in 2015.

The rivalry soured in 2016 at the Brexit referendum when Mr Johnson backed Leave despite Mr Cameron seeking his backing for the Remain campaign.

The decision left Mr Cameron furious at Mr Johnson, as he said in the run up to June 23: ‘I’m still friends with Boris, just perhaps not such good friends.’

Mr Johnson was asked directly today whether the inquiry is an attempt to ‘rough up an old rival’ as some Tory MPs have suggested.

Mr Johnson replied: ‘I think people have just got questions that they need to satisfy themselves, including me, about how this supply chain finance stuff is meant to work.’

Mr Johnson told Sky News this morning: ‘I have asked Nigel Boardman to have a look at this whole issue of supply chain finance and given him pretty much carte blanche to ask anybody whatever he needs to find out.

‘I would like it to be done quickly but I want him to have the maximum possible access so we can all understand exactly what has happened and that will of course be presented to Parliament in due course.’

Critics have suggested the review is not fully independent because Mr Boardman is a non-executive board member of the Department for Business, Energy and Industrial Strategy who has previously conducted a review of Cabinet Office procurement processes.

But Mr Johnson said: ‘I have got every confidence in Nigel Boardman. I think he will do an outstanding job.

‘He has done a very good job on PPE that I have been reading and I think that we need to understand exactly what has been going on with this supply chain finance question and we will make sure that everybody gives him their time and he can set out his thoughts and set out his arguments.’

Mr Johnson would not be drawn on his assessment of Mr Cameron’s behaviour as he said: ‘That is a matter for Nigel Boardman.’

The announcement of an official investigation prompted Tory MPs to claim Mr Johnson wanted to settle his old rivalry with Mr Cameron which dates back to their time at Eton College and Oxford University.

One senior Conservative MP told the Financial Times that ‘Boris is getting his vengeance on Dave’ while a former Tory minister claimed the PM ‘will love nothing more than throwing Dave under the bus’.

Asked whether the inquiry was an attempt to ‘rough up an old rival’, Mr Johnson replied: ‘I think people have just got questions that they need to satisfy themselves, including me, about how this supply chain finance stuff is meant to work.

‘I don’t think it is going on at present anywhere in government but we need to understand exactly what the intention was, how it came about and that is what Nigel Boardman is going to do.’

Downing Street admitted at lunchtime that the review will not have any legal powers.

The Prime Minister’s Official Spokesman said: ‘No, it won’t have legal powers, but the review will have access to all the necessary information required and engage with those involved at the time.’

Asked if the review is going to be able to recommend changes to lobbying rules, the spokesman said: ‘They will be able to make recommendations but I’m not going to set out for an independent review of what he should be looking at.’

It came as Mr Cameron faced new questions over his work for another company he advises, American healthcare firm Illumina, after it emerged the business secured a £123million Department of Health contract in 2019.

Mr Cameron is a paid adviser for Illumina and in his statement released on Sunday in response to the Greensill row he listed the firm as one of his ‘commercial interests’.

The Times said the contract was awarded to Illumina a week after Mr Cameron appeared with Health Secretary Matt Hancock at a genomics conference in September 2019.

Mr Cameron has said his role with the firm was purely to promote the benefits of genomic sequencing technology.

The 2019 contract was awarded to Illumina by Genomics England which is a Department of Health body set up during the years of the Coalition Government when Mr Cameron was prime minister.

An initial contract was awarded by Genomics England to Illumina back in 2014. Mr Cameron reportedly joined Illumina as a consultant in 2017.

Illumina said: ‘Illumina always follows the correct and necessary process in its negotiations with customers.’

The Department of Health said the 2019 contract followed up on the original contract agreed in 2014 and it had been ‘directly awarded because Illumina was the only company with the technical capability to deliver the work’.

The Department of Health and Social Care said: ‘The Health Secretary is a strong supporter of the UK’s world leading genomic sequencing capability.

‘This contract was awarded in the correct way following extensive due diligence and through the proper transparency notice process.’

It came as Labour launched a fresh attempt to press ministers over Mr Cameron’s lobbying activities on behalf of the collapsed financial firm Greensill Capital.

Shadow chancellor Anneliese Dodds was granted an urgent question in the Commons this afternoon as she sought answers from Mr Sunak on the ‘process by which Greensill Capital was approved as a lender for the Coronavirus Large Business Interruption Loan Scheme (CBILS)’.

But Mr Sunak did not attend the Commons and Small Business Minister Paul Scully answered on behalf of the Government.

Mr Sunak’s absence prompted Ms Dodds to accuse him of being ‘frit’ and of ‘running scared’ of scrutiny.

Mr Scully said Mr Sunak had already written to Ms Dodds last week with a ‘comprehensive response’ to the questions she had raised.

He also said the CBILS scheme ‘is administered by the British Business Bank’ which means responsibility for the delivery of the scheme sits with the Department for Business, Energy and Industrial Strategy rather than Mr Sunak and the Treasury. 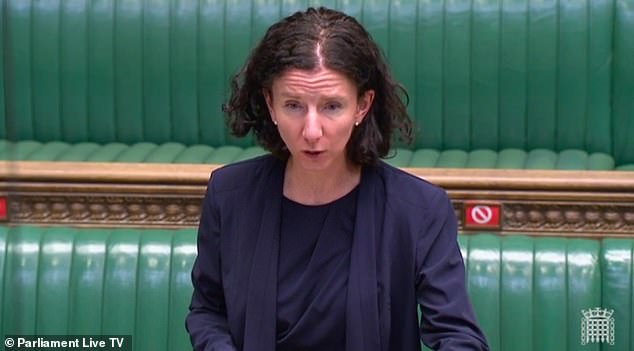 Shadow chancellor Anneliese Dodds accused Mr Sunak of ‘running scared’ of scrutiny after he failed to answer an urgent question on the row in the House of Commons, with Small Business Minister Paul Scully responding for the Government

It follows a series of reports on Mr Cameron’s lobbying on behalf of the firm – including sending text messages to Mr Sunak’s personal phone number.

In response to one, the Chancellor said he had ‘pushed’ officials to consider proposals which could have helped Greensill.

It was also reported that Mr Cameron arranged a ‘private drink’ between Mr Hancock and Mr Greensill to discuss a payment scheme which was later rolled out in the NHS.

Mr Cameron finally broke his silence on the row at the weekend with a statement in which he insisted he had not broken any rules, but accepted there were ‘lessons to be learned’.

As a former prime minister, he said that any contacts with government should be through ‘only the most formal of channels, so there can be no room for misinterpretation’.