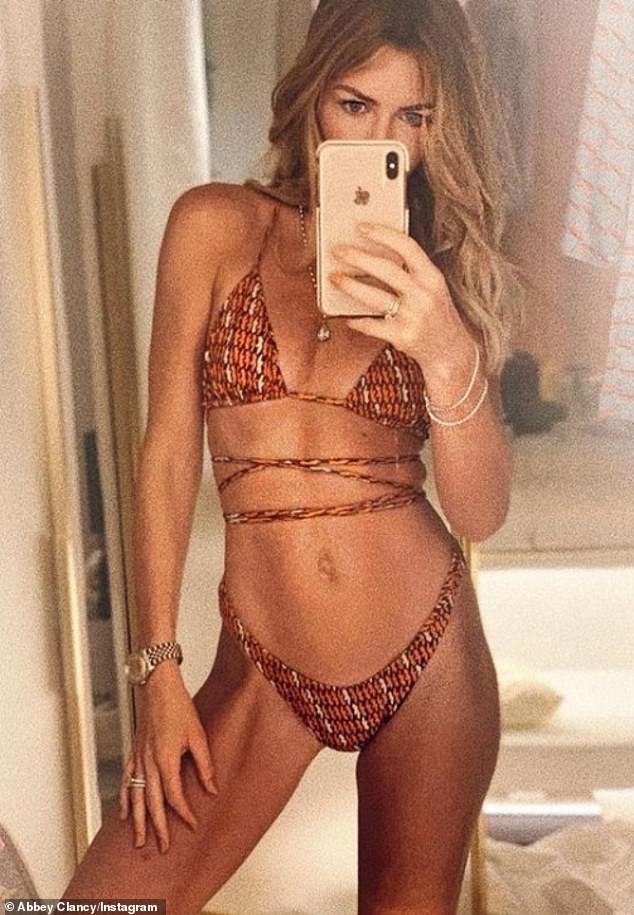 Abbey Clancy has undergone a £380 skin tightening treatment on her washboard abs after claiming having four children ‘overstretched’ her stomach.

The model, 35, said she ‘really needed’ the bespoke procedure because it’s ‘something the gym can’t do’ and while she doesn’t have ‘a lot of fat there’ she still needs ‘help’ tackling the problem.

On Tuesday, Abbey, who shares Sophia, 10, Liberty, five, Johnny, four, and Jack, one, with footballer husband Peter Crouch, 40, was filmed having the celebrity treatment at a London clinic.

‘I just need a bit of help’: Abbey Clancy has undergone a £380 skin tightening treatment on her washboard abs after saying having four children ‘overstretched’ her stomach (pictured August 2020)

Abbey said while having the treatment: ‘See, this is what I think I really need because you know I don’t feel like there’s a lot of fat there but having had four kids the skin is so overstretched, I just need a bit of help, something the gym can’t do.’

The clip was shared to the Instagram profile of celebrity skincare expert Shane Cooper, who explained the science behind Abbey’s procedure.

The video prompted interest from BAFTAs host Edith Bowman, 47, who commented: ‘This is what I’m talking about. Book me in ASAP.’ 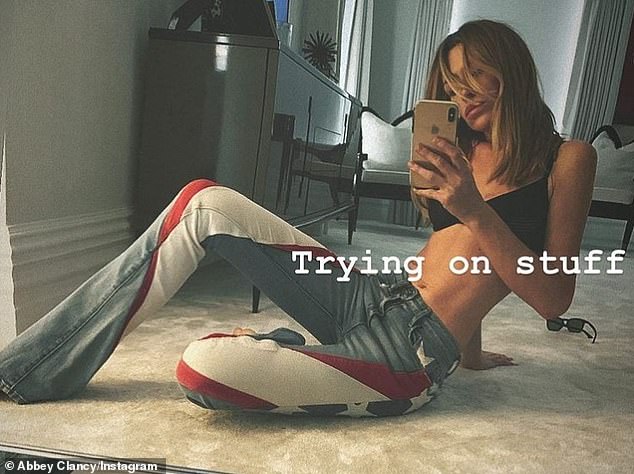 ‘Something the gym can’t do’: Abbey said she ‘really needed’ the bespoke procedure because while she doesn’t have ‘a lot of fat there’ she still needs ‘help’ tackling the problem

And she’s not alone as a string of celebrities have visited Shane since beauty salons reopened on Monday, with TV presenter Maya Jama, 26, stopping by for a ‘collagen boasting and skin contouring’ facial this week.

Former Strictly winner Abbey gave birth to youngest son Jack in June 2019 and said months after welcoming her fourth baby that ‘genes’ played a huge part in her ability to ‘bounce back’ from pregnancy.

She explained: ‘Everyone in my family is slim and tall. My mother bounced back after kids, so I think my genes are a huge part of it. 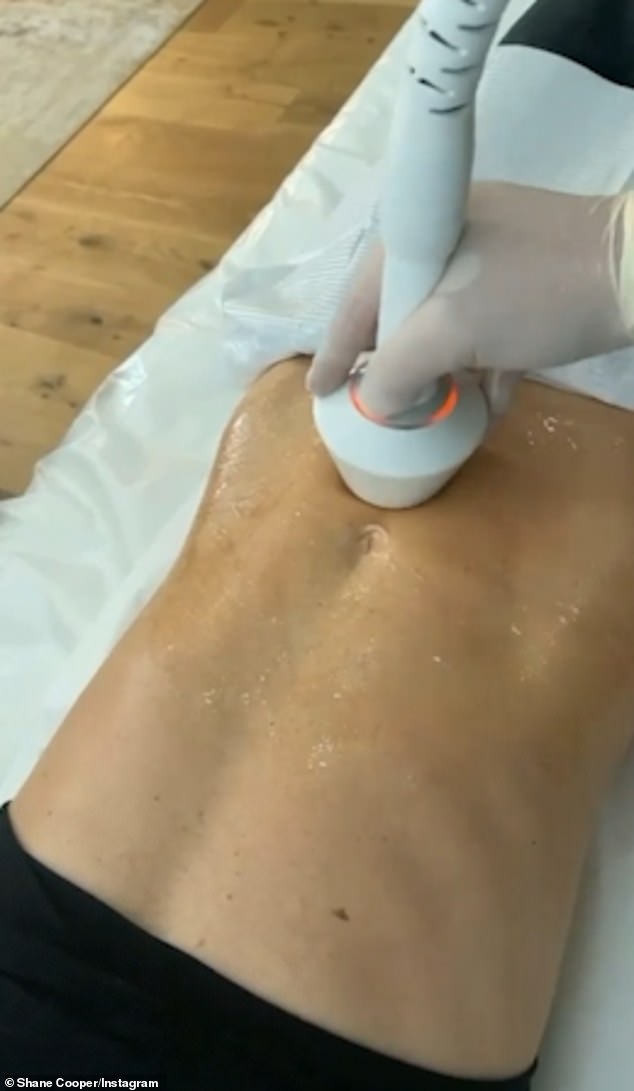 Self-care: On Tuesday, Abbey was filmed having the celebrity treatment at Shane Cooper’s London clinic with her ‘overstretched’ stomach on show 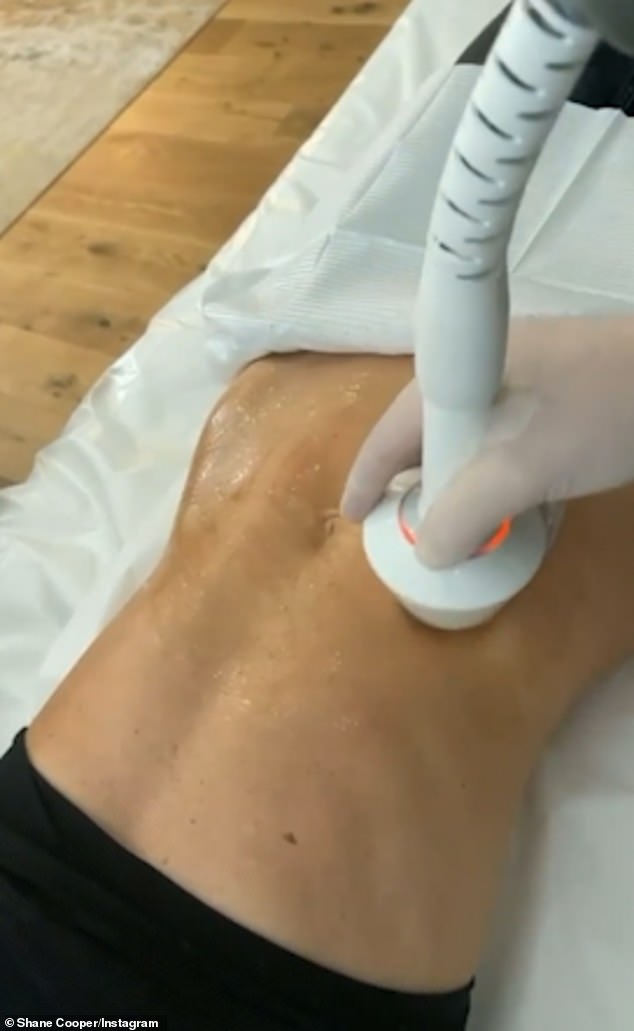 ‘This is what I really need’: In order to maintain her model physique, Abbey regularly visits Shane, who’s previously treated the star’s face, neck and body

‘I generally eat what I want to in moderation. I don’t really struggle with my weight too much, so I don’t have to be focused on what not to eat.

‘But I like to eat well because it gives me energy and I feel less tired – and it’s good for your skin and hair.’

In November 2019, four months after giving birth to Jack, Abbey explained she upped her ‘core’ exercises to improve her overall strength.

She said: ‘I’ve been doing more core work for fitness. After having my third baby, I did feel quite weak and tired. Doing your pelvic floor exercises and working on your core, you just feel stronger. 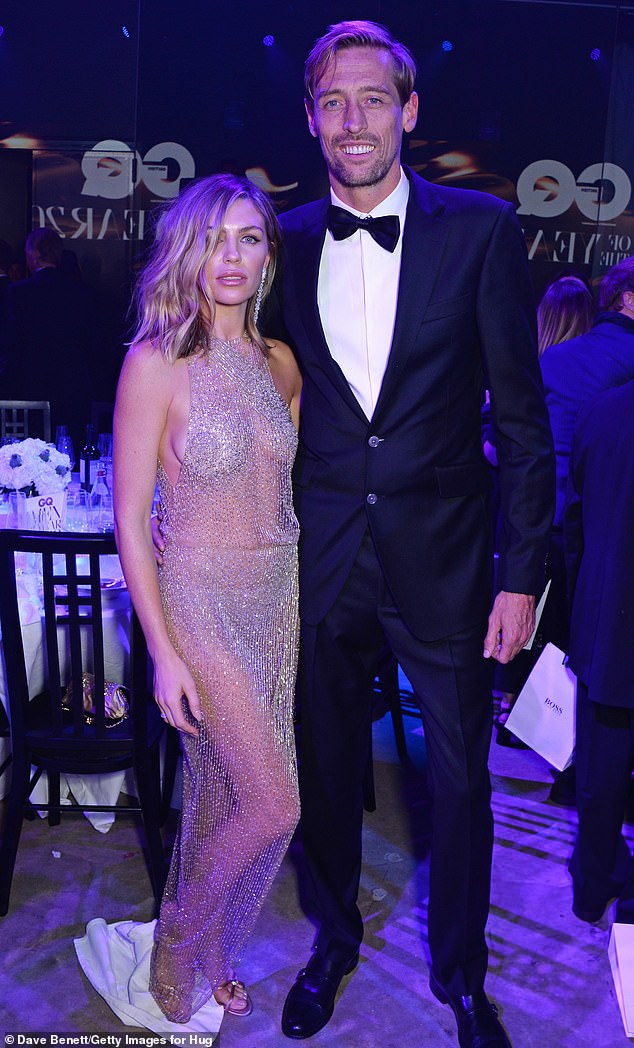 ‘My nose was wonky’: Abbey and Peter share four children, and while the footballer has made adjustments to his appearance, he made the refinements after suffering from sporting injuries

Abbey’s statuesque figure has garnered her a successful modelling career after she came runner-up of Britain’s Next Top Model in 2006 and later starred on the cover of Sports Illustrated, British Elle, Esquire and Marie-Claire, to name a few.

Her children are already following in her model footsteps after Sophia, Liberty and Johnny starred in their first F&F kidswear campaign for Tesco last month.

Abbey’s husband Peter has undergone surgery in the past but all on the back of injuries sustained playing football.

Following his nose job, Peter admitted: ‘My nose was a bit wonky at Liverpool and I had it put right after a knock – and my teeth weren’t ideal until I had them knocked out and repaired – so I’m slowly improving as I get older.’ 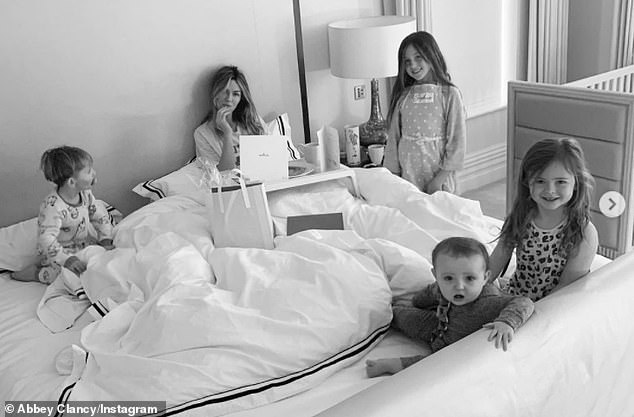 Family: Abbey, pictured on Mother’s Day with children Sophia, 10, Liberty, five, Johnny, four, and Jack, one, claimed her stomach lost shape after having her brood