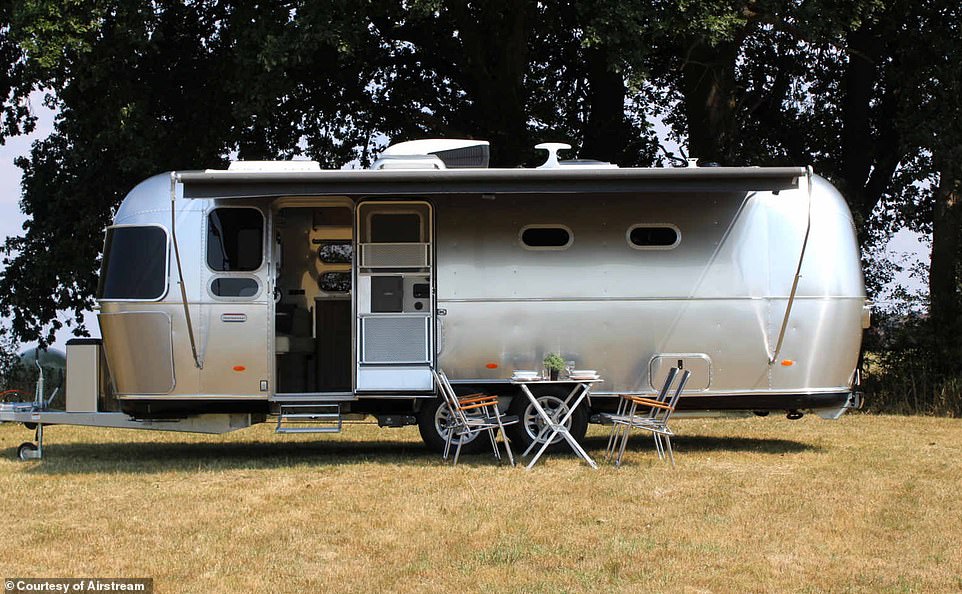 Forget cardboard-thin mattresses, icy draughts, damp and getting a nose bleed if you turn around too quickly in the cramped kitchen.

The caravan is enjoying a revival, with sales in March alone up by some 125 per cent up on the same month last year.

And a new generation of luxury caravans for the British market claims to offer all the comfort and benefits of luxury hotel suites. 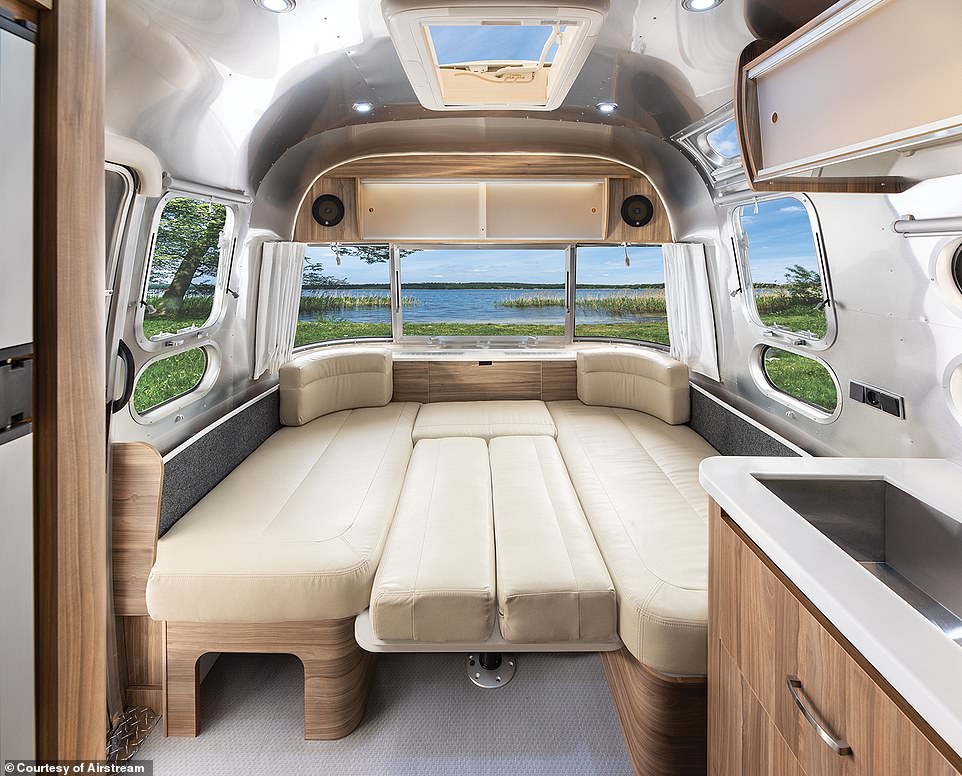 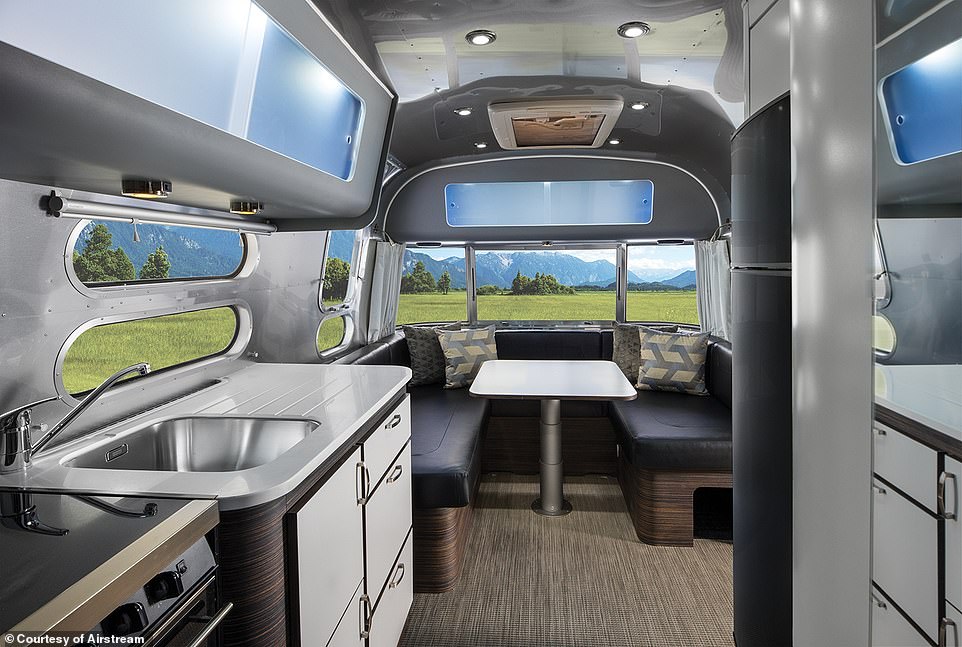 Combining tradition, style and luxury, the new Airstream starts from £105,000

The US company Airstream has launched a new version of its ‘silver bullet’ caravan for the British market, combining tradition, style and luxury with a typical price tag of over £100,000.

For luxury at a more modest price tag of £40,000, there is the all-new Lusso from British manufacturer Coachman.

There are also mega motorhomes from German manufacturers, such as the Morelo Grand Empire, which has a starting price of £550,000 and offers a home on wheels plus an onboard garage big enough to carry a Mini Cooper S. 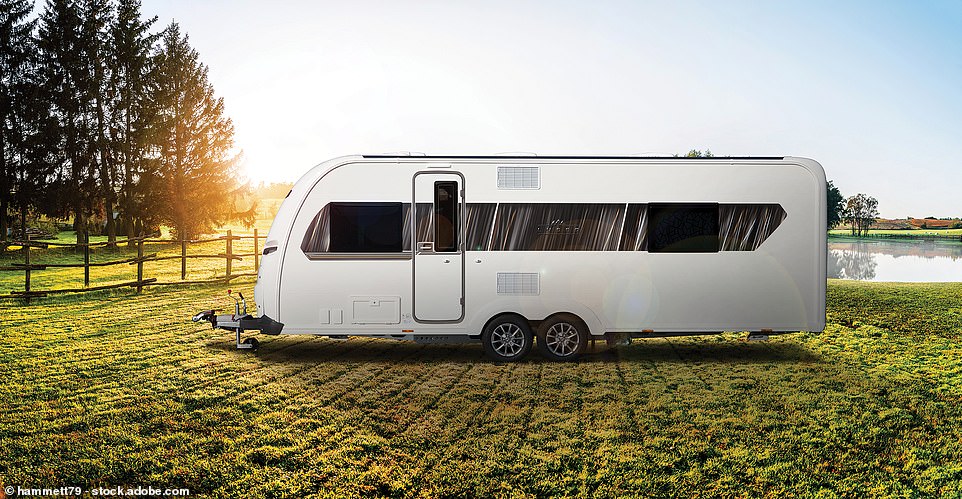 For luxury at a more modest price tag of £40,000, there is the all-new Lusso from British manufacturer Coachman 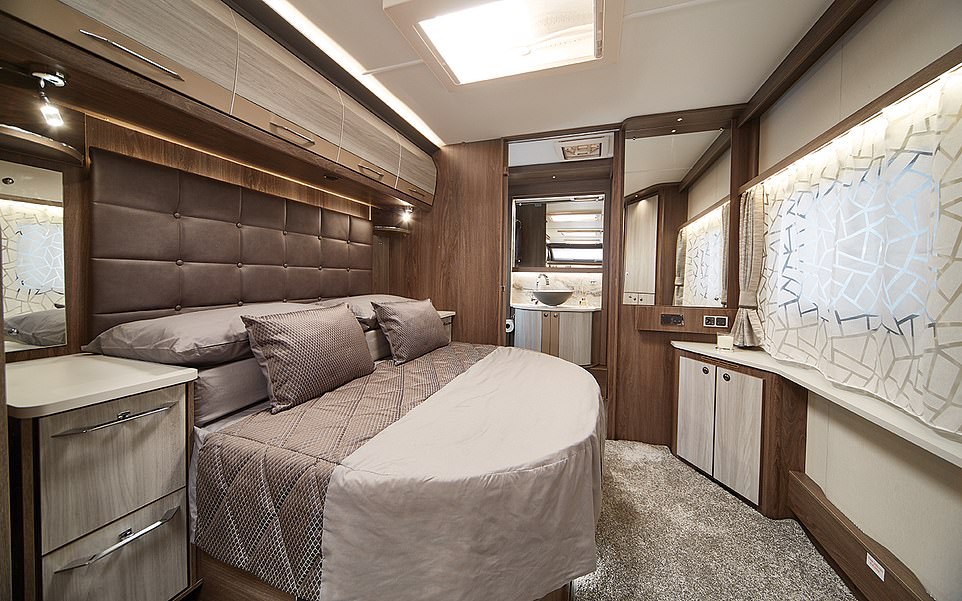 The Lusso, made by Hull-based Coachman, was launched in November 2020 but the company says it is already ‘virtually sold out for this season’ 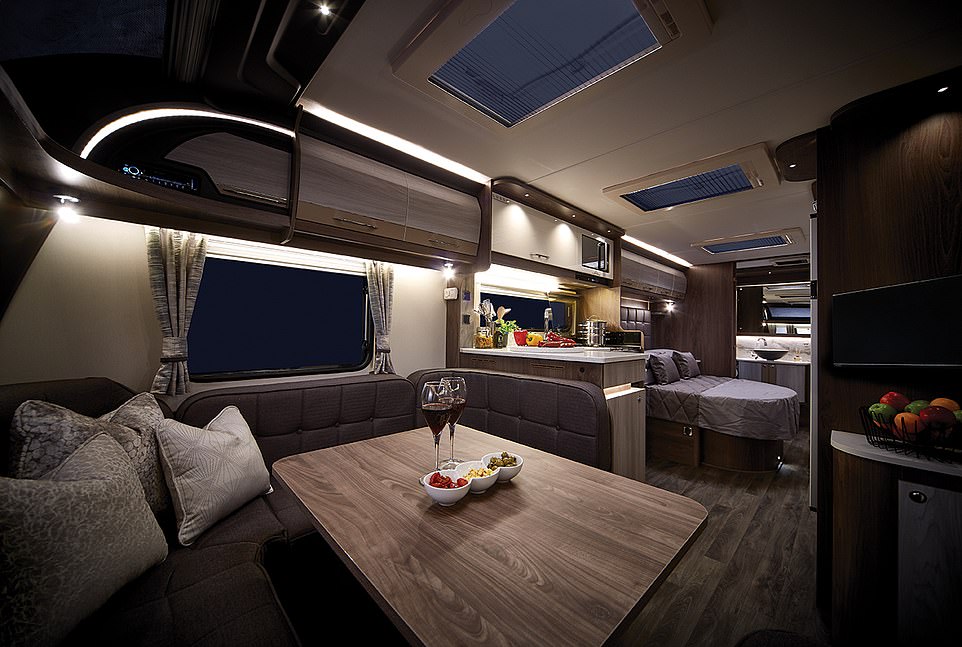 Standout features of the Lusso include a fully-equipped kitchen with a fan oven, hob and microwave, and a sound system installed in the lounge and bedroom areas. LED lighting also helps create a cosy ambience

The UK importer is in talks with several interested parties to provide right-hand drive versions to clients in this country.

‘I defy anyone to step inside a new caravan and not be impressed when they see a full-sized island double bed with a luxury en-suite washroom, a kitchen with every facility like wine coolers and coffee machines, and lounges with satellite TVs, USB points, radiant heating and huge skylights.

‘Today’s caravans are more akin to luxury hotel suites and it is with this attractive image now in people’s minds that is driving the current demand.’

Just over 2,500 caravans have been snapped up during the first three months of 2021, which is remarkable given that most dealers have been closed.

The German-made Morelo Grand Empire is built on the large-format truck chassis from a Mercedes-Benz. Along with a home on wheels, it offers an onboard garage large enough to house a Mini Cooper 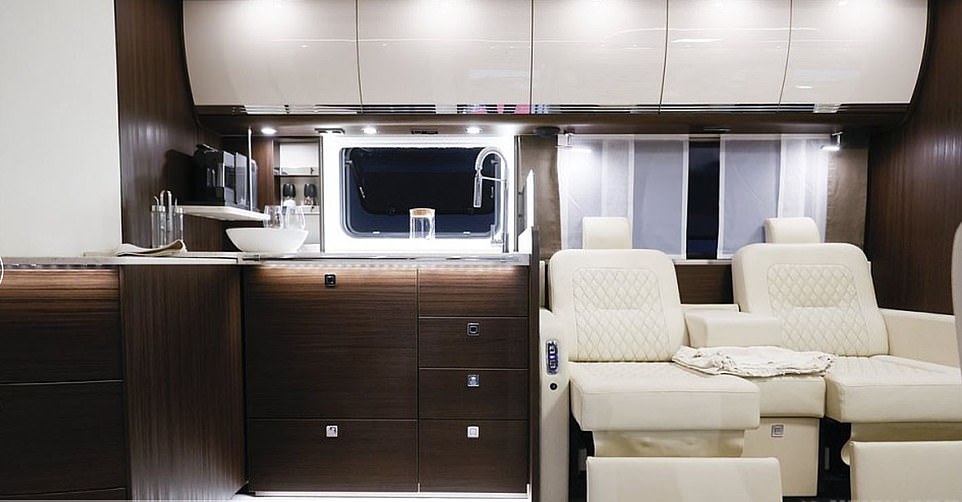 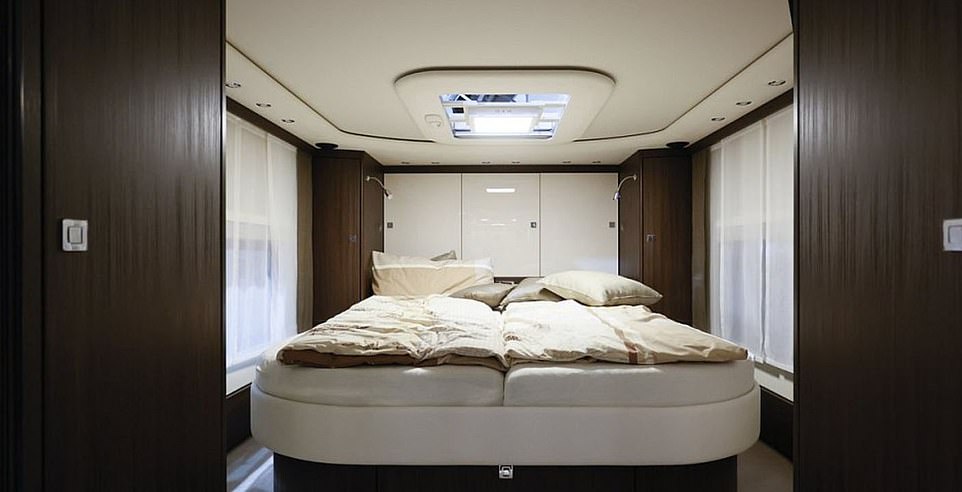 A peek at the spacious bedroom inside the Morelo Grand Empire. The vehicle is 39.3ft (12m) long

Facts: The iconic ‘silver bullet’ caravan is made in the US from metal and 3,000 rivets. The 25iB is a new model for the UK and Australia and it takes more than 350 hours for workers to build it from hand.

Facts: The Lusso, made by Hull-based Coachman, was launched in November 2020 but the company says it is already ‘virtually sold out for this season’.

Facts: The Morelo Grand Empire, made by German manufacturers, is built on the large-format truck chassis from a Mercedes-Benz. It is 39.3ft (12m) long, weighs 18 tons and has a 500-litre fuel tank.

Standout features: An onboard garage large enough to fit a Mini Cooper, a slide-out box on the side that increases the width of the kitchen and living room by 1.6ft (0.5m), a fully-equipped kitchen with a dishwasher, custom cupboards for champagne and wine glasses, under-floor heating, massage chairs, retractable TVs from overhead lockers, a state-of-the-art stereo system, remote-controlled air conditioning, a rain shower, a panoramic window in the roof and solar panels.

Production has surged to pre-lockdown levels with the result that sales of new caravans will be between 15,000 and 17,000 by the end of this year. At the same time, there is a thriving second-hand market, together with strong sales for campervans and motorhomes.

Mr Attwood, the head of content at specialist publications including Caravan magazine, Camping magazine and What Motorhome magazine, said: ‘There has been a huge surge in interest in leisure vehicles since the pandemic.

‘Demand for all leisure vehicles has rocketed and dealers are still struggling to feed buyers’ appetite for new and quality used caravans, as well as motorhomes.

‘There is no other type of holiday accommodation that gives people the freedom that a caravan does to tour… Knowing that nobody else has used the onboard facilities except you and your family is very reassuring during these times.

‘What has surprised many newcomers to this lifestyle is the level of luxury and comfort that modern caravans and motorhomes offer.’

Ben Parkin, sales director at Hull-based Coachman, where the luxury Lusso is made, said: ‘A lot of customers are jumping in at the top of the market. The Lusso was only launched in November, but we are already virtually sold out for this season.

‘That is a bit alien to us in the caravan industry because, historically, people would start small and then trade up over the years.

Now we are seeing people pull up in a Range Rover and buy a top-end caravan as their first one.

A new Channel 4 TV series, Carry on Glamping, fronted by Jonny Vegas, will follow how people up and down the country are transforming old vehicles into stunning mobile boutique hotel suites.

The Caravan and Motorhome Club has had two record-breaking months for new memberships. Enthusiast and TV presenter Matt Allwright, who has his own campervan, said: ‘The attraction is really the idea that you have this life support system with you wherever you go.

‘I spend my working life in hotels and I am not a massive fan of them, each one is different and annoying in its own way, but my campervan is always the same, it’s my environment.

‘I get to decide what it looks like, the food that I carry in it, where I stop. As soon as you get away from your house it is an adventure.’

He told the BBC’s World at One that the freedom is a huge advantage.

He said: ‘Nobody is dictating your itinerary, you decide and you can change it as you go around. You genuinely end up discovering the most fantastic parts of this country and overseas.’

He added that the modern caravan is a long way from the cliché. ‘They are warm, properly insulated, properly powered with hot water. It is such a world away from Carry on Camping,’ he said.