SpaceX is close to a ‘de-facto monopolisation’ of space due to its thousands of satellites, claims the head of European space launch firm Arianespace.

The Elon Musk-owned firm has asked the Federal Communications Commission (FCC) for permission to launch up to 42,000 satellites into space.

They are building the ‘Starlink’ constellation that will deliver ‘reliable broadband’ to areas that can’t get access to fibre broadband, with each of the satellites sent into space on a SpaceX-owned and operated rocket.

‘We want space to remain accessible for human activities… but we refuse a Wild West space,’ said Stéphane Israël, CEO of the France-based Arianespace.

‘It really is our responsibility to ensure that low orbit (less than 1,000 kilometres or 625 miles) above the Earth is sustainable long-term,’ he told the UN.

They base the monopoly claim on the fact it could become difficult for others to launch at scale without creating a risk of radio interference or two objects colliding.

SpaceX is close to a ‘de-factor monopolisation’ of space due to its thousands of satellites, claims the head of European space launch firm Arianespace 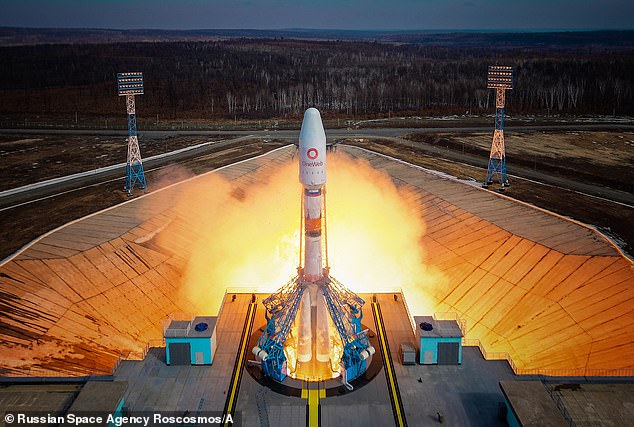 ‘We want space to remain accessible for human activities… but we refuse a Wild West space,’ said Stéphane Israël, CEO of the France-based Arianespace, launch provider for OneWeb

Elon Musk’s SpaceX has over 1,600 Starlink satellites in orbit.

They will eventually form a constellation of thousands of satellites, designed to provide low-cost broadband internet service.

Its goal is to beam superfast internet into your home from space.

While satellite internet has been around for a while, it has suffered from high latency and unreliable connections.

Starlink is different. SpaceX says putting a ‘constellation’ of satellites in low earth orbit would provide high-speed internet all over the world.

Musk has previously said the venture could give three billion people who currently do not have access to the internet a cheap way of getting online.

It could also help fund a future city on Mars.

In the US, the FCC welcomed the scheme as a way to provide internet connections to more people.

Musk’s firm recently asked the FCC for permission for a total of 2,800 satellites to orbit 340 miles above the Earth, the same region where Amazon has been approved to operate more than 1,000 satellites.

By the end of this decade nearly 50,000 satellites could be orbiting the Earth, experts predict, with many in a low Earth orbit.

SpaceX rivals have claimed that by having so many of their satellites within a single orbital region increases the chance of collisions and radio interference.

‘SpaceX has already deployed 1,677 satellites for Starlink, which means that today, of all satellites in operation, 35 percent belong to one man – Elon Musk’, said Israël.

He said: this many satellites in one region was a risk, and ‘very quickly, we could find ourselves in a catastrophic scenario that would render this orbit impractical.’

Israel said there was ‘a risk of de-facto monopolisation’ for Starlink given they were one of the first to operate a constellation network, suggesting that is what Musk is ‘banking on’ by securing the green light from the FCC for yet more satellites.

Arianespace is a joint venture between Airbus and Safran and operate in a sector set to be worth $26 billion by 2017. They have the contract to launch OneWeb satellites, operating at a higher orbit than SpaceX.

OneWeb will launch 36 satellites later today to bring the company a step closer to starting commercial service by the end of the year.

However, OneWeb plans to sell to other telecom firms, rather than directly to consumers, providing extra capacity for an operator in areas not served by fibre.

The other major player, hoping to get into the sector before SpaceX develops a monopoly is Amazon, who have signed an agreement with United Launch Alliances to send more than 1,100 satellites into low Earth orbit.

They will operate at a similar orbit to the SpaceX satellites, prompting the two firms to have to agree to the risk of radio interference.

Its Kuiper System had been designed to avoid avoid interference with Starlink, but that was put at risk when SpaceX was given permission by the FCC to operate all of its satellites in the 340 mile orbital range. 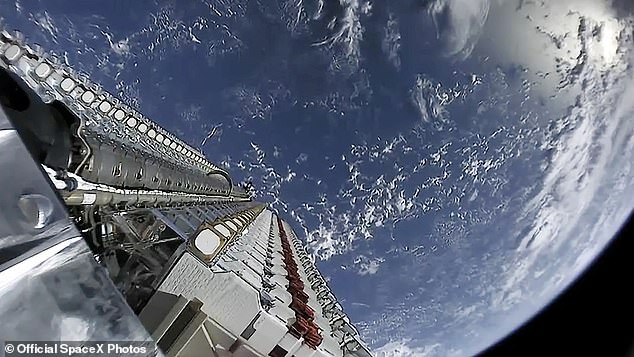 They are building the ‘Starlink’ constellation that will deliver ‘reliable broadband’ to areas that can’t get access to fibre broadband, with each of the satellites sent into space on a SpaceX-owned and operated rocket

‘Those changes not only create a more dangerous environment for collisions in space, but they also increase radio interference for customers,’ Amazon said.

Musk responded by saying that it doesn’t serve the public ‘to hamstring Starlink today for an Amazon satellite system that is at best several years from operation.’

Israel suggested that this dominance in that orbit and dominance in the launch sector giving them a monopoly is ‘rather what our competitor is banking on.’

In a bid to counter the dominance of SpaceX in the launch sector, the European Space Agency launched an initiative to study ‘future space transport solutions’.

It involved giving $600,000 to each of ArianeGroup, Avio and Rocket Factory Augsburg to find more competitive launch systems.

SpaceX may face a legal challenge from a rival satellite operator who has called for a halt to Starlink launches pending an environmental review of the megaconstellation.

Broadband firm Viasat called on the US Federal Communications Commission (FCC) on Friday to stay a license modification allowing for Starlink’s expansion in low orbit.

The megaconstellation, which promises to offer high-speed internet access around the globe, presently numbers more than 1,600 satellites.

To reduce projected lag in the network, SpaceX requested the FCC approve a change to their original plans, bringing some 2,800 satellites into lower orbits.

Viasat intends to make the case in federal court that the FCC needed to conduct an environmental impact assessment before giving the go ahead for this change.

The firm’s stated concerns — which have been mirrored by scientists — include around how the Starlink constellation is affecting astronomical observations.

Other environmental worries include the megaconstellation’s potential to increase orbital debris and pollute the atmosphere by means of disintegrating satellites.