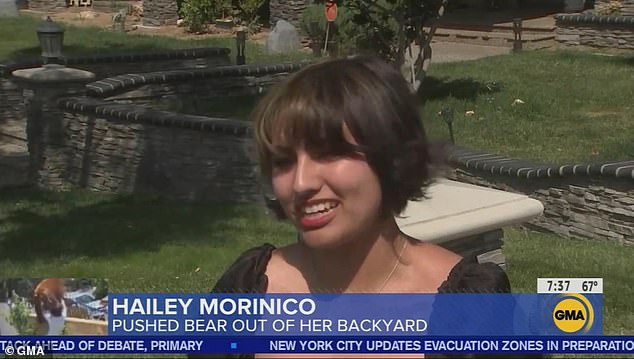 A California teen who charged at a huge bear in the backyard of her home says it was a split-second decision she made in order to save her beloved dogs.

Hailey Morinico, 17, was seen on her home surveillance camera Monday charging towards the predator after it clambered atop a wall outside her Bradbury residence.

The mother bear was with her two young cubs looking for food before she began pawing at Morinico’s four barking canines – Wednesday, Sparkles, Valentina and TJ.

‘Honestly, I did not know it was a bear until right after I pushed it,’ Morinico told Good Morning America on Wednesday of the now-viral footage that shows her beating the bear away from her pooches.

‘I didn’t know I had it in me to be honest. Who does that? Who in their right mind pushes a bear?’

Hailey Morinico, 17, is speaking out after charging at a huge brown bear who appeared in the backyard of her home

Morinico was seen on her home surveillance camera Monday charging towards the predator after it clambered atop a wall outside her Bradbury residence.

Morinico’s mom, Citlally, also appeared on the morning program and said she was ‘horrified’ by the footage of her daughter’s brush with the brown bear.

Miraculously, Morinico only ended up with a sprained finger during the encounter and experts say she is lucky to be alive.

‘The is nothing more dangerous than a mother bear with her cubs,’ wildlife expert Ron Magill told Good Morning America.

‘Never run at an animal and never make physical contact. That could be disastrous.’

Morinico also appeared on CNN, accompanied by one of her beloved pet pooches that she helped save from the clutches of the hungry mother bear.

‘I was like, oh, my gosh, there is a bear, and it is taking my dog. It is lifting her off the ground. If I don’t do something about it, who knows what might happen to her,’ the teen told hosts John Berman and Brianna Keilar. 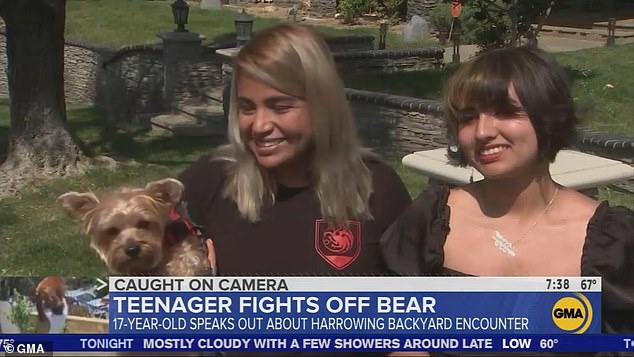 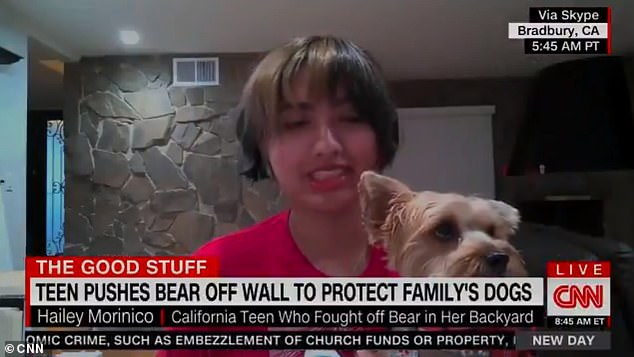 Morinico also appeared on CNN, accompanied by one of her pooch Valentina, who she helped save from the clutches of the hungry mother bear 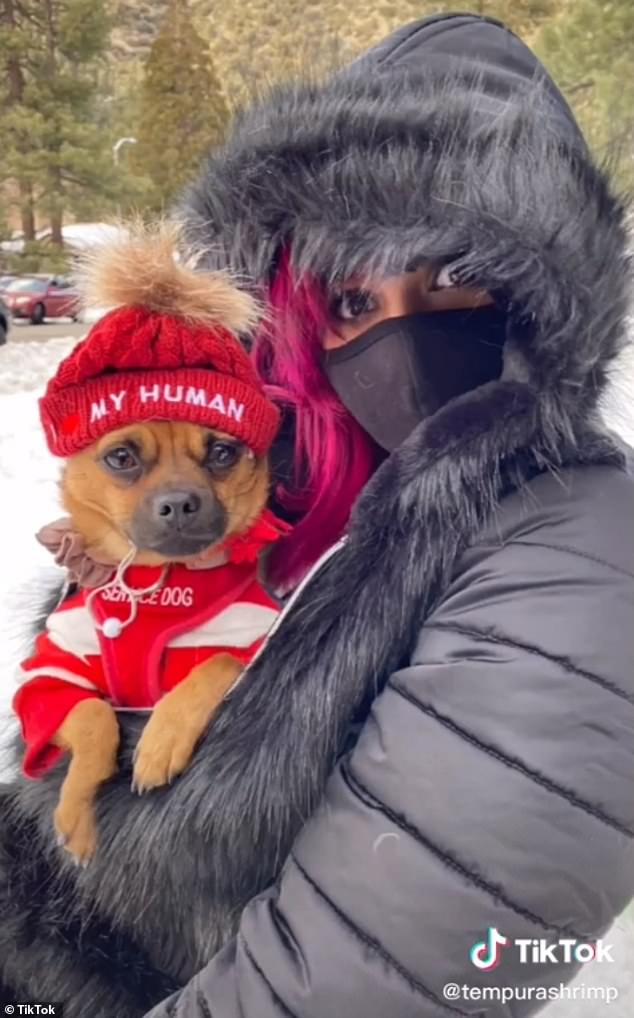 Video of Morinico’s encounter with the animal went viral after she first shared it on Tiktok.

She told her followers on the social media site that she initially heard her dogs barking and went to tell them to stop.

‘When I go over there to see what they’re barking at I’m like, “ok that’s a funny looking dog,”‘ she recounted.

The teen then realized she was standing face-to-face with a giant black bear, who had its eyes on her smallest pooch, Valentina.

‘She’s the baby and as her slave I have to protect her,’ Morinico remarked.

The teen’s instincts kicked in and she charged at the animal without a second thought.

‘I go over to the bear I look at it in the eyes and the first thing I think to do is push it,” she explained to her TikTok fans.

‘Push a bear, push an apex predator, man. And to be honest I don’t think I pushed her that hard, I just pushed her enough to make her lose her balance. So she drops my dog and I run out of there.” 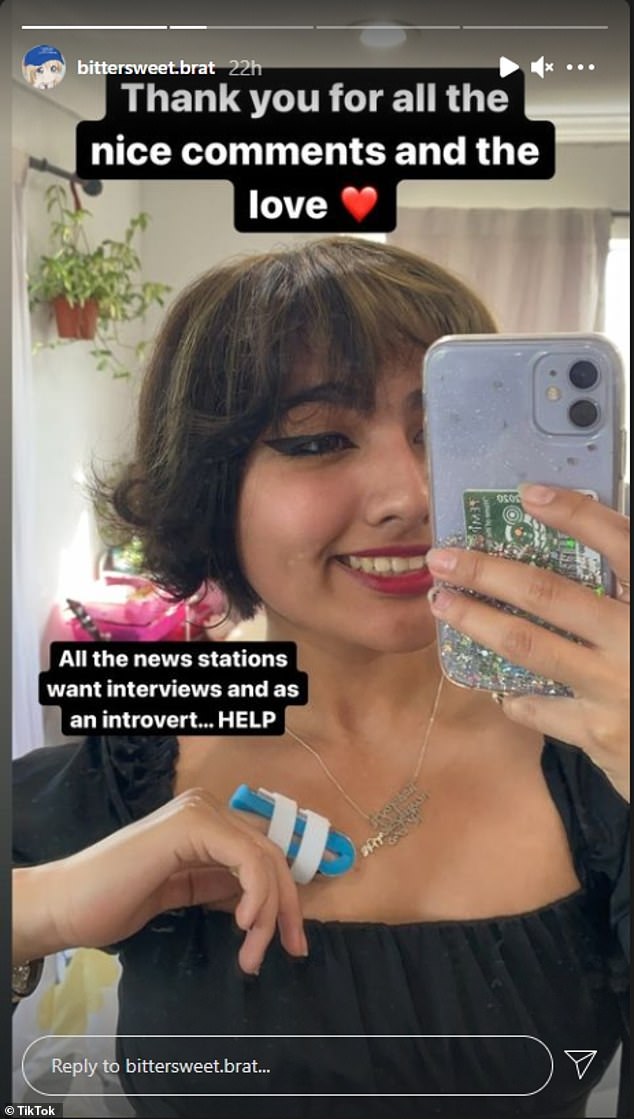 Brush with a bear – and a brush with fame! Morinico made several appearances on morning TV on Wednesday after the world watch her dramatic encounter with the gigantic bear 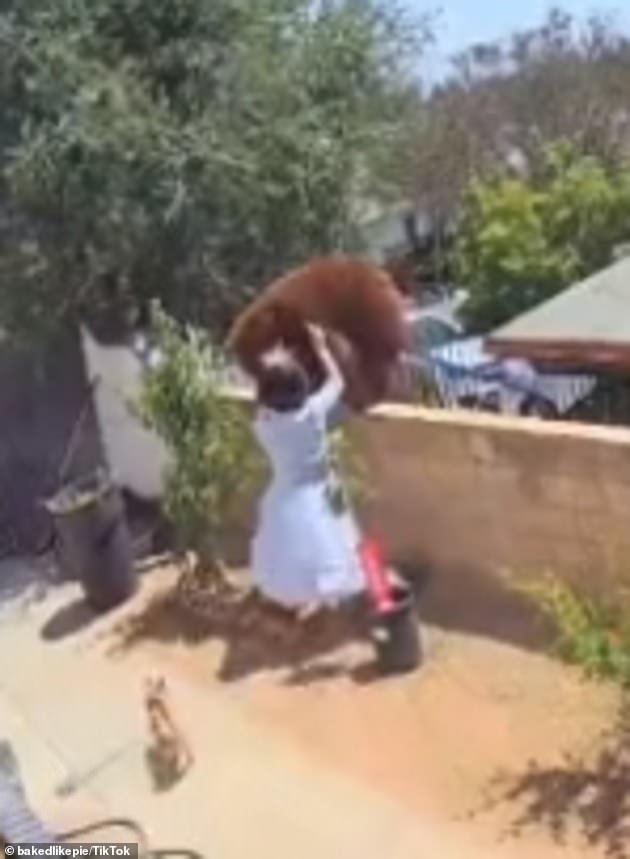 The wild scene was captured on surveillance video and posted to TikTok, where it quickly went viral 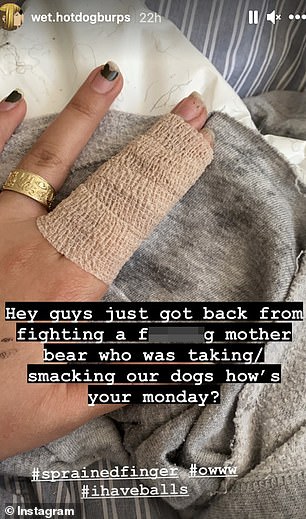 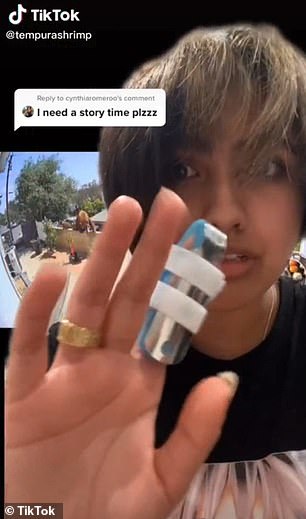 In a true fight-or-flight moment, the teenager daringly approaches the fully grown adult black bear and pushes it off the wall before immediately gathering her pets and going inside. She showed off her injuries on Instagram and TikTok

TikTokers noted how fast the woman was able to jump into action to protect her pets, while commending her for bravery and quick-thinking.

‘You are dog mom of the century,’ another TikToker commented.

Morinico said that in her location bear sightings were common during the summer. 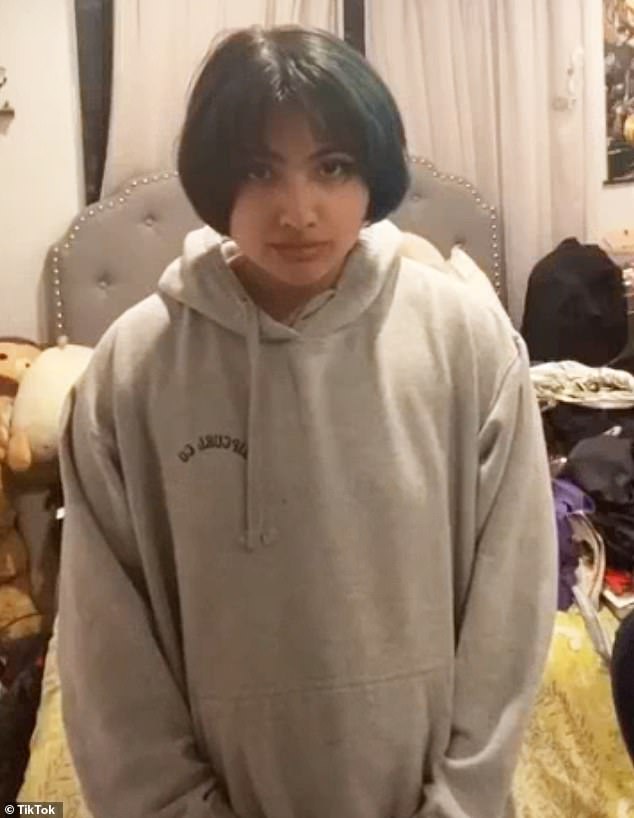