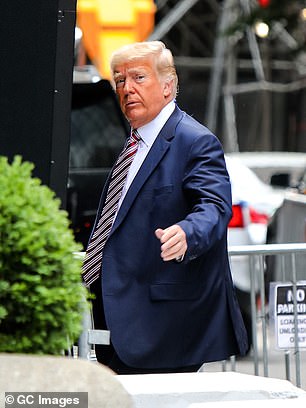 BREAKING NEWS: Trump permanently SHUTS DOWN his website From The Desk of Donald Trump where he posted his statements to get around his social media ban after a month

Donald Trump’s blog webpage where he started posting his statements last month is shut down for good.

‘From the Desk of Donald J. Trump’ has been scrubbed from the former president’s website and instead the URL redirects users to a page to sign up for his email and text alerts.

Senior Trump aide Jason Miller told CNBC that the site ‘will not be returning.’

‘It was just auxiliary to the broader efforts we have and are working on,’ he added.

He promised to set up his own social media site, which he said is different from the ‘desk’ blog.

Miller claimed he is ‘hoping to have more information on the broader efforts soon’ regarding the new social media site.

‘I do not have a precise awareness of timing,’ he said.