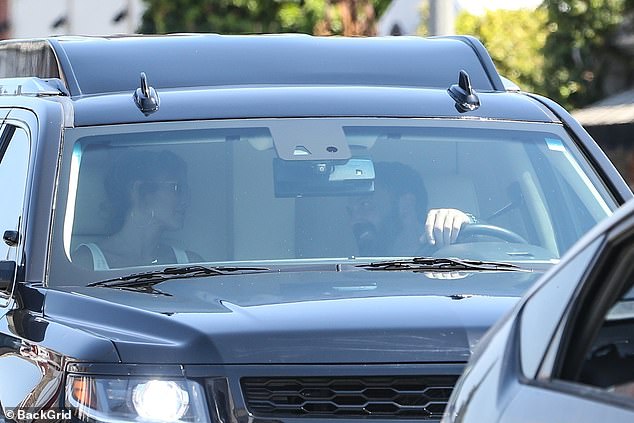 Jennifer Lopez and her ‘true love’ Ben Affleck were seen grabbing lunch at the Brentwood Country Mart with their kids on Friday afternoon.

The loved up couple beamed at each other in a black Escalade before tenderly embracing after stepping out with Ben’s son Sam, nine, and and JLo’s daughter, Emme, 13.

The blended family sighting comes amid reports that the pair are set to move in together ‘very soon,’ and that both want to be ‘involved’ in each other’s children’s lives.

Getting serious: Jennifer Lopez and Ben Affleck grab lunch with their kids at the Brentwood Country Mart amid reports they are set to move in together ‘very soon’

The Hustlers star, 51, looked effortlessly stylish in a summery white jumpsuit which she accessorized with a yellow Louis Vuitton bag and a pair of neon accented sneakers.

Beating the LA heat her hair was tied up in a top knot and she was seen emerging out of a white SUV with Emme, while Ben and Samuel arrived in his black SUV.

The Good Will Hunting actor, 48, donned his usual casual display as he rocked jeans and sneakers and he showed off his bulging muscles in a fitted grey T-shirt. 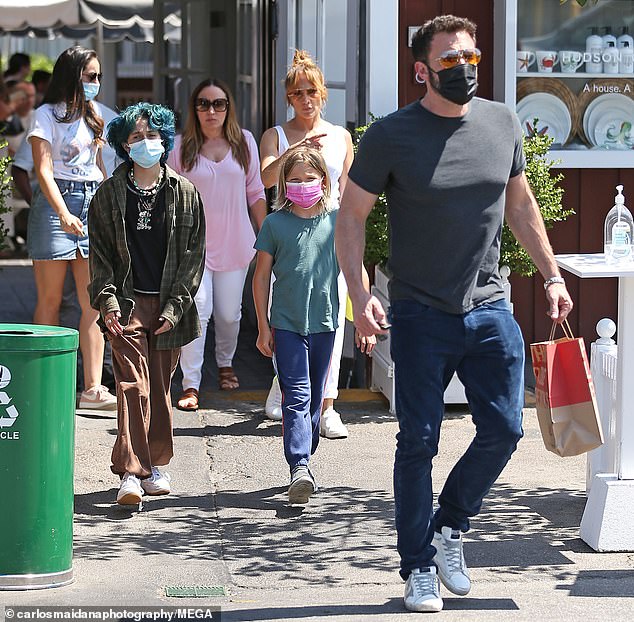 Pack mentality: The kids looked to get on swimmingly and it had been reported that both wanted to be ‘involved’ in the other’s kids’ lives 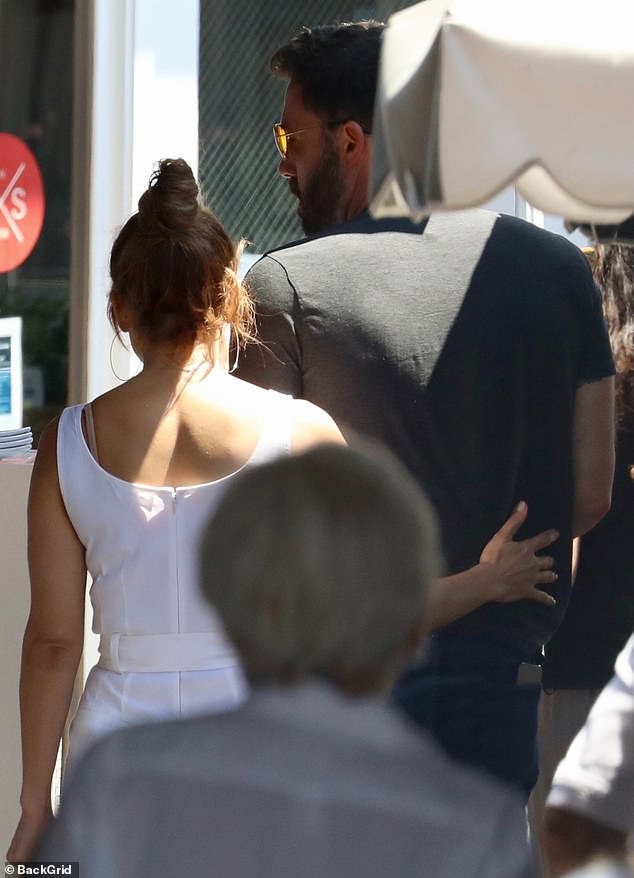 Tender touch: She couldn’t keep her hands off her hunky man during the outing 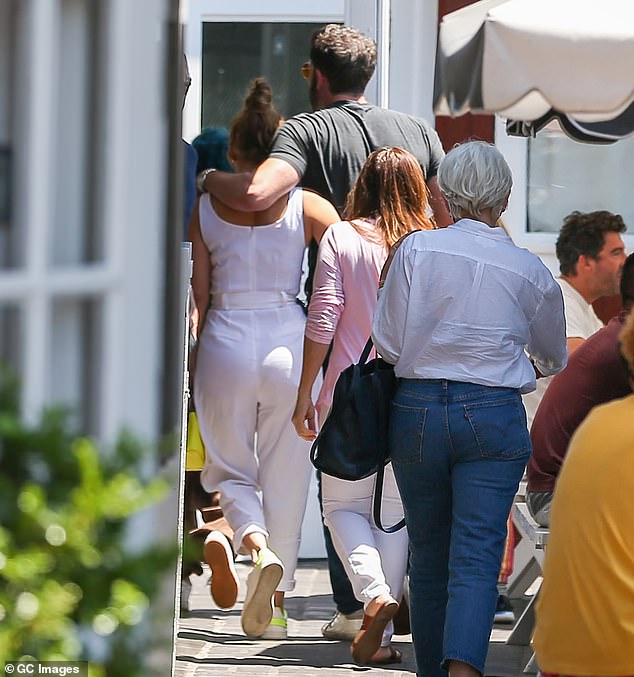 PDA: Ben was seen wrapping his arm over his former fiancee while she put her hand around his waist

Ben was seen ordering for the group at a food window while sharing a chat with Emme who stood next to he and Garner’s son Samuel.

And Lopez couldn’t keep her hands off her man as she tenderly rested her hand on his back before they enjoyed lunch.

Despite arriving separate the pair were seen leaving sans-kids in Ben’s ride and he proved to be the ultimate gentleman as he opened the door for her before they shared a laugh.

The sighting comes after the pair spent a romantic weekend together in The Hamptons for July 4, before they jetted back to Los Angeles together. 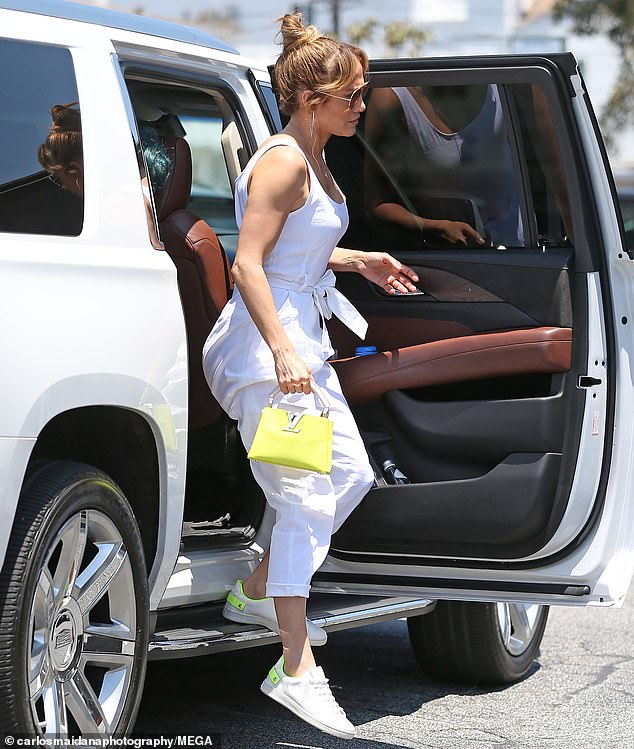 Arriving solo leaving together! Despite arriving in different vehicles they left together after lunch 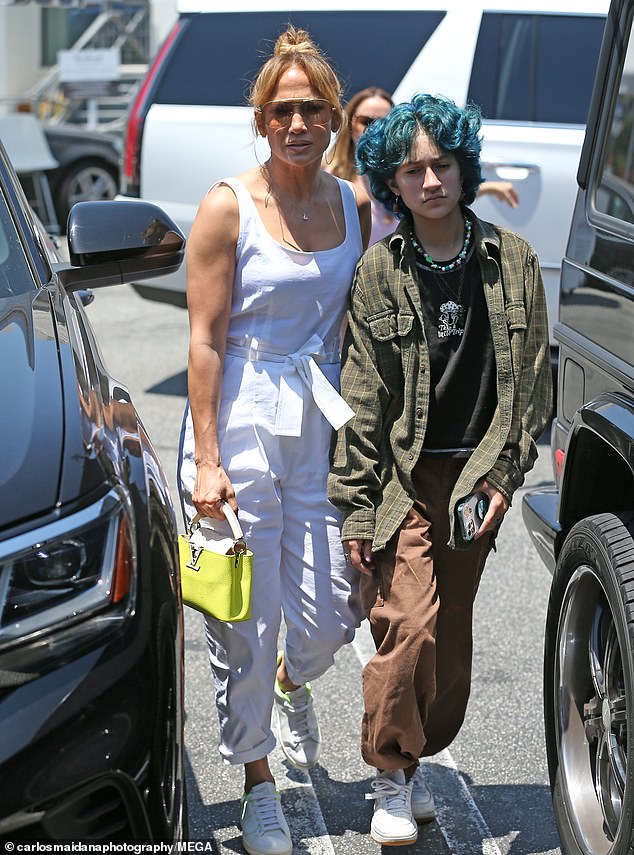 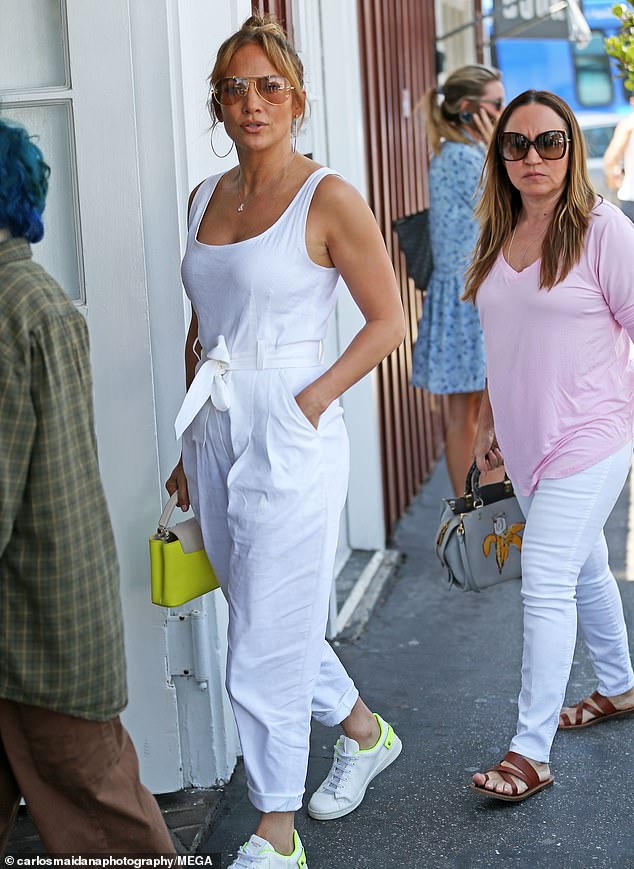 Radiant: The JLo beauty founder showed off an expert tan and her usual flawless skin

Amid the fizzling of her two-year engagement to Alex Rodriguez and her blossoming love with her new-old flame, Lopez seems to have ditched her Miami life to spend more time in Los Angeles.

Additionally she was photographed touring ritzy private schools on the westside for her twins in recent months.

And though it had been said they didn’t want to ‘rush’ anything, according to a July 8 Us Weekly report the pair have plans to move in together ‘very soon.’

‘Ben and Jen are spending almost every night together when they’re not working,’ an insider said. ‘They plan on moving in together very soon.’ 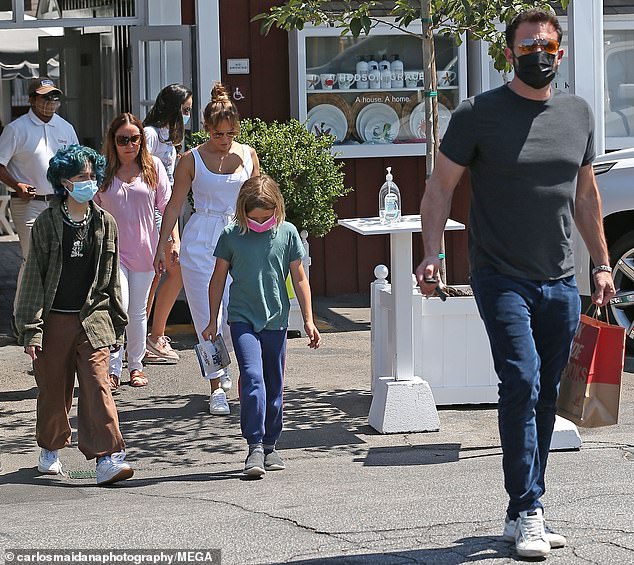 Inseparable: The duo reportedly spent every night together and Lopez was seen touring ritzy private schools in LA for her kids after ditching her Miami life

Ripped! The Good Will Hunting actor showed off his bulging muscles in a grey shirt 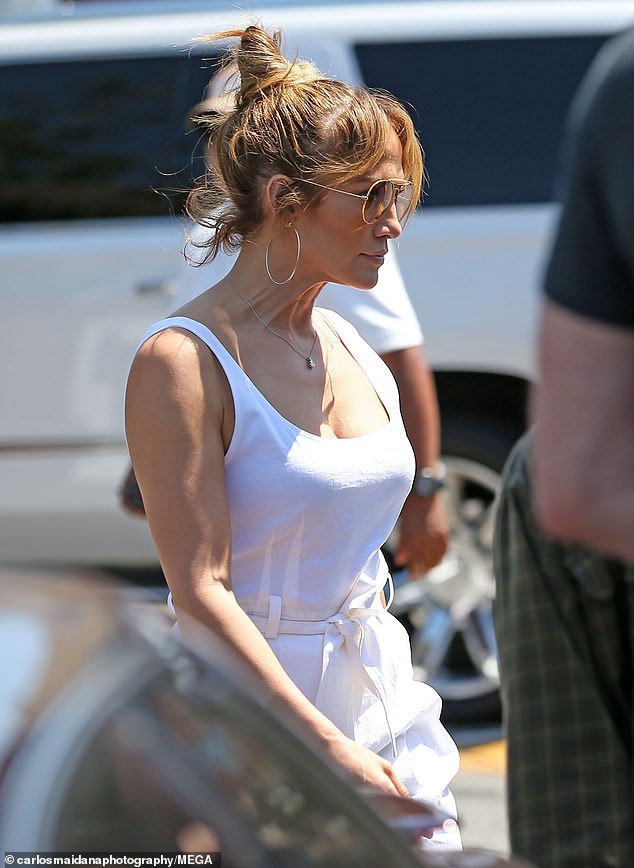 By his side: ‘They’re fully committed to taking the next steps and spending the rest of their lives together,’ according to Us Weekly 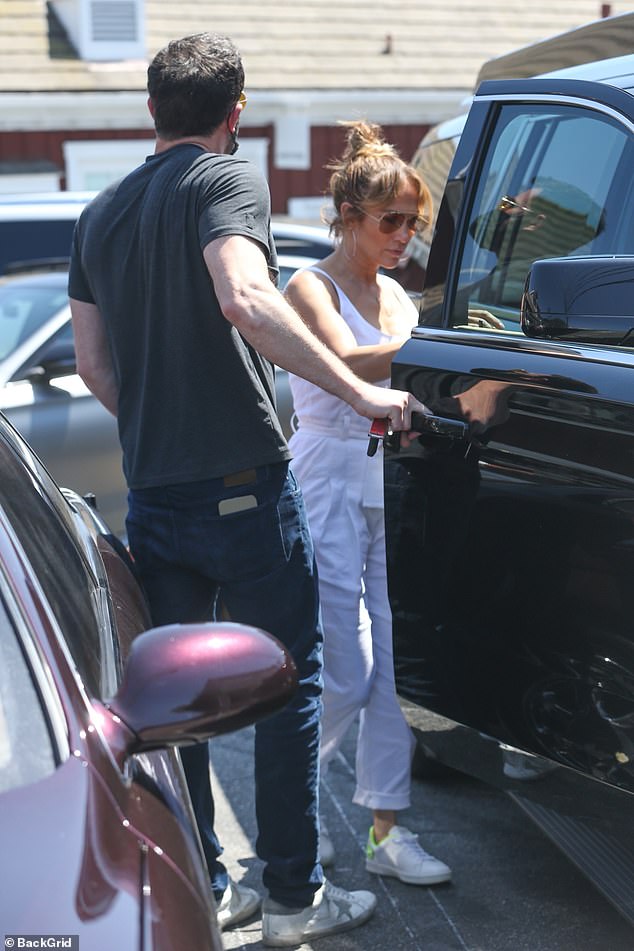 Doting: He was seen opening the door to his SUV for the superstar as they drove off together

And on July 7 the publication reported that the formerly engaged pair are ‘committed’ to ‘spending the rest of their lives together,’ after realizing they’ve found ‘true love.’

‘They’re fully committed to taking the next steps and spending the rest of their lives together…As far as they’re both concerned, they’re just blessed to have found each other and discovered true love, which most people can only ever dream about.’

As she and Affleck continue to blend families (he shares children Violet, 15, Seraphina, 12, and Samuel with ex Jennifer Garner) it has also been said that she ‘intends to be an involved stepmom who’s there for Ben in that area.’

On Thursday another source told People that Ben is ‘bonding,’ with both kids swimmingly and that the couple continue to be ‘beyond happy.’ 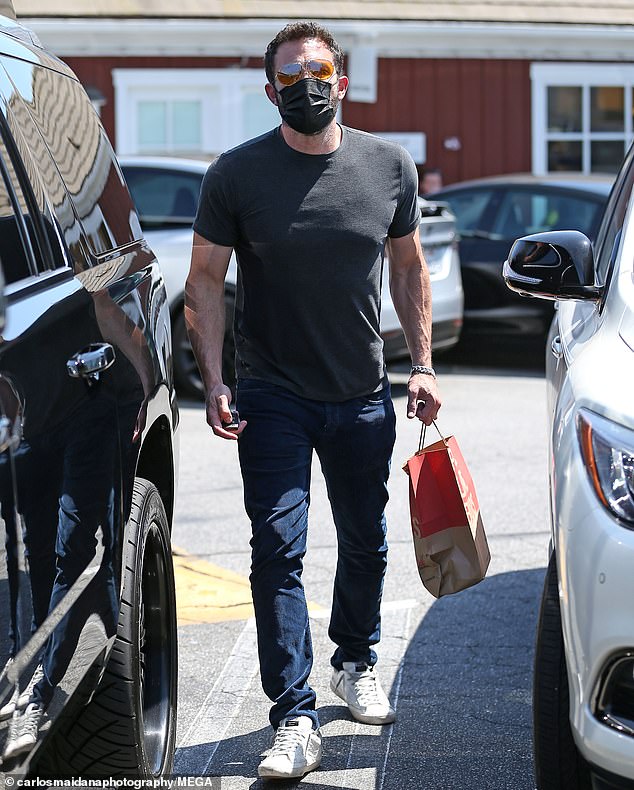 ‘Happy’: Sources have reported that Bennifer are ‘beyond happy’ and feel ‘blessed’ to have rekindled after their failed 2002 engagement 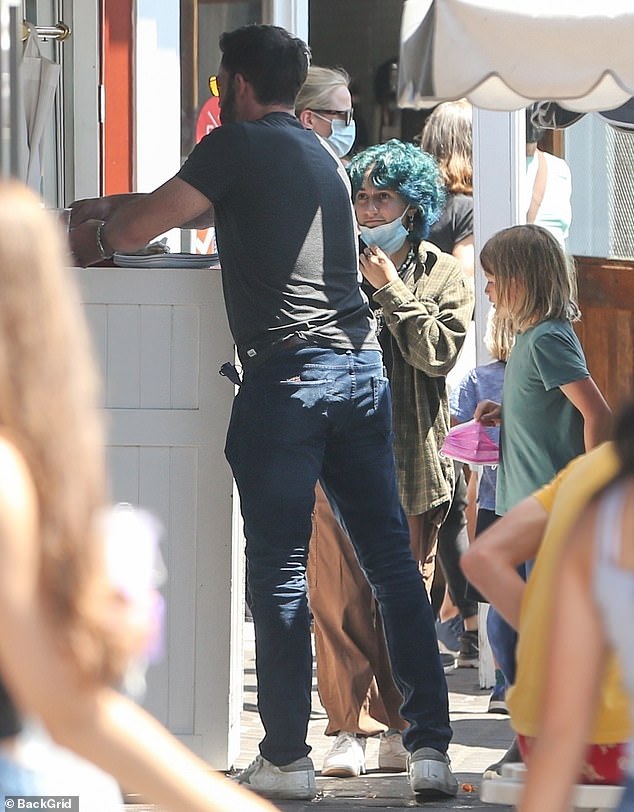 Step dad? He looked to be the ultimate doting stepdad-to-be as he spent quality time with both he and Lopez’s kids 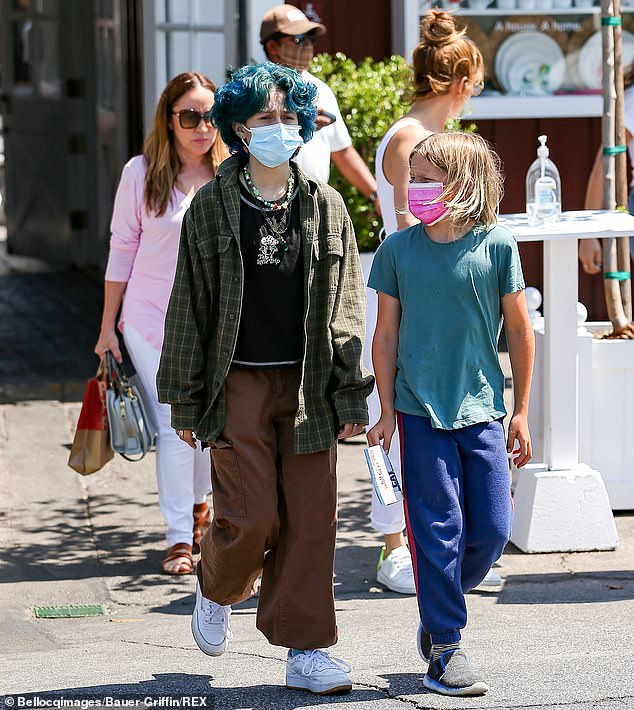 Step-siblings? Emme and Samuel were seen walking together after lunch