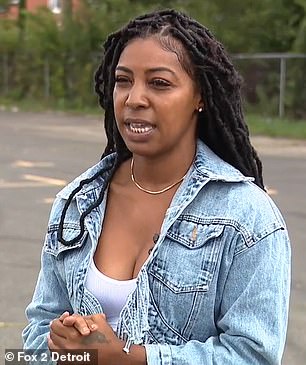 Wild video captured the moment a Detroit woman tracked down a man she accused of stealing her Mercedes Benz and dragged him out of a barber shop before performing a citizen’s arrest.

Bianca Chambers, the owner of a local boutique, recorded the video via Facebook Live on Wednesday, two days after she claimed her car was stolen by a 19-year-old man.

She said she decided to take matters into her own hands after the Detroit Police Department refused to help her get it back.

However on Friday, Detroit Police Department 2nd Deputy Chief Rudy Harper explained to DailyMail.com that officers responded to each of Chambers calls about the stolen vehicle, which he said belonged to an associate of hers.

Chambers told FOX 2 she tracked the stolen vehicle across the Greater Detroit area for two days before she moved to confront the suspect herself.

According to the video she posted online, the tracking system showed the car parked outside of a barbershop.

The video shows her arriving at the salon and asking the unnamed suspect: ‘Excuse me, you got that Benz out there?’

He answers ‘yeah,’ to which she replies: ‘You stole my s**t’ before grabbing onto his dreadlocks in an attempt to pull him out of the shop. 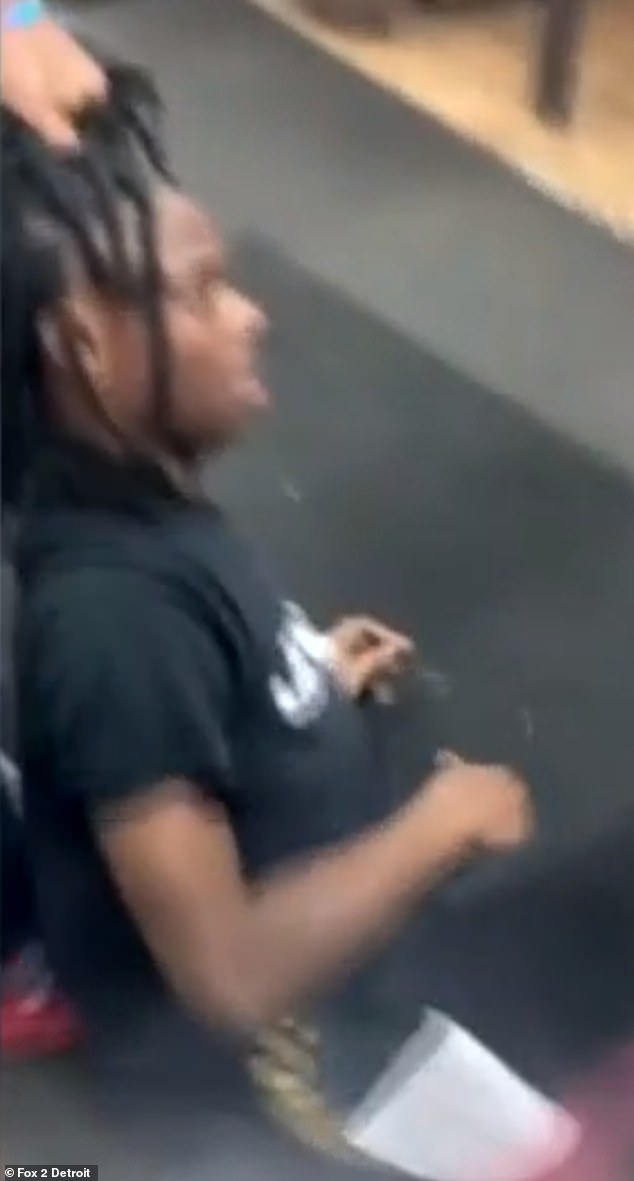 ‘At that point, I was like…I’m not letting this man walk again,’ Chambers explained.

Customers at the barbershop helped Chambers make a citizens’ arrest and held the suspect until police could take over.

Harper advised against civilians confronting suspects on their own in his interview with DailyMail.com.

‘It is dangerous. It isn’t worth it to take this type of action,’ he said.

Prior to confronting the suspect, Chambers reportedly slashed the tires on the car in effort to prevent him from fleeing.

‘I slashed all the tires and I thought that he was gonna take off and I didn’t know how long it was going to take for the police to pull up. And I refused to let him pull off again,’ she told FOX 2. 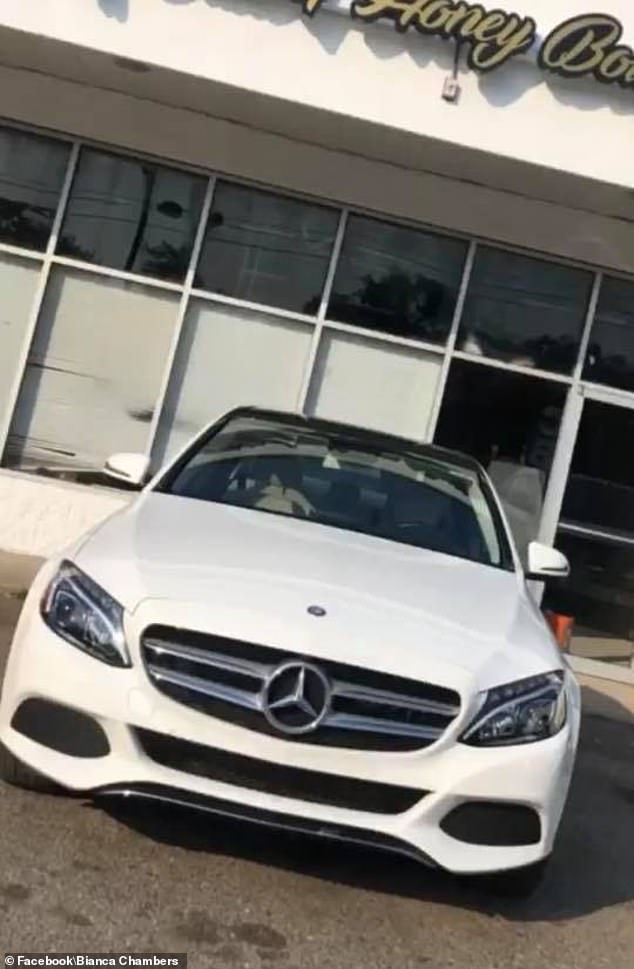 Chambers says she tracked the stolen vehicle (pictured above) across the Greater Detroit area for two days before deciding to confront the suspect. 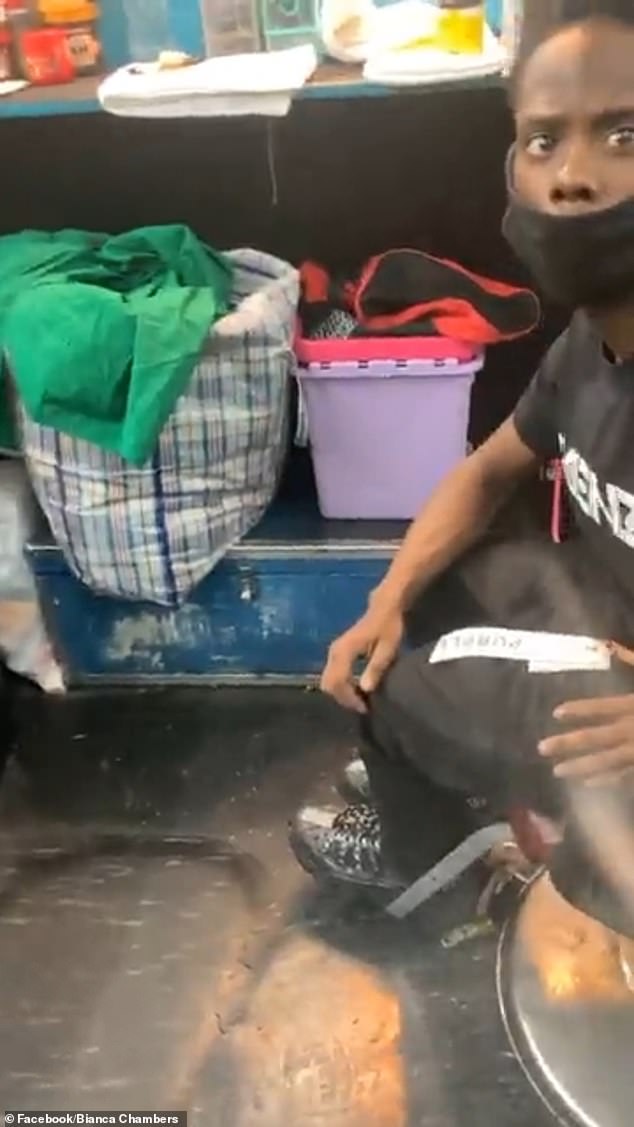 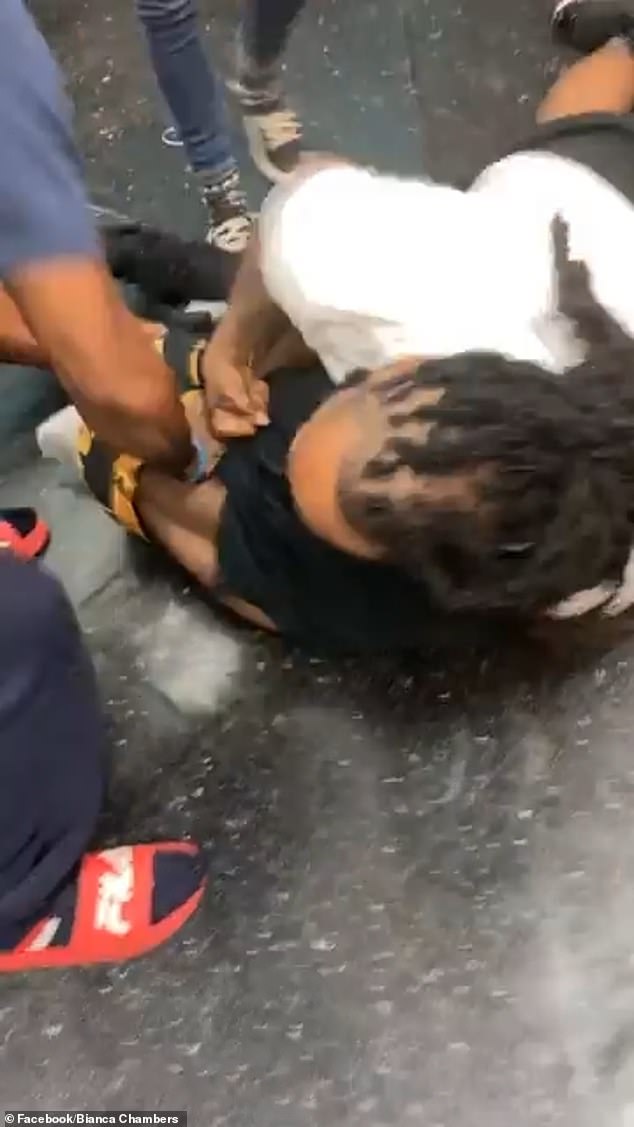 Customers at the barbershop helped Chambers make a citizens’ arrest and held the suspect until police could take over, as seen in the image above

Chambers claims she called 911 several times to alert police of the stolen vehicle’s location and no one responded.

However, police who say the stolen Mercedes Benz did was not actually Chambers’ car but instead belongs to her boyfriend, sent officers each time she called.

According to Detroit Police Department dispatch records, officers responded to four locations where Chambers claimed the vehicle was. The Mercedes was not found at any of the locations.

During her last 911 call, which was made at 1.05pm on Wednesday indicating that the car was at the barbershop, officers were responding to a kidnapping call nearby. Officers arrived on scene at 1.45pm.

Chambers began her Facebook Live from outside the barbershop at 1.29pm.

The suspect, 19, was not arrested at the barbershop. Harper said a warrant request has since been sent to the Wayne County Sheriff’s Office. His identity will not be released until an arrest warrant is issued.

Police say the man opted not to press charges against Chambers for the physical altercation.

FOX 2 reported that the suspect has a history of car thefts, however police would not confirm that information.

The situation remains under investigation. 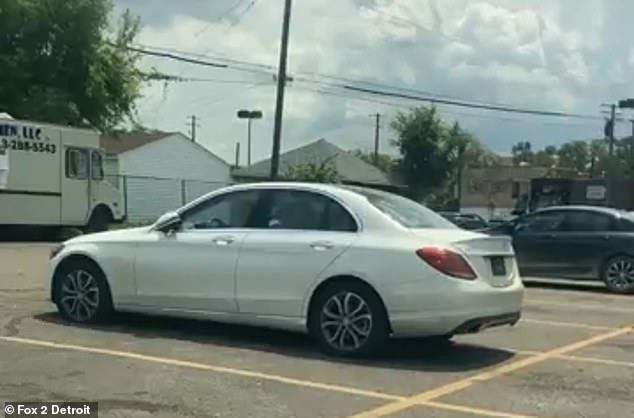 Police say they responded to all of Chambers’ 911 calls reporting the stolen vehicle (pictured) but when they arrived it wasn’t at the location she indicated. They also note that the Mercedes actually belongs to her boyfriend

The incident also comes the Detroit Police Department, like most forces nationwide, is facing staffing shortages.

A survey published by the National Police Foundation in 2020 revealed that 86-percent of America’s police forces have reported a shortage of sworn officers.

Currently, the department is holding a 12-week hiring event that began on June 18 in an effort to find new recruits. According to Harper, there are more than 100 positions within the Detroit Police Department and openings in every department.

However, Harper reiterated that staffing shortages did not impact the incident involving Chambers.

‘We’re no different than any police department across the country right now,’ he said. ‘Of course [the shortage] impacts response times when you have Priority 4 calls. But Priority 1 calls, we are getting to those.’

Priority 1 calls include major crimes such as kidnappings or homicides. Chambers’ calls were considered Priority 4.