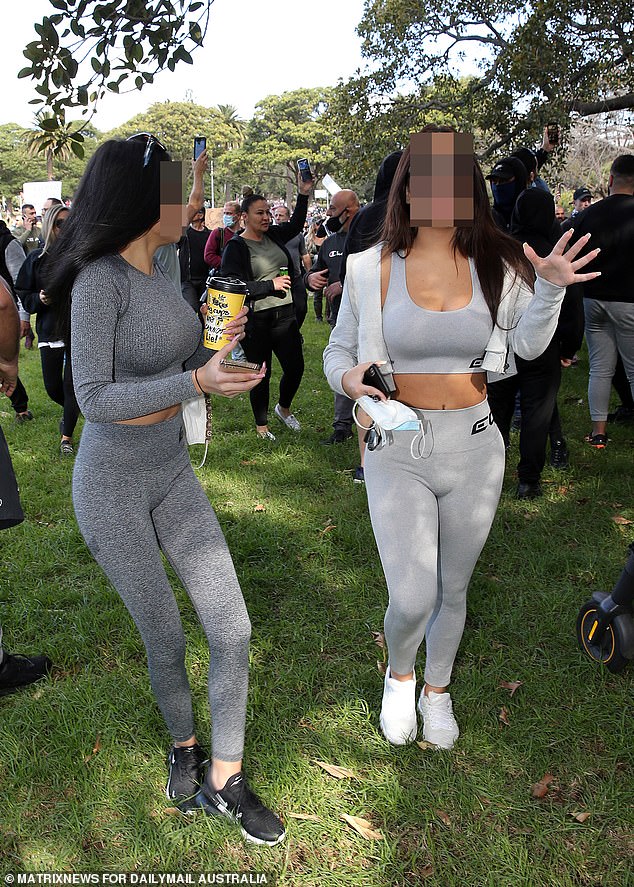 ‘I need two hours to get ready’: Glamorous women caught up in Sydney’s anti-lockdown rally wearing activewear and a full face of makeup become the target of hilarious meme

Two young women who were caught up in Sydney’s anti-lockdown rally on the weekend have found themselves at the centre of a viral meme.

Sydney, Melbourne and Brisbane CBD streets were flooded with thousands of protesters on Saturday voicing their frustration over increasingly tough restrictions.

The two women were dressed in activewear, makeup and with one carrying a takeaway coffee when they were pictured alongside the crowd as Sydney’s protest got underway at about midday at Victoria Park.

Glamour girls: Two young women wearing activewear at Victoria Park (pictured) during Sydney’s anti-lockdown rally have found themselves at the centre of a viral meme

The meme shows the two women alongside a collection of vapes, skin-tight activewear, false eyelashes, white sneakers and sunglasses.

The meme’s author also included a mocked-up text message suggesting how the pair’s conversation might have gone.

‘Babe wanna go to that protest in the city?’ the exchange begins.

‘Ye babe let’s go! But I need two hours to get ready,’ is the reply.

It’s hard to say whether the fashionable pair were participating in the protest or had just been out for a walk and got caught up in the crowd.

The two were carrying no protest signs, were holding face masks and were dressed as if they were out exercise rather than attend a rally.

They were also pictured together away from the rest of the crowd.

Under Sydney’s lockdown restrictions exercise outdoors in pairs of two is completely fine and masks are not required in outdoor open spaces. 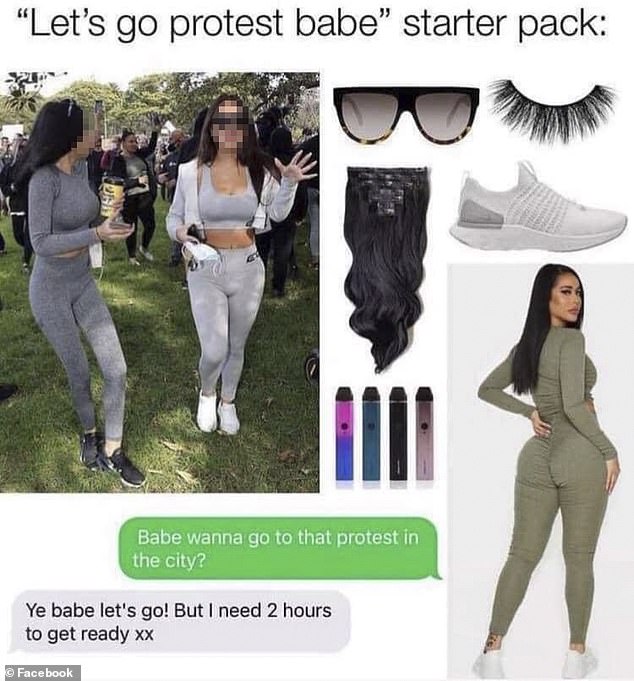 More than half of Australia’s population of 25million are under stay-at-home orders after an outbreak beginning in Sydney’s east spread to Victoria and South Australia.

The protest in Sydney got underway about midday in Victoria Park with the crowd spilling onto Broadway and then marching in their thousands through the CBD to Town Hall.

Once in the city the group was met by police with violent clashes breaking out between some of the more unruly members of the group and officers.

Footage emerged of bottles being thrown at mounted police officers as they tried to direct the flow of the crowd.

There were similar scenes in Melbourne as protesters were met by lines of police on Flinders Street. 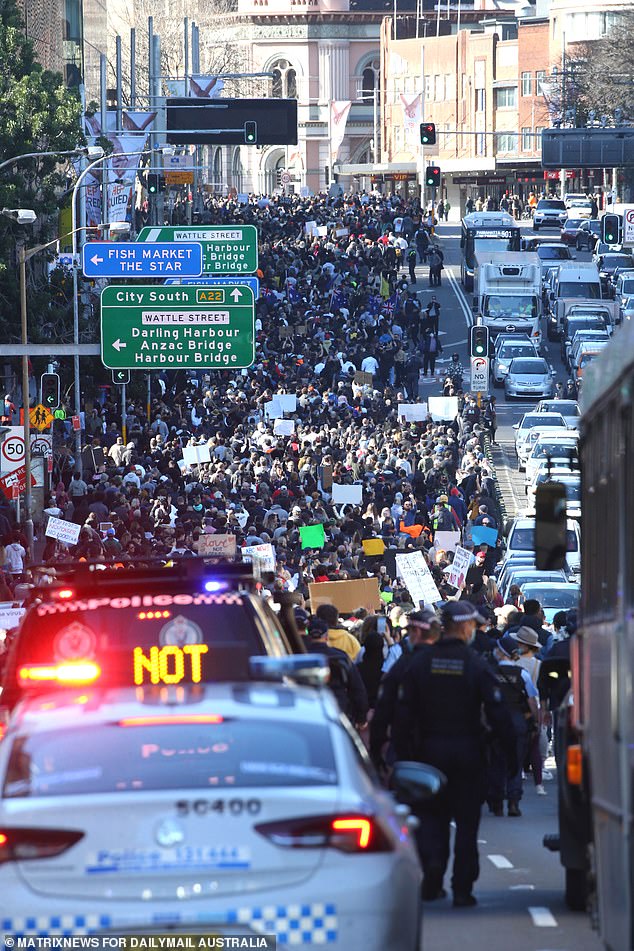 Crowds in Sydney: Thousands of protesters swarmed George Street in the CBD for the anti-lockdown demonstration on Saturday

NSW Police have charged 57 people and 90 fines have been issued.

A 33-year-old Surry Hills man and a 36-year-old man from Edensor Park fronted court on Sunday after they allegedly struck a police horse during the protest.

The Edensor Park man was also charged with assaulting a police officer.

NSW Police said they have received 5000 tip-offs and identified more than 200 people who attended after a special task force was set up in the aftermath of the protest.

In Victoria, 73 people have been fined and six people arrested for attending the protest.

Premier Daniel Andrews described protesters as ‘selfish’ but was reasonably confident it would not become a super-spreader event, given the state’s 11 new cases had all been linked and were in isolation.