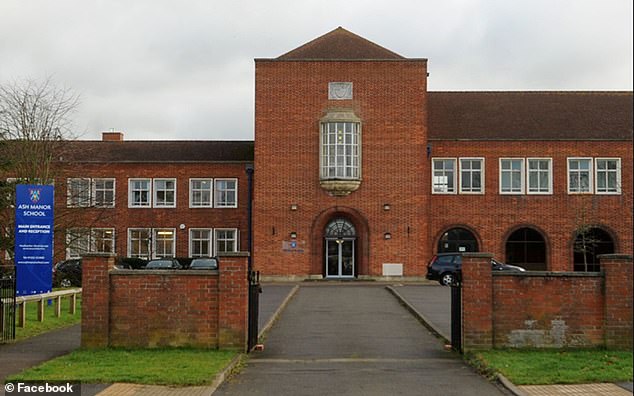 A teacher who vowed to stop a transgender Year 11 pupil from becoming Head Girl has been spared a ban from the profession but has been fired.

French mistress Susan Field was accused of referring to the former male pupil as ‘that’ in front of a class of 21 children in her Year 11 tutor group at Ash Manor School in Surrey.

Ms Field – also known by her married name as Ms Spare – was said by watchdogs to have a previously ‘unblemished 35-year teaching career’.

But she was dismissed for gross misconduct after the conversation with her tutor group was reported by a pupil’s mother.

She was said to have whipped up feelings against the transgender student while promising to make her bottom choice for election to the student body which helps lead the school.

She appealed against the ruling of an internal inquiry to fire her but lost. Her case was then referred to the Teaching Regulation Agency who decided there was no need to ban her because the publicity alone would be punishment enough.

Teaching watchdogs have now ruled she probably did not specifically refer to the child, referred to only as Pupil I, as ‘that’.

But they did find allegations proven that she was guilty of making ‘inappropriate and transphobic’ remarks while discussing Pupil I’s candidacy for the Student Senior Leadership Team.

She admitted saying Year 7 should not be introduced to ‘that kind of thing’ or ‘that sort of thing’ in reference to the possibility of Pupil I being elected as a role model to represent the school.

She also admitted that she promised to use her teacher’s vote to rank Pupil I in last place in the upcoming Head Boy and Head Girl selection.

The disciplinary hearing in Coventry was told during the 10 to 15-minute conversation in May 2019, various pupils described Pupil I as ‘it’, ‘that’ and ‘disgusting’.

Other ‘hostile and derogatory language’ was also used which Ms Field, failed to challenge, the Teaching Regulation Agency panel said.

She told her former bosses: ‘I did intend to use my teacher vote to rank Pupil I in last place, as I felt that Pupil I was the least representative student to be Head Student in a school of 900+ children.’

During the investigation, she admitted telling her tutor group: ‘I said it’s not appropriate for a member of the LGBTQI to represent Ash Manor School.’

She also admitted that she felt at that time that ‘children as young as 11 years old might be confused or uncomfortable with having Pupil I as a role model’.

The panel was told Ms Field had taught at Ash Manor from November 2012 and was one of the school’s highest paid teachers when dismissed in June 2019.

Pupil I is a transgender student who had publicly identified as female to the school and pupils since the start of a previous academic year.

Staff were briefed that she wished to identify as a girl, would have a girl’s name, and that female pronouns should be used when referring to her.

Ms Field was dismissed for gross misconduct after a disciplinary hearing into her remarks and subsequently lost her appeal.

Chris Rushton, who chaired the panel, said: ‘There were numerous examples that a number of derogatory or hurtful remarks had been made by pupils against Pupil I based on Pupil I being transgender during the tutor group conversation.

‘The panel found it concerning that Ms Field had allowed such hostile and derogatory language to be used and had not challenged it during the discussion.

‘Ms Field admitted that at no stage during the discussion did she interject to admonish pupils for making derogatory comments.’

Ms Field denied calling the pupil ‘That’ and the panel decided on the ‘balance of probabilities’ she probably said pupils should not have to see ‘that’ – in reference to the fact that Pupil I might join the Student Senior Leadership Team.

But the panel concluded the comments were ‘a clear reference to Pupil I being transgender and were derogatory’.

It was also claimed Ms Field quipped ‘It’s all rather stupid’ with reference the transgender/LGBT community – but that allegation was found unproven.

Ms Field told the school’s internal inquiry: ‘I did express an opinion and deeply regret it. I realise now it was wrong.

‘It was not professional. I realise that now and regret the whole thing. At that point in time, my comment didn’t show respect’.

Sparing her a teaching ban, Alan Meyrick, for the education secretary, underlined the panel’s findings that: ‘Ms Field had shown clear and genuine remorse for her actions in relation to the proven allegation both during the school’s investigation and at the hearing.

‘It was clear to the panel that Ms Field was greatly ashamed and upset that her actions had negatively affected some of the pupils.’