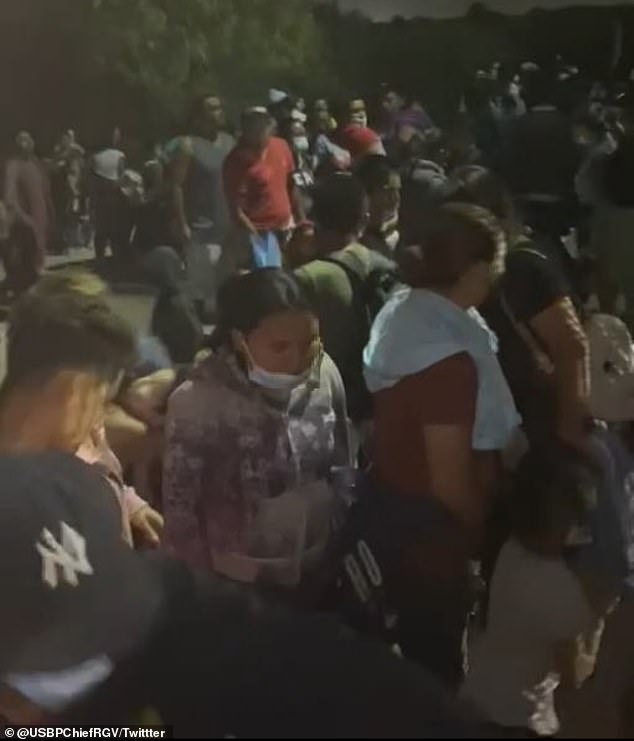 Massive caravan of 509 migrants, including 115 unaccompanied minors, stopped by U.S. Border Patrol in Texas border town less than 24 hours after 336 people were detained after illegally crossing from Mexico

By Adry Torres For Dailymail.com

U.S. Border Patrol agents encountered one of the largest groups of migrants in recent memory when a caravan of 509 people from Central and South America was stopped after illegally crossing the United States-Mexico border into Texas.

According to the Rio Grande Valley Sector, agents assigned to the McAllen Border Patrol Station were patrolling the border area near Hidalgo, Texas, when they came across the group, which was made up of 331 family members and 115 unaccompanied minors on Tuesday night. A total of 63 single adults were also part of the group, who were all taken into custody.

The encounter with the undocumented migrants is considered to the the largest to date in the Rio Grande Valley Sector since the U.S. Customs and Border Patrol sector started logging numbers in 2007.

The caravan was made up of migrants from Ecuador, Venezuela, El Salvador, Guatemala, Honduras and Nicaragua.

U.S. Border Patrol Rio Grande Valley Sector agents near Hidalgo, Texas, stopped a caravan of 509 migrants from Central and South America after they crossed the United States-Mexico border Tuesday. It’s considered to be one of the largest group encountered byRio Grande Valley Sector  agents since the department started keeping a log on apprehensions in 2007 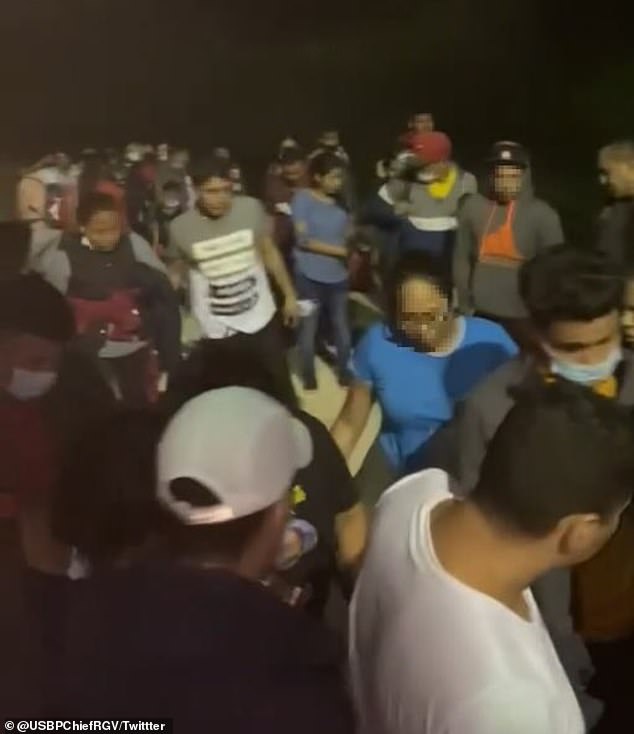 The caravan of 509 migrants, including 115 unaccompanied minors, that was stopped and taken into custody Tuesday night was made up of citizens from Ecuador, Venezuela, El Salvador, Guatemala, Honduras and Nicaragua 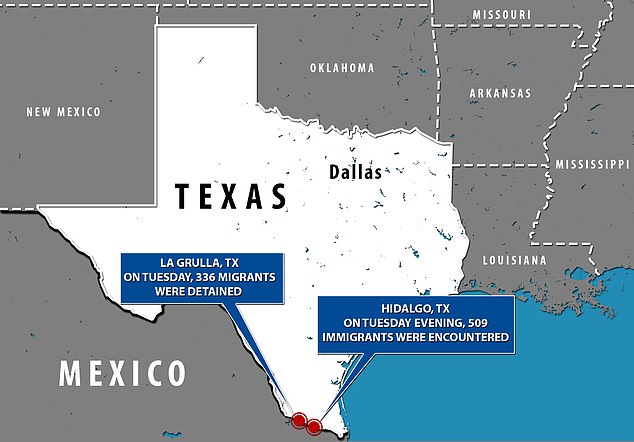 ‘From the river to the ranchlands, our agents are doing everything they can do to locate and rescue individuals who are lost or distressed,’ Rio Grande Valley Sector chief patrol agent Brian Hastings said in a statement.

The apprehension came just less than 24 hours after Rio Grande Valley Sector agents took 336 migrants, including eight unaccompanied children, into custody near La Grulla, Texas, after they crossed over from Mexico via the Rio Grande.

Most of the migrants were given medical treatment for dehydration and exhaustion. Some of the individuals were hospitalized.

The migrants were identified as citizens of Guatemala, Nicaragua, Honduras and El Salvador. 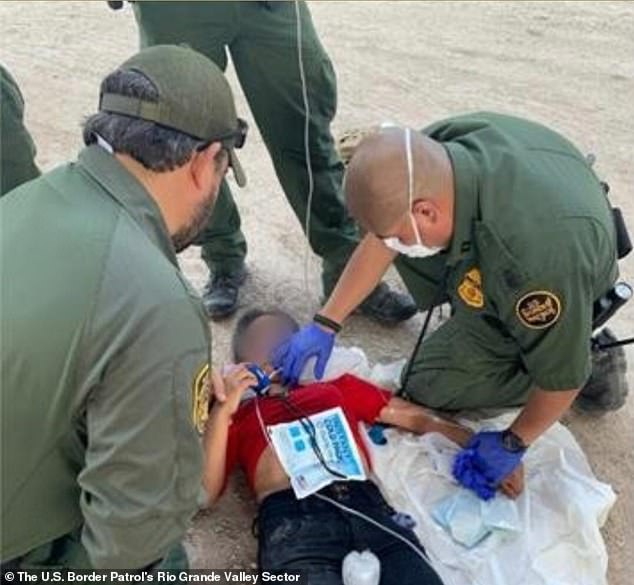 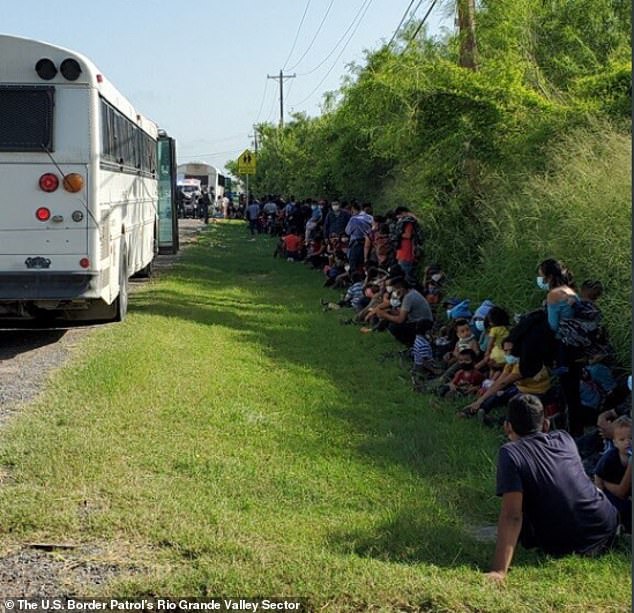 Children and adults await to board U.S. Border Patrol buses in Texas after they were detained for crossing the United States-Mexico border on Tuesday 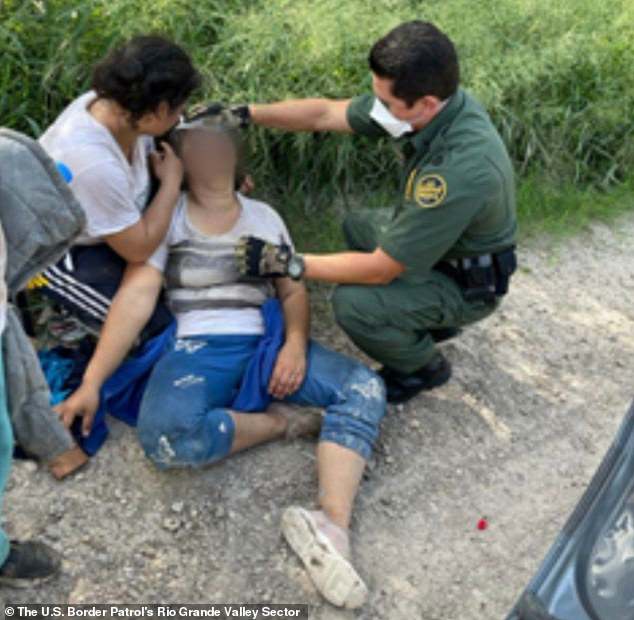 A woman is treated for a heat-related illness near the United States-Mexico border in Texas on Tuesday. The woman was among a group of 336 migrants who were stopped by officers assigned to the U.S. Border Patrol’s Rio Grande Valley Sector

According to the Rio Grande Valley Sector data, more than 20,000 individuals apprehended last week for illegally entering the United States along the southwestern border.

A CBO spokesperson told DailyMail.com that 47 percent of the sector’s agents are occupied with processing and transporting the large group of migrants who have been flooding through the southwestern border, thus putting the nation’s security at risk.

More than 1.07 million migrants have been apprehended between October 1, 2020 and January 30, 2021. Rio Grande Valley Sector agents have intercepted 331,661 migrants – an increase of 46% compared to the year before.

CBP’s report last month showed that of the 188,829 migrants were stopped for illegally crossing the United States-Mexico border in June. 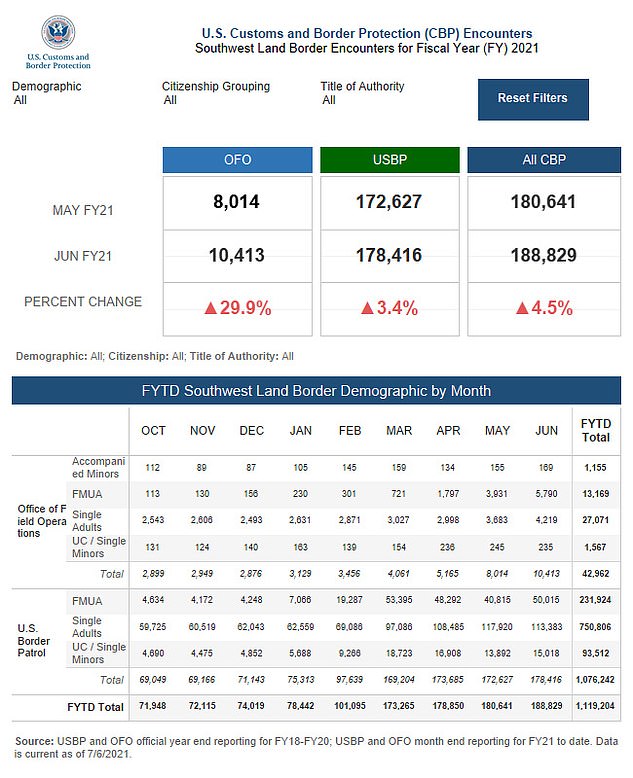 Figures released July 16 show 188,829 migrants were encountered at the southwestern border in June, even more than U.S. Customs and Border Protection recorded in May