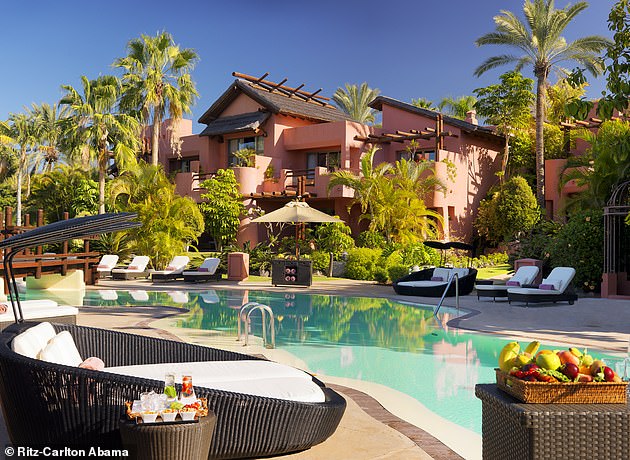 All hail Emma Raducanu! Her dramatic rise from qualifier to winner of the U.S. Open aged 18 – without dropping a single set along the way – is expected to encourage children across the country to take up tennis.

For those keen to try the game, how about a half-term holiday at one of the many first-rate European resorts with coaching academies? Here, Escape rounds up some of the best tennis breaks on offer . . .

Splash out: The Ritz-Carlton in Tenerife offers tennis breaks – ten hours of lessons for a family of four cost from £500

Emma Raducanu would be familiar with the seven courts at the Ritz-Carlton, Abama in Tenerife — they have the same surface as at Flushing Meadows, where she won the U.S. Open. The coaching here suits all levels, and combined family sessions can be arranged, overlooked by volcanic peaks with the ocean shimmering on the horizon. Quite a setting. 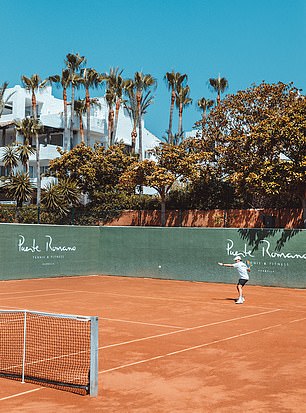 Puente Romano Beach Resort in Marbella, Spain, was opened by the former world No 1 Bjorn Borg

Puente Romano Beach Resort in Marbella, Spain, was opened by the former world No 1 Bjorn Borg. So expect top instruction on eight clay courts and four padel courts. Family coaching is available, too, and there’s an excellent seafood restaurant, a steakhouse and a Six Senses spa.

Game on: From £4,023 for a week’s B&B for a family of four, including Heathrow to Malaga flights in October half-term; tennis instruction is an extra £307 per child (ba.com).

Choose between standard or ‘intense’ coaching courses for juniors at the Aphrodite Hills Tennis Academy in Paphos, which has four clay courts and five hard courts. Standard courses cover ten hours of instruction over five days, while intense courses are 20 hours with a focus on tactics. Aphrodite Hills also has five-star apartments, a golf course, a spa and a cycling centre.

Game on: Five nights for a family of four in a self-catering, two-bed apartment cost from £3,028 during the October half-term, including Gatwick flights; five-day standard courses £234, intense courses £383 (olympicholidays.com). 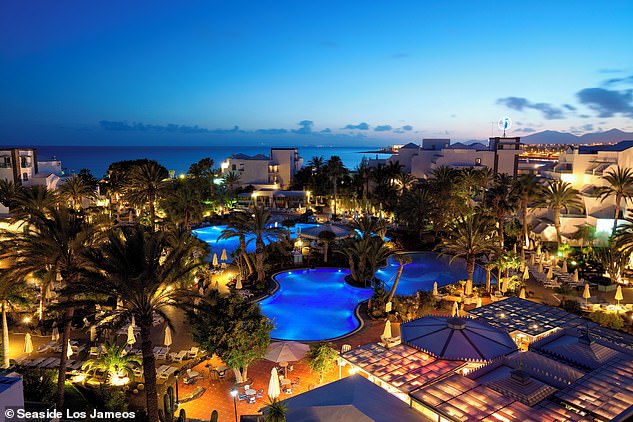 Beginners are welcome to attend the tennis school in the Seaside Los Jameos resort, pictured

Join a group or take individual lessons at the highly regarded Peter Burwash International tennis school at Seaside Los Jameos resort in Lanzarote. Beginners are welcome, with competitions included and a chance to check your serve speed on a radar. There’s also a good spa and piano bar for parents.

Game on: From £2,928 for a week’s B&B for a family of four in October half-term, with Edinburgh to Lanzarote flights; five-day tennis lessons from £193 pp (jet2holidays.com).

Two hours of instruction a day are included at the Vale do Lobo resort in Portugal’s Algarve. You play on clay courts, with competitions and a progress report at the end. A midweek barbecue is included, plus final-night prizes. Also enjoy the beachside pool or mountain biking.

Game on: Seven nights over February half-term cost from £2,660 self-catering for a family of four with two children, including Stansted flights and car hire (lightbluetravel.co.uk). 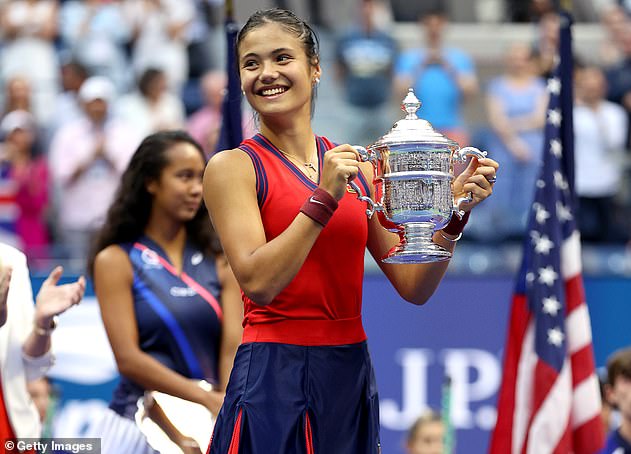 Superstar: Emma Raducanu after her U.S. Open victory. The teen’s success is expected to encourage children across the country to take up tennis

The head of tennis at Forte Village in Sardinia, Italy, is Rocco Loccisano, ex-coach of Australian Wimbledon-winner Pat Cash. With a dozen clay courts, a fun teaching technique and weekly tournaments, it’s a well-run set-up. It’s also home to the Chelsea FC Foundation Soccer School. Parents can head to the spa for yoga and massages.

Game on: Seven nights over October half-term from £4,340 half-board for a family of three, including flights; five days of lessons for a family of four (90 minutes a day) from £1,190 (elegantresorts.co.uk).

Stay at the five-star Pine Cliffs Hotel in the Algarve in Portugal and enjoy the excellent tennis facilities and coaching at the Annabel Croft Tennis Academy. There are two clay courts, three hard courts and weekly coaching programmes for children set by Croft, the former British professional. Enjoy lovely walks along the coast here, too, and fine dining.

Game on: Seven nights over the October half-term cost from £3,516 B&B for a family of four; five-day junior tennis camps cost from £250 (britishairways.com/algarve). 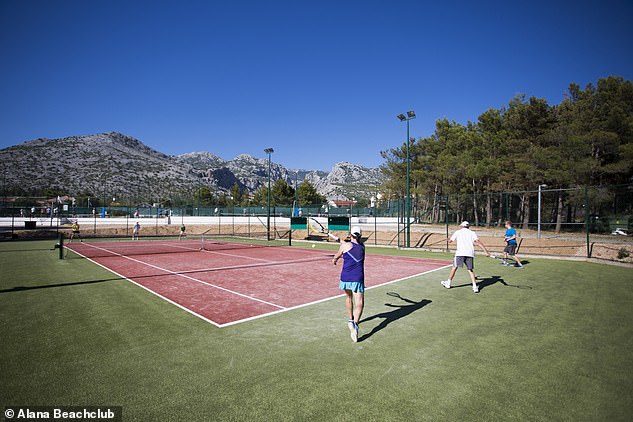 The programme at the Alana Beachclub, pictured, has been set up by Mark Petchey, Andy Murray’s former coach

Lessons are included on the six courts at the Alana Beachclub on Croatia’s Adriatic coast in Paklenica.

The programme has been set up by Mark Petchey, Andy Murray’s former coach. Join groups of your level or sign up for one-to-one lessons. There’s also a spa, mountain biking and dinghy sailing on offer.

Game on: A week costs from £5,419, including lessons, activities, breakfast, lunch, four evening meals and Gatwick flights over the October half-term for a family of four (neilson.co.uk).