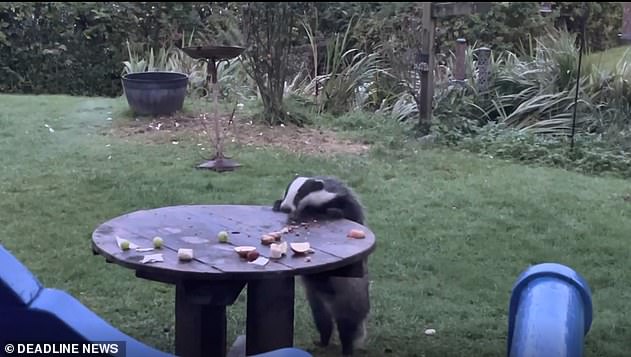 Early brock-fast! Badger stands on its hind legs to tuck into ‘buffet’ of leftovers on a garden table

By Laurence Dollimore For Mailonline


This is the adorable moment a badger stands up to reach a ‘buffet’ of tasty treats which had been left on a picnic table in the Scottish Highlands.

The animal was caught on camera pawing at a pile of fruit and snacks which had been put outside by Kylie Bielby, 47, from Norfolk, who was enjoying a staycation with her husband in Kyle-of-Lochalsh.

Kylie’s clip shows the badger circling the table and persistently clawing at the cocktail sausages, which are placed just out of his reach.

The animal briefly gives up the pursuit and instead takes a bite out of an apple closer to the edge of the table.

A video shows a badger pawing at a pile of fruit and snacks left out by Kylie Bielby, 47, from Norfolk, who was enjoying a staycation with her husband in Kyle-of-Lochalsh 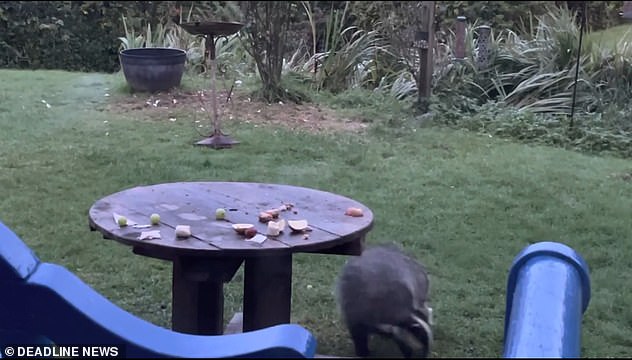 It munches the fruit for a few seconds but then turns its attention back to the meat.

The badger’s frustration seems to build as it does a small hop to try and gain some momentum.

Unsuccessful but still undeterred, the animal shuffles comically around to the other side of the table on its hind legs.

The badger sets to work, reaching out with its snout and paws to knock the cocktail sausages towards itself – but appears to only manage a few more peanuts.

The badger scoffs up what it can before shuffling away.

Ms Bielby uploaded the video to Facebook on Tuesday, writing: ‘Don’t you just hate those buffets where the fancy cakes are too far away and all you can reach is the fruit salad? 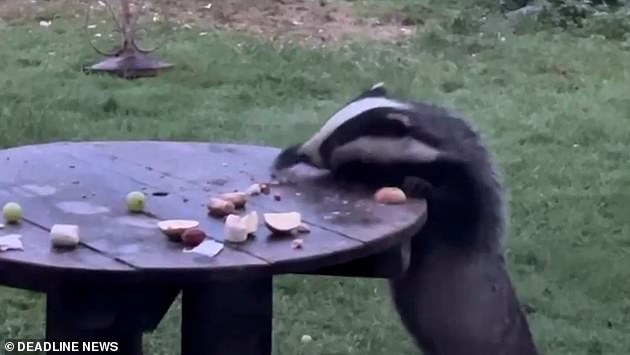 Unsuccessful but still undeterred, the animal shuffles comically around to the other side of the table on its hind legs 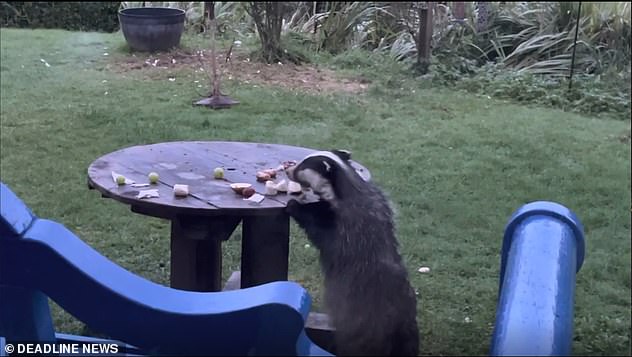 Viewers were left entertained by the clip, with one commenting: ‘Love this! Put a little stool out!’

‘(In this case the fancy cakes were cocktail sausages).’

Speaking today, she added: ‘When we arrived (at the cottage) there were notes explaining what the badgers and pine martens like to eat.

‘So we put out their food on their own picnic table in the evening.

‘The pine marten had been up on the feeding table first and knocked the best food out of reach for the smaller badger.

‘I like to think it wasn’t deliberate but you never know.

‘When he arrived at the table he could only reach the apples and peanuts, but really wanted the cocktail sausages.

‘It reminded me of the times when you are at a buffet and they have put the fancy cakes right at the back and you can only reach the boring fruit salad.

‘After that we made sure we arranged the food so that the pine martens could get to their favourite food (eggs and jam sandwiches) without moving the badger’s sausages.’

Viewers were left entertained by the clip, with one commenting: ‘Love this! Put a little stool out!’

Another added: ‘This is hilarious!’, while one said: ‘Ohhhh bless him.’