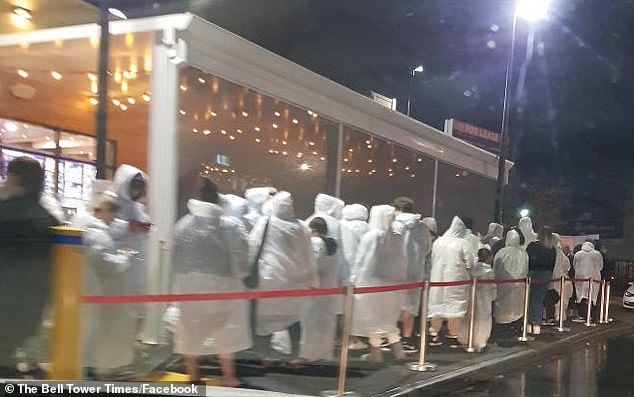 A picture of dozens of hungry customers queuing outside a popular Taco Bell restaurant in the pouring rain has garnered attention online for an unfortunate reason.

The fast food outlet in Perth  has only been open for a week but has seen booming business so far, with lines of customers often streaming out the doors.

Dozens of taco fans went to extreme lengths to get their first Mexican feast, braving pouring rain to line up outside for hours in shop-provided ponchos.

However, the viral photo drew a comparison online to the American white supremacist hate group, the Ku Klux Klan.

Images of people lining up outside Perth’s newly-opened Taco Bell (pictured) have gained social media attention, being likened to a meeting of the KKK

The KKK were often identified by wearing long white robes, masks and pointed conical hats that were intended to hide their identities.

Facebook users flooded the comments section of the images saying how a first glance at the photos confused the Taco Bell line for a KKK meeting.

‘At first, I thought these photos were of a Klan meeting,’ said one amused user.

‘Didn’t know they do clan meetings at Taco Bell,’ wrote another.

‘Think this is a line to go see the Grand Wizard,’ one commented.

‘Looks like the KKK are treating themselves to a night out,’ said another.

One wrote: ‘Glad I’m not the only one thinking it.’ 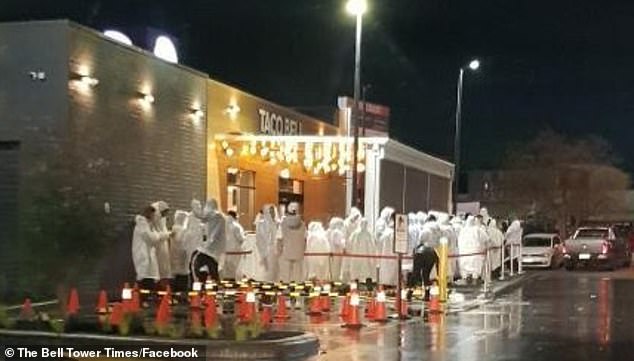 Social media users have flooded the comments of the images, with many saying at first glance they thought the images (pictured) were of the KKK

Many also admired the dedication of the Mexican food fanatics, but also questioned why they bothered to wait hours outside in the cold and rain when the restaurant is now a permanent fixture in the Western Australia city.

‘This just reaffirms the IQ level of majority of Perth,’ said another. ‘Laughed they were there at midnight before it opened on a cold mid-week day.’ 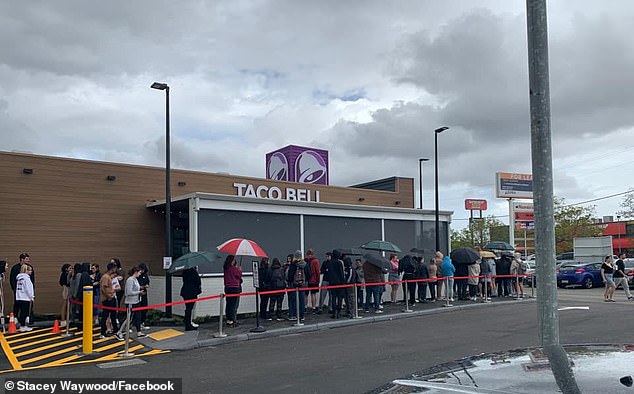 The fast food outlet in Perth has only been open for a week but has seen booming business so far, with lines of customers often streaming out the doors (pictured)

The end of a six-decade long wait for Taco Bell to arrive in Western Australia previously caused so much excitement when the store opened last week, it sparked a traffic jam on a major highway.

Hundreds of people queued for hours to sample the menu at the US fast food giant’s first WA outlet – bringing the Great Eastern Highway in the Perth suburb of Midland to a stand still.

Some even queued all night to ensure they were among the first in the door when the restaurant opened at 10am on September 29. 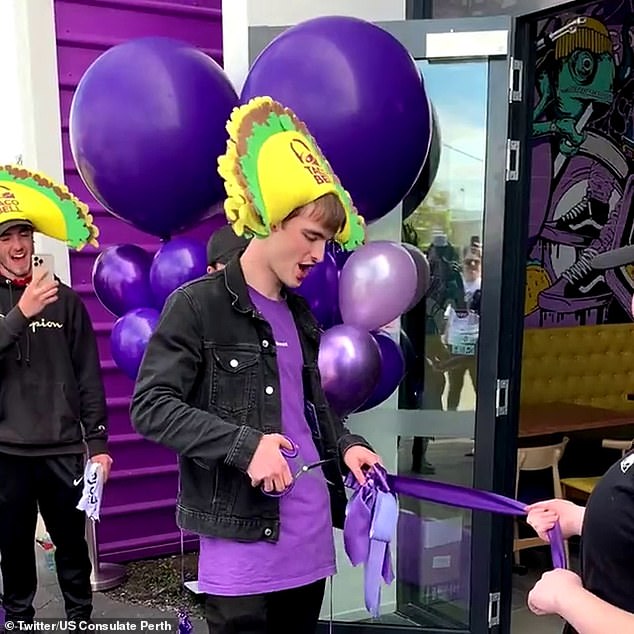 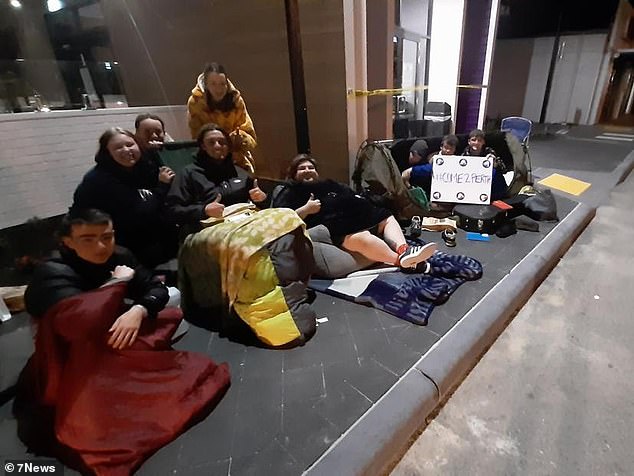 According to a report on the Perth Now website, some people came armed with tents, sleeping bags and beanbags to make their wait for a taco more comfortable.

James Corby, who moved to Perth from America when he was a child had long implored Taco Bell to open an outlet in WA.

His long wait to experience Taco Bell in his adopted home of Western Australia finally came to an end on September 29.

‘It was worth the wait, the long night (queueing),’ he told Perth Now’s Bryce Luff. 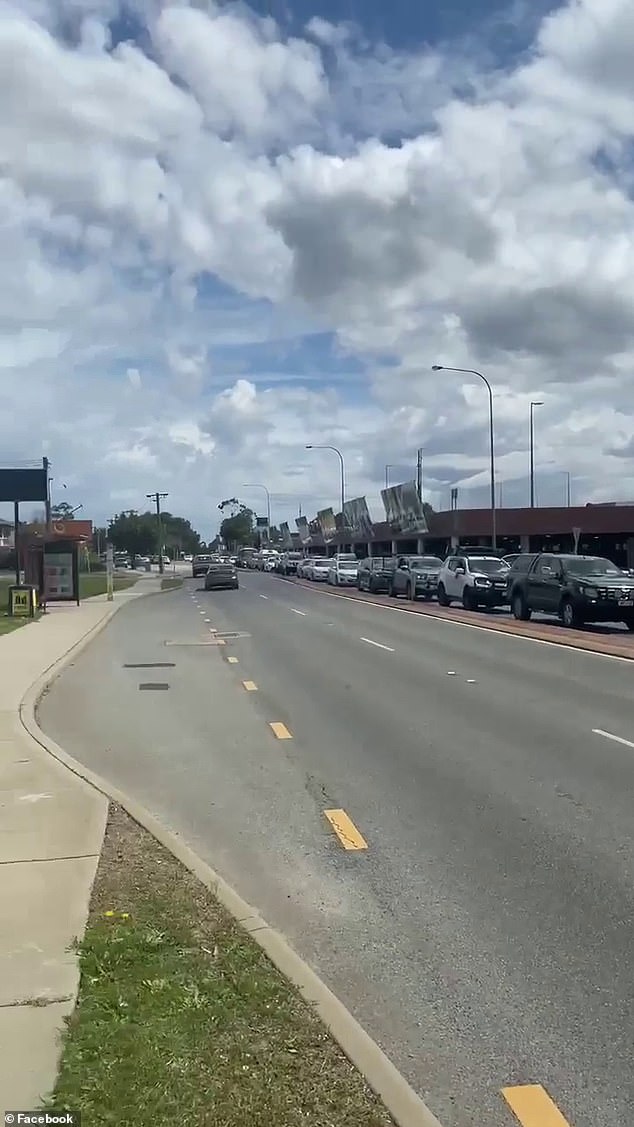 Texas native Ashley Renfro, was close to the front of the line with her three-year-old daughter Georgia Belle when Taco Bell opened.

‘When I heard Taco Bell was coming to Perth I was screaming,’ she said. 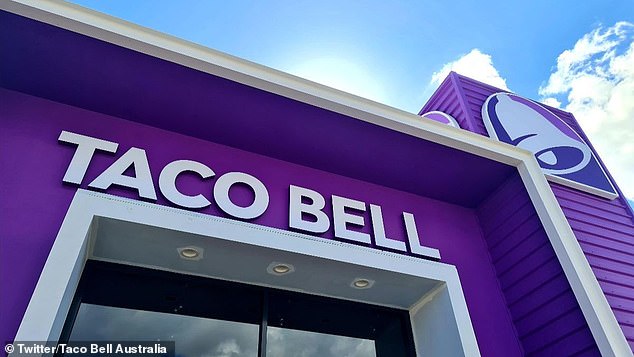 Taco Bell was founded by man called Glen Bell, an entrepreneur who had previously owned a hot dog stand.

Their entry into the WA market will soon be doubled, with a second Perth outlet set to open in 2022 in Ellenbrook, in the city’s northern suburbs.