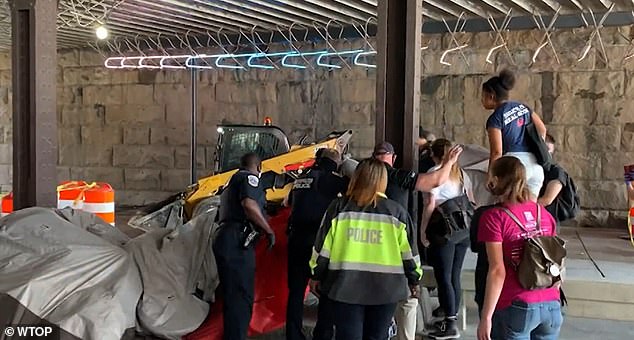 Heavy machinery being used to clear a homeless encampment under an overpass in Washington DC on Monday bulldozed a tent with a homeless man still inside, trapped and screaming.

DC’s Department of Health and Human Services said in a statement that its crews had checked each of the tents for residents, but unbeknownst to them, one remained, and was picked up by a Bobcat front-loader machine they were using to clear the camp.

The homeless man, who was not identified, was taken to a hospital for evaluation, but suffered no visible injuries, officials said.

Witnesses said the machine had been pushing the tents off the sidewalk under an overpass on the city’s L Street when they began to hear screaming from one of the tents. 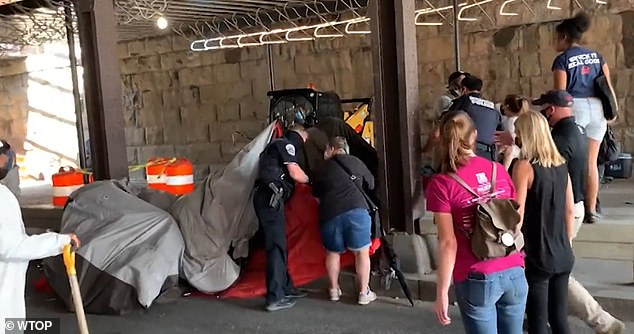 In the moments after, homeless advocates reportedly began rushing over to help the man, leading to a tense encounter with city officials and police on the scene.

‘Across the street, we heard the man yelling, but they didn’t hear him when they were right next to them so we jumped over the things on the sidewalk to get to him,’ Yonce X, one of the advocates on the scene told WTOP.

Some tried to push past police trying to get to the man, and one woman was reportedly dragged away by officers, the station reported. 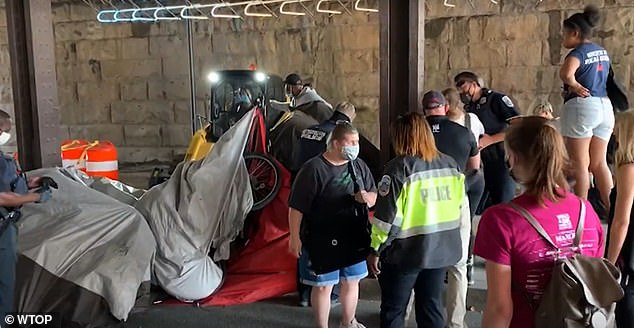 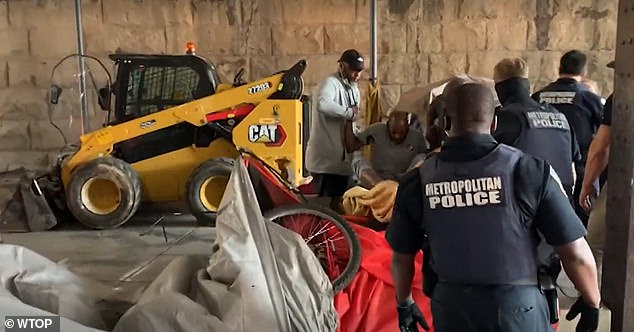 The man did not suffer visible injuries, but was transported to a hospital for evaluation

‘They had to cut a hole to make sure this person was okay and they brought in the fire department who actually got him out,’ Andrew Anderson an advocate with the non-profit People for Fairness Coalition, told WUSA9. ‘They didn’t actually take any time to make sure anyone was in there, they just grabbed the tents and took them out.’

The incident prompted the city to pause its homeless encampment removal for the day, but it resumed on Tuesday, and barricades were placed along the sidewalk to prevent further tents from being set up.

Wayne Turnage, D.C.’s deputy mayor for health and human services, said the incident prompted a change in how the machines were used to clear the sites.

‘There will be a check to make sure there is absolutely nobody in that tent, and then a person will stand there while the Bobcat comes to make sure nobody comes in the tent after the check is made,’ he told WTOP.

‘Whatever the case, we will make sure that it does not happen again,’ he said.

He said the heavy equipment is used to ensure the safety of the crews removing the tents. 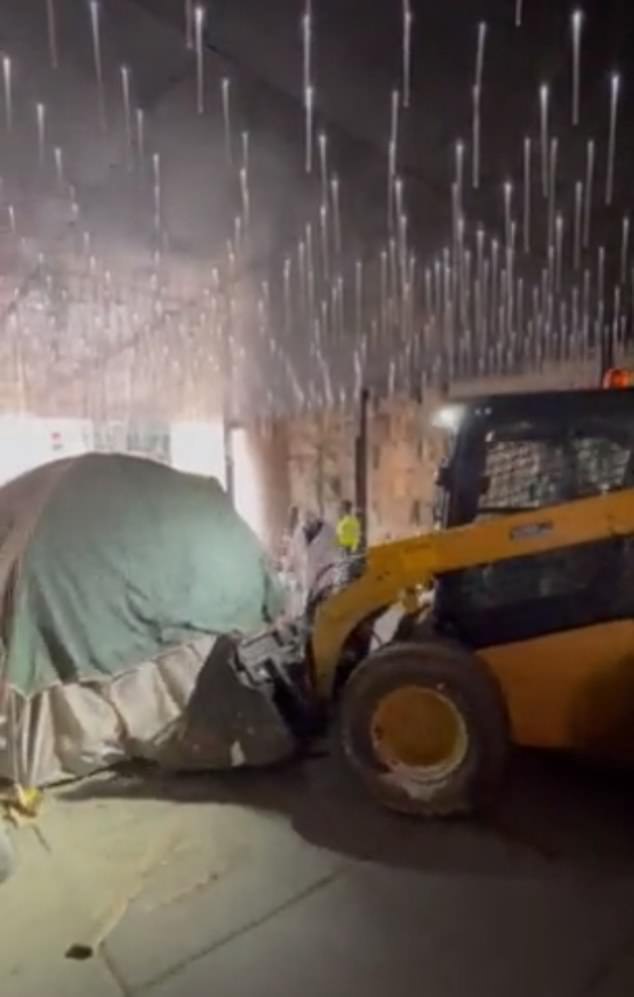 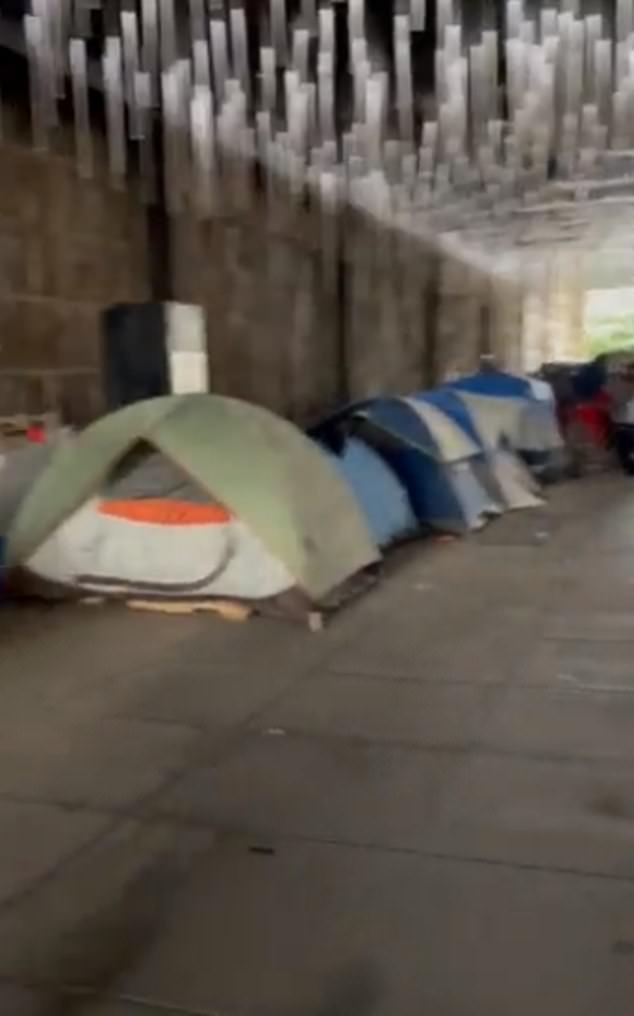 Around 60 people had been living in the camp under the overpass, (pictured) and around 22 were secured housing, the city said

‘A lot of stuff is accumulated; they can be fairly heavy,’ he told the outlet.

The removal of encampments under city’s M and L Street overpasses was the first of three planned under its pilot program to take homeless off the streets and place them in housing, the Washington Post reported.

So far, DHHS officials say 22 of the roughly 60 people living under the overpass have already been given housing, with another eight in the process of moving in the coming days.

Already, however, the project appears in jeopardy, and Monday’s incident prompted further outcry.

‘This is the mayor’s pilot program to help move people in,’ DC City Council member Charles Allen told WTOP, ‘and while it holds some potential, we’ve got to have accountability for every step of the process.’

He called for an end to the use of the heavy machinery while clearing the camps except in cases of biohazards. 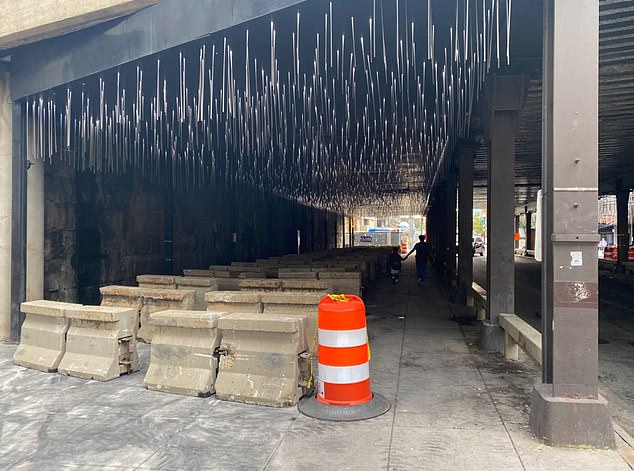 After, concrete barriers were placed on the sidewalk to prevent a return of the tents

Brianne Nadeau, also on the City Council, said the incident prompted further misgivings for her about the project.

Already, 600 people have signed a letter calling for an end to the clearings, especially before every person in the encampments have been provided housing, Axios reported.