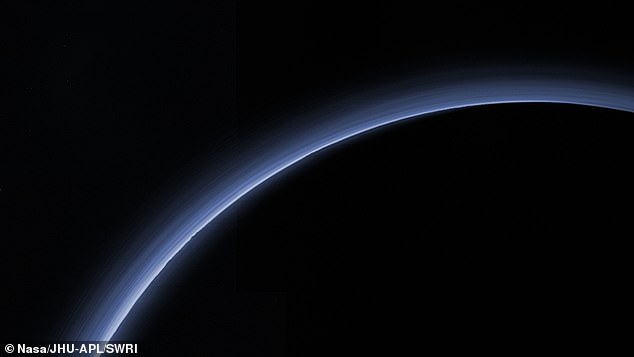 Pluto’s atmosphere is disappearing as the dwarf planet moves further away from the sun, a new study has revealed.

Researchers from Southwest Research Institute in San Antonio deployed telescopes at various sites in the US and Mexico to observe the distant world as it passed in front of a star, briefly backlighting the dwarf planet and revealing its small, nitrogen rich atmosphere.

Their observations suggest that as Pluto moves further from the Sun in its long orbit, it is getting colder and its nitrogen is refreezing to the surface.

The atmosphere of minor planet Pluto is disappearing, according to a new study that found its surrounding nitrogen is refreezing back onto its surface 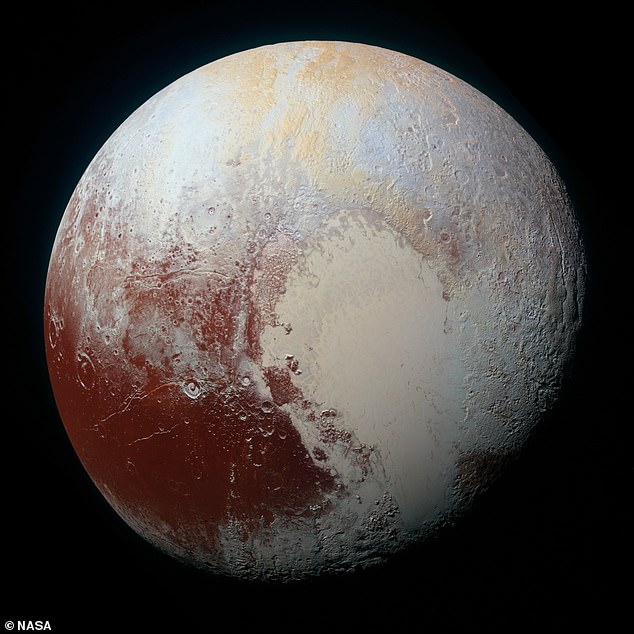 This is happening as the dwarf planet moves farther from the Sun in its orbit, according to a study led by the Southwest Research Institute in San Antonio, Texas 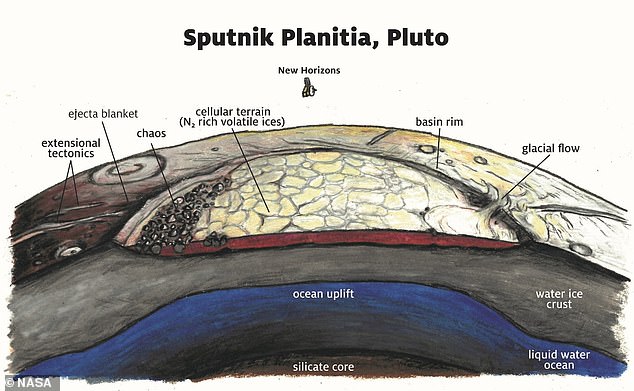 The largest known nitrogen reservoir is Sputnik Planitia, a bright glacier that makes up the western lobe of the heart-shaped Tombaugh Region

WHY IS PLUTO NOT A PLANET?

In 2006, the International Astronomical Union, a global group of astronomy experts, established a definition of a planet that required it to ‘clear’ its orbit, or in other words, be the largest gravitational force in its orbit.

Since Neptune’s gravity influences its neighbouring planet Pluto, and Pluto shares its orbit with frozen gases and objects in the Kuiper belt, that meant Pluto was out of planet status.

Pluto was relegated from its definition as a planet to a dwarf planet, which, despite its name, is not a ‘planet’ as defined by the IAU.

The main difference between ‘dwarf planet’ and ‘planet’ is that the latter does not dominate its region of space.

Before 2006, there was never a formal definition for what constituted a planet.

Scientists argue that this means Pluto’s demotion is unjust and unreasonable.

‘Just so you know, in my view, Pluto is a planet,’ said NASA administrator Jim Bridenstine.

Pluto was discovered in 1930 and is just over a third of the way around the Sun.

The small world is currently moving further from the star, meaning it is getting colder over time.

It is currently 3.7 billion miles from the Sun, and will not complete its first full orbit of our star since its discovery until March 23, 2178.

The astronomers used a technique known as occultation to determine the impact the distance was having on its thin and tenuous atmosphere.

This technique relies on a dark object being backlit by a distant light to reveal previously hidden details.

This includes showing atmosphere density for a distant world like Pluto.

The occultation took about two minutes, during which time the star faded from view as Pluto passed in front of it.

The rate at which the star disappeared and reappeared determined the density profile of Pluto’s atmosphere, the researchers explained.

‘Scientists have used occultations to monitor changes in Pluto’s atmosphere since 1988,’ said Dr Eliot Young, a senior author on this new research.

‘The New Horizons mission obtained an excellent density profile from its 2015 flyby,’ he added.

These findings were consistent with Pluto’s bulk atmosphere doubling every decade.

However, the 2018 observations by the team behind the new study ‘do not show that trend continuing from 2015.’

Several telescopes deployed near the middle of the shadow’s path observed a phenomenon called a ‘central flash,’ caused by Pluto’s atmosphere refracting light into a region at the very centre of the shadow.

When measuring an occultation around an object with an atmosphere, the light dims as it passes through the atmosphere and then gradually returns.

This produces a moderate slope on either end of the U-shaped light curve.

In 2018, refraction by Pluto’s atmosphere created a central flash near the centre of its shadow, turning it into a W-shaped curve. 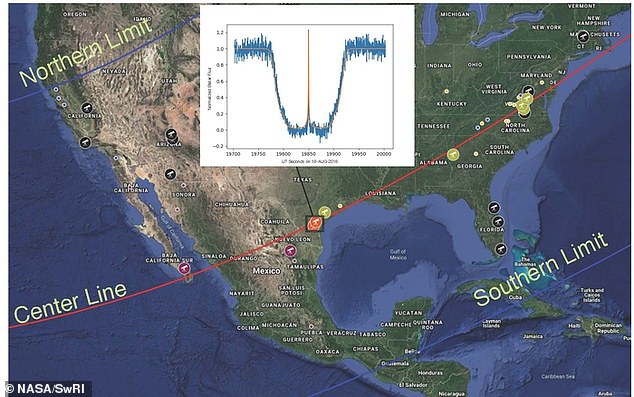 In 2018, refraction by Pluto’s atmosphere created a central flash near the centre of its shadow, turning it into a W-shaped curve 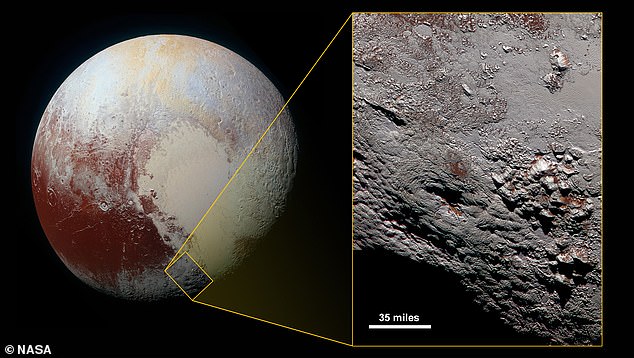 Pluto was discovered in 1930 and with a 248 year orbit, is just over a third of the way around the Sun

When Pluto passed in front of a star on the night of August 15, 2018, astronomers measured the abundance of Pluto’s atmosphere.

This was possible as it was briefly backlit by the well-placed star.

The occultation took about two minutes, during which time the star faded from view as Pluto’s atmosphere and solid body passed in front of it.

The rate at which the star disappeared and reappeared determined the density profile of Pluto’s atmosphere.

The data indicated that the surface pressure on Pluto is decreasing and that its nitrogen atmosphere is condensing.

It is forming ice on its surface as the object moves away from the Sun, with nitrogen from the atmosphere.

‘The central flash seen in 2018 was by far the strongest that anyone has ever seen in a Pluto occultation,’ Dr Young said.

He added that ‘the central flash gives us very accurate knowledge of Pluto’s shadow path on the Earth.’

However, unlike our planet, Pluto’s atmosphere is supported by the vapour pressure of its surface ices.

This means that small changes in surface ice temperatures result in large changes in the bulk density of its atmosphere.

For the past quarter century, Pluto has been receiving less and less sunlight as it moves further away from the Sun.

But, until 2018, its surface pressure and atmospheric density continued to increase.

Scientists attributed this to a phenomenon known as thermal inertia.

‘An analogy to this is the way the Sun heats up sand on a beach,’ explained Dr Young.

‘Sunlight is most intense at high noon, but the sand then continues soaking up the heat over course of the afternoon, so it is hottest in late afternoon.

‘The continued persistence of Pluto’s atmosphere suggests that nitrogen ice reservoirs on Pluto’s surface were kept warm by stored heat under the surface.

‘The new data suggests they are starting to cool.’ 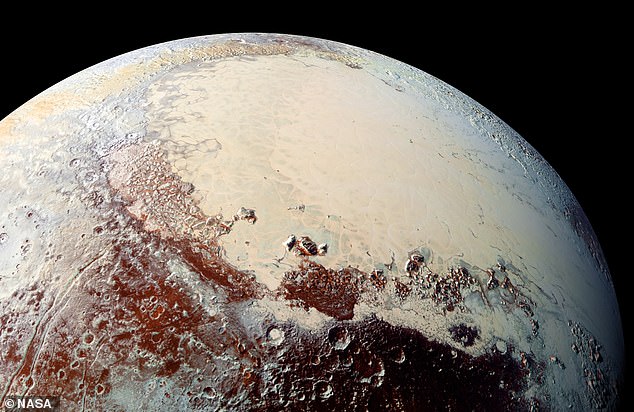 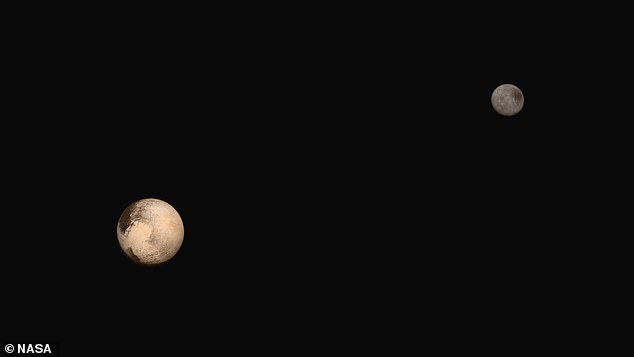 For the past quarter century, Pluto has been receiving less and less sunlight as it moves farther away from the Sun. Pluto is here in the foreground, with moon Charon in the background

The largest known nitrogen reservoir is Sputnik Planitia, a bright glacier that makes up the western lobe of the heart-shaped Tombaugh Region.

The data will help atmospheric modellers improve their understanding of Pluto’s subsurface layers, particularly regarding compositions that are compatible with the observed limits on heat transfer.

The findings were presented at the American Astronomical Society Division for Planetary Sciences Annual Meeting on October 4.

Pluto has a vast ocean beneath its frozen crust that has been there for 4.5 billion years and could be harbouring alien life, study shows

Pluto harbours a vast ocean beneath its frozen crust that has been there for 4.5 billion years – 500 million years longer than Earth’s seas – a study has found.

Pluto is known today as a ball of frozen ice and rock orbiting the sun at a distance of 3.7 billion miles.

But a new study suggests that it may have been hot when it first formed, allowing liquid water to form on its surface and potentially providing the conditions needed to support alien life.

This differs from the traditional view that it originated as a ball of frozen ice and rock, which gradually melted enough to form a subsurface ocean due to heat released by the decay of radioactive elements in the rock.

Scientists compared thermal model simulations of the evolution of its interior to pictures of its surface taken by NASA‘s New Horizons spacecraft.

They identified ridges and troughs more than a mile deep on the dwarf planet, suggesting stresses from movements inside its shell caused by water expanding when it freezes.

The study suggests other planets and dwarf planets in the Kuiper Belt – like Haumea and Makemake – may have also once been warm and capable of harbouring alien life.