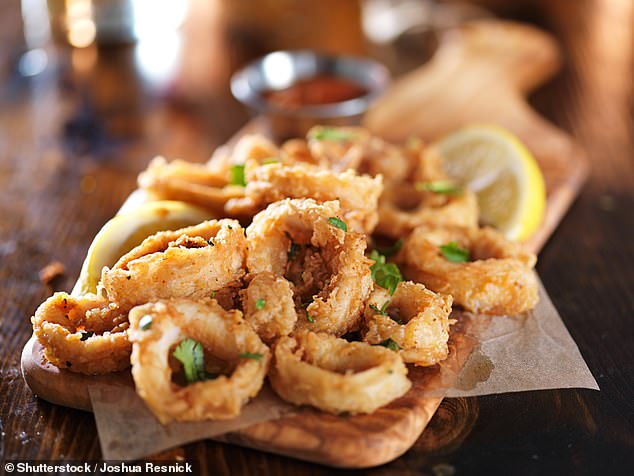 Say no to calamari! Shoppers are urged to avoid eating UK-caught squid as the species is added to the ‘red list’ of seafood

By Xantha Leatham For The Daily Mail


As the nation is gripped by Netflix hit Squid Game, Britain’s diners are faced with squid shame.

Diners have been told to avoid eating UK-caught squid after it was added to a ‘red list’ of seafood.

The Marine Conservation Society has released an updated version of their Good Fish Guide, a directory for sourcing ocean-friendly seafood.

They are either rated green, amber or red, indicating they are ‘best choice’, seafood that ‘needs improvement’ or ‘fish to avoid’.

Some new species added to the guide went straight on the red list, including UK-caught squid.

‘Squid caught in the UK have been added to the red list as there is no management in place to help protect them, and scientists don’t have figures on how many of them are actually living in our waters, so we don’t know how many are sustainable to catch,’ said Charlotte Coombes, Good Fish Guide Manager.

‘The data that they do have suggests that populations might be on the decline in several areas.’

If you’re try to be more sustainable, the Marine Conservation Society advises you eat:

Ratings for other species such as coley – sometimes used as a substitute for cod and haddock – and prawns from the North Sea also worsened.

Most UK lobster and crab species are classed as amber due to lack of management and no quotas.

Meanwhile there are mixed ratings for cod – one of the most popular British fish.

All cod populations in UK seas are at low levels, and most are declining further. North Sea cod remains on the red list as the charity warns warming waters are likely to be contributing to their low numbers.

The charity also warned of bycatch – animals caught by accident – in a lot of fisheries. These include porpoises, sharks and seabirds in southwest UK.

Ms Coombe, said: ‘The latest ratings update for the Good Fish Guide really highlights the impact of poorly managed fisheries on the state of our seas, with so many new ratings going straight onto our Fish to Avoid list. 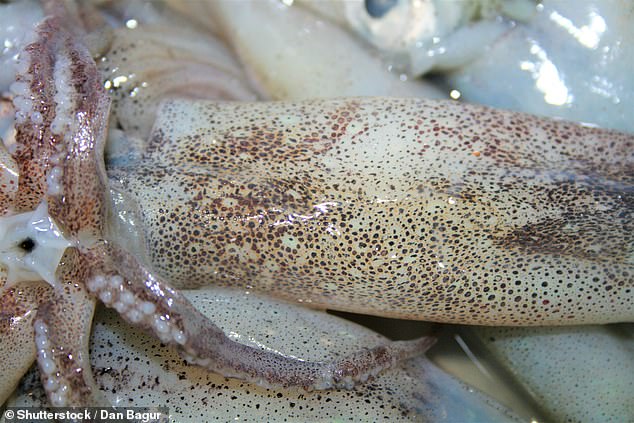 Some new species added to the guide went straight on the red list, including UK-caught squid (pictured)

Cod and haddock face threats too

Overfishing has decimated cod and haddock stocks a number of times.

Most recently, haddock from three North Sea and west of Scotland fisheries were removed from sustainable seafood lists because stocks had fallen below acceptable levels in 2017.

During the 1990s, Newfoundland in Canada was forced to ban cod fishing because stocks were nearly wiped out.

While rising sea temperatures reduces the size of cod and haddock, it also forces the fish further north in search of cooler waters.

‘However, there are glimmers of hope, with 20 ratings improving in the latest update, showing that where good management exists, we can recover our seas.’

The charity is calling for management plans to be put in place in fisheries across the UK for all commercially caught species, with the likes of cod, herring and squid given ‘urgent attention’.

They point to European Hake – which used to be red-rated – as an example of how management techniques can turn around species’ fortunes.

Stocks have since recovered, and hake fisheries now deploy nets with ‘pingers’ to deter porpoises from the area.

As a result, the species is now classed as green on the list.

Gareth Cunningham, head of fisheries and aquaculture at the Marine Conservation Society, said: ‘There are clear opportunities to improve UK fisheries.

‘Through adoption of fully documented fisheries and Fisheries Management Plans, UK seafood could be made sustainable for many years to come.

‘Our ratings provide yet more evidence that the UK Governments must act now, or risk tipping the balance too far.’