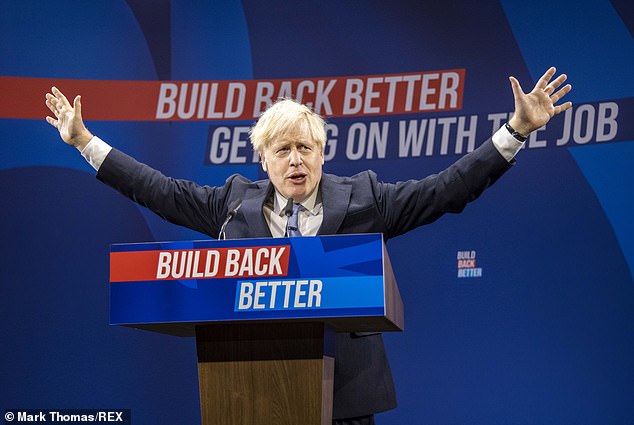 ‘Levelling Up’ wages will take TEN YEARS, ministers admit – and ‘competitive’ Boris wants to stay in power longer than Thatcher to see it through


Ministers have admitted that ‘Levelling Up’ wages will take 10 years – and Boris Johnson wants to stay in power longer than Margaret Thatcher to see it through.

The PM has staked his political career on reforming the economy after Brexit, insisting in his conference speech yesterday that there is ‘no alternative’.

But Cabinet allies have told MailOnline that Mr Johnson knows the process will be ‘bumpy’ and he needs to dig in for the ‘long haul’. They said he is so ‘competitive’ he knows ‘to the minute’ how long he needs to stay in office to be the longest-serving modern Tory premier.

Senior figures said to ‘bet your house’ on the next election being the latest realistic date of May 2024, because there might be few signs of progress to highlight to voters before that.

They predicted that Mr Johnson will need to cut taxes in the run-up to the poll in order to make sure he gets another solid majority.

However, there is also anxiety at the Conservatives’ reliance on the PM’s personal popularity. One top minister said the party would be ‘in trouble’ if he went ‘under a bus’ because Chancellor Rishi Sunak does not have the same appeal in Red Wall communities.

Boris Johnson has staked his political career on reforming the economy after Brexit, insisting in his conference speech yesterday that there is ‘no alternative’. 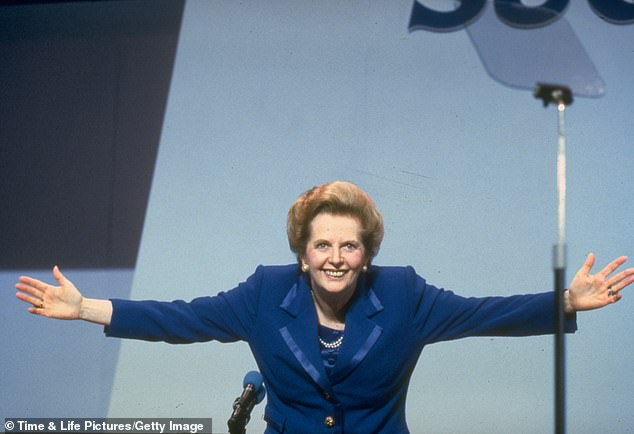 Mr Johnson received a mix reception for his first big speech to Tory conference since winning an historic majority in 2019.

Businesses warned that he has failed to give any details of how his ‘Level Up’ vision will work, accusing him of demanding they soak up massive cost rises without any help.

There is also growing alarm at threat of ‘stagflation’, as soaring energy prices and supply chain chaos push up inflation while economic growth appears to be stalling.

One Cabinet member said there will be ‘pain’ as the country is weaned off cheap immigrant labour and the fortunes of left-behind communities are turned around.

‘It will will take 10 years and there will be some pain along the way, particularly in the early part,’ they said.

‘A lot of it depends on building infrastructure – roads and railways and so on – and it takes time to complete and time for people to feel the benefit.’

Another said: ‘It’s going to be bumpy, Boris might need to rub some soothing balm on the voters.’

Despite persistent speculation that Mr Johnson will walk away from government to make more money in the private sector, ministers insisted Mr Johnson was determined to stay.

‘Apart from anything else, he’s very competitive,’ one said. ‘He’ll know down to the day, the hour and the minute when he will overtake David Cameron or Margaret Thatcher. He is in it for the long term.’

Lady Thatcher was PM for over 11 years, meaning that Mr Johnson would need to win two more elections to beat her record. 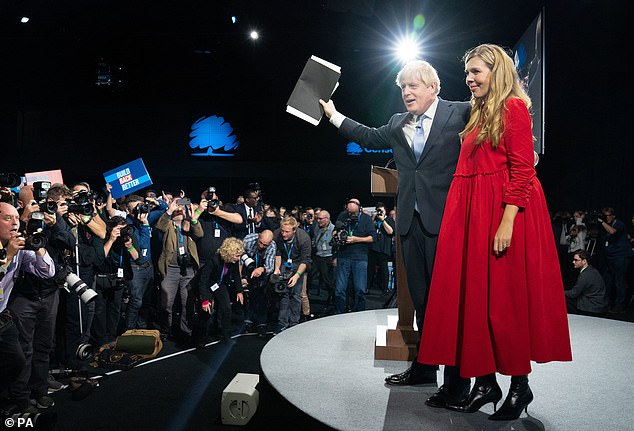 Senior ministers said to ‘bet your house’ on the next election being the latest realistic date of May 2024. Pictured, Mr Johnson and wife Carrie at Tory conference yesterday

A Cabinet minister said they ‘hate’ the huge tax rises being brought in to bail out the NHS and social care.

But they suggested Mr Johnson will need to ease the burden before he asks for another mandate from voters.

‘It’s the normal pattern that there are tax cuts before elections, and this time round we will want to give a thank you to voters for bearing with everything,’ they said.

Senior ministers see the possibility of Mr Johnson exiting as the biggest threat to the overall project.

One described Mr Sunak as ‘still very much a work in progress’ – suggesting that he does not resonate with Red Wall voters in the same way as the PM.

‘There are faces for the future, but if Boris went under a bus tomorrow, we’d be in trouble,’ said the minister. ‘There’s no-one else who can reach the voters he does.’