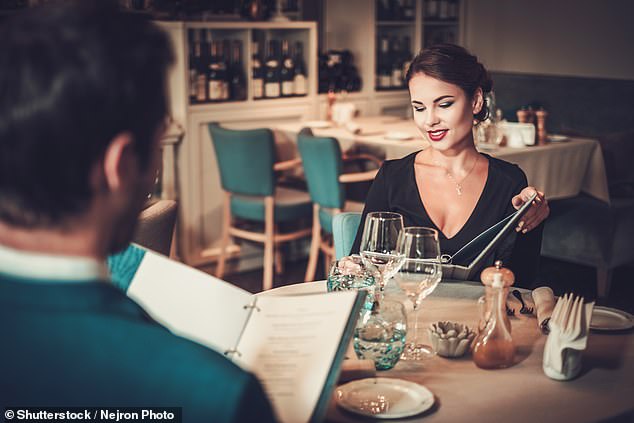 
People have shared the hilariously pretentious things they’ve come across in a cutting online thread.

Mumsnet users from across the UK took to the forum to dish the dirt on the toe-curling habits of snobs, including someone who was embarrassed to be seen shopping at Tesco.

The discussion began after a user told how she once witnessed a woman and self-described ‘food snob’ take a ‘two foot’ wooden salt and pepper mill out of her bag during lunch at university.

Other responses to the thread shared stories of parents bragging about their children’s interests and drivers who refuse courtesy cars that aren’t as expensive as their own.

Mumsnet users from across the UK took to the forum to dish the dirt on the toe-curling habits of snobs, including someone who was embarrassed to be seen shopping at Tesco

Posting on Mumsnet, the user told how she had gone to university with a woman who enjoyed name dropping and brought her own salt and pepper mill to lunch

One person wrote: ‘An ex colleague who said if she HAD to go in to Tesco she’d hide if she saw anyone she knew as she thought Tesco was down market compared to Waitrose and she didn’t want anyone to see her shopping there.

‘Never mind that anyone of her ‘class’ she saw also shopping there! Also my sister-in-law won’t drive anything other than a BMW, Merc or Audi because her DD goes to a private school (that my sister-in-law/brother-in-law can’t really afford) and she wants to appear wealthy although she’d never say it out loud. If I pick up their daughter in my old banger nobody give me 2nd glance.’

Another wrote: ‘Complaining that the garage had given her a Mercedes saloon as a courtesy car when her children were used to an SUV. And yes she insisted they swap it. A relative so determined to show off his new, gold curb bracelet that he wore it over the cuff of his jumper so it could be seen at all times.’

Others contributed amusing stories about the behaviour of pretentious parents, with one writing: ‘I was in a waiting room once with my daughter, she was there with her Peppa Pig shoes on playing with the toys.

People delighted in sharing their hilarious examples, including one man who thought his garden was simply ‘too big’

‘Another mum came in with her child, he was about three or four and he went off to play with my daughter.

‘The mum then said “Oh, Peppa Pig shoes, does your daughter like Peppa Pig”, I replied that she loved it.

‘She then said ‘Oh wow how did you manage to get her to like that, my son simply refuses to watch anything except David Attenborough documentaries, I wish he would dumb down and watch cartoons sometimes’. It was so pretentious it was funny.’

Another said: ‘A school mum was telling me how her DD got to choose to do whatever she wanted for her 3rd birthday. She chose a trip up the Shard, sashimi for lunch and a night at the Shard Shangri la hotel.

‘That’s what I dream of doing for my 50th one day! But the way the economy is going, at this rate it’ll be a Premier Inn & pub lunch!’

A third wrote: ‘My DS goes to quite a middle class comp. He has a friend, nice kid, who moans whenever mummy can’t get to M&S and he has to made do with Waitrose cakes in his lunchbox. Poor lamb!’

‘My mum used to refer to her very expensive car as ‘The Lexus’ and not just ‘the car’ like everyone else,’ a third added.