Leigh-Anne, 30, also claimed that she and her bandmates didn’t unfollow the star on Instagram as has been widely reported but were instead blocked by Jesy.

She is said to have made the statements in messages to influencer NoHun – who shared the exchange on his Instagram Story.

The leaked messages show Leigh-Anne replying to NoHun’s poll, asking whether he should create a dance routine to Jesy’s debut solo single Boyz, which was released on Friday.

Leigh-Anne appeared to respond telling him ‘no’, leading to a shocked No Hun replying: ‘Omg Leigh-Anne I thought you were all okay. Wtf (sic).’

Leigh-Anne then continued: ‘Do a video about her being a blackfish instead… She blocked us. Cut us off.’

A second slew of messages saw Leigh-Anne insist that ‘no one knows anything’ when it comes to the fallout and that she was ‘raging’.

The claims that Jesy blocked her bandmates on social media come following reports that Leigh-Anne, Perrie Edwards and Jade Thirlwall had unfollowed Jesy on social media a day after she dropped her first single Boyz, featuring rappers Nicki Minaj and Diddy. 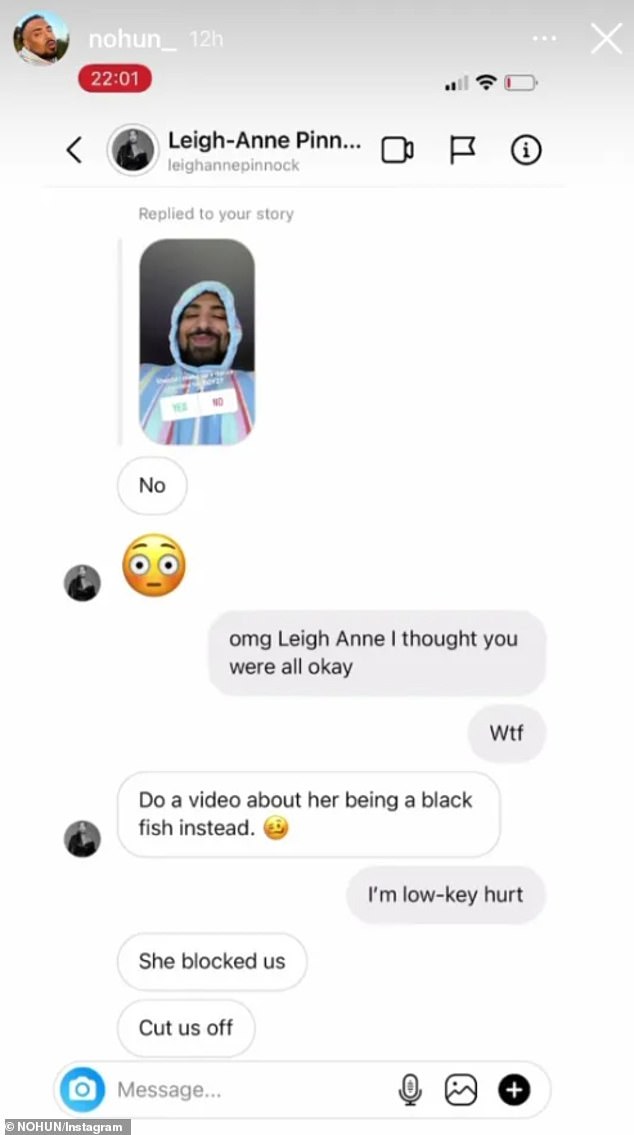 Speaking out: The leaked messages show Leigh-Anne replying to NoHun’s poll, asking whether he should create a dance routine to Jesy’s debut solo single Boyz, released on Friday 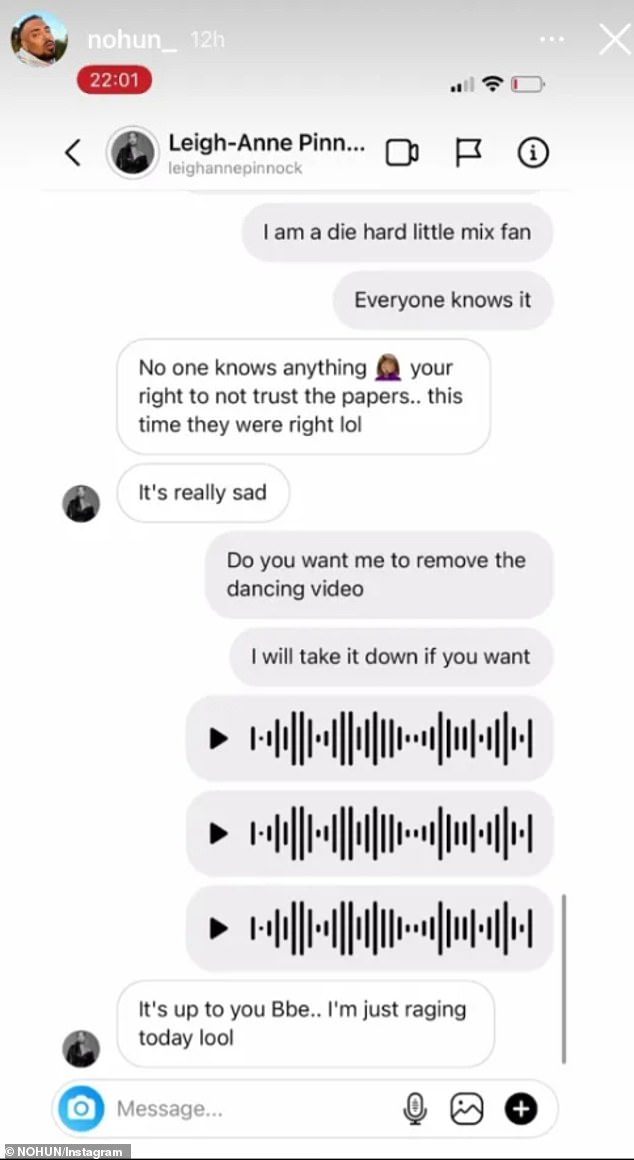 Raging: A second slew of messages saw Leigh-Anne insist that ‘no one knows anything’ when it comes to the fallout and that she was ‘raging’

NoHun has since deleted the exchange from Instagram, but shared a TikTok video in which he accused Leigh-Anne of asking him to do the band’s ‘dirty work’ with her request that he make a video about blackfishing.

He said: ‘I don’t think it’s appropriate for a member of Little Mix to message me after I posted a video dancing to the new Jesy Nelson song, saying that I should make a video about her being a blackfish instead.

‘So you want me to create content that you know is going to incite hatred and bullying to a person who has been so open and honest and vocal about how trolling has affected their mental health?’ 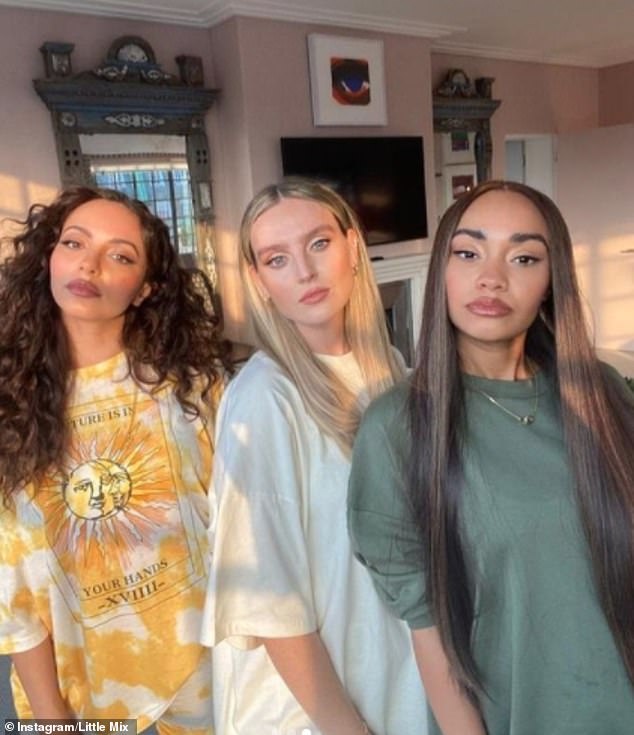 Feuding? The exchange has surfaced following reports the Little Mix girls had unfollowed Jesy a day after she released her debut single (pictured above Jade, Perrie and Leigh-Anne) 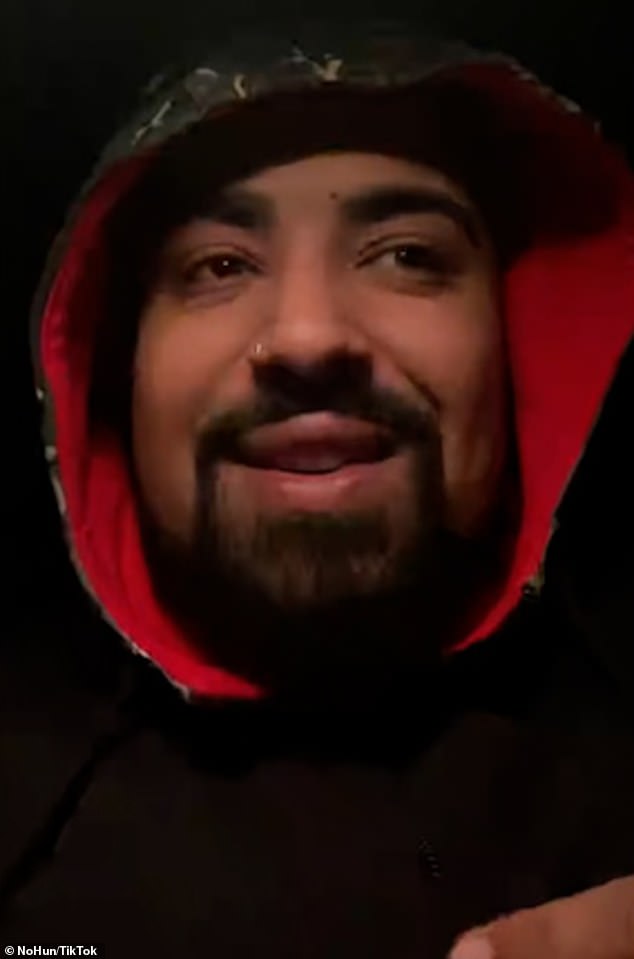 Leaked: Influencer NoHun (pictured) shared a slew of messages that he claims were between himself and Leigh-Anne before blasting the star for asking him to do her ‘dirty work’ and make a video about blackfishing

Jesy spoke out about allegations of blackfishing after she came under fire for the music single for her song Boyz.

The video is a remake of Diddy’s 2001 video Bad Boy For Life, which she samples in her new track.

In a recent interview with Vulture, Jesy claimed that she was never targeted with ‘blackfishing’ claims while she was in Little Mix and has only faced such criticism following her departure from the girlband.

‘I’m very aware that I’m a white British woman; I’ve never said that I wasn’t,’ she said, defended herself from the accusations. 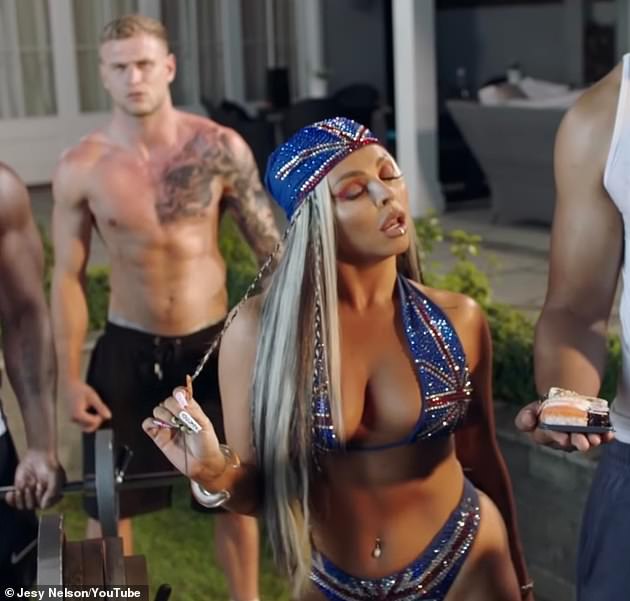 New release: Jesy’s new single is a remake of Diddy’s 2001 video Bad Boy For Life, which she samples in her new track – but she has been accused of blackfishing 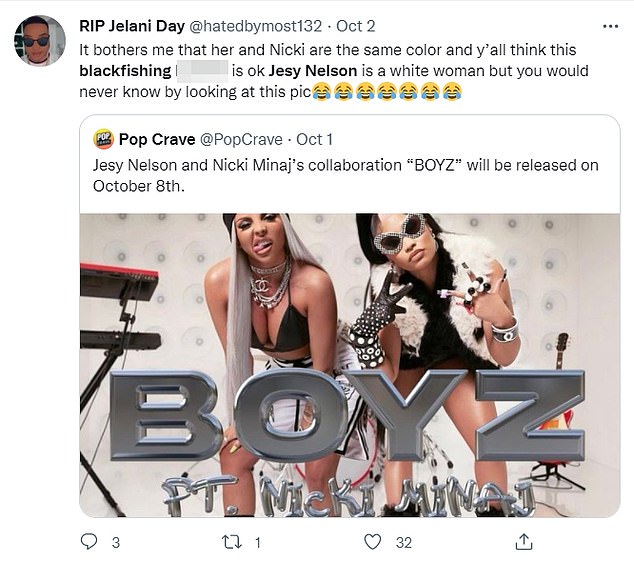 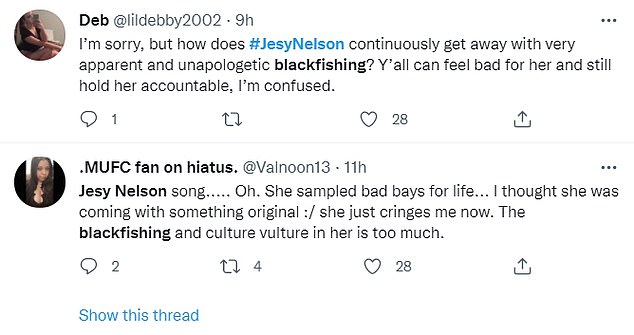 Angry: A plethora of fans have taken to Twitter in a bid to make their Blackfishing claims heard

A newly coined phrase in 2018, ‘blackfishing’ describes someone who pretends to be black on social media for social or financial gain – using make-up, hairstyles, or even surgery to alter their appearance and adopt characteristics typically associated with women of colour. 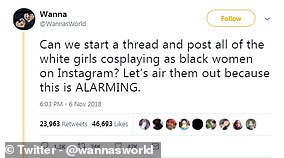 The term came to prominence after a post calling out the ‘alarming’ amount of ‘white girls cosplaying as black women on Instagram’ was liked nearly 50,000 times on Twitter.

It prompted users to flood the thread with before and after snaps revealing drastic changes to certain influencers’ appearance.

When quizzed about claims that some of her Instagram followers were blocked by her account after commenting that she appeared to be Blackfishing, Jesy said it may have been a member of her team.

The Power hitmaker later added that her management team have deleted comments and blocked users in the past, following years of trolling online.

‘I take all those comments made seriously. I would never intentionally do anything to make myself look racially ambiguous, so that’s why I was initially shocked that the term was directed at me,’ Jesy’s publicist told the publication. 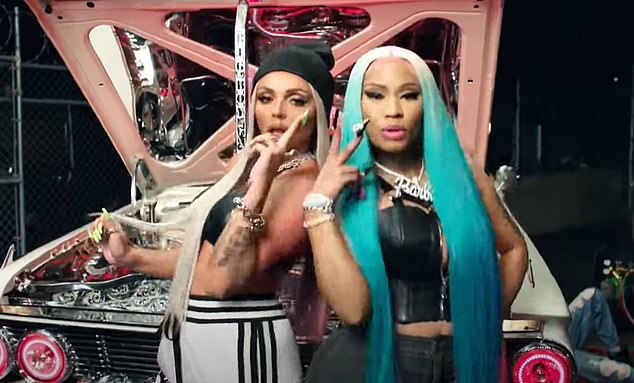 Controversial: Following its release, Jesy found herself being accused of ‘blackfishing’ – something she has previously denied and defended herself against

Following the release of Jesy’s single, her former bandmates didn’t appear to acknowledge the release and were instead seen promoting their own new music, as they pushed a limited signed edition of their own record Between Us on social media.

While Jesy has opened up about the lack of contact she has had with the band since leaving, the rest of the girls have remained tight-lipped over her departure.

Speaking to Glamour magazine, she claimed: ‘I haven’t spoken to the girls. It is weird because for so many years we were as close as sisters, together every hour of the day for weeks, sharing beds, laughing, crying just 24/7 the four of us together and then… Nothing.’

Jesy announced her departure from the group one year after filming a BBC documentary Jesy Nelson: Odd One Out, in which she revealed she had attempted to take her own life after years of relentless trolling and abuse. 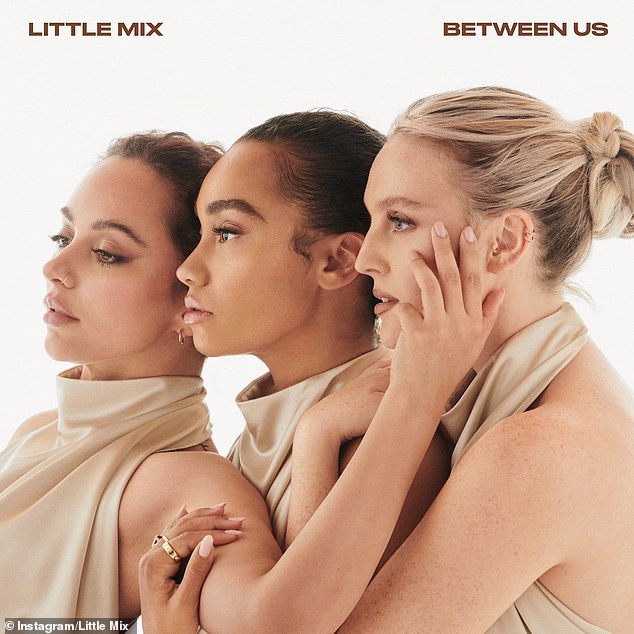 Shunned? Little Mix didn’t appear to acknowledge Jesy’s single and were instead seen promoting a limited edition of their own record Between Us

In August, Leigh-Anne welcomed twins with her footballer boyfriend Andre Gray while five days later, Perrie introduced her baby son Axel to the road with her partner, footballer Alex Oxlade-Chamberlain.

When asked if she had seen the tots, she said: ‘No. I’ve sent a few texts, but that’s it. I can’t explain it, it’s like there has to be this distance…

‘We were so close so you can’t do in-between, there has to be space and hopefully… Hopefully at some point in the future we can all come back together. I love them. They are my sisters in so many ways, but for the time being we just don’t talk.’

Jesy explained that the pressure of being compared to ‘these three naturally gorgeous, super teeny-tiny girls’ was crippling. 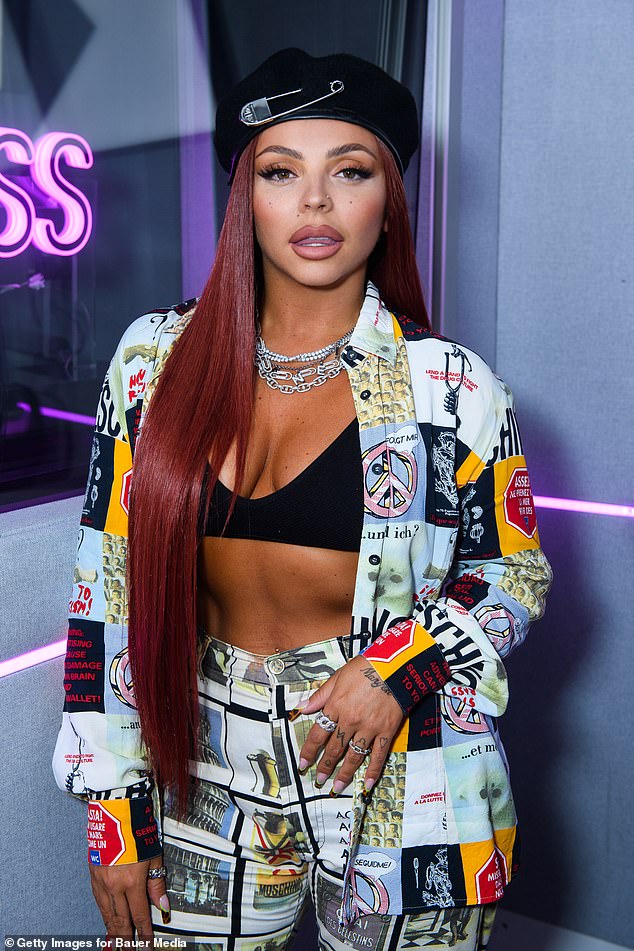 No contact: Jesy revealed in an interview with Glamour that she hasn’t spoken to her former bandmates despite being ‘as close as sisters’

On dealing with being around the other girls, Jesy recently told Fearne Cotton’s podcast on her Happy Place podcast: ‘To be compared every single day to three other girls was draining, and I couldn’t deal with that anymore…

‘And I think a lot of people have misconstrued what I meant in my statement, they’re like oh, so now she’s going solo. I never said in my statement, I’m coming out of the music industry, I’m not going to do music anymore…

‘I said, I’m just going to start a new chapter of my life, I just want to make myself happy. I don’t know what that’s going to be, but I need to look after myself now, make myself feel better again.’ 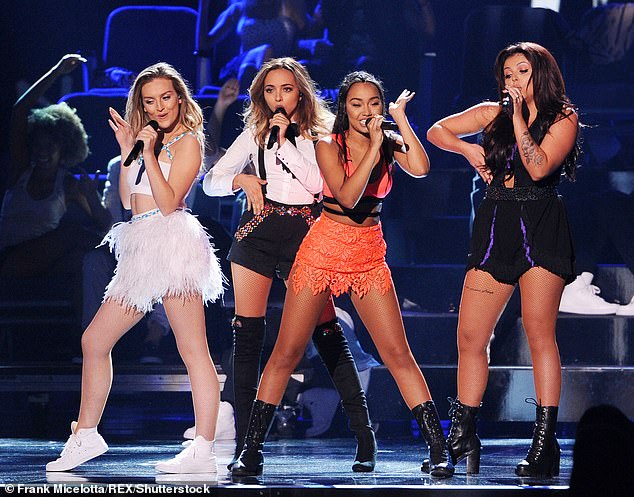 Moving on: Jesy announced her decision to quit Little Mix in December 2020 and told fans she was focusing on her mental health (pictured above with Perrie, Jade and Leigh-Anne in 2015)