Thomas, 22, scorched her competitors in Atlanta with a 4 minutes 33:24 second race – much to the chagrin of some of her teammates, and to those in the stands, who remained silent as she won.

‘I try to ignore it as much as I can, I try to focus on my swimming what I need to do to get ready for my races and I just try to block out everything else,’ said Thomas after the race, when asked by ESPN about the response.

‘It means the world to be here, to be with two of my best friend and teammates and be able to compete.’

The Texan, who swam for three years on the university’s men’s team before transitioning in 2019, is now the first transgender athlete to win a NCAA championship – a distinction one of Thomas’ teammates said would be dubious if achieved.

Lia Thomas, 22, is seen immediately after her historic victory – which was greeted with silence by the crowd Parents and attendees in the crowd visibly upset saying this was not a fair competition. pic.twitter.com/vpD5cY1z2M 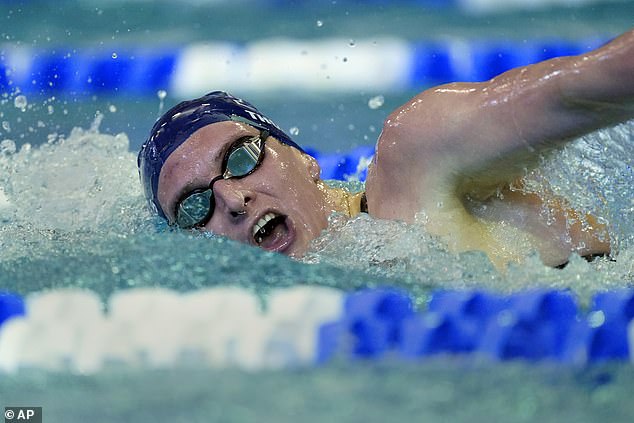 Lia Thomas is seen swimming for the University of Pennsylvania on Thursday, at the NCAA championships in Atlanta, Georgia. She has become the first transgender athlete to win a NCAA final Thomas, 22, is seen ahead of her heat on Thursday, which she also won – making her top seed for the final

Martina Navratilova, hours before the historic feat, called for Thomas to have an asterisk by her name when she wins women’s races, arguing that racing against biological females is unfair and should be noted.

Navratilova, widely considered to be among the world’s greatest ever tennis players, spoke out as Thomas won her 500 yard freestyle final at the ships in Georgia – becoming the first transgender athlete to become NCAA champion.

Navratilova told News Nation on Thursday that the current rules, permitting Thomas to compete as a woman because she has completed the required year of testosterone-reduction treatment, were wrong.

‘It’s not about excluding transgender women from winning ever,’ the 65-year-old said.

‘But it is about not allowing them to win when they were not anywhere near winning as men.’ Navratilova, one of the first openly gay sportswomen, blazed a trail in the 1970s and 80s, but said Thomas’s situation was wrong.

‘You try to keep it as close as possible to what it would had been, were you born in the female biological body in the first place,’ she said.

‘And even saying that, people take exception to – biological female. People don’t even want to use those words.

‘I don’t know what else to say. Other than that.’

Navratilova suggested that transgender women be treated separately from those born female.

‘But the solution perhaps for now is to swim in a lane; you can compete but you don’t get the medal,’ she said.

‘Maybe put an asterisk there.’

Navratilova said significant questions would be raised if Thomas, who is approaching her sporting peak, continues to dominate the sport after college.

‘If she starts breaking records left and right, Lia goes to the Olympics, hmm…

‘Because she is hitting her prime now, physically.

‘And in the future maybe there should be an open category for everyone, and then for biological females.

‘So trans women can compete, but they’ll compete against men.

‘And trans men have a choice.’

Lia Thomas started taking hormone therapy while she was still competing as a male back in May 2019.

Under USA Swimming rules, athletes had to have recorded low levels of testosterone for 36 months to compete in the female category.

That meant that Thomas didn’t qualify for the NCAA championship, if they followed USA Swimming rules – as they originally said they would.

But the NCAA said that she would be allowed to compete because they were refusing to adopt the threshold this year.

Last month, the NCAA committee said: ‘The subcommittee decided implementing additional changes at this time could have unfair and potentially detrimental impacts on schools and student-athletes intending to compete in 2022 NCAA women’s swimming championships.’

It is unclear what they will do next year, however.