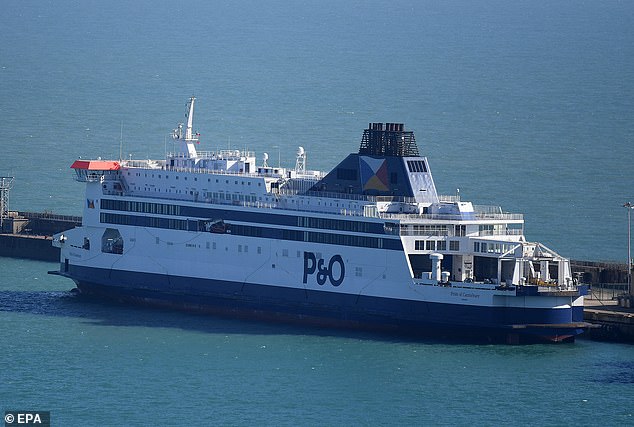 Keir Starmer’s Labour is hyperventilating over the ‘scandalous’ decision of P&O Ferries to sack 800 crew and replace them with less expensive agency colleagues.

Before Labour becomes too hot under the collar, it should consider some history.

The maritime heritage of P&O dates back to 1837. But in 2006, Tony Blair and Gordon Brown stood on the sidelines when P&O Ports was sold to UAE-based Dubai Ports World for £5billion in a debt fuelled deal which would later go badly wrong.

On the rocks: In 2006 Tony Blair and Gordon Brown stood on the sidelines when P&O Ports was sold to UAE based Dubai Ports World for £5bn in a debt fuelled deal

It was obvious that Britain, with its distinguished naval traditions, was making a big strategic error in selling vital national and global infrastructure.

P&O Ports, the owner of the ferry company, was vital to the domestic economy. Under the leadership of Lord Sterling it had built up a global network of ports running from the sub-Continent to West Africa.

The UK’s role as an entrepot provided support to our service economy of insurance and trade finance in fast growing regions of the world. Had the UK retained command and control, it could have been a vital part of Boris Johnson’s post-Brexit global ambitions.

The most remarkable aspect of the transaction was that the US, Britain’s most significant trading and strategic partner, wanted no part of it.

Then Senator of New York, Hillary Clinton, fought a fierce battle against six P&O ports, mainly on the Eastern Seaboard of the US, being sold to DP World.

The American part of the deal was blocked by George W Bush’s White House, which didn’t want critical ports falling into Gulf hands when they could potentially be a national and economic security threat.

Paradoxically, the most red in tooth and claw capitalist nation on earth was unwilling to sell, but Labour saw no reasons to intervene even though it could have invoked Gordon Brown’s Enterprise Act 2002 on national security grounds.

What is indisputable is that under its pre-DP World ownership, with a powerful board and a full London listing, P&O would never have even attempted a flawed and immoral approach to cut its wages bill.

The National Union of Rail, Maritime and Transport Workers (RMT) may be one of the most militant unions in Britain as commuters have learned to their cost over the years.

The merchant seamen part of the union has always been uncompromising. None of this is justification for running roughshod over Britain’s flexible labour laws.

The UK is not the UAE, largely run with the assistance of cheap labour from nearby India and Pakistan.

There are much broader lessons from this episode. Some have sought to make comparisons between DP World’s clash with the RMT and late president Ronald Reagan’s battle with air traffic controllers.

The latter was taking industrial action when confronted by the White House, and safety in US skies was compromised.

What the current incident does show is the utter folly of the noughties, when New Labour allowed great chunks of our national infrastructure to fall into grasping overseas hands including our main airports.

After the betrayal of P&O, other port companies, including Associated British Ports and Forth Ports, were swallowed by overseas consortia.

Only now is the Tory government recognising the importance of trade infrastructure with the creation of free ports – a favourite of Chancellor Rishi Sunak.

Labour’s carelessness in selling vital assets has cost UK investment, jobs, taxes and command and control over great swathes of the nation’s commerce.

Overseas ownership in high-tech is rarely positive, as we have seen with the roller-coaster ride for Arm Holdings.

When business conditions change, so do the ‘legal’ protections built in at the time of the takeover.

There is also a history of corporation taxes disappearing over the horizon and dividends ending up in tax havens.

Business Secretary Kwasi Kwarteng and his team have done their best to protect the interests of UK satellite pioneer Inmarsat, under the new ownership of American competitor Viasat, with promises of an R&D uplift of 30 per cent, UK ‘global’ headquarters and a British board able to make key strategic decisions.

All of this begs the question as to why Inmarsat, with ambition and willpower, couldn’t go it alone or be the predator rather than the prey. Once control is lost in into foreign hands, so is science, tech and patents. It is oh so rarely positive.