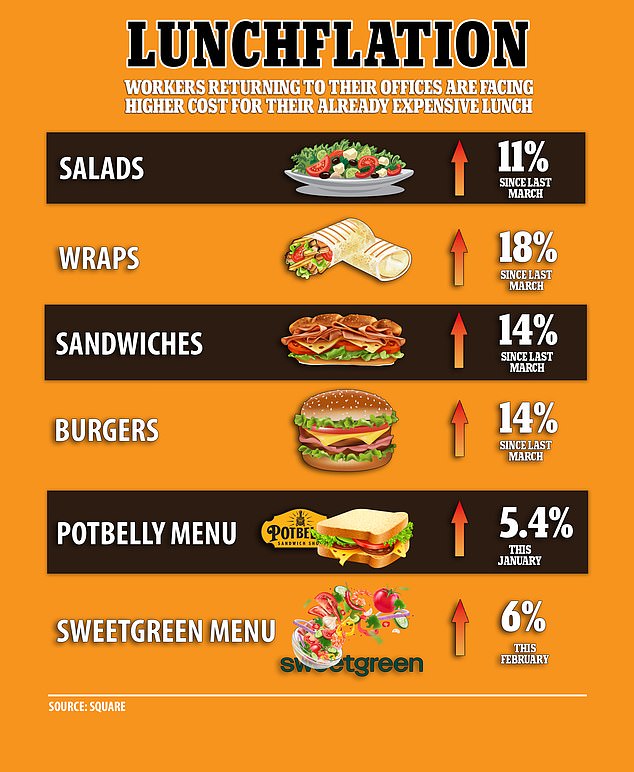 Employees returning to the office after being home for two years because of the pandemic were shocked to discover just how costly their lunches have become.

As of March 1, the average price of wraps is up 18 percent, sandwiches are up 14 percent, salads are up 11 percent and burgers are up 8 percent over last year, the Wall Street Journal reported, citing data from payments company Square.

Menu prices at restaurants overall have seen the highest increase since 1981, according to the Bureau of Labor Statistics, with prices skyrocketing in major cities, including San Francisco, Seattle, New York City, Washington, D.C., and Austin, Texas.

Before the pandemic, Edison Gomez bought an $8 burrito from the convenience store across the street from his office nearly every day. That burrito now costs him $12 with taxes.

The 33-year-old medical interpreter told the WSJ that the extra $4 – in addition to the surging price of gas to fund his nearly two-hour round-trip commute – takes a much larger chunk out of his earnings compared to his remote-work routine.

‘I’m spending at least $20 more a day than when I was at home, and it’s just becoming unsustainable to eat out,’ he said.

Inflation is likely to spike even higher next month, as the impact of soaring fuel prices is taken into account.

The Labor Department said in early March that the consumer price index increased 0.8 percent in February from the month before, for a 7.9 percent gain from a year ago.

As of March 1, the average price of wraps is up 18 percent, sandwiches are up 14 percent, salads are up 11 percent and burgers are up 8 percent, the Wall Street Journal reported, citing data from payments company Square 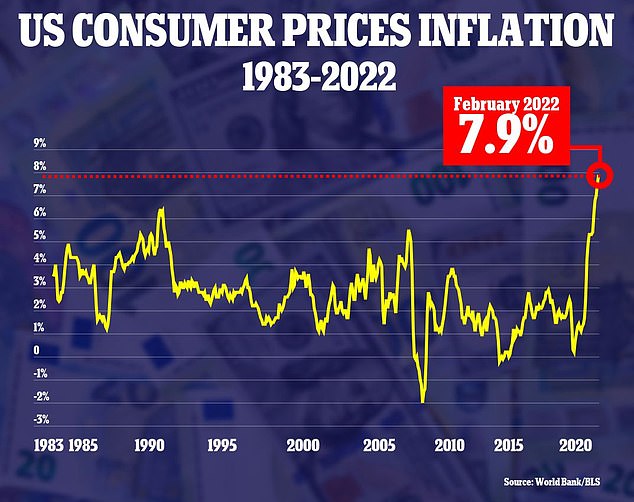 Inflation in the United States reached a new 40-year high of 7.9% in February in another grim signal for consumers 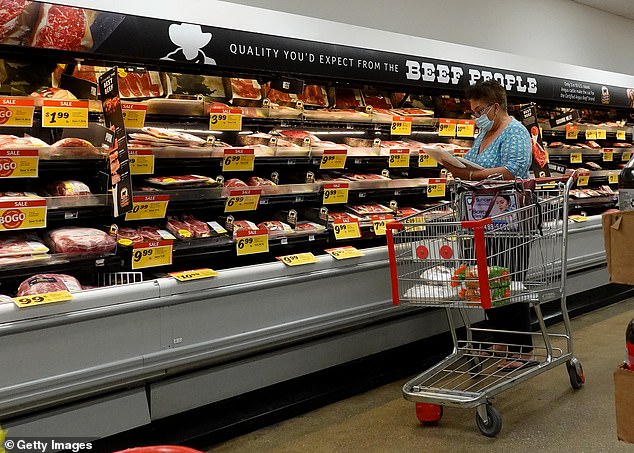 A customer shops at at a grocery store last month in Miami. Grocery prices are now up 8.6% from last year

Camilia Bing, 31, who lives in Maryland, told WSJ that she isn’t willing to give up working remotely, because she doesn’t want to go back to filling up the tank in her car every week or making sure she has the money to buy food at work.

She pointed out that the prices of goods is going up, but wages aren’t.

‘So we find ourselves in this place of panic. It’s like, ‘What do we do? How do we manage this? How do we make this dollar stretch?’ ‘ she said. ‘You stretch it, and it turns into 50 cents.’

Sweetgreen, a salad chain, says it raised menu prices 6 percent in January. But added that its relaunching a delivery service for office buildings. 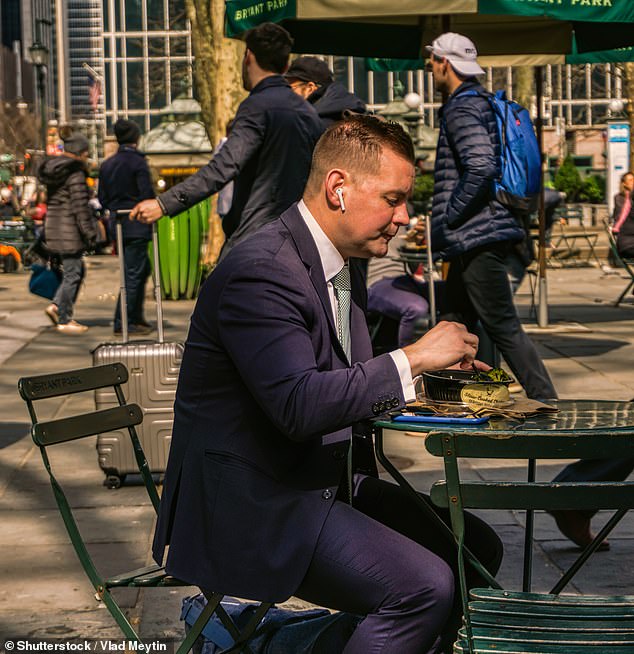 The price of food has gone up precipitously since last year, with the price of meat rising 14%, flour up 11.6%, and eggs higher by 11.4%. Above, a worker in New York City eats a takeout lunch

‘Like most businesses, we have had to address the rising costs of our main inputs: food and labor,’ Wright told the WSJ.

Mark Davis, a 30-year-old tech sales representative in Chicago, told the WSJ that he’s spending roughly $50 more every day on food and commuting than he was while working remotely.

‘But whether it’s because of the commute, having to carry an extra bag, putting it in the floor’s fridge and all the additional steps, I don’t enjoy bringing food in,’ he said, adding that what was once a $9 sandwich from a local sandwich chain now costs $15 or $16. ‘But what am I going to do, not eat something?’

Many workers are facing other cuts into their earnings thanks to inflation, which is likely to spike even higher next month, as the impact of soaring fuel prices is taken into account.

The dramatic rise in the cost of living is likely to spell trouble for Biden in November’s midterms, sparking claims the president’s decision to blame Russia is a diversionary tactic.

The Labor Department said last week that the consumer price index increased 0.8 percent in February from the month before, for a 7.9 percent gain from a year ago.

It is the largest annual gain since June of 1982. Excluding volatile food and energy, prices rose 6.4 percent, the largest 12-month change since the period ending August 1982.

The latest data showed the price of basic necessities rising sharply, with groceries up 8.6 percent from a year ago, shelter rising 4.7 percent, clothing up 6.6 percent, and energy up 25.6 percent.

Most of the inflationary impacts of Russia’s invasion of Ukraine were not captured in the consumer price index for February, which does not reflect the fallout from oil and commodities prices that soared in early March.

The price of gasoline set new all-time records for three consecutive days in early March, hitting a national average of $4.32, but those increases will only show up when March inflation data is released.

For most Americans, inflation is running far ahead of pay raises received in the last year, making it harder for them to afford necessities like food, gas and rent.

As a consequence, inflation has become a top political threat to Biden and congressional Democrats as the crucial midterm elections draw closer. Small business owners now say in surveys that it’s their primary economic concern, too.

In his statement, Biden touted a strong recovery in the jobs market, with the latest unemployment data showing that jobless claims levels have returned to pre-pandemic averages.

‘At the same time, today’s inflation report is a reminder that Americans’ budgets are being stretched by price increases and families are starting to feel the impacts of Putin’s price hike,’ he added.

‘I know that higher prices impact a family’s budget, which is why I am fighting to bring down the everyday prices that are squeezing Americans,’ said Biden. 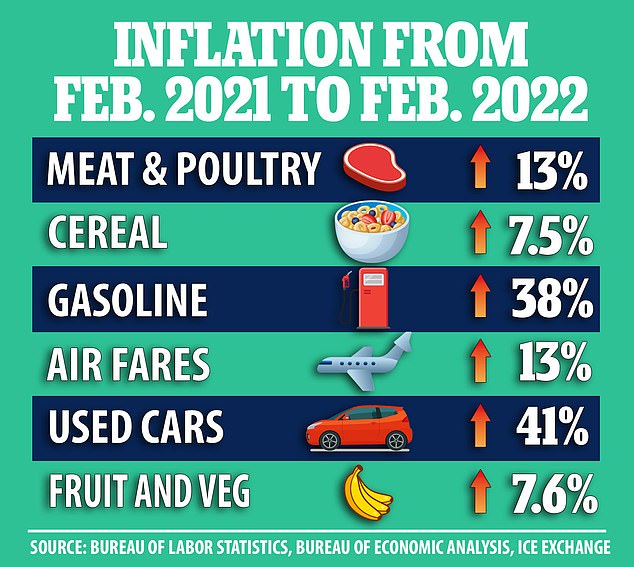 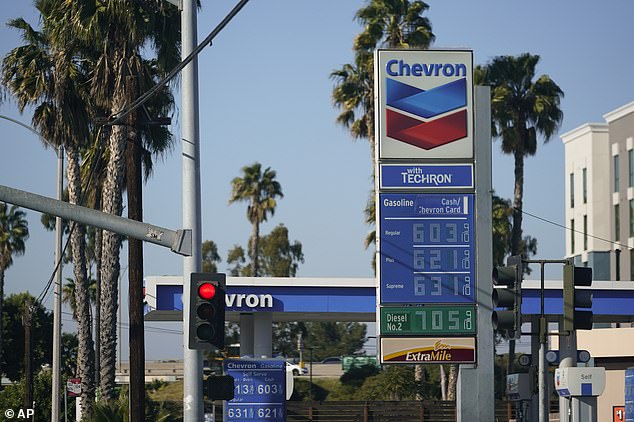 Gas prices are displayed at a gas station in Long Beach, California on Wednesday. The national average price of gasoline set a new all-time high on Thursday, hitting $4.32 per gallon for regular

Biden touted his move to release 60 million barrels of oil from strategic reserves, although the move did nothing to reduce crude oil prices. He also touted his initiative to manufacture goods in America, which he claims will reduce prices.

Though Biden insists that his policies aren’t to blame for soaring prices, Republican critics have been quick to point the finger at his administration and Democrats in Congress.

‘No one is buying the Democrats’ desperate excuses for inflation, but everyone is paying for them,’ he added.

Wall Street’s main indexes opened lower on Thursday after the new inflation data, which cemented the case for an interest rate hike by the Federal Reserve later this month.

For over a year now, inflation has way overshot the Fed’s 2 percent annual target. The U.S. central bank is expected to start raising interest rates next Wednesday to stamp out inflation, with economists expecting as many as seven rate hikes this year.

The Fed faces a delicate challenge, though: If it tightens credit too aggressively this year, it risks undercutting the economy and perhaps triggering a recession.

For now, solid consumer spending, spurred in part by a further reopening of the economy as Omicron fades, on top of higher wages and pricier gas, will likely send inflation higher for months.

Oil prices did fall back Wednesday on reports that the United Arab Emirates will urge fellow OPEC members to boost production. U.S. oil was down 12 percent to $108.70 a barrel, though still up sharply from about $90 before Russia’s invasion.

Yet energy markets have been so volatile that it’s impossible to know if the decline will stick. If Europe were to join the U.S. and the United Kingdom and bar Russian oil imports, analysts estimate that prices could soar as high as $160 a barrel. 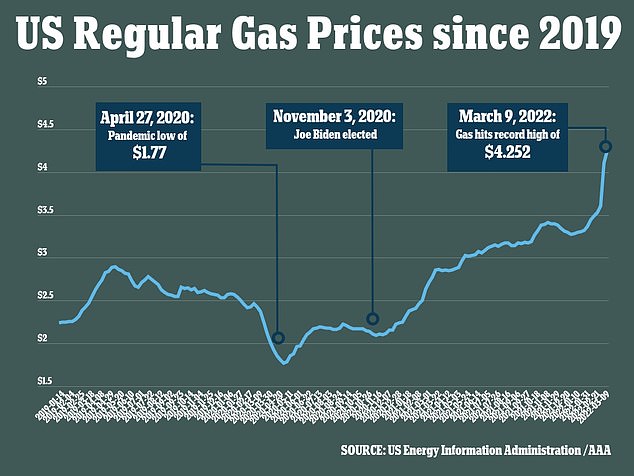 The national average price of gas hit $4.252 on Wednesday, setting an all-time record for the second day in a row