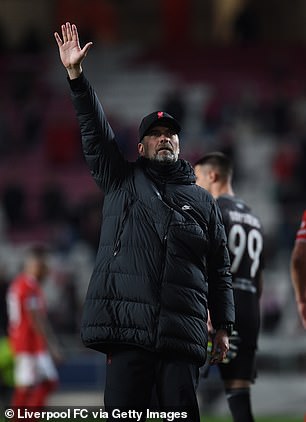 ‘This game is NOT done’: Jurgen Klopp warns his side against complacency and stresses that they still have a job to do at Anfield next week despite convincing 3-1 win in Lisbon

By Dominic King for the Daily Mail

Jurgen Klopp warned Liverpool still have it all to do to reach the Champions League semi-finals regardless of a commanding night in Lisbon.

Liverpool took a significant step towards setting up a late four date against Bayern Munich or Villarreal with a 3-1 dismissal of Benfica, a score that could – and probably should – have been bigger had they not squandered a number of chances.

Benfica’s players looked deflated at the final whistle, after Luis Diaz’s late strike had given Liverpool breathing space, but mindful of what happened in the last 16, when Inter Milan won at Anfield 1-0 having lost the first game 2-0, he stressed there must be no complacency.

‘No, this game is not done,’ said Klopp, who saw Ibrahima Konate and Sadio Mane give Liverpool a perfect start before Darwin Nunez pulled a goal back after half-time.

‘The game was slightly more open then we wished but in the end we scored.

‘I think everyone in the room would agree we could have scored more goals.

The best player of Benfica was the goalie probably, which says a lot. It is half-time, we are two goals up.

‘We were two goals up and we knew it was not easy. Now they come to Anfield and we have to use that.’

Klopp was relieved that he was able to make five substitutions to manage the minutes of his players ahead of Sunday’s potential title decider at Manchester City; Liverpool’s manager made it clear his side are underdogs, calling Pep Guardiola’s side ‘the best in the world’.

The German insisted he has no worries over the form of Mo Salah or Mane, who were both substituted after 60 minutes.

Salah, especially, looked out of sorts and missed a couple of big chances, something Klopp believes is a hangover from his commitments with Egypt. 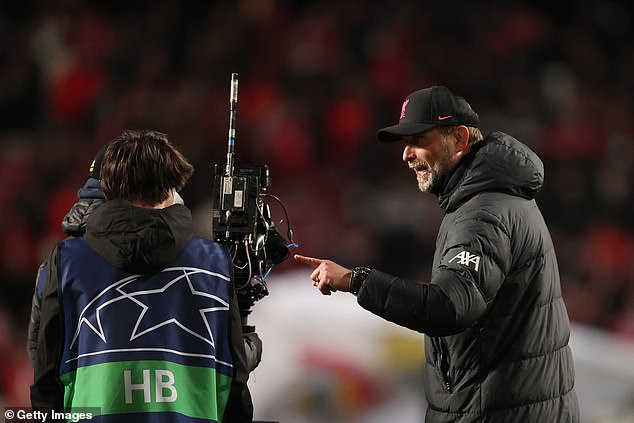 ‘My reaction to Mo (hugging him) was completely normal,’ said Klopp.

‘I did nothing different to whatever usually I do. If the game is kind of decided then you are a bit more affectionate with the players who come off, if it is open as it was here, then it is usually more of a handshake.

‘The boys want to score. With all the stories around, it is clear Mo wanted to score as well, but it is fine.

Both boys came back from Africa with massive pressure, both boys had to put it on their shoulders, both boys need to settle. Mo will be completely fine.’