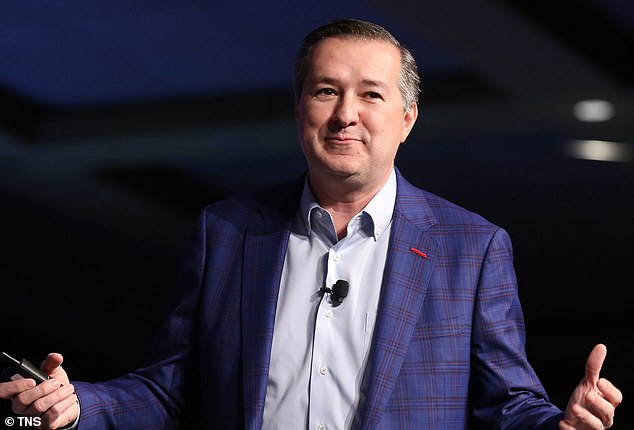 The Chelsea Supporters’ Trust will have the opportunity to grill Tom and Laura Ricketts about the Islamophobic emails that have thrown the family’s bid to buy the club in jeopardy.

Representatives of the Ricketts bid are in London as their attempts to takeover at Chelsea accelerate.

The Ricketts’ offer is one of four shortlisted bids, but their offer has been disrupted by major objection from supporters.

Head of the family Joe Ricketts was forced to apologise in 2019 after a series of leaked emails revealed the American businessman had written ‘Muslims are naturally my enemy’.

The re-emergence of those emails following confirmation of their bid interest has sparked a backlash among sections of Chelsea supporters, who protested against their bid ahead of the game against Brentford on Saturday.

And Tom and Laura Ricketts – patriarch Joe’s children – will have the opportunity to discuss their father’s emails in a video call meeting with the CST.

In a statement, Laura Ricketts said: ‘We have had a memorable few days in London, taking the opportunity to meet as many people as possible from a wide variety of backgrounds.

‘Obviously, I can’t comment on talks we had with Chelsea officials because that has to remain confidential.

‘But I can say we had very informative and enjoyable meetings with some passionate fan groups – in particular with Tracy Brown from Chelsea Pride and Kerrie Evans from Chelsea Women Supporters Group. 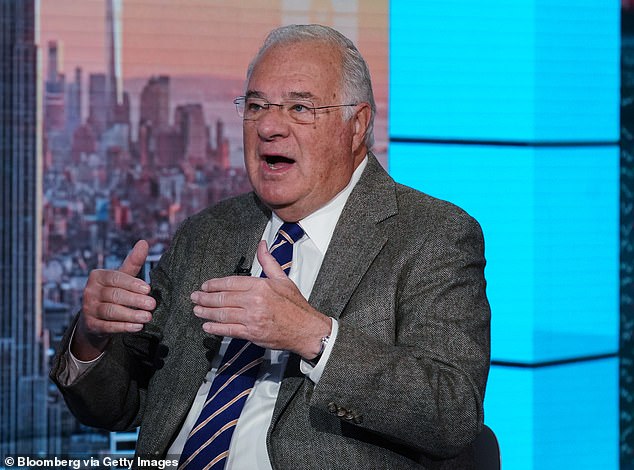 ‘We also met Sanjay Bhandari, the Chair of Kick It Out, and it was wonderful to hear about all the work he’s doing. We admire their approach and would like to introduce them to Major League Baseball.

‘Tracy Brown reminded me of a lot of people I know and have worked with in Chicago – leaders who put themselves out there for their community. She loves Chelsea and wants herself and her community to be acknowledged and to have a voice.

‘We agreed to stay in touch, starting with a Zoom next week with me and the Founder of Out at Wrigley, an annual LGBTQ+ event that the Cubs have hosted at Wrigley Field since 2001.

‘I was also thrilled to go to the Chelsea Women’s game at the weekend and I flew in early to make the match. It was a joy to see the incredible athletic talent of the Chelsea Women and to also experience the supporters’ amazing energy at Kingsmeadow.

‘Much of my life’s work has been about empowering and supporting women, so to see these young women playing at this level was a real treat for me. It was also so great to see all the families who were at the game. 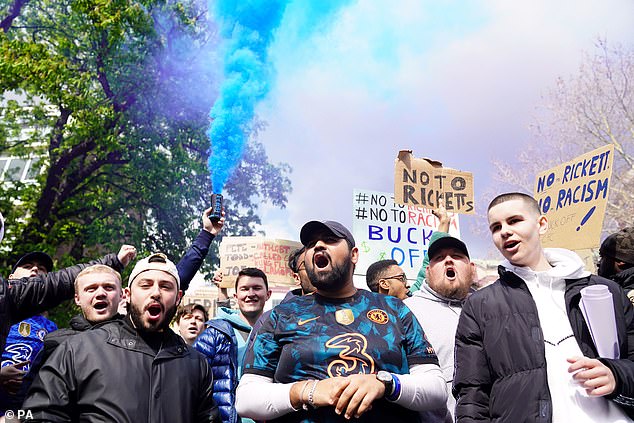 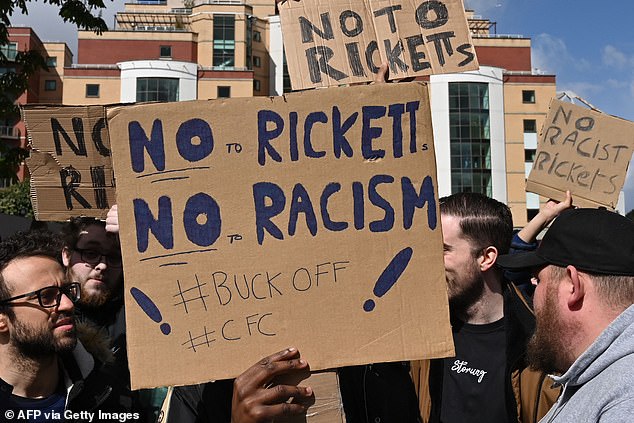 They held aloft signs reading ‘No to Rickett, No to Racism’ before last Saturday’s match

‘Sport has such power to bring communities together and family is at the heart of the community. Some of the girls there reminded me of my 11-year-old daughter. For young girls to see the Chelsea Women on the pitch can be inspiring and empowering to them.

‘In recent weeks, we’ve also had several valuable conversations with the Chelsea Supporters’ Trust. I appreciate their passion for Chelsea and the important questions they’ve raised. I look forward to continuing the good conversations we’ve begun.

‘We all need to be listening and speaking up, and I feel a particular responsibility because of the position I’m in.

‘We’re not going to be able to persuade all the fans right away that we will be good stewards of Chelsea – we’re going to have to show them with meaningful action if we are successful in our bid. But I can assure all Chelsea fans that it has been my life’s work to fight against discrimination and bigotry of any kind.

‘Coming out as an LGBTQ+ woman has influenced my perspective and sensitivity about diversity and inclusion. I can’t know what it’s like to walk in another person’s shoes, but I can begin to understand and have an awareness of their different experience.

‘And that’s a gift. In the position that I’m in, I feel a sense of responsibility to be an advocate. To me, being an advocate means speaking up, and also listening.

‘When we assumed responsibility for the Chicago Cubs and its legacy, we immediately realised that teams like the Cubs don’t belong to one person or organisation. They belong to the fans. ‘We’re stewards – and we’re answerable to the fans. That’s how we see it in Chicago – and it would be exactly the same at Chelsea.

‘There is such power in sport for community building and to bring diverse people together. At Cubs Charities, we have developed our own sport-based youth development programming that engages young people and families in under-served communities. As the Chair of Cubs Charities, ‘I am proud of our work and the impact it has on so many lives.

‘Here, the Chelsea Foundation already makes a significant impact and I would hope we could help build on this.

‘We strive to be champions both on and off the field. It’s what makes Chelsea great, and is a tradition we would honour if we were to become the club’s next stewards.’