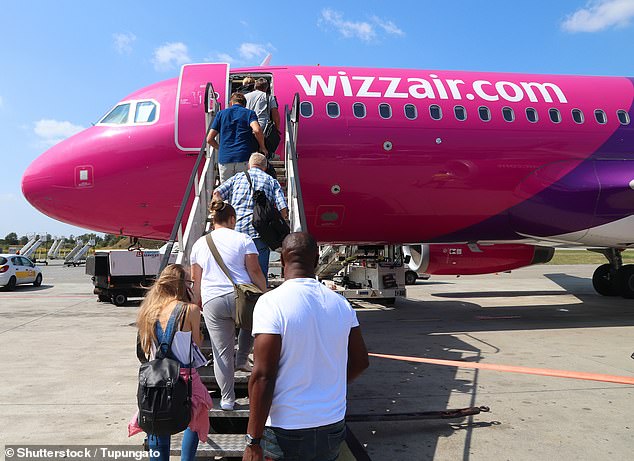 Budget airline Wizz Air has boosted cabin crew wages and changed its salary structure amid the battle for staff in aviation.

The London-listed Hungarian airline has raised wages by 12.5 per cent for cabin crew, who will now be guaranteed 70 per cent of their overall annual salary.

Previously, flight attendants received just 35 per cent of guaranteed wages, with the rest made up of various elements, such as commission on in-flight sales.

Boost: Wizz has raised wages by 12.5 per cent for cabin crew, who will now be guaranteed 70 per cent of their overall annual salary

Airlines are battling to attract staff back to an industry that was forced to lay off thousands of workers during the pandemic.

Wizz Air’s UK managing director Marion Geoffroy said the change will ‘give people confidence to work for an airline’, adding: ‘If there is a downturn then they still have a guaranteed salary that will help them go through a time of crisis.’

Wizz Air is hiring up to 60 flight attendants.

British Airways is offering a welcome bonus of £1,000 to poach trained crew from rivals.