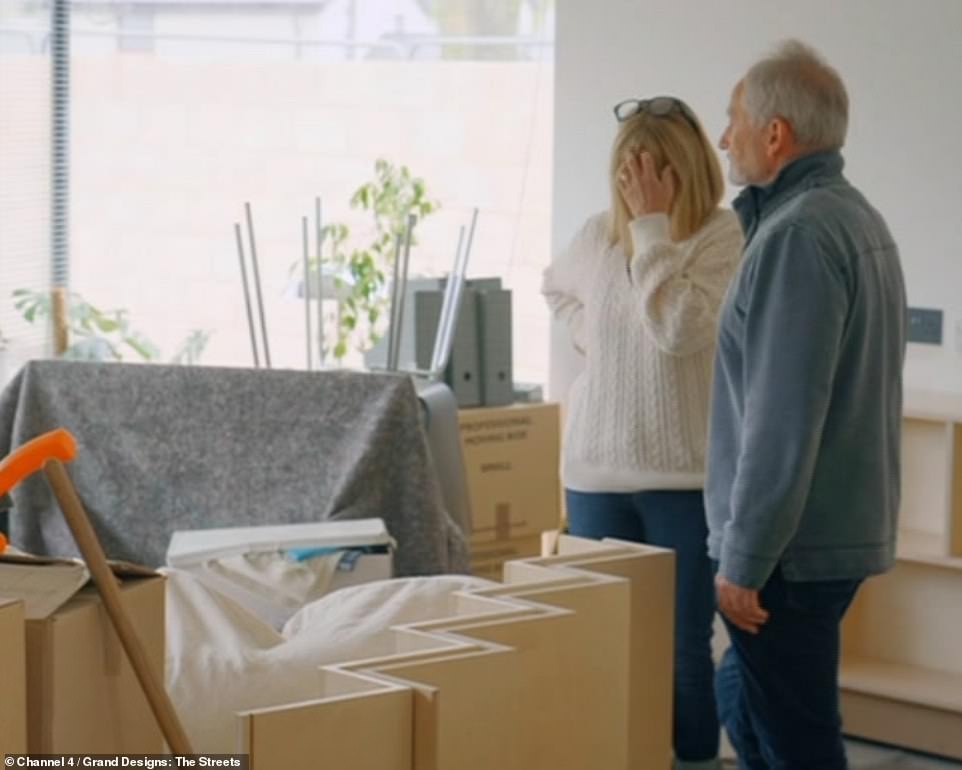 A couple in their 60s were rushed to hospital and left in tears after running out of money in an emotional episode of Grand Designs: The Streets last night.

Architect John and his wife Julia were determined to see out their retirement in Graven Hills, in Oxfordshire in a dream house they would have built themselves.

However, after spending months working on their home tirelessly, they tearfully confessed they had run out of money to finance the project as it neared its end.

Julia sobbed as she admitted they had ‘no money left,’ asking her husband John: ‘So we can’t afford any of the stuff that I wanted? Its such a mess.’

They were both later hospitalised after suffering from ‘severe chest pains’ during the project, with Julia confessing they ‘wished they hadn’t embarked on the build.’

However despite the challenges, the couple finished the house’s main building, with the garden and surrounding wall left unfinished, going £15,000 over budget.

Julia sheepishly admitted to Kevin that John had had to dip into his retirement fund to finish the home.

Architect John and his wife Julia were determined to see out their retirement in Graven Hills, in Oxfordshire in a dream house they would have built themselves. However, after months spent working on their home tirelessly, they were left in tears on Grand Designs: The Streets after they said they had ran out of money to finance the project as it neared its end

As the couple started the build, they told Kevin they had tried to construct their own home six times in 30 years but something had always come up to derail their plans.

Meanwhile they explained they would be spending £1,700 on rented accommodation after selling their house to finance their project.

The couple had hoped to finish the build quickly so they could leave their rented accommodation, however, towards the end of the build, as money ran out, nerves took over.

Both John and Julia both up in hospital as their funds dried up while they were doing the project. 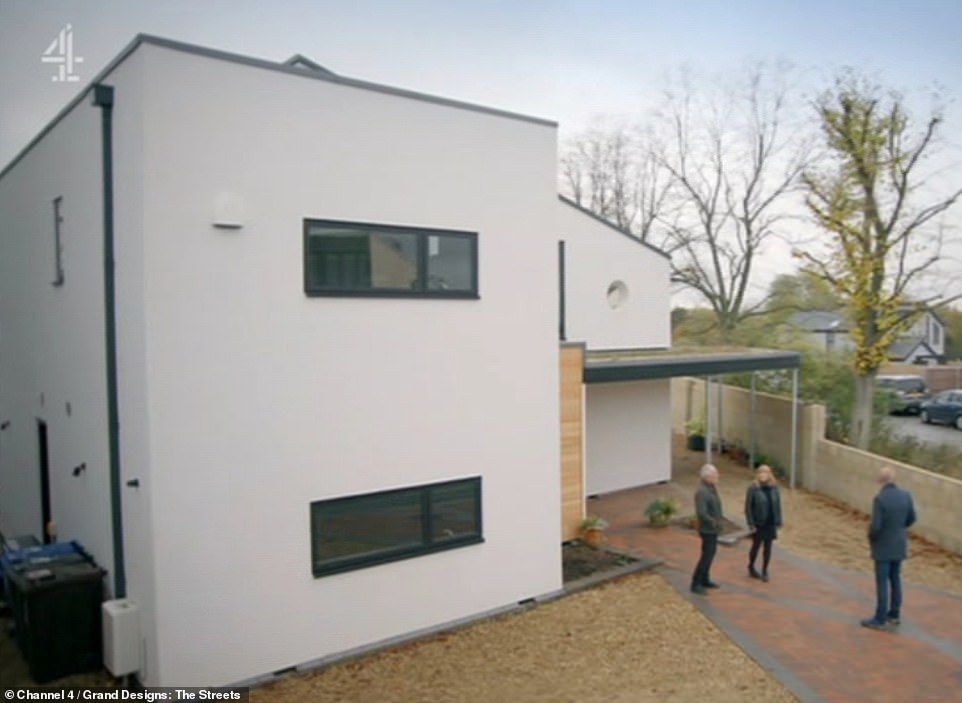 The couple, who confessed they had dreamed of building their own home for 30 years, said they were unsure if the project had been worth it (pictured, their finished home) 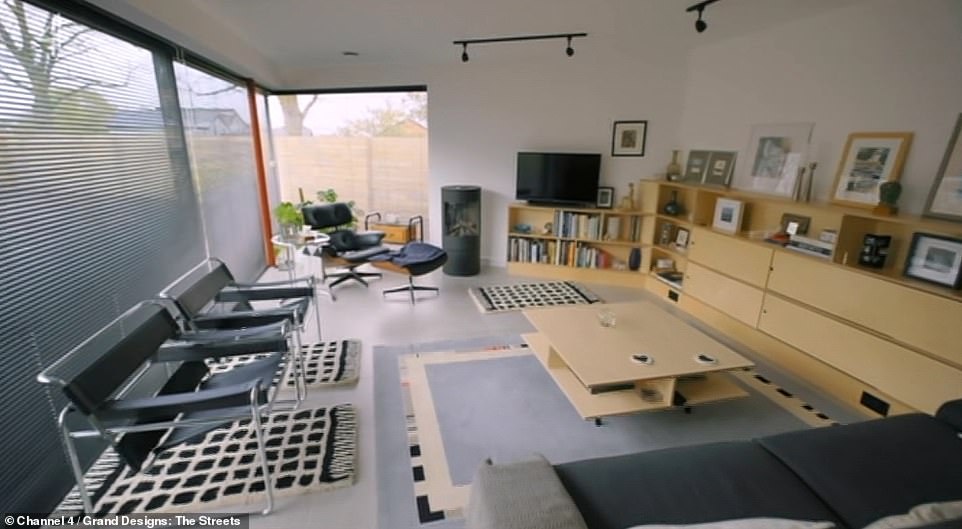 Architect John said he wanted to make sure to optimise all the space he could in the house, to make up for the small space (pictured, the living room)

Julia explained: ‘We took it in turns to have some kind of meltdown. It ended up with me having severe chest pains which was a bit scary.

‘I ended up being whisked off to hospital and tested for heart stuff. We both wished we hadn’t started on this road to be quite honest.’

John also revealed how he had to be taken to hospital by his daughter after suffering a ‘dizzy spell’ while working on the house, with his heart rate later recorded at over 188.

In spite of their financial and health challenges, the couple managed to finish the home, but admitted they couldn’t tell if it had been worth the hardships they’d been through.

Julie told Kevin: ‘We’re massively over budget and obviously we can’t go and get a mortgage because we’re too old. It has meant that John has had to dip into his already fairly minor pension pot. 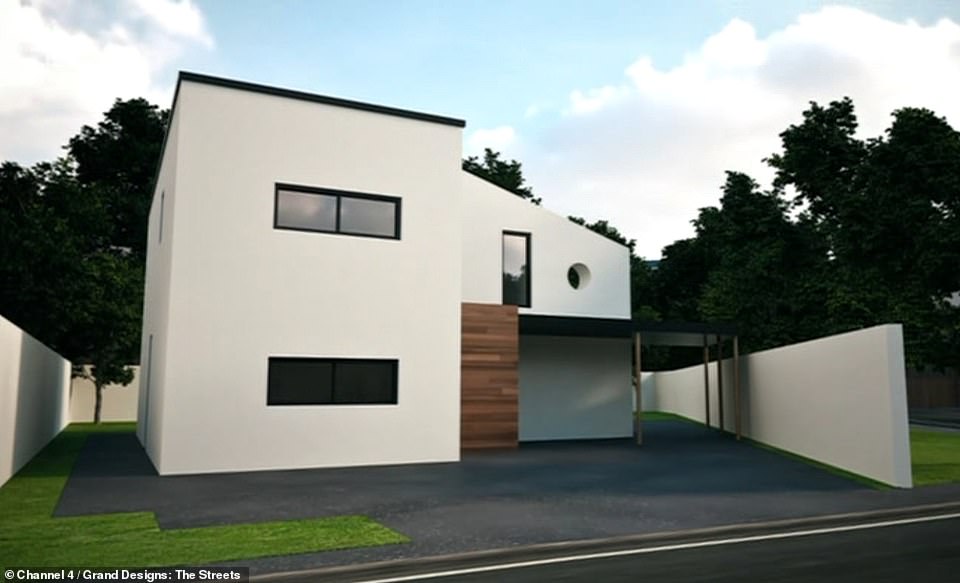 As the couple started the build, they told Kevin they tried to construct their own home six times in 30 years but something always came up to derail their plans (pictured, a 3D rendering of their home)

‘And the whole idea initially, or one of the reasons we did this, was to downsize and have some money over to supplement our pension. Hence why I’m still working.’

And John admitted he couldn’t tell Kevin if building the house had been worth the ‘physical, emotional, spiritual pain.’

‘I may regret this. There are still some quite large sums of money going out to complete this. I won’t really know how comfortable we will be,’ he candidly said.

But while the house come at a bigger financial and emotional cost than expected, the finished result was a marvel of design. 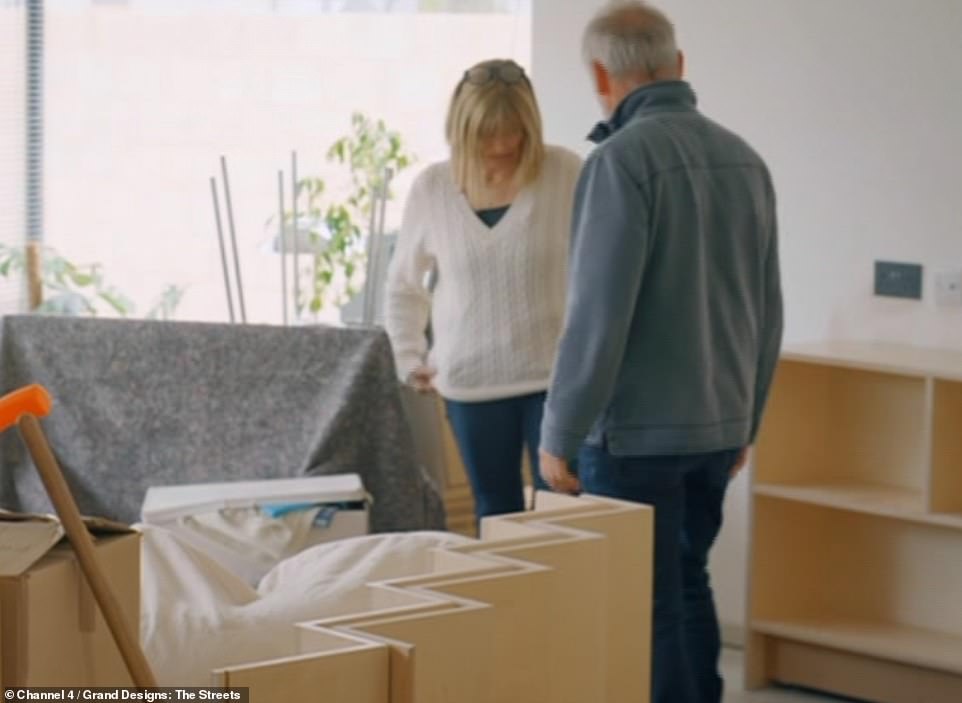 However, Julia was left in floods of tears after the couple ran out of money, with John confessing he had had to dip into his pension pot to finish off the build (pictured) 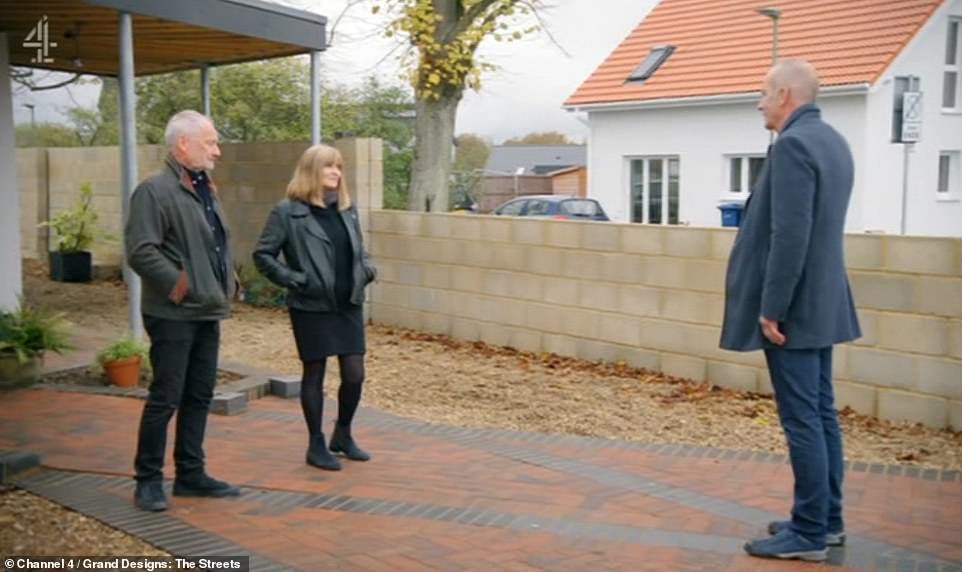 At the end of the project, the couple confessed they had run out of money so hadn’t been able to finish the outside of their property 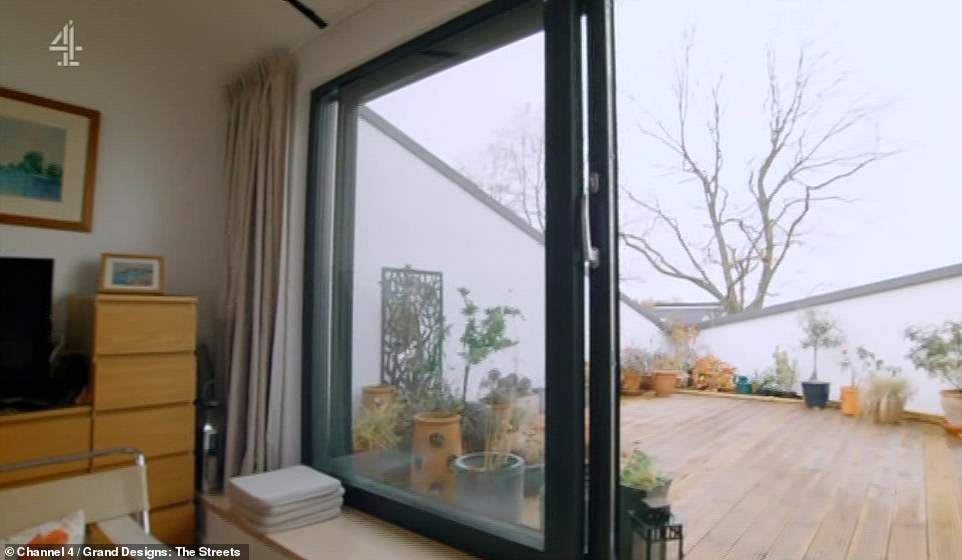 Upstairs, the master bedroom opened up through bay windows to a private roof terrace full of plants, which flooded the room with plenty of light 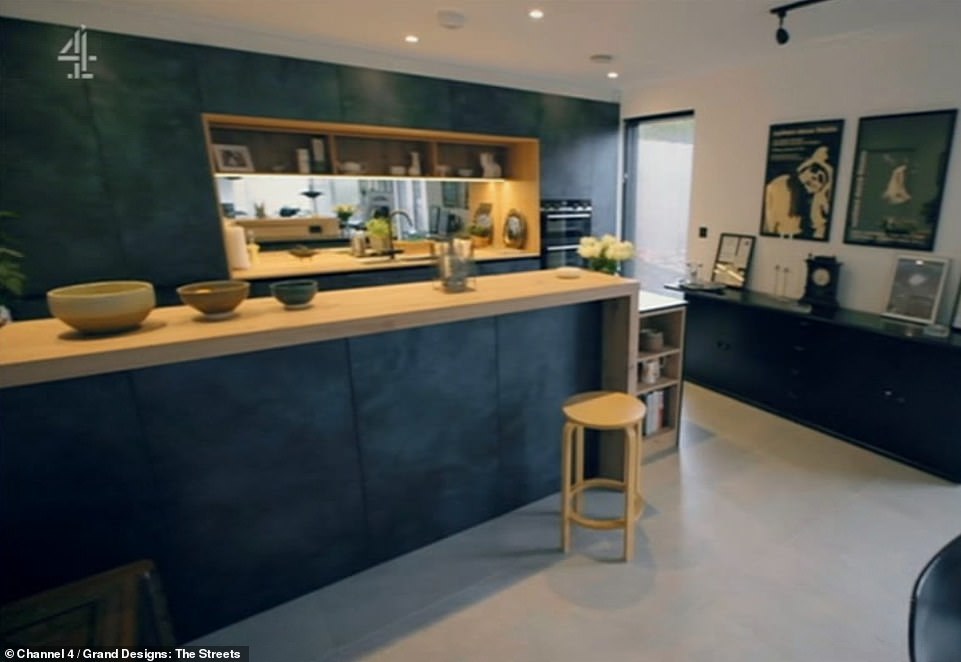 And on the ground floor, a self-contained kitchen was built in an open-plan area and covered in striking dark grey panels, with a stylish breakfast bar

The wedged house was made from insulate panels made off-site and designed to fit into each other to create an airtight structure.

The ground flour, which open to the garden with bay windows letting plenty of light in, contained an open-plan living area with a compact kitchen covered in wood and a comfortable size living-room with very clever storage to maximise space, designed by John.

A downstairs bedroom, shower room and utility room were also located on the same floor.

Making use of all usable space to fit the content of their four bedroom home into the three bedroom house, John designed the staircase leading to the upper floor like a bookshelf that the couple used to store books, CDs and sentimental items. 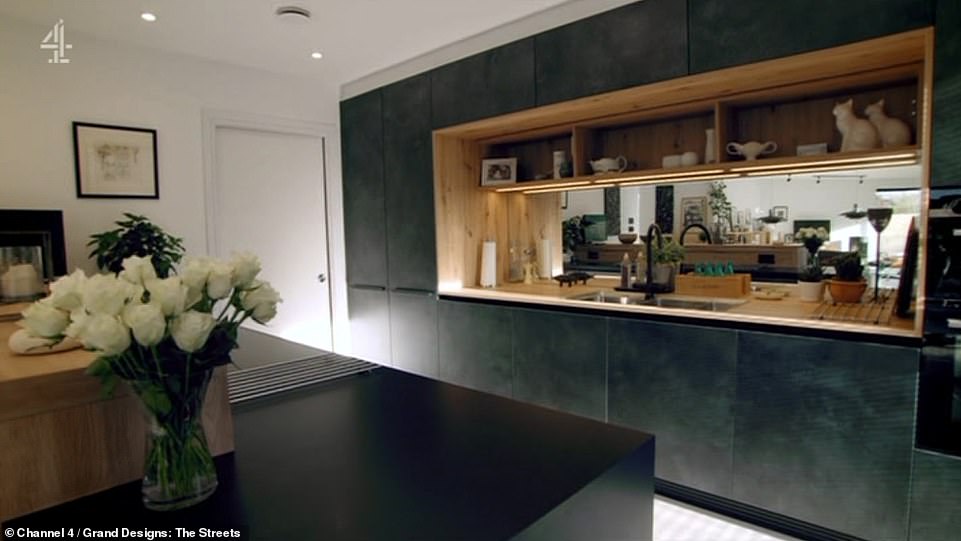 John joked that Julia hadn’t wanted the kitchen to look like a traditional cooking space, so he had designed the room to ensure all the cupboards, fridge and storage were hidden 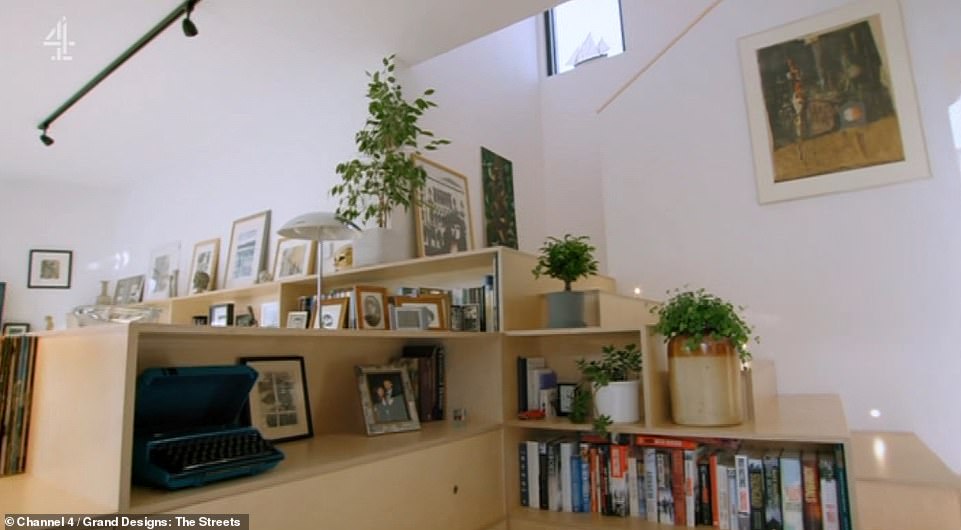 Meanwhile the couple also designed the stairs leading to the upper parts of the home as a bookshelf, in order to get more storage space

Upstairs, the couple build two rooms, including a nice size bedroom opening to a private roof terrace with portholes on each side.

Ken was also amazed by the beautiful bathroom, with a free-standing bathtub, plenty of storage and a shower and his and hers sinks.

Despite the couples saying they had finished the property, they confessed the house remained unfinished for now, including the garden, which was a simply plot of gravel at the time of Keven’s final visit.

The perimeter wall the couple wanted to build around their home for privacy also remained unfinished. This was due to the fact that material costs have risen since John and Julia undertook their project. 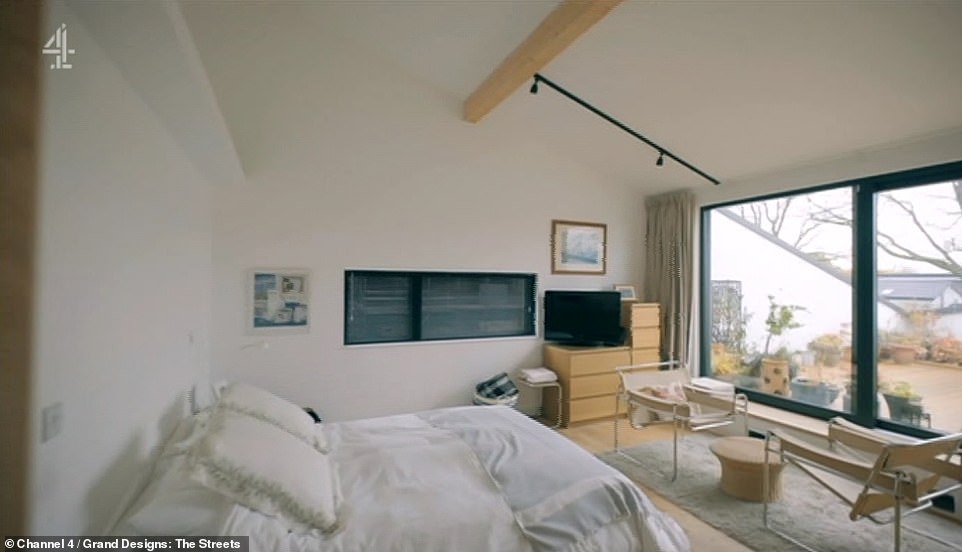 The couple designed the home with just two bedrooms on the second floor, with the master bedroom welcoming in lots of sunlight with a huge roof terrace (pictured) 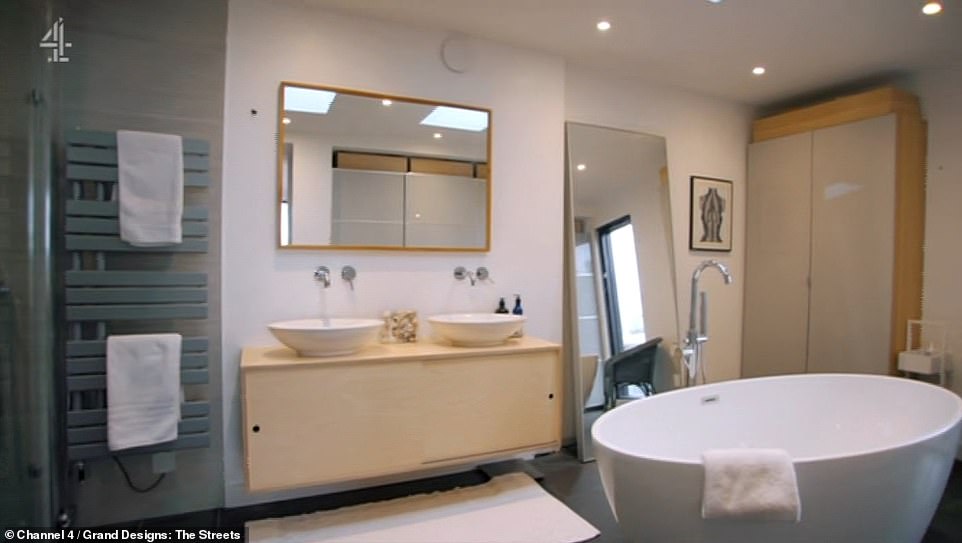 Upstairs, the luxurious bedroom contains a free-standing bathtub, his and hers’ sink and a shower, as well as two large mirror and built-in storage

Viewers said the financial challenges John and Julia met with was one of the main reasons not more people build their own homes.

”I don’t understand why more people don’t do this’. One year later ‘We have no money, we have both been in hospital with heart issues and we’ve run out of money’,’ one viewer said.

‘Dipped in to his pension to help pay for the house. Not ideal, but if you have to… They are near the end of the build, can’t give up on it, it looks so good,’ another said.

A third suggested it hadn’t been worth it for the couple, saying: ‘Both developed heart problems, they are skint and are having to continue to work.’

Another added: ‘Maybe next week the couple can just buy an existing house and do up the kitchen. Instead of going bankrupt?’

However despite the couple’s enthusiasm for the property, many viewers confessed they felt they should have ‘sold the house and bought a cheaper one’ to ease their financial woes