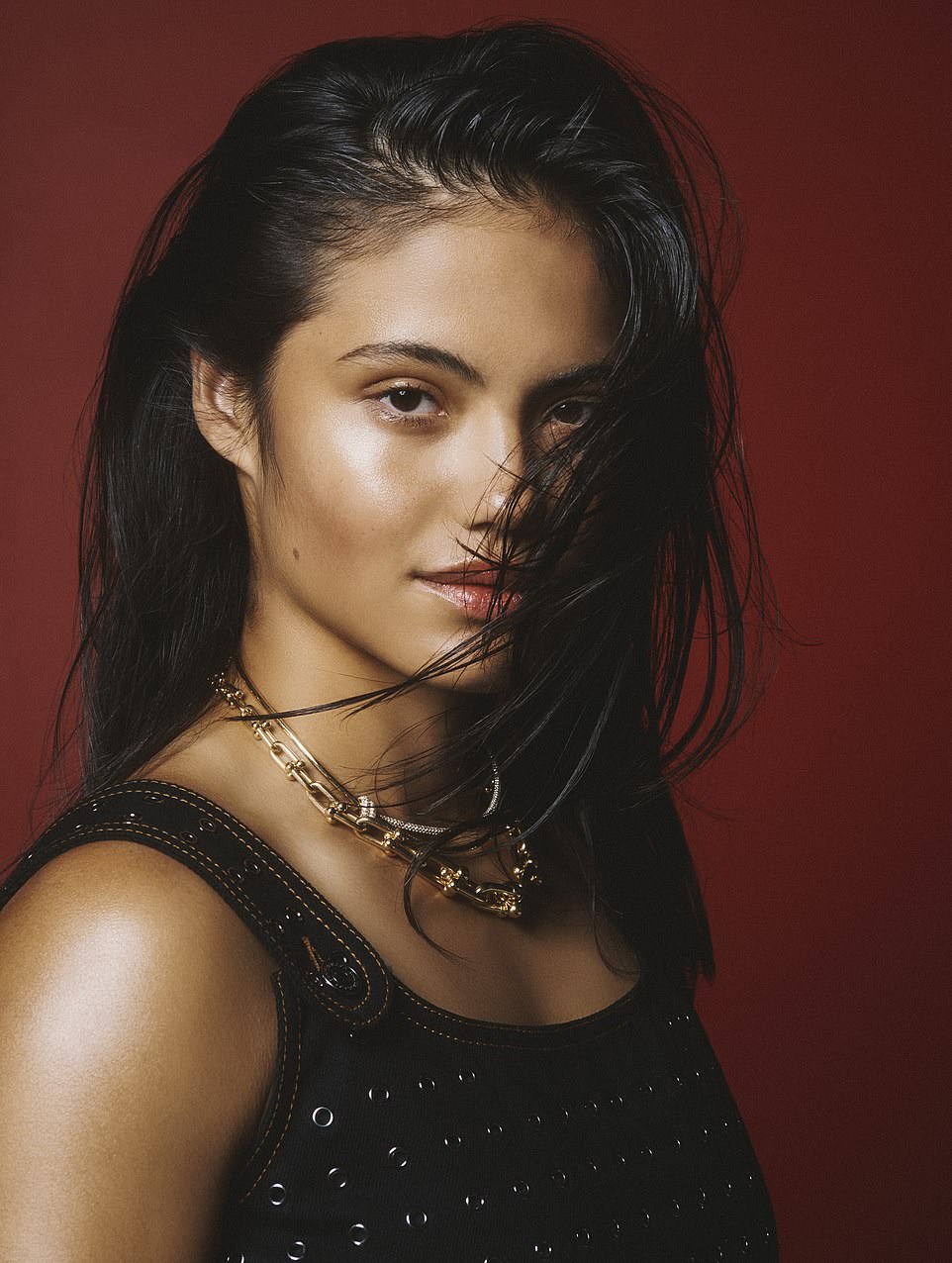 Tennis player Emma Raducanu has said she dreams of playing doubles with Andy Murray as she was unveiled as Elle UK’s newest cover star.

The sports star, who lives in Bromley, had a rapid rise to A-list celebrity status following her US Open triumph last September, and has since been invited to be ambassador for an array of luxury brands.

The teenager wrote tennis history at the US Open last year before a sensational winning run in New York enabled her to become the first ever qualifier to win a Grand Slam tournament.

In the cover shot on the front of Elle magazine, the teenager can be seen posing in a white shirt and sequined green skirt.

Tennis player Emma Raducanu, 19, has said she dreams of playing doubles with Andy Murray as she was unveiled as Elle UK’s newest cover star

In an interview inside, she explained how she feels ‘British’ but is ‘influenced by the cultures of both her parents.

She explained: ‘I grew up here, so I feel British. But I’m influenced by the cultures of both my parents.

‘My mum instilled respect for everyone as a big part of my life.

‘There’s also mental toughness and strength – not necessarily through being confident and everyone knowing that you are, but having that inner sense of belief. I feel like it’s a big thing in Asian culture.’ 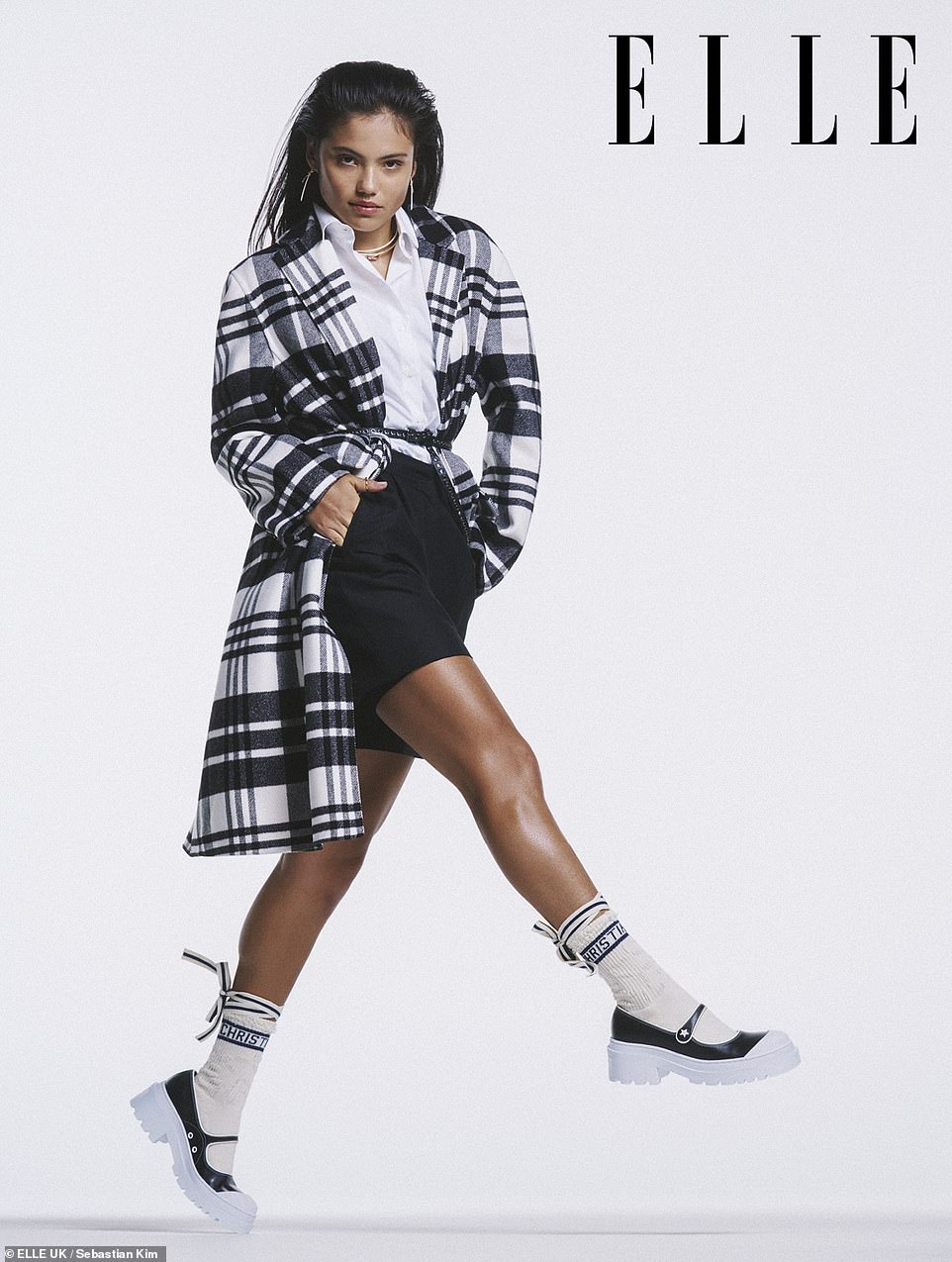 In a photoshoot inside the magazine, Emma can be seen wearing a white shirt and black mini shorts while showing off her tanned legs 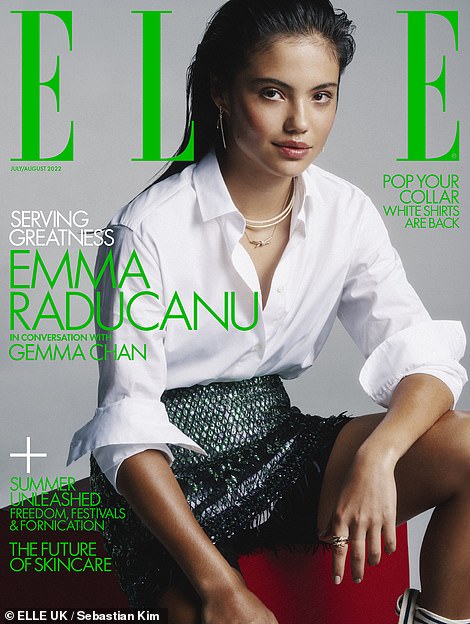 Meanwhile she continued: ‘I started [playing tennis] because my dad was taking lessons in the park and my parents couldn’t leave me home alone.

‘I would ride my bicycle on the court next door, and then gradually he would throw me balls.

‘I developed pretty good coordination after doing different sports like basketball and motocross, which helped my tennis in the end.’

Elsewhere, she spoke about her first trip to Wimbledon, saying: ‘We were asking everyone for their autographs – and I mean everyone! I’ve still got photographs from that day.

‘To be able to actually say that I’ve played on those courts, especially Court One and hopefully Centre Court this year, is pretty special.’

Meanwhile she revealed she remains down-to-earth, despite her success in tournaments.

The teenager explained how she celebrated her win at the US Open in 2021, saying: ‘When I won the US Open, there was nothing big or amazing that my parents did to celebrate – we just came home and ate dumplings, and that was it. We are very normal.’

Raducanu gained celebrity status with her maiden Grand Slam win at Flushing Meadows, with brands lining up to offer her sponsorship deals and a host of magazines featuring her on the front cover.

Since winning in September, the teenager has announced deals with:

But she said her biggest ‘pinch me moment’ to date was receiving a letter from the Queen after winning the US open.

Elsewhere, Emma explained her biggest dream, revealing: ‘Just once in my life, I’d love to play doubles with Andy Murray at Wimbledon.’

Raducanu gained celebrity status with her maiden Grand Slam win at Flushing Meadows, with brands lining up to offer her sponsorship deals and a host of magazines featuring her on the front cover.

Days later she found herself among the A-list elite at New York’s Met Gala – the biggest night in fashion.

She rose to the occasion in a stunning midriff-baring, monochrome Chanel outfit complete with pearls encircling her waist and Tiffany diamonds in her ears.

Personally invited by Vogue chief Dame Anna Wintour, she was seated on the $500,000 Chanel table with its celebrity ambassadors – prompting speculation she would join their ranks as an ambassador.

Meanwhile, the teenager was then revealed as the face of jewellery brand Tiffany and Co in a deal estimated to be worth more than £2million.

In October, she became the latest celebrity to be announced as an ambassador for high-end fashion house Dior.

In the role, the teen will represent Dior Creative Director Maria Grazia Chiuri’s womenswear collections as well as the luxury brand’s skincare and make-up ranges. It is not known how much Emma will be paid for her role as an ambassador for Dior.

She has since scooped deals with Evian and appeared as the face of Sports Direct’s 2021 Christmas campaign.

The tennis star has been heralded as a ‘sponsor’s dream’, and is on course to become the highest earning female sports star of all time.

It was also reported that she laid the groundwork for her potential earnings aged 17, registering Harbour 6 Limited to manage her finances.

The July/August issue of Elle UK is on sale from 8 June.