‘How has Neuer saved this?!’: Fans are left dumb-founded as Germany’s 36-year-old No 1 makes astonishing recovery to stop Nico Barella’s effort on the line in Germany’s thrashing of Italy in Nations League

Fans are heaping praise on Germany’s goalkeeper Manuel Neuer after he produced one of the greatest saves in recent memory against Italy, defying logic to keep the ball out of the back of the net.

Germany battered the Euro 2020 winners 5-2 at Borussia Park in Monchengladbach to seal their first win of the Nations League campaign.

Joshua Kimmich opened the scoring for the hosts, before Ilkay Gundogan and Thomas Muller got in on the act. 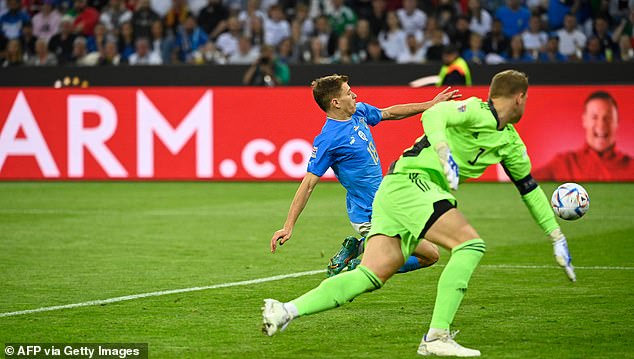 Chelsea’s Timo Werner rounded off Germany’s scoring with a quickfire brace to put Hansi Flick’s 5-0 up, before Italy reduced the deficit ever so slightly with strikes from Wilfried Gnito and Alessandro Bastoni.

The result, however, was left in the past with Bayern Munich goalkeeper Neuer stealing the headlines with his outrageous save.

Fans took to social media to praise the shot-stopper and even label him a ‘freak’ as the long-time Germany No.1 produced an astonishing recovery to deny what looked like a goal for Nico Barella at 3-0. 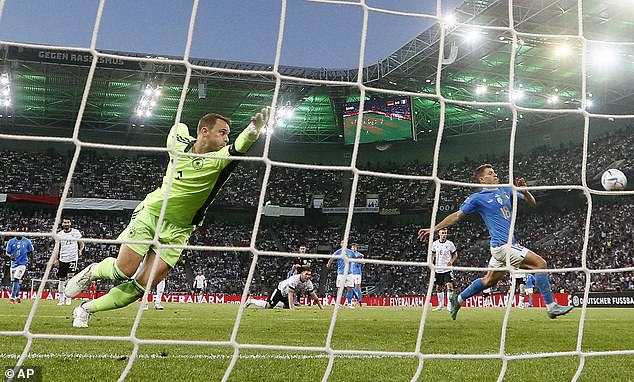 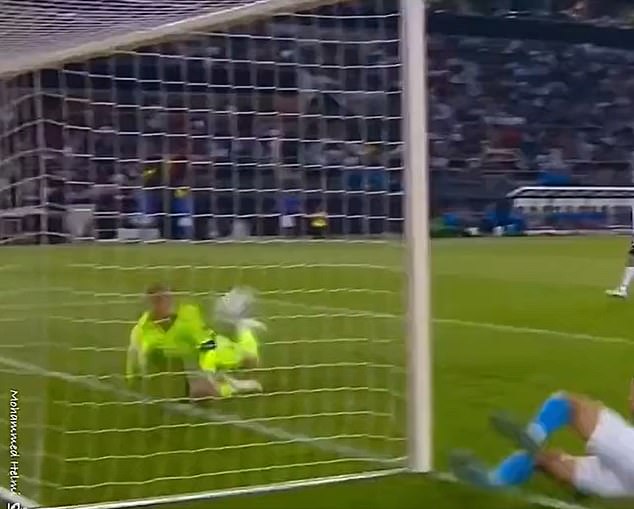 A scuffed shot made its way through to the Inter Milan midfielder and it look inevitable that he would find the back of the net.

The 36-year-old goalkeeper had been wrong-footed by the deflection on the ball but then somehow scrambled back to the goal-line and pushed the ball away to safety in explicable fashion.

One fan simply said: ‘HOW THE F*CK HAS NEUER SAVED THIS?!?

Another tweeted: ‘This. This isn’t normal, Manuel Neuer.

A third simply wrote: ‘Neuer is an absolute freak, how anybody is allowed to be that good at their sport is unbelievable.’

Some fans have even take it a step further by suggesting people should stop comparing fellow world-class goalkeepers such as Alisson, Ederson and Eduoard Mendy to Neuer.

A fan posted: ‘Dear Premier League fans, please, for the love of our beautiful game, never ever compare your Alissons, Edersons, other sons, Mendys and them keepers to the greatest of all time, Manuel Neuer, just because of a 7.6 rated performance away at Selhurst Park. It‘s a different game.

Another simply said: ‘What on earth is Manuel Neuer. That’s one of the best saves I’ve ever seen.’

Germany are second in UEFA Nations League Group C with six points after picking up their first win of the current campaign, following three draws.

Hansi Flick’s side are next in action when they take on Hungary on September 23 before then heading to Wembley Stadium to face England in their final Nations League clash.

They’ll be hoping Neuer can pull off more heroics to help them top the group with just two matches left to play.