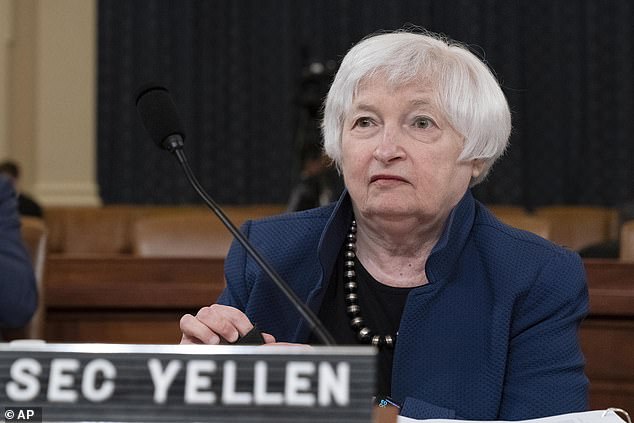 By Alex Brummer for the Daily Mail

The Americans have long taken a sanguine view of the impact of their currency on the rest of the world.

When President Nixon was advised of turmoil on the European currency markets in 1972, his riposte was ‘f*** the lira’.

A decade or so later, Ronald Reagan was confronted with questions about the disruption stemming from the strength of the dollar and he didn’t have a clue.

Cautious: US Treasury Secretary Janet Yellen has insisted currency market intervention should only to be used in ‘rare’ circumstances

Treasury Secretary James Baker sorted it out at the Plaza.

Now it is the turn of current Treasury Secretary Janet Yellen.

On a trip to Tokyo it was noted that the war on Ukraine had led to the rapid weakening of the yen to a 24-year low.

In the interests of financial stability, the G7 would have to address the issue. Yellen insisted currency market intervention should only to be used in ‘rare’ circumstances.

In recent weeks much of the focus has been on the weakness of sterling, which is down 12 per cent against the dollar this year. The decline is blamed on Brexit and the implosion of Boris Johnson’s government.

Dollar strength also has been disrupting the euro, the yen, the Swiss franc and almost every currency on earth.

The Federal Reserve moved surprisingly robustly to tackle inflation by raising its key interest rate by 0.75 of a percentage point at its June session. It may do the same this month in spite of warnings not to engage in monetary masochism.

America finds itself with energy self-sufficiency and is among the first G7 country to see fuel prices starting to moderate.

The UK, Europe and much of the rest of the world is bracing for a winter of surging prices and interrupted supplies.

In spite of a lack of storage, the UK is in a better place than much of the Continent as a result of the Langeled pipeline, delivering Norwegian gas to these shores, and capacity to process LNG.

A real-life idea of what the strong dollar means can be found by looking at the Economist magazine’s Big Mac index. It shows a burger in Japan is currently 42 per cent cheaper than in the US for someone converting dollars into yen.

That Yellen engaged with the Japanese finance ministry and central bank suggests currency divergences are fast moving up the global agenda.

Full control may not seem very different from 84 per cent state ownership.

But it is hard to think that the French government’s decision to buy up the minority shares in EDF, and the departure of chief executive Jean-Bernard Levy, does not signify big change.

Paris signals it could pay up to £8billion for the outstanding shares. That sent EDF stock sharply higher but it is still trading at less than one-third of the float price.

EDF has been the main vehicle for ensuring that France’s energy prices for households do not get out of hand.

In response to Ukraine, the country is planning a new fleet and refurbishment of dilapidated existing facilities.

Where does all this leave the UK? EDF won such a favourable deal from George Osborne on the future pricing of power from the super-generator at Hinkley, it is hard to see it pulling back from a £25billion project.

EDF is also the main commercial driver behind a second atomic power station at Sizewell. A decision on that is expected next week, but with the Government in policy disarray, there could be more delays.

Will a nationalised EDF have much interest in continued investment in the UK? Economies of scale could mean that a new plant at Sizewell could cut the cost of investment in France.

But overseas state ownership means the UK’s own power future rests with a France-first administration.

Here is a thought for our friends Paul and Gordon Singer of activists Elliott.

Amid their capacity to create bedlam, they have shown leadership in adopting retail book-selling through positive ownership of Waterstones in the UK and export of that model to America by seeking to turn around the creaking Barnes & Noble chain.

Think of the kudos if Elliott were to rescue the former Whitbread – now Costa – Awards, cruelly snatched away by new owners Coke after half-a-century.

It could work commercially too.