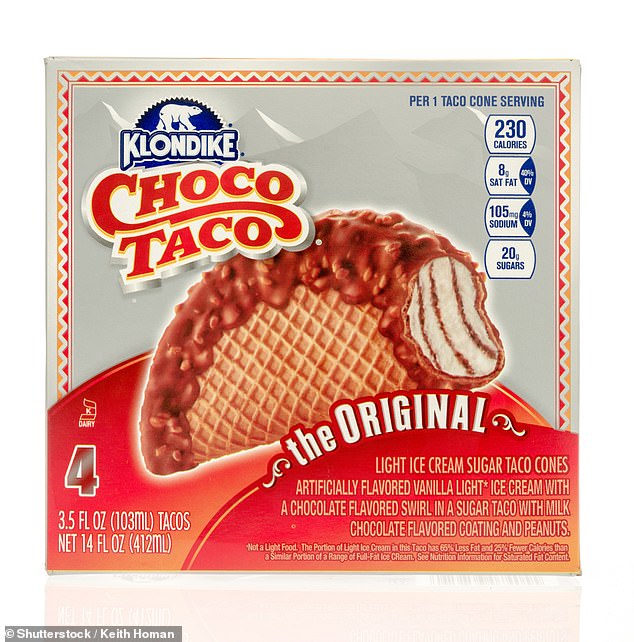 By Vanessa Serna For Dailymail.Com

Fans of the beloved Klondike Chaco Taco are in disbelief after the company announced it is discontinuing the childhood treat.

‘Is this true, @Klondikebar?’ Andrew Bradley wrote on Twitter. ‘Choco Taco is discontinued? if so, undo it.’

Klondike responded, ‘Unfortunately, it’s true that the Choco Taco has been discontinued in both 1ct and 4ct packs. We’d love for you to try other delicious frozen treats, including Klondike Cones, Shakes, Sandwiches, and of course, our signature Bar available nationwide.’

Marcm717 added to the fire, ‘Hey @Klondikebar there are bad decisions, like getting a face tattoo or french kissing an alligator, then there are horrifically bad inexcusable decisions like discontinuing the Choco Taco.’

Klondike immediately responded to the outrage saying it was ‘particularly painful.’

‘We know Choco Taco is a huge fan favorite and are a top seller for our out-of-home business, so this is particularly painful. We’re working hard to find a way to bring Choco Taco back to ice cream trucks in the coming years.’

Klondike announced the company is retiring the beloved Choco Taco frozen treat on Monday. Consumers immediately reacted urging for the company to bring it back 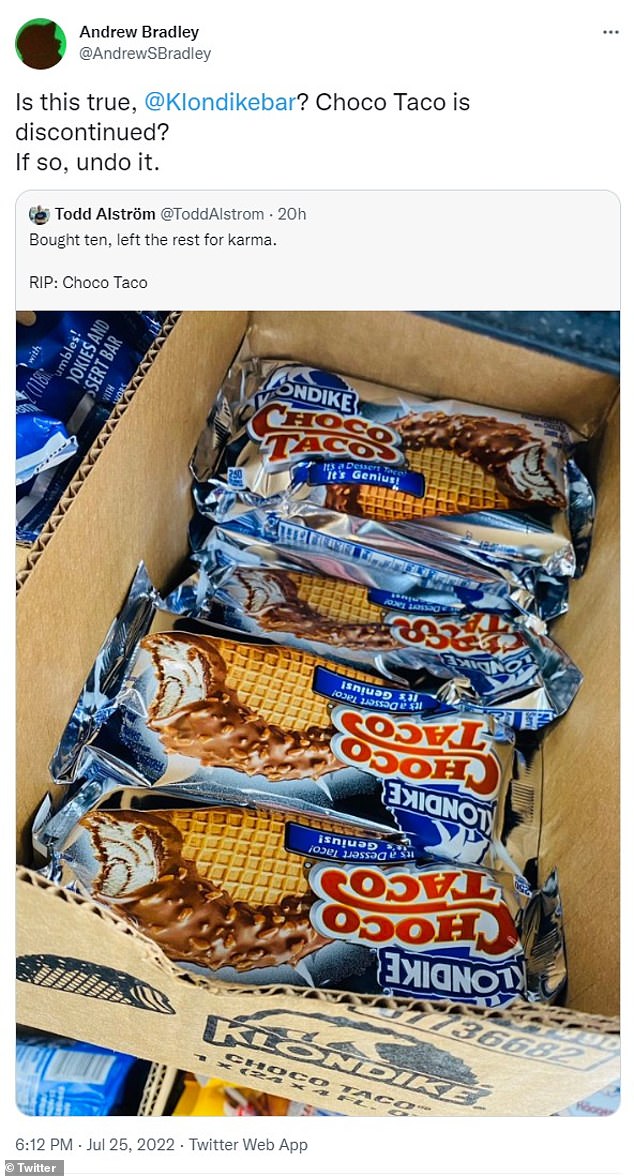 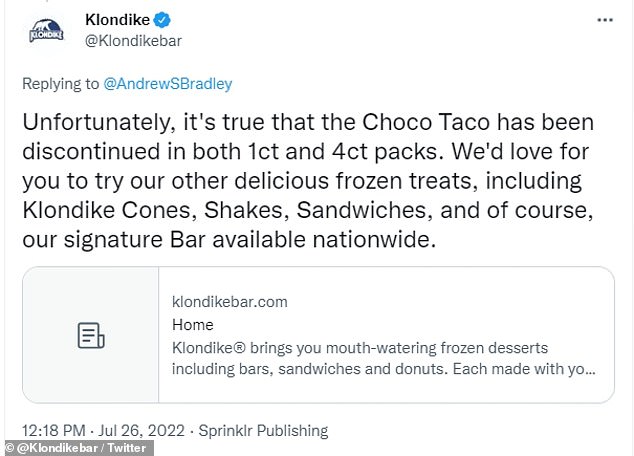 Klondike, which is owned by Unilever, recently celebrated its 100 year anniversary of selling cones, shakes, and other cold treats since 1922.

The Choco Taco was invented by Alan Drazen in Philadelphia in 1983, according to Eater. Drazen sought to create an ice cream unique to the company he worked at, Jack & Jill.

The cold treat that was inspired by Mexican cuisine is a waffle cone that mocks a taco shell filled with vanilla ice cream with fudge swirls. The hit treat is topped off with a hard chocolate shell infused with peanuts.

The Choco Taco has been on the market for nearly 40 years and skyrocketed in the ice cream market when Unilever – who also owns Klondike – purchased Jack & Jill in 1989.

The company blamed the decision to retire the Choco Taco on the shift in demand over the past two years.

‘We’ve experienced an unprecedented spike in demand across our portfolio and have had to make very tough decisions to ensure availability of our full portfolio,’ Klondike said. ‘A necessary but unfortunate park of this process is that we sometimes must discontinue products – we’re so sorry!’ 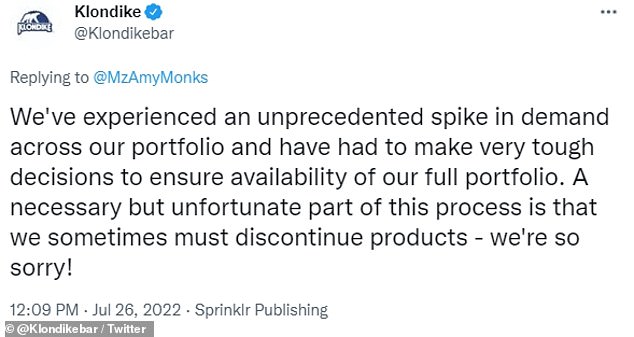 After nearly 40 years of the Choco Taco, Klondike blamed changes over the past few years as part of the reasoning behind discontinuing the treat

In attempt to save the summer treat, Reddit co-founder Alexis Ohanian, asked the company to purchase the rights to childhood favorite dessert.

‘Dear @Unilever – I’d like to buy the rights to your Choco Taco and keep it from melting away from future generations,’ Ohanian wrote on Twitter.

‘NEWS: Tomorrow I am introducing legislation to invoke the Defense Production Act to mandate the continued manufacture of Choco Tacos,’ Murphy wrote. ‘Please call your senator and demand they co-sponsor.’

History of the Choco Taco

The beloved frozen snack was invented by Alan Drazen in Philadelphia 1983, according to Eater.

At the time, Drazen worked at the company Jack & Jill Ice Cream Company – where the first Choco Tacos were served.

His desire to create an ice cream unique to the company sparked invention of the Choco Taco.

Drazen was convinced his invention created a new experience for ice cream lovers with every bite being filled with the ice cream, cone, nuts, and chocolate, he told Eater.

Until 1989, Jack & Jill sold the treat to wholesalers selling to small ice cream trucks until the company was purchased by Unilever – who also purchased Klondike in 1993.

Choco Taco made its way around the country for 40 years until the company announced its retirement on July 25, 2022.