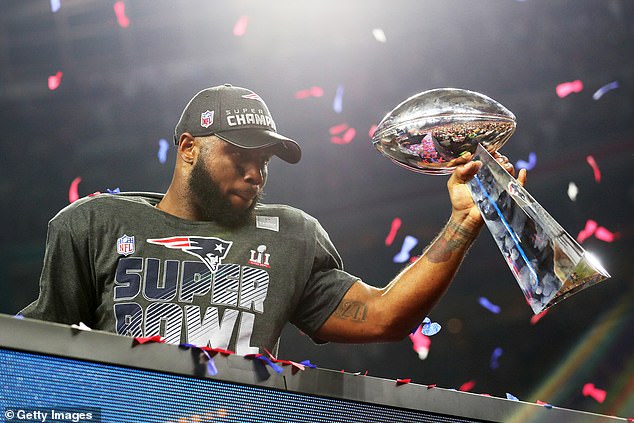 Three-time Super Bowl-winning Patriots RB James White RETIRES at 30 after eight seasons in the NFL, admitting defeat on the hip injury that wrecked his campaign

By Patrick Djordjevic For Dailymail.Com

New England Patriots favorite James White has announced his retirement from the NFL after a storied eight-year career.

The former Wisconsin star played all eight seasons in New England and is a three-time Super Bowl champion.

White’s most famous football moment came as he rushed in the game-winning touchdown in overtime after the Patriots trailed 28-3 to Atlanta in Super Bowl LI.

While the game will be remembered for various spinetingling moments, it is often forgotten how integral No. 28 was in the Pats’ comeback. White scored 20 of New England’s 31 second half points as they conquered the Falcons.

He said: ‘It’s been an honor to represent my family, my teammates, and the people of New England as a Patriot!

‘Reflecting on my nine years in the NFL, and all the sacrifices it took to get here, there are many people that were just as much part of this journey.

‘To be able to play my entire career for one franchise, in front of the best fans in the NFL, has been a tremendous blessing and honor.

‘To say that Foxboro will always hold a special place in my heart is an understatement. It’s been the most significant chapter of my adulthood.’ 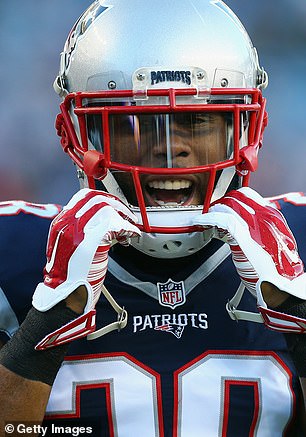 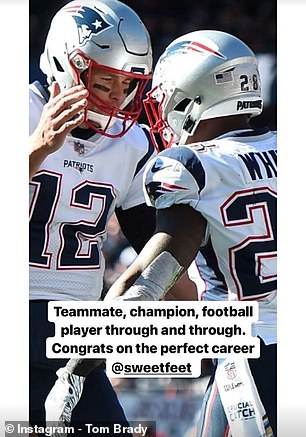 James White’s career in the NFL

– Only player to score TD in OT of a Super Bowl

– Most points scored in a Super Bowl

–  NEVER lost a fumble in his career

The 5-foot-10 receiving back was often known as Tom Brady’s safety blanket out of the backfield, and thrived in the passing game, amassing 28 receiving touchdowns in his Super Bowl laden NFL life. He also piled on 3,784 receiving yards.

White also rushed for 1,424 yards on the ground, including 16 rushing touchdowns.

Brady paid tribute to his former teammate on Instagram Thursday, saying ‘Teammate, champion, football player through and through. Congrats on the perfect career @sweetfeet.’

The Fort Lauderdale native is almost certainly be inducted into the Patriots’ Hall of Fame. While playing, White was honored with a position in New England’s All-Dynasty and All-2010s teams.

‘James White has always been one of the most reliable and dependable players on the field. As great of a player as James has been for us, he’s an even better person,’ it read.

‘He is a man of great character and integrity and earned everyone’s respect through his work ethic, professionalism and positive daily demeanor.’

In March, he signed a two-year, $5million extension with the team. 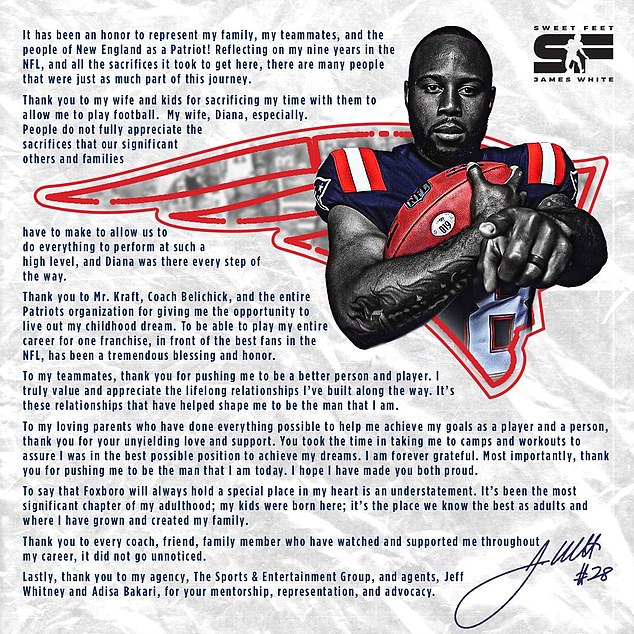 White released a statement thanking Patriot Nation, teammates and family for their support