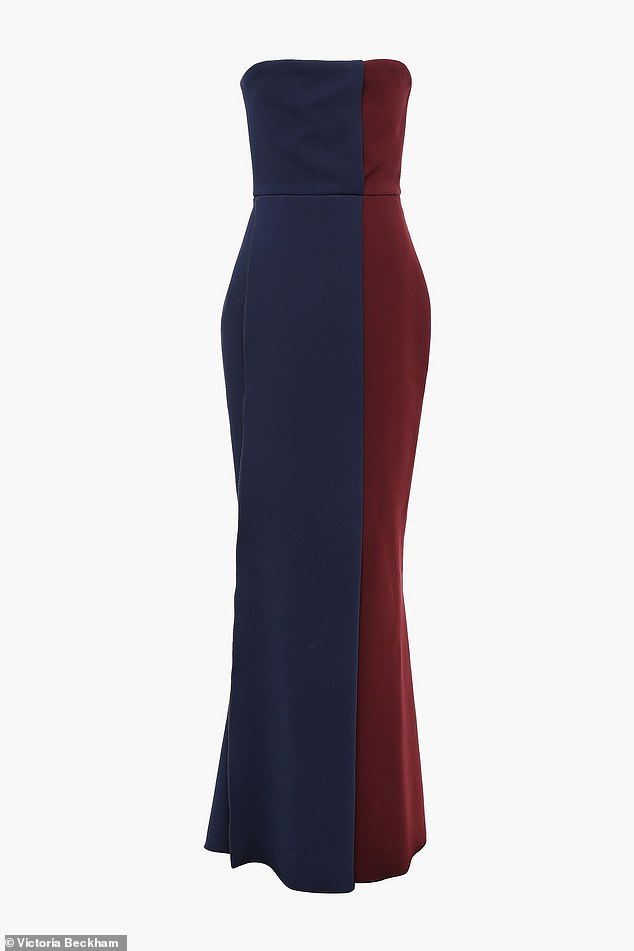 They retail from £500 to nearly £3,000, yet Victoria Beckham‘s designer buys are now being sold for up 70 per cent off on a luxury online discount store, where dresses, skirts and shoes from her range can be bought for as little as £195.

The 48-year-old launched her eponymous fashion label in 2008 with a small collection of dresses, but in recent days it’s been revealed the brand is well into the red with heavy losses.

A spokeswoman for Victoria confirmed the figures for her fashion label to The Mirror. Despite the big losses, the Beckham’s global empire has still reportedly doubled its profits, raking in £11.6million.

It was also disclosed that some of Victoria’s products – which now include handbags, coats, shoes and accessories – are being sold at a heavy discount, with one dress reduced by nearly £1,300.

Luxury online discount store The Outnet has slashed prices on VB pieces, with sales seemingly being increased from the usual 30 per cent off to a whopping 70 per cent.

MailOnline contacted a representative for Victoria Beckham for comment.

Here, FEMAIL reveals a selection of the VB items with slashed prices…

This stunning strapless panelled two-tone stretch-crepe gown originally cost £2,900. But The Outnet is selling it for £870 – a 70 per cent saving for customers 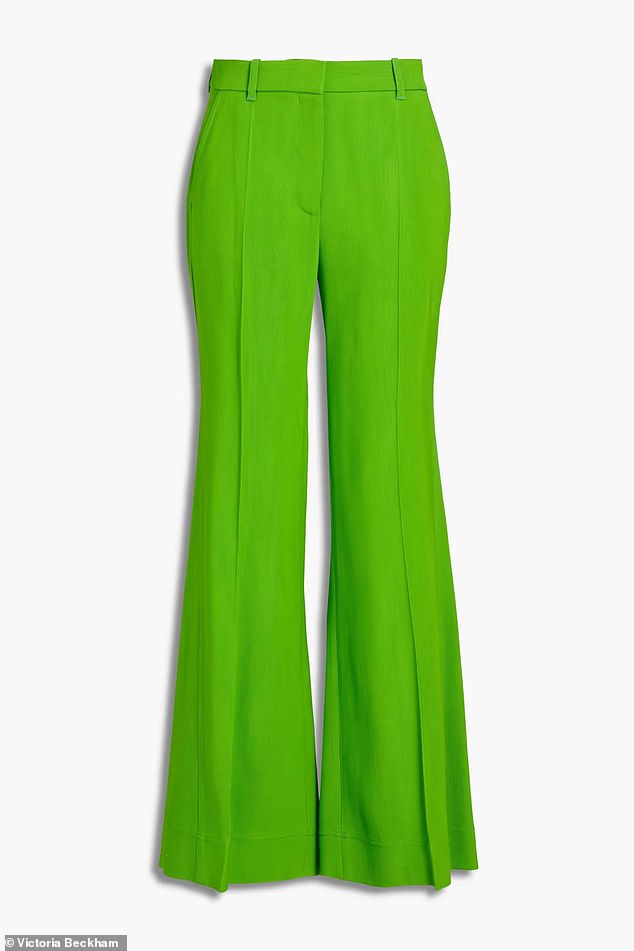 These crepe flared trousers in bright green, which feature pressed creases, two front slant pockets and a high-rise cut, have 60 per cent off, costing just £278, rather than the £690 retail price 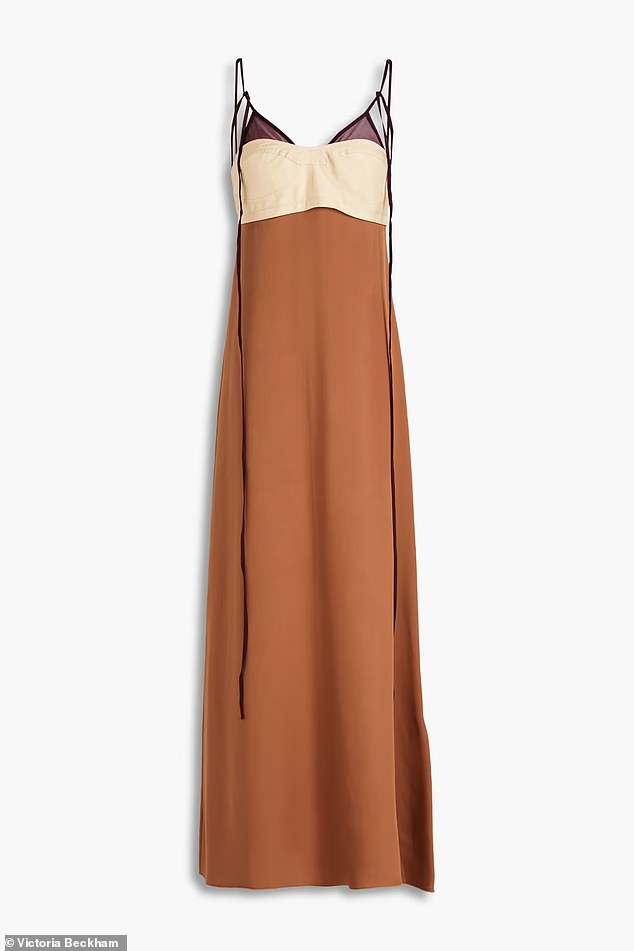 Initially priced at £1,390, the above panelled colour-block organza, woven and silk-satin crepe maxi dress has 50 per cent off at the luxury discount store, now costing £695 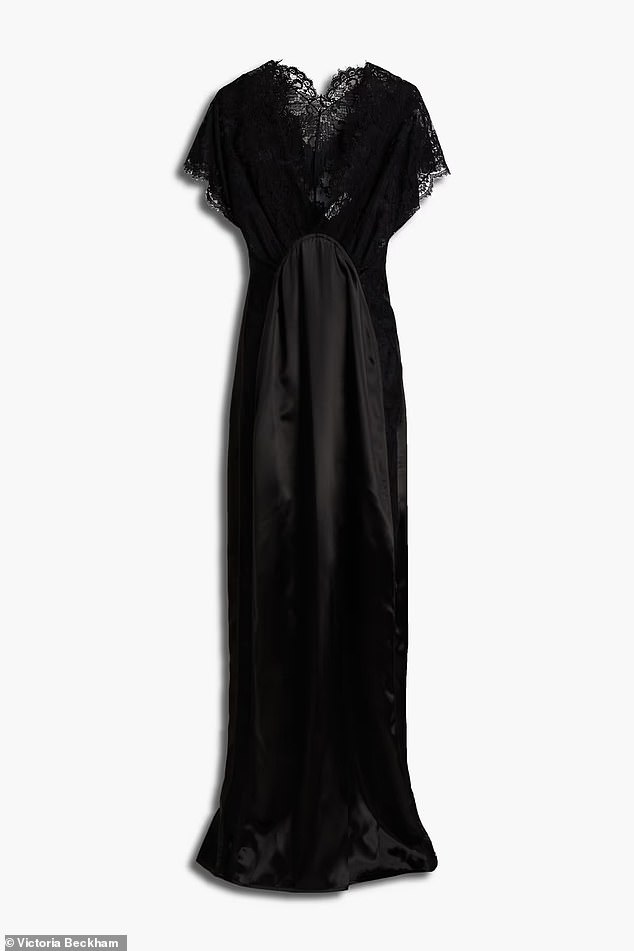 This sophisticated black lace-panelled pleated satin gown was £1,890. But The Outnet shoppers can now purchase the product for £756, saving 60 per cent 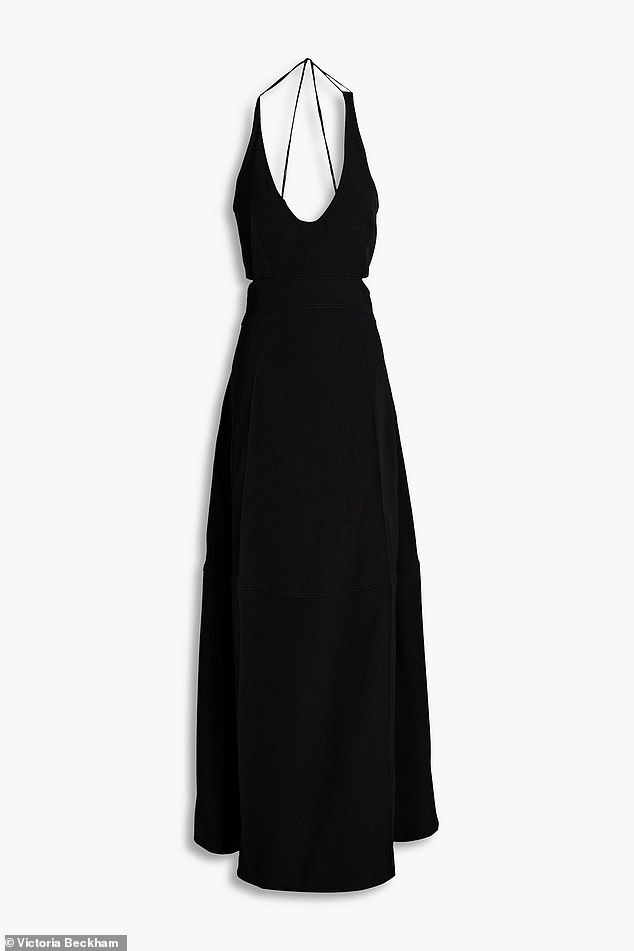 Priced at £1,460 when first released as part of the Victoria Beckham range, this designer cut-out maxi dress is now £745. It’s been reduced by 50 per cent at The Outnet 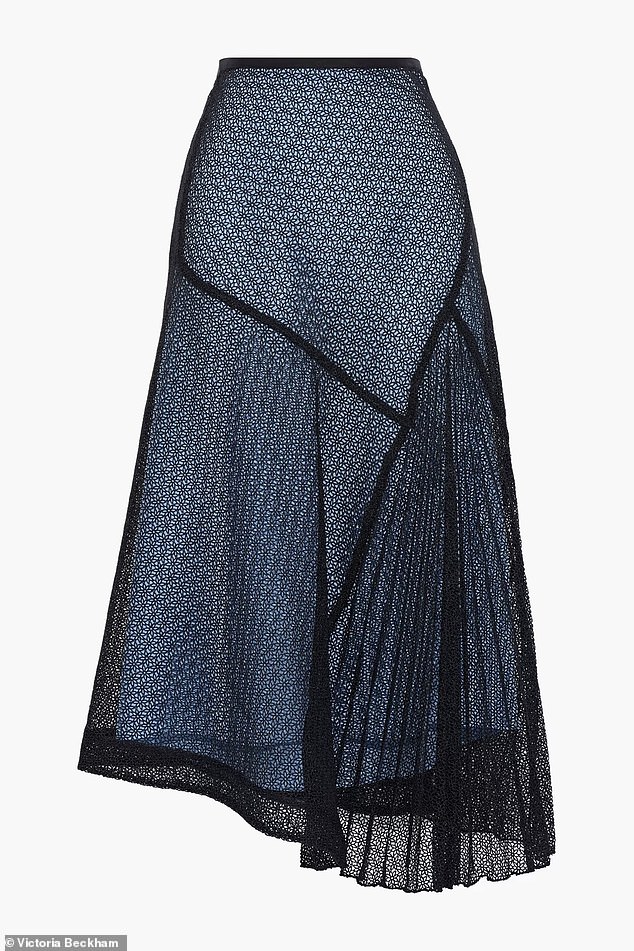 Costing £1,295 when first released by Victoria Beckham’s company, this asymmetric layered guipure lace and silk-charmeuse midi skirt is now just £388 after having a whopping 70 per cent slashed off the price 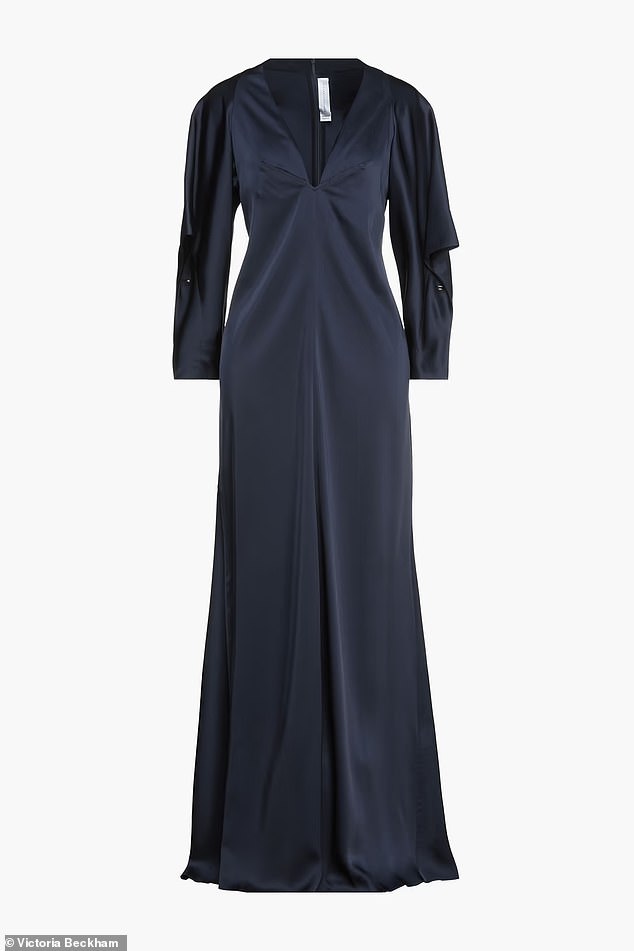 Showcasing class and style in equal measures, this navy draped satin gown costs £598. It was originally sold for £1,990 before being reduced by 70 per cent 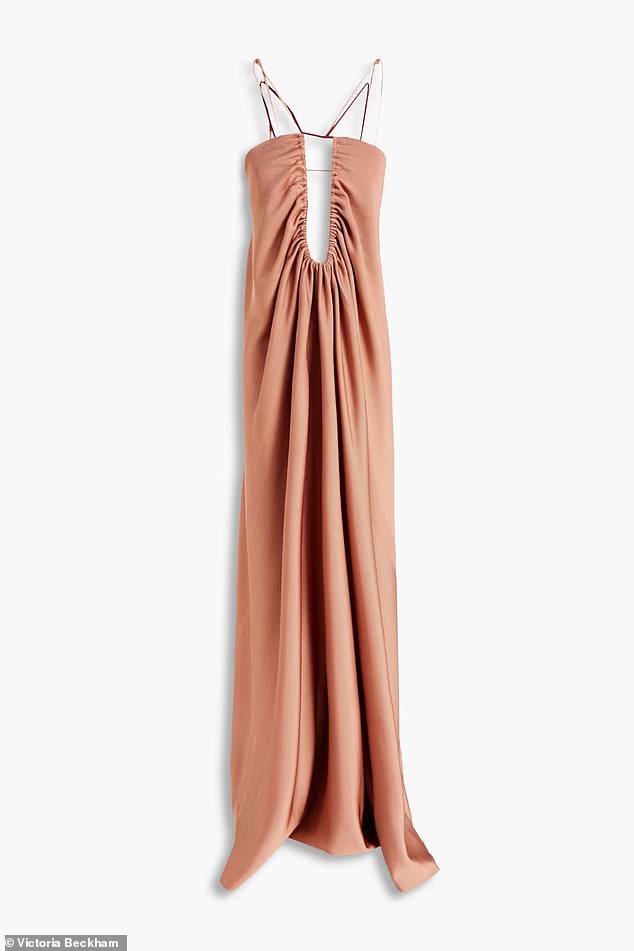 This cream cut-out ruched knitted maxi dress previously cost shoppers £1,390. But now fans of Victoria Beckham’s designs can purchase the look for £556 at The Outnet, saving 60 per cent 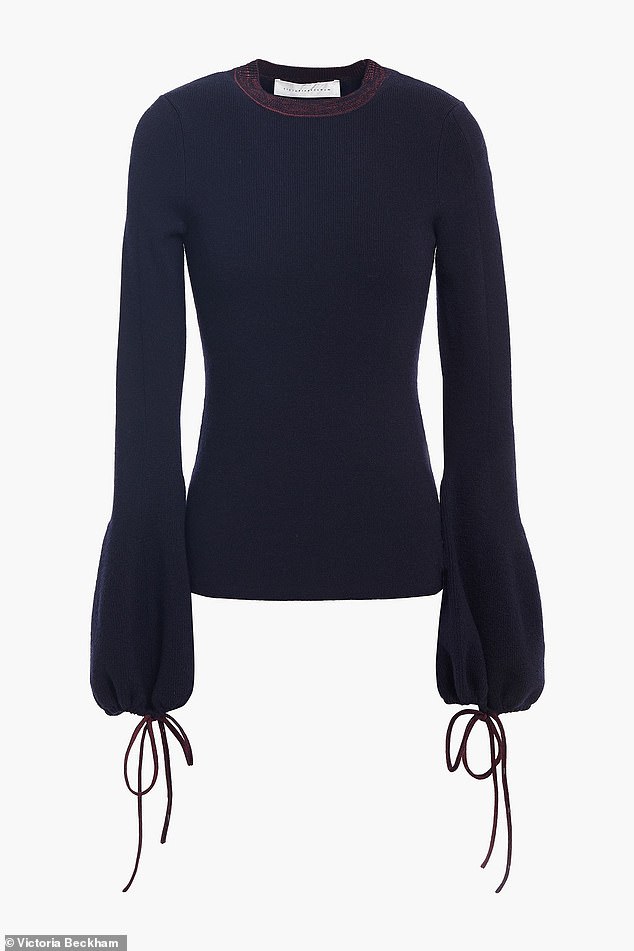 This ribbed wool-blend navy sweater has been discounted by 70 per cent, meaning it now costs £192 rather than £640 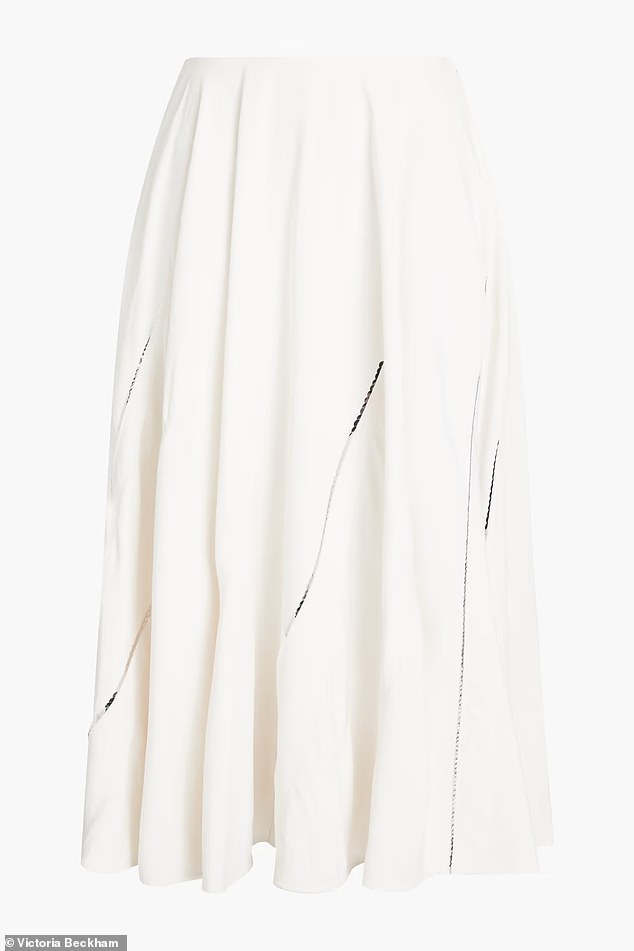 Adding a little sparkle to any look, this sequin-embellished white midi skirt was priced at £1,250 but has been reduced by 50 per cent off and now costs £625 when purchased at the luxury discount store 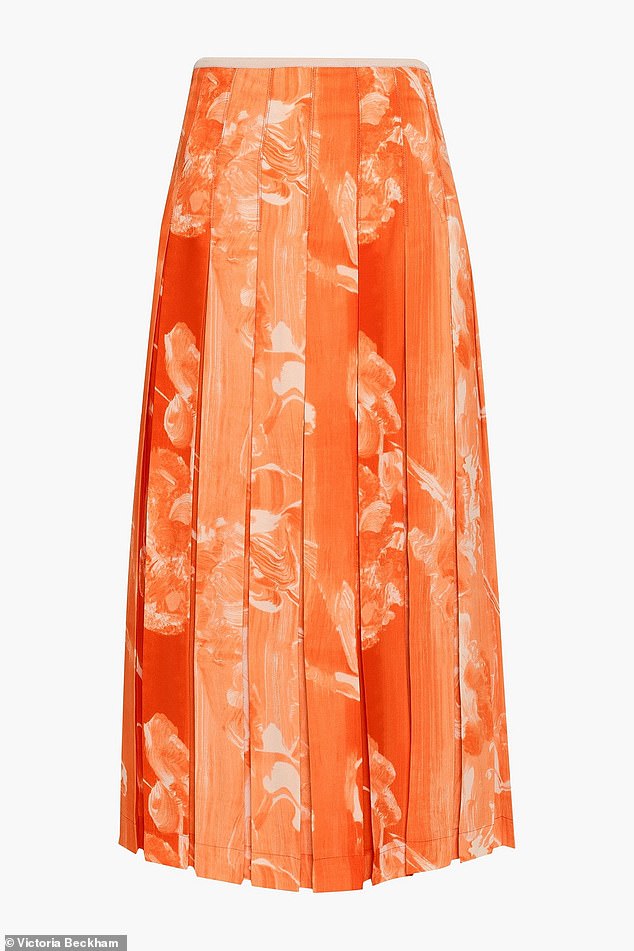 This orange pleated printed crepe midi skirt, available also in a light blue, is priced at £405 after being reduced by 70 per cent. It initially cost £1,350 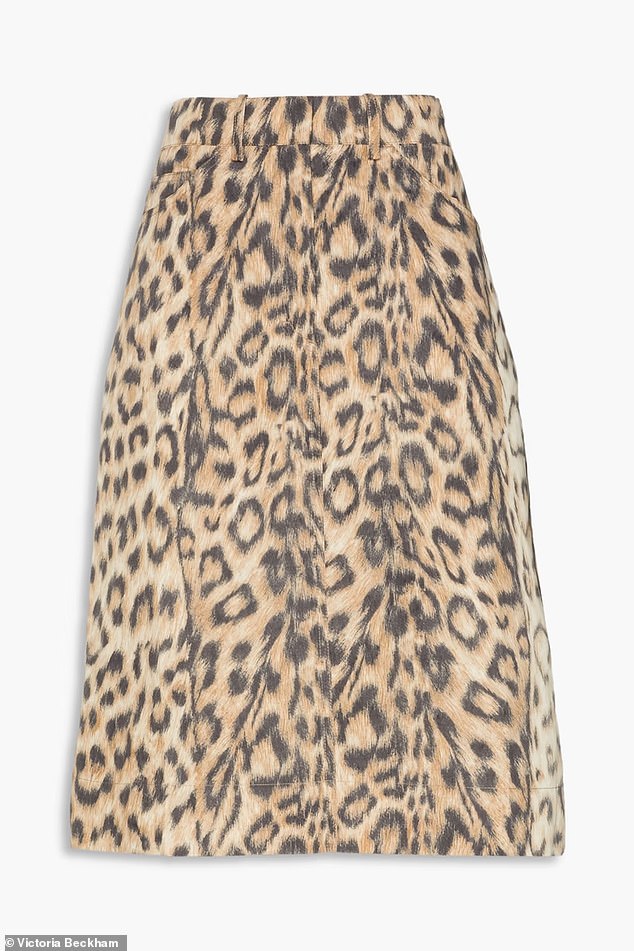 Originally retailed at £590 when first produced as part of the Victoria Beckham range, this leopard-print skirt is £265 at the Outnet, with a discount of 55 per cent 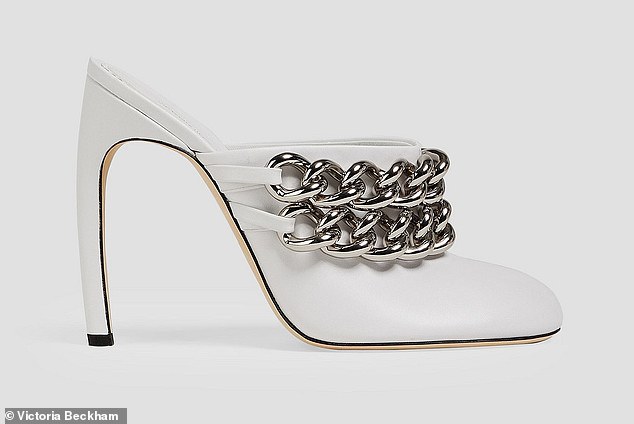 These chain-embellished leather mules, available in both red and white, cost £265, rather than £590. The shoes have been reduced by 55 per cent at the luxury discount store 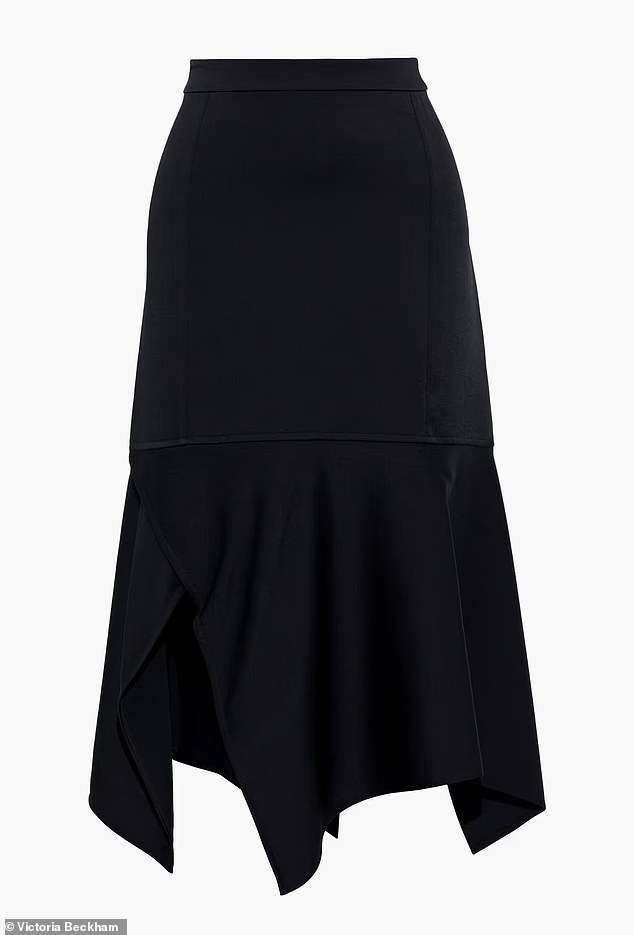 This asymmetric fluted satin-crepe midi skirt, available in both black and red, cost £850 when first on sale. It’s priced at £255 at the luxury discount store after being reduced by 70 per cent