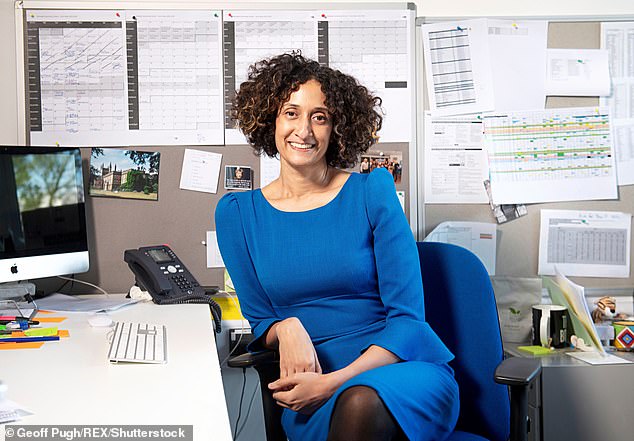 As teachers brace for a new term, Britain’s ‘strictest head’, who’s just achieved a 98% GCSE pass rate, shares her tips for classroom control – including being in bed before 10pm and punishing ‘messing around’

Britain’s self-styled ‘strictest head teacher’, whose non-selective West London academy saw 98 per cent of its students achieve 4+ (C) or more in last week’s GCSEs, says teachers across the UK can get similar results if they follow her advice.

Michaela Community School head Katherine Birbalsingh, who tweets prolifically as @Miss_Snuffy on Twitter, has seen exam results continue to soar, and puts the school’s success down to high expectations in a disciplined environment.

This week, she shared advice with teachers heading back to the classroom after the summer break, suggesting that early nights, learning to laugh with pupils and ‘sweating the small stuff’ on messing around could transform any school’s fortunes.

Katherine Birbalsingh is head of the Michaela Community School head in Wembley, which achieved a 98 per cent 4+ (C) pass rate in last week’s GCSEs

Pupils pictured getting their results at the school last week; Birbalsingh has attributed the non-selective state school’s success to high expectations and discipline 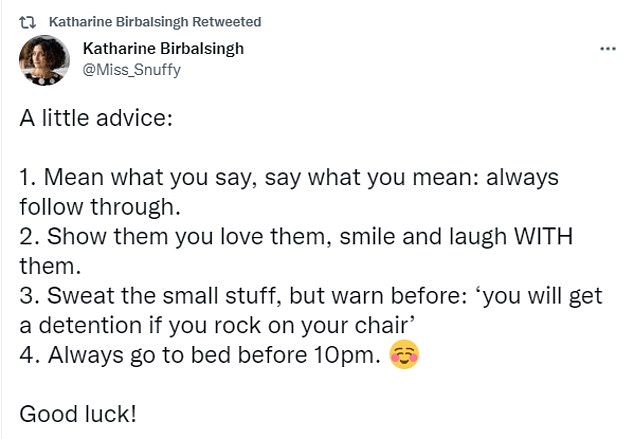 Birbalsingh, who landed a role as the Government’s social mobility tsar in 2021, says tough love is the key to high achievement.

After a follower asked for tips for a young teacher on how to take control of a classroom, the head replied with ‘a little advice’.

She wrote:  ‘1. Mean what you say, say what you mean: always follow through.

‘2. Show them you love them, smile and laugh WITH them.

‘3. Sweat the small stuff, but warn before: ‘you will get a detention if you rock on your chair’ 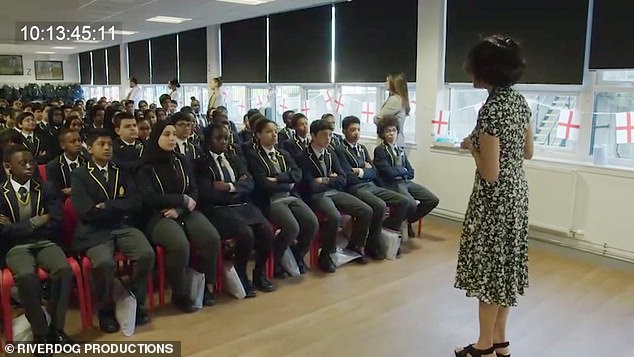 After the school published its latest GCSE results, the head clarified her stance on strictness, saying: ”An example of the mistake we make in thinking “strict and being in authority” is the same as “authoritarianism”.

‘Strict is immersed in love with high standards, not allowing kids to let themselves down. The adult must be in a position of authority to lead. Otherwise, chaos.’

Birbalsingh has been influential in Tory circles since winning a standing ovation at the Conservative Party conference after she delivered a damning indictment of ‘utterly chaotic’ state schools in 2010.

The former Marxist turned conservative was the surprise star when she laid bare an education system in which children were ‘lost in a sea of bureaucracy’. She won a CBE in 2020.

However, her outspokenness cost her her job as a deputy head teacher at the time. She went on to found the Michaela Community School in 2014.

Katharine Birbalsingh won a standing ovation at the Conservative Party conference after she delivered a damning indictment of ‘utterly chaotic’ state schools in 2010.

But soon afterwards she was sent home from her school in Camberwell, South London, after her speech, and lost her job as a deputy head teacher at the inner city academy.

The former Marxist turned conservative was the surprise star of the Tory conference when she laid bare an education system in which children were ‘lost in a sea of bureaucracy’. 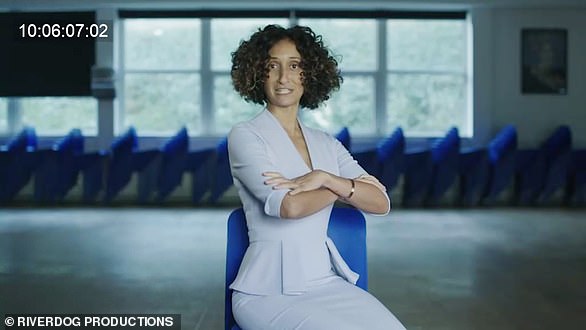 Birbalsingh has been criticised for her ‘tiger head’ techniques, including teaching incoming pupils in Year 7 how to sit properly on a classroom chair

She said schools were crippled by league tables, exams were dumbed down and ‘well meaning liberal’ teachers refused to discipline black children for fear of being called racist.

The Oxford University graduate also admitted that she had voted Conservative for the first time after a decade working in state schools having supported Labour.

She was born in New Zealand, the elder of two daughters of Frank Birbalsingh, an academic, and his wife, Norma, a nurse.

After leaving Oxford she began working in inner city schools in South London. After her sacking in 2010 she wrote several books before becoming head of Michaela Community School in Wembley, having founded the school in 2014 with Suella Braverman, who is now a Tory MP.

She was dubbed the ‘tiger headmistress’ for how she runs her school, where Year 7 pupils are taught how to sit properly on a chair.

New students are also shown how to walk to lessons quickly in single file and how to concentrate on the teacher and to instill good behaviour as soon as they arrive, while mobile phones are banned.

They are told to keep their shirts tucked in and to pick up crumbs from the floor after eating at a boot camp, which teaches pupils how to ‘behave in the Michaela way’.

In October 2021, she was appointed Chair of the Social Mobility Commission.

She has has never spoken publicly about her private life, other than about her parents, and is understood not to have any children saying previously she is ‘completely dedicated’ to her work.