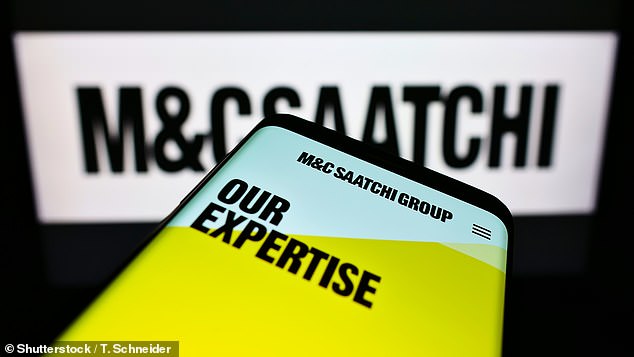 By Mike Sheen For This Is Money

M&C Saatchi’s first-half progress was limited by the ‘significant’ costs associated with being the target of two separate takeover attempts.

The advertising firm has this year been subject to hostile approaches from former board member Vin Murria and its investors were set to vote on a separate £310million bid from Next Fifteen Communications on 19 August, but this had to be delayed due to regulatory issues.

M&C’s Saatchi’s headline operating costs increased by 5.3 per cent to £111.3million in the six months to 30 June, largely as a result of a £9.5million hit from the ‘significant costs associated with the ongoing takeover approaches’.

Despite the uptick in costs, the group’s pre-tax profits shot up 52.4 per cent to £16million during the period as net revenues jumped 9.6 per cent to £129.4million.

Growth was primarily driven by a strong performance from M&C Saatchi’s ‘specialism’ businesses as a result of weakness in its key advertising and CRM divisions.

The group highlighted its global & social issues and sponsorship and talent divisions after delivering 29.7 and 20.2 per cent growth, respectively.

M&C Saatchi’s board reiterated its forecast of profit before tax of £31million for full-year 2022 and £41million in 2023. Dividends are expected to be reinstated at the end of the firm’s full financial year.

Boss Moray MacLennan said these were ‘results to be proud of under any circumstances’, particularly so ‘with the distraction of a hostile takeover’.

He added: ‘Looking forward, the counter-cyclical nature of key growth businesses, together with a global efficiency programme, gives confidence in our strong standalone future and the outlook for the remainder of 2022 and into 2023.

‘The plan is clear. Delivery is accelerating. Resilience proven.’

Despite this optimism, M&C Saatchi shares fell 7.5 per cent by afternoon trading to 150p, bringing year-to-date losses to 9.8 per cent.

Analysts at Peel Hunt said: ‘The share price has remained weak with its future in flux.

‘While our [profit before tax] for FY22E matches management forecasts, our PBT for FY23E is lower at £37million versus their £41million.

‘At this stage we are comfortable with our numbers given the ongoing uncertainty over advertising spend into next year. The timetable for shareholder voting will be announced in due course, but is not expected until early 4Q.’