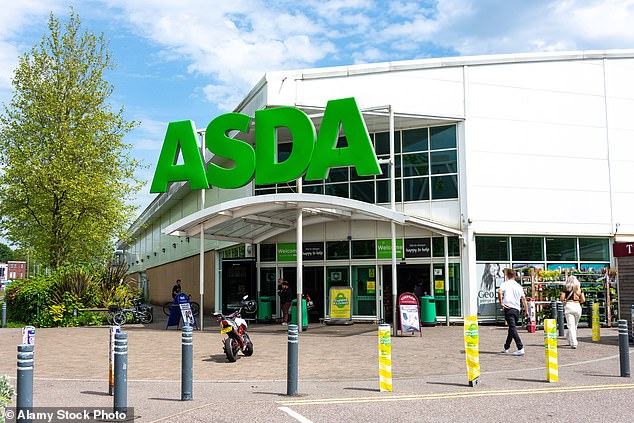 By Archie Mitchell For The Daily Mail

Asda suffered another blow after a ratings agency sounded the alarm over its mounting debt pile.

Fitch downgraded the outlook on the UK’s third-biggest supermarket from ‘stable’ to ‘negative’ after the business’s £600million swoop on Co-op’s petrol stations.

The ratings agency said the £200million borrowed to fund the takeover left Asda with higher debt levels than expected – adding that it would likely not return to a ‘stable’ level until 2024.

And the agency, which judges how well companies will be able to pay their debts, also slashed its forecast for Asda’s profit this year.

A spokesman said Asda will make an £850million profit this year, down from an earlier prediction of £1.1billion.

The cut comes after Asda saw profit fall by a quarter in the first half of the year. The supermarket group suffered a drop in sales as it pushed up prices faster than rivals.

Fitch’s downgrade is the latest setback for Asda since being snapped up for £6.8billion in 2020 by the billionaire Issa brothers and London private equity house TDR Capital.

The firm has been consistently losing market share and has been rocked by an exodus of senior management.

As well as the negative outlook, Fitch held its rating for Asda’s debt at ‘BB-minus’, which means that there is an ‘elevated’ risk of the business defaulting. Asda confirmed last month it would buy the petrol retail arm of Co-op in a deal valuing it at £600million.

It will take on the 130 forecourts, adding to the 320 it already owns.

The deal will accelerate Asda’s launch into the convenience market, which has so far eluded it.

The retailer opened its first On the Move store last year and will open its 50th this month.

Fitch said that this is a ‘positive’ as the convenience market is growing faster and comes with higher profit margins than larger supermarkets.

An Asda spokesman said: ‘We remain focused on our long-term strategy to become the UK’s number-two grocery retailer by delivering value to customers and giving them more opportunities to shop with us. The acquisition of the Co-op sites gives us a meaningful position in a growing convenience market.’