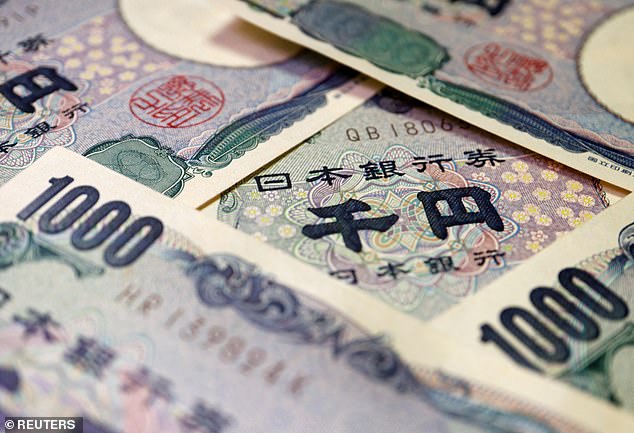 Currency market in turmoil as inflation wreaks havoc across the globe: Bank of Japan moves to prop up yen against rampant dollar

By John-paul Ford Rojas For The Daily Mail

Financial markets swung wildly yesterday as central banks around the world struggled to navigate a path through surging inflation and a rampant dollar.

Interest rates have been hiked from London and Washington to Zurich and Stockholm to keep a lid on spiralling prices – with US aggression sending the dollar soaring.

That yesterday prompted a rare intervention in the currency markets by Japan’s central bank – its first since 1998 – when it stepped in to buy up the battered yen.

Crisis: Japan’s central bank has stepped in to buy up the battered yen after the US Federal Reserve hiked rates by three-quarters of a percentage point for the third meeting in a row

The move came after the US Federal Reserve this week hiked rates by three-quarters of a percentage point for the third meeting in a row, and signalled there was more to come.

Hours later the Bank of Japan left its key interest rate at less than zero, and the yen fell to a 24-year-low against the dollar.

That pushed Japan into supporting its currency by using its dollar reserves to buy the yen, which sent the creaking currency up more than 2 per cent.

It was the latest example of the strain being put on the financial world by the dollar’s rampage.

The yen has fallen 19 per cent against the dollar this year while the pound has tumbled by 17 per cent and the euro is 13 per cent off.

Yesterday sterling – already near 37-year lows – was on the rack again. It dipped below $1.13 after the Bank of England hiked its main interest rate by 0.5 percentage points. UK bonds meanwhile suffered their biggest sell-off since March 2020.

Falling demand for the bonds –parcels of government debt – pushes up the yields sought by investors and makes public sector borrowing more expensive.

A deep divide has opened at the Bank of England over the best way to tackle red-hot inflation.

A three-way split emerged in the nine-strong Monetary Policy Committee (MPC) as officials disagreed over how much interest rates should rise. 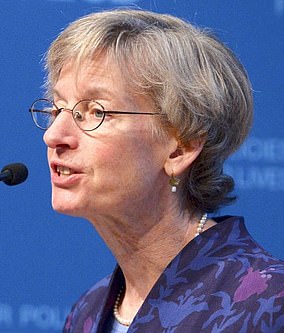 The Bank has been raising interest rates at an unprecedented speed since December in a bid to get a grip on inflation.

But it has been criticised for not doing enough as inflation soared to a 40-year high of 10.1 per cent in July before easing to 9.9 per cent in August.

The Bank was expected in many quarters to raise rates by 0.75 percentage points after big rises from the US Federal Reserve and European Central Bank this month.

Andrew Sentance, a former member of the MPC, said the committee ducked a 0.75 hike and took a soft option instead.

‘An official Bank Rate of 2.25 per cent will not curb UK inflation when it is around 10 per cent. It is a shame that the MPC don’t grasp this basic fact,’ he said.

Julian Jessop, economics fellow at think-tank the Institute of Economic Affairs, said it was ‘another missed opportunity to regain credibility’.

He noted the Bank was planning to reverse its enormous pandemic-era money-printing programme by offloading some Government bonds.

The MPC said that it would sell £80billion worth back to investors over the next 12 months, taking the total on its books down to £758billion.

Stock markets also endured a volatile session, with London’s FTSE 100 turning sharply higher before closing 1.1 per cent down. Paris and Frankfurt dipped by nearly 2 per cent. A super-strength dollar causes serious imbalances for the global economy.

Commodities such as oil that are priced in dollars become more expensive and countries with dollar-denominated debt piles find it harder to service them. 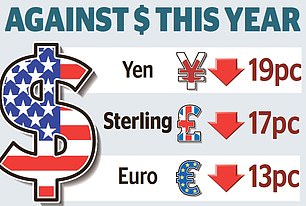 But intervening in markets is controversial and earlier this year US Treasury secretary Janet Yellen said it was warranted only in ‘rare and exceptional circumstances’.

In Britain, the Bank of England notoriously intervened to defend the pound during an ugly currency sell-off in 1992.

Seven years earlier there was coordinated action to weaken the super-strength dollar. There has been no talk of a repeat of that deal, known as the Plaza Accord.

Jane Foley, head of FX strategy at Rabobank, said such an agreement was unlikely until the Fed is confident that inflation is under control. ‘However the question of whether we need one is totally different,’ she added.