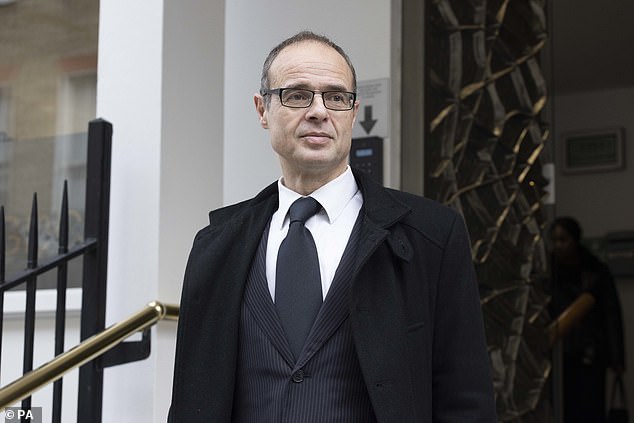 The dentist behind a TikTok ‘mewing’ craze that claims to change the shape of your jawline without surgery treated two children with ‘invasive and harmful’ mouth-altering treatments that are unproven, a tribunal heard today.

Dr Mike Mew could be struck off over ‘pejorative’ claims he tested out the treatment on a six-year-old boy and girl to align their teeth and lift their jawlines.

He even recommended an ‘expansion appliance’ be fitted on the boy when he was just two, the hearing was told.

Dr Mew is credited with popularising a way of restructuring your face called ‘mewing’, which involves closing your mouth, placing your tongue against your palette and pressing your molar teeth together.

Proponents claim the method can change your facial features and raise your jawline, alleviate jaw and mouth muscle pain and stop people snoring.

The trend, named after the doctor’s father Professor John Mew, has sparked a social media craze and 1.7billion videos about it have been viewed on TikTok alone.

Experts fear people who need surgery or orthodontic work will instead try to fix the issues by themselves.

Dr Mike Mew (pictured today) – the dentist behind the TikTok ‘mewing’ craze that claims to change the shape of your jawline without surgery – treated two children with ‘invasive and harmful’ mouth-altering treatments that are unproven, a tribunal heard today

A General Dental Council (GDC) hearing in Bloomsbury, London, today was told that between September 2013 and May 2019 Dr Mew provided advice and treatment to two children, referred to as Patient A and Patient B.

From the age of six, Patient A was advised to use upper and lower arch expansion appliances and wear neck gear to ‘gain a substantial increase in nasal capacity’, ‘improve the midface’, ‘change the swallowing pattern’ and ‘guide facial growth’.

Dr Mew believed this would allow more space for the teeth and tongue so ‘all the 32 teeth align naturally without the need for fixed braces’, the tribunal heard.

He also suggested Patient A underwent a lingual tongue-tie release, which he said would allow her to rest with her tongue on the roof of her mouth and strengthen the jaw.

According to tribunal papers, Dr Mew told the girl’s mother: ‘Most orthodontists have been told what we do is not evidence-based but few really have any idea of what we do.’

A photograph showed Patient A’s upper and lower teeth slanted forward, that she had recession of the lower front teeth and an unaligned upper tooth following the treatment, as well as an ulcer.

The tribunal heard a consultant was ‘so concerned’ by what he saw in the girl’s mouth and the ‘harm the appliances were doing’ that he referred Dr Mew to a council.

Stephen Vullo, representing Dr Mew, who denies the allegations, said Patient A’s mother was ‘entirely supportive’ of the treatment and she was ‘very happy’ with the outcome. 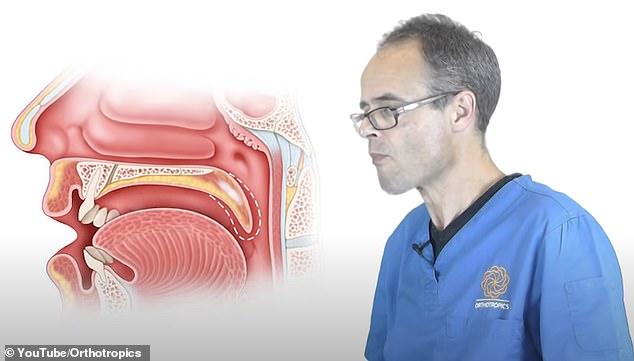 Dr Mew is credited with popularising a way of restructuring your face called ‘mewing’, which involves closing your mouth, placing your tongue against your palette and pressing your molar teeth together. He is pictured demonstrating the method 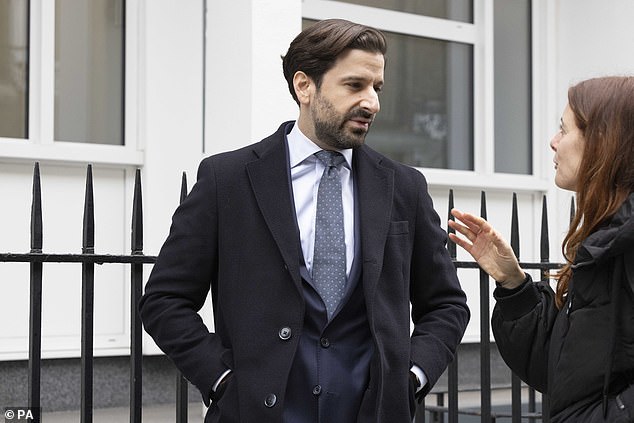 Stephen Vullo (pictured today), representing Dr Mew, who denies the allegations, stated: ‘There is evidence to support and further what he is saying.’

Mewing is a non-traditional health technique that claims to change the shape of your jawline without surgery has snowballed in popularity online.

In brief the of mewing principles involve:

Proponents claim the method can change your facial features and raise your jawline, alleviate jaw and mouth muscle pain and stop people snoring.

Patient B’s parents were recommended ‘the widening of both arches’, the ‘wearing of head gear at night’ and the potential ‘provision of a ‘Myobrace’ or ‘training appliance”.

The boy was found to have recession of the lower front teeth by another practitioner.

The tribunal was told the boy’s mother was initially a believer in the treatment but no longer believed it worked after it was performed on her son.

Dr Mew was accused of failing to ‘carry out appropriate monitoring’ of both children’s treatment and ‘ought to have known’ this was liable to cause harm.

The dentist is also accused of saying in a 2017 YouTube video ‘words to the effect that if you create enough tongue space and children use that tongue space, that can influence the facial growth and the craniofacial structure and expansion of the brain, expansion of the dental arches as well’.

He allegedly added: ‘If a patient walks into my office over the age of eight, they’re into an area where it’s going to be compromise, it depends how hard they work.

‘If someone comes in at the age of five or six I can almost get a complete correction.

‘If someone comes in younger I can give them advice on how they can correct themselves.’ 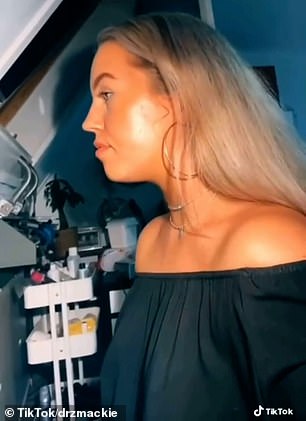 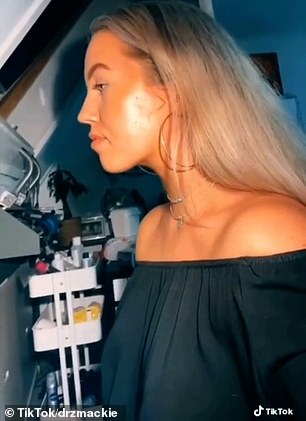 Dr Mew’s techniques have sparked an online trend of sharing results on social media platforms. Pictured: A TikToker is seen before (left) and after (right) she practises mewing by pressing her tongue against her palette 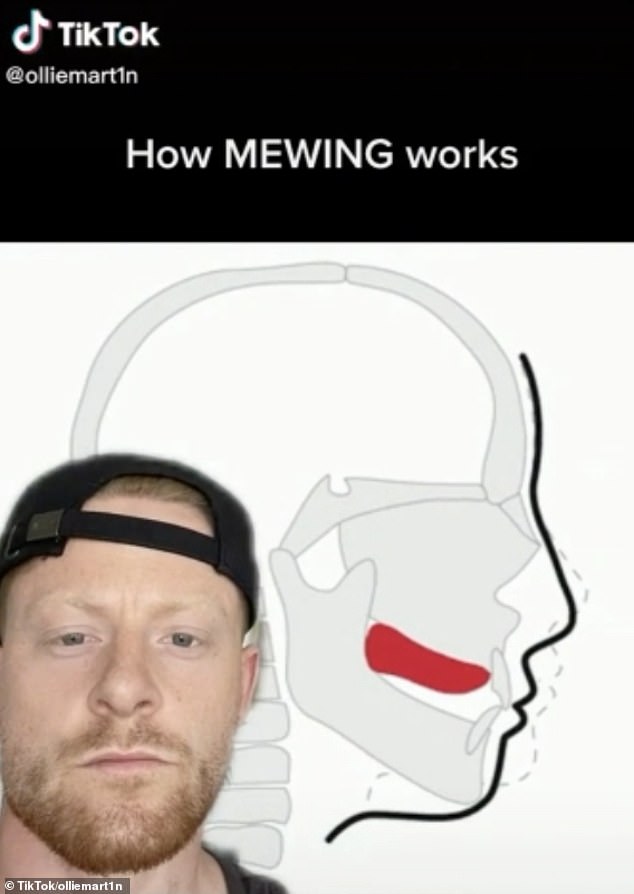 Another TikToker demonstrates how the so-called mewing method works

Ms Barnfather said the comments made by Dr Mew on his YouTube channel were ‘pejorative’ about orthodontists.

She said: ‘He believes that orthodontic therapy is erroneously based on the concept of genetic aetiology, what has been inherited, where he believes that the cranial facial form should be addressed with regards to environmental geology.

‘It’s his belief that environmental factors have led to faces having a down swing and in diagnosing what he calls cranial facial dystrophy.’

Ms Barnfather went on: ‘What he intends to do and what he claims to do is to invert the vertical growth of the face to horizontal growth, widening the face.

‘Thereby goes his theory, the theory devised by this father, cause structural changes of the face, cause an expansion of the underlying cranial facial form, including the nasal axillary complex, and create space in both dental arches so that the teeth align naturally.

‘In addition, he claims ENT (ear, nose and throat) conditions, such as obstructive sleep apnoea, is cured.’ 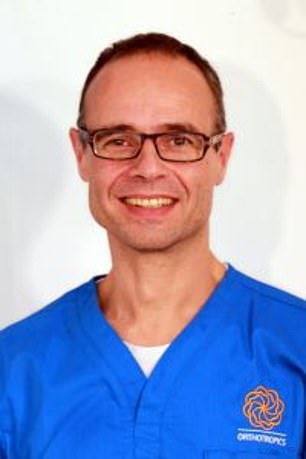 ‘His treatment is very protracted, expensive, uncomfortable and highly demanding of a child. Given the risks of the treatment it is alleged that it only be provided if there is an adequate evidence base to support it.’

‘Concerns were made about claims he made in a YouTube post which focused on the health and appearance of the face,’ she told the tribunal.

Those concerns were reportedly referred to the British Orthodontic Council.

She also noted how it is alleged by the GDC that Dr Mew’s treatment is ‘unproven.’

Ms Barnfather said: ‘The GDC allege you are not to have treated patients the way you did.’

She argued both children had ‘perfectly normal cranial facial development for their age’ before treatment took place.

Ms Barnfather argued the treatment was ‘not clinically indicated’ and Dr Mew ‘had no adequate objective evidence’ it would achieve its aims.

‘Dr Mew is perhaps the loudest supporter of what was called mewing in orthotropics,’ she continued.

‘He was originally asked when he made these claims to provide evidence in support of them. He didn’t consider it necessary for him to do so.

‘He then made a video in response to our request for evidence saying ‘it is a great shame, it is a terrible system but it is better than the alternatives. Don’t ask me to defend it, it is a negative argument.’ 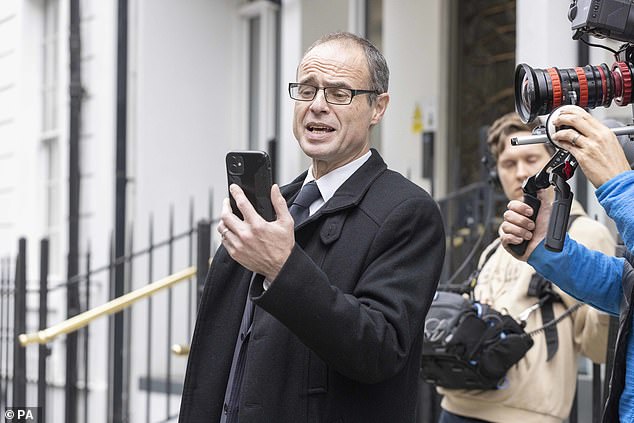 Dr Mew (pictured today) is now facing misconduct charges for treating people with his ‘orthotropic’ treatments, which he says could render many current orthodontic treatments unnecessary

He is now facing misconduct charges for treating people with his ‘orthotropic’ treatments, which he says could render many current orthodontic treatments unnecessary.

Orthotropics refers to a technique of changing the shape of the face by correcting the resting posture of the tongue and mouth.

He will argue there is ‘sufficient, objective evidence’ to back up his treatment, it was heard.

His attorney, Mr Vullo, stated: ‘There is evidence to support and further what he is saying.’

Mr Vullo also claimed the girl’s mother had been ‘entirely supportive’ of the treatment and was happy with it.

The tribunal has been adjourned until Monday next week.