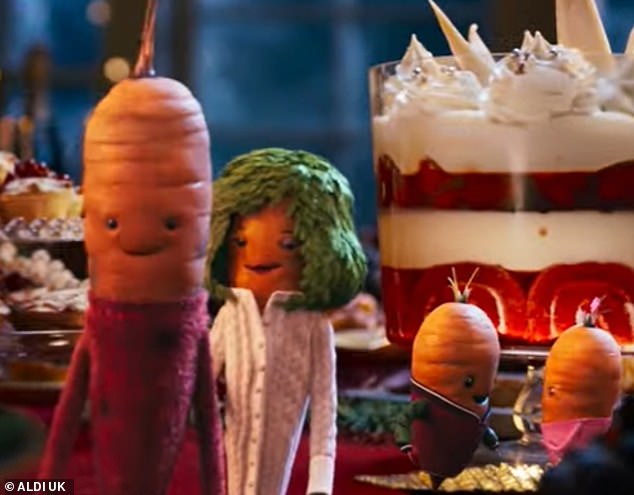 Aldi‘s website was overwhelmed after more than 76,000 shoppers tried to get their hands on merchandise of the store’s festive character, Kevin the Carrot.

The cuddly carrot toys were released this morning as part of the discount supermarket’s Christmas campaign featuring the character.

People desperately queued from 4am outside their local stores to purchase products from the new range with Aldi warning shoppers this year ‘once they’re gone, they’re gone’.

Kevin the Carrot has made a name for himself as Aldi’s Christmas mascot. He is pictured here with his wife Katie and children in this year’s festive TV advert

But who is Kevin the Carrot?

Kevin the Carrot rose to fame in 2016, as the undisputed star of the Aldi Christmas TV campaign and in doing so became a poster boy for root veg everywhere.

Little is known of Kevin’s background, but there has been suggestions over the years from the discount supermarket chain that he had humble beginnings and his great grandparents were Swedes.

But he first appeared as an unlikely action hero when he ended up tied to the antlers of one of Santa’s reindeer in the 2016 Christmas TV ad.

It was here that his catchphrase ‘Oh grate’ was born, and the following year he had a love interest. 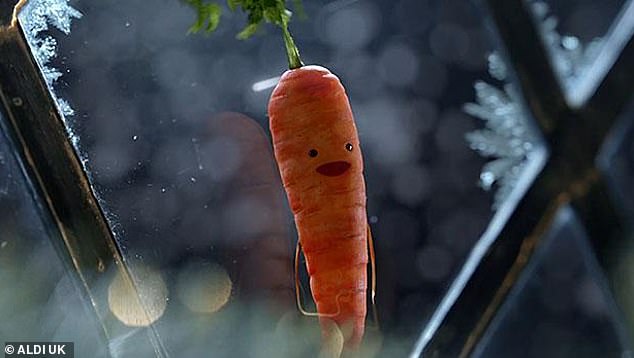 Kevin first rose to fame in 2016, (pictured) when he appeared in the Aldi Christmas TV ad as an unlikely hero when he ended up tied to the antlers of one of Santa’s reindeer

Katie was introduced, in 2017, when Kevin saved her from a fate of carrot and coriander soup, aboard a snow bound Orient Express.

Since then Kevin has had Aldi fans hooked, as they’ve followed his and Katie’s lives seeing them become parents.

Last year there was outcry when he didn’t appear in the trailer for the supermarket’s Christmas ad, but they needn’t have worried as he was there in the final version of ‘A Christmas Carrot,’ alongside new veggie pals Marcus Radishford, Tiny Tom and Peas and Goodwill. 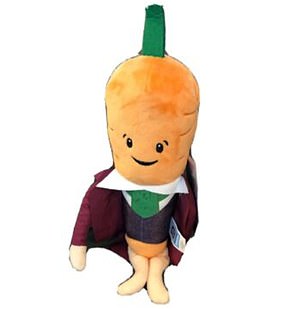 Kevin was introduced by Aldi’s ad agency McCann Manchester in 2016, who have continued to build on the emotional connection he as with consumers each year.

Culture and Brand expert Nick Ede said that the success of Kevin the Carrot has built on the ‘humour and charm that the advertising agency have come up with to create an inclusive, identifiable and cheeky character.’

This year’s advert sees Kevin star in a joyful vegetable version of Home Alone, with him replacing the character of Kevin McCallister as the hero who’s forced to spend the holidays by himself.

After his wife and their baby carrots leave for Paris without him, Kevin makes the most of his time at home, but is eventually scared when an intruder tries to get into his house.

In an homage to the original movie, Kevin hatches a plan to keep the mysterious invader at bay, including throwing a Christmas feast and lighting up the house with decorations.

Nick said: ‘What Aldi have cleverly done is to also create Kevin as a piece of merchandise, something that kids can take home and cuddle.

‘He becomes part of the family and is constantly identifiable as an Aldi product.’

This year has seen the retailer’s largest ever range of Kevin related products. 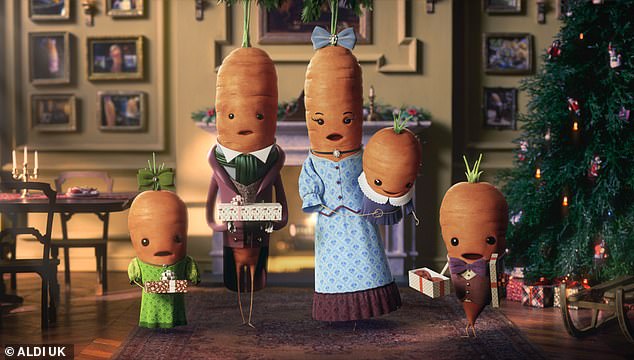 Kevin and his family appearing in the popular 2021 Aldi Christmas advert ‘A Christmas Carrot’, which was voted the most affective TV ad last year

With 23 products across the range fans have had to be quick, as in 2021 over half of the range sold out within 24 hours as carrot fever swept the nation with #KevinTheCarrot trending in 5th place on Twitter.

Kevin the Carrot also had sell out ranges in 2018,  2019 and 2020, with many toys being flogged on eBay for 100s of pounds more just hours after Aldi’s shelves were emptied.

Kevin and his family have seen so popular that plush toys were released earlier this year for the Jubilee celebrations.

This Christmas season, Aldi is offering an extended range of Kevin the Carrot products this year, such as Tree Plush Decorations.

Kevin Christmas Pyjamas will also be available in red or blue for ages one to 12.

‘Katie always loves seeing the pictures you share of me and my plush friends, so comment your best shots of us in the comments below, and we’ll give one lucky winner this year’s full collection for free! #KevinTheCarrot’ 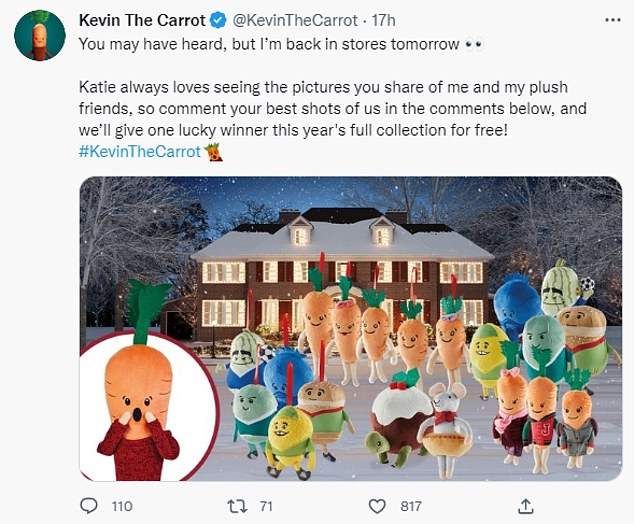 This year there are 23 products in the Kevin the Carrot merchandise range, which is the biggest ever and has already broken the Aldi website and had fans queueing since 4am

Nick explained: ‘Building a limited edition of toys available to customers online and in person creates demand, footfall, PR and sales which is a supermarket brand’s dream when there is so much competition out there.

‘This kind of brand extension created loyalty from customers and also allows the brand to build on the Kevin the Carrot story, creating anticipation year on year as to see what Kevin did next.’

Alongside his Twitter account Kevin also has numerous social media profiles including a fan group on Facebook called ‘Kevin the Carrot fans’, which has 10k followers.

And not only has his merchandise sky rocketed over the past few years, but Britons have even taken to sharing pictures of themselves with Kevin plush toys.

Aldi has now limited customers to the amount of Kevin merchandise they are able to buy.

In his first Christmas ad way back in 2016 Kevin helped increased Aldi’s sales by 15.1% and helped the supermarket to attract one million new shoppers

In 2021 Aldi issued a notice that customers could only buy a maximum of two Kevin toys to avoid disappointment.

An Aldi spokesperson said: ‘The demand for our Kevin the Carrot soft toys was extremely high and, as a result, customers were held in a queue to enter the website. This was to improve the customer experience on our website and we apologise for any inconvenience.’

What Kevin has done for Aldi

In his first Christmas ad way back in 2016 Kevin helped increased Aldi’s sales by 15.1% and helped the supermarket to attract one million new shoppers.

And last year market research company Kantar, combined consumer survey responses with facial recognition AI technology, to discover that Aldi’s advert was the most effective of the 24 festive adverts tested in 2021.

Nick added: ‘Aldi is a clear winner when it comes to festive cuteness.’

He notes that it hasn’t just gone down the same route that John Lewis has done so well – by using their advert as a platform to discuss social issues in the UK and link back to charities such as Action for Children.

In comparison, Kevin the Carrot is lighthearted and full of warmth, and with him breaking Aldi’s internet this morning it will be interesting to see what more he does for the supermarket this festive season.